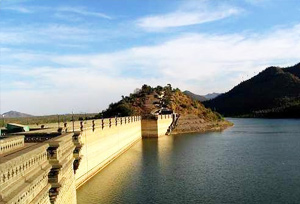 Located in the southern part of Karnataka, Chitrdunga is a small city that gets its name from Chitrakaldurga. Also known as Chitrakaldurgas and Chittaldurg, this picturesque ancient city has an umbrella-shaped lofty hill and sated with rocky hills, valleys and eminent rocks of several shapes. The city is also called as the Kallina Kote and the Stone Fortness. Famous for historical 'Chitradunga Fort', the region is nearly associated with the Mahabharata and the history of the fort lies from the period of Chalukyas empire and known for the myth of Onaka Obawa. The city unfolds a Pandora's box of picturesque epics, cultural legacies and historic landmarks.

It is believed that the city is linked to umpteen legends associated with it. The most popular legend is of Hidimba. As per the myth of Mahabharata, a cannibal Rakshasa – Hidimba and his sister Hidimbi held up on the hill here. Hidimba use to frighten everyone while Hidimbi was just opposite to him. When the Pandavas came with their mother Kunti to this place during their exile period, Bhima, one of the Panadavas had a duel with Hidimba in which he was killed by Bhim and peace returned to this area. The main part of Chitradurga is believed to be located on the boulders of this place that are known to be the oldest rock formations in the India. 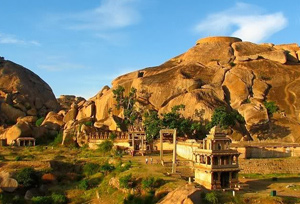 This place was, however ruled by a chieftain Timmana Nayaka who was under the Vijayanagara Empire. Well, this was just the beginning of the rule of Chitadurga as after him, his son named Obana Nayaka ruled this place during the year 1602 but very soon the rule was given to his adopted son as Obana Nayaka had no heirs. Then after, during the rule of Madakari Nayaka, the city of Chitrdurga was given to a group of Hyder Ali.

Apart from its legend, the city is also filled with many attractions that make the city a great of tourist interests like Chandravalli- an archaeological site that sits near a big lake and very famous for water sports and painted pottery and coins (Satavahana period). In a nutshell, Chitrdurga is not only a world heritage site, but also a famous tourist spot where you can relish the simplicity of the place and make your holiday a memorable one. 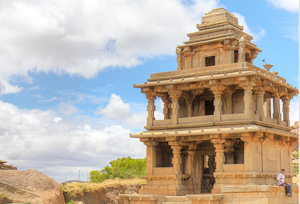 Chandravalli: Visit Chitradurga to view Chandravalli, which is positioned on the north easterly axis of the Chitradurga hill. It's a beautiful archaeological site that displays painted pottery, bricks and coins from the Satavahana period.

Sirigere: Come to explore Sirigere, which is distinguished for the Veershaiva Mutt of Taralabalu Jagadguru. Rests in the northwest of Chitradurga, this place is actually a small village where you will find various silk weaving industries.

Bruhan Mutt: Set at the distance of 3 km from Chitrdurga, Bruhan Mutt is also named as Sri.Murugarajendra Mutt, dedicated to a popular guru of the Veershaiva Community.

Chitradurga Fort: Visit one of the most popular attraction Chitradurga Fort in Chitrdurga, which stands regally at the top of a hill overlooking the view of the town. Also known as Yelu Suthina Kote, the fort features extensive walls, high watchtowers, bastions, etc. While on the other side, tourists can witness the beautiful carvings of a seven hooded cobra, a legendary twin headed bird Gandaberunda, while entering through the main entrance of the fort. After exploring this fort, you can also have a glimpse of some temples in the fort premises like Banashankari Temple, Ekanatheshware temple and Bombe Chaveadi Mandap.

Nayakanahatti Temple: Visit to this popular holy place in Chitrdurga where an annual yatra is conducted in the Phalgun month.

There are plenty of accommodation options in Chitradurga ranging from luxury hotels to deluxe hotels.

Here's the list of the few hotels in the city:

An annual festival in Chitrdurga is organized every year in Thipperudraswamy's Temple of Nayakanahatti (dedicated to sage) in the month of Phalgun (monsoon).

By Rail: Chitradurga has its own railhead on the branch line that starts from Chikjajur with limited train services. But, there are direct trains plying to Bangalore and weekly to Mumbai. Other major railhead is Chikjajur Junction, which is at the distance of 42.5 Km from Chitrdurga city.

By Bus: Chitradurga is located on the Bangalore-Pune National Highway and so you can take several KSRTC buses that ply from Bangalore (203 Km) to reach Chitradurga.