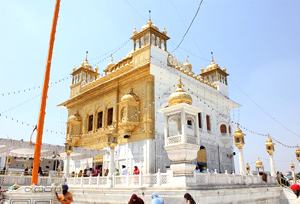 ‘Pilgrimage is the place that takes you to the serene world of spirituality. Taran Taran is best to exemplify it!’

Holy Taran Taran is counted among the most sacred places for the community of Sikhs. The peaceful city has diverse cultural, historical and religious edifices. It became a renowned city during the rule of the Sikh dynasty in the north Indian state of Punjab. In Taran Taran, visitors can see the ancient Gurudwaras well known for their Sikh scriptures.

It was founded by Guru Arjan Dev, who was the fifth Guru of Sikh community. Furthermore, Guru Arjan Dev also laid the key foundation of well-known Sri Tarn Taran Sahib Gurudwara. The holy town used to be a component of an eminent Bhangi dynasty and was ruled by a Sikh family from 1716 to 1810. During the partition of India (1947) the city became very significant. During the 1980s, at the time of Sikh rebellion, Taran Taran used to be a main center of Sikh activity. In the year of 2006, this city was announced as 19th districts of Punjab by then chief minister Amrindar Singh.

Sri Tarn Taran Sahib : It is a well-designed three storeyed structure situated in the heart of Taran Taran city. Approached through a double-storeyed arched entrance, it stands at the center of a marble - floored platform. The upper segment of the edifice is covered with sparkling gold plated sheets. Many devotees and visitors visit this Gurudwara every day and approximately one lac on every Amavasya.

Shri Lakeer Sahib: Gurudwara Lakeer Sahib is a chaste shrine of Sikhs, situated north of Taran Taran city. It is a well-known Gurudwara, built as a tribute of Shaheed Baba Deep Singh Ji, who was a great Sikh warrior and one of the most respected Sikh martyrs in history.

By Air: The nearest airport is at Amritsar, which is situated at a distance of 18 miles from Taran Taran.

By Road: Taran Taran railway station is well-connected with nearby cities and villages with the rail network.

By Train: Taran Taran is linked by roads to main locations like Amritsar, Kapurthala, Bhatinda, etc.