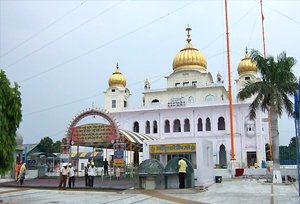 Famous for its Gurudwaras, Temples and Mosques, Sirhind is the place that beholds the emblems of different religion's mythological sagas.'

The Fatehgarh Sahib also called Sirhind is a prominent pilgrimage spot for Sikhs, located in Fatehgarh Sahib district of Punjab. It is also famous for a Muslim saint called Muzzajuddin Al Sani's tomb and a sanctified Sikh Gurudwara named a Fatehgarh Gurudwara. Therefore, due to its cultural, historical and religious significances, Sirhind is frequented by thousands of tourists or devotees every year.

The two young sons of Sikh Guru Gobind (Tenth Guru of Sikhs) were brutally killed at this Sirhind, during the rule of Wazir Khan. As per the Sikh system , the two sons of Guru were enclosed alive in a fort wall at Sirhind. However, after the demise of Gobind Singh, Banda Bahadur invaded Sirhind and assassinated Wazir Khan during the 1710. Furthermore, the booty later was donated among the deprived people and for the renovation work of holy places in Amritsar city. Due to its cruel history no Sikh king wanted to possess the city. Later on the king of Patiala Karam Singh built a Gurudwara in the memory of Guru's young sons. Additionally, King Karam Singh also changed the name of the place from Sirhind to new Fatehgarh Sahib.

Gurudwara Shaheed Ganj: It is located just half a kilometer from Gurudwara Fatehgarh Sahib. It honors the martyrdom of those Sikhs who were murdered by the cruel Mughals. It is said that forty cartloads of heads of martyr Sikhs, were cremated. 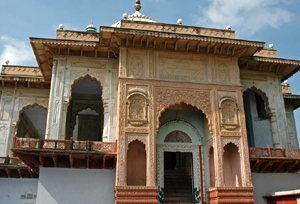 Rauza Sharif: On the road to Sirhind-Bassi Pathana, near Gurudwara Fatehgarh Sahib is the wonderful Rauza or Dargah of Sheikh Ahmad Faruqi Sirhindi who was commonly known as Mujaddid Alf-Isfani, lived in the reigns of Akbar and Jahangir from 1563-1624.

Tomb of Nabis at Bras: The tomb of Nabis is situated at a distance of 20 kms from Fatehgarh Sahib headquarters . It is believed thirteen Nabis (favourites of Allah) are buried here.

Das Nami Akhara: This religious place is located near the Dargah of Baba Salar Pir. Das Nami Akhara commemorates the memory of Baba Hardit Giri, who was a great saint. Yearly congregations are held here for three days i.e. on Friday, Saturday and Sunday after Diwali. On Monday, a BHANDARA is held on a large scale and Preachers convey religious sermons to the people.

Mata Chakreshwari Devi Jain Temple: Mata Chakreshvri Devi Jain Temple is said to be 1000 years old and is located in village Attewali on Sirhind-Chandigarh Road . The divine powers of the Malta Chakreshwari Devi have been illustrated very nicely on one of the walls of the temple, through excellent glass work in a magnificent style. The fountain of water has been transformed into a small well and big temple of Lord Adinath is under construction on this place. Even now, the water of this tank is held blessed by the devotees and they carry home to preserve the same considering it as sacred as the water of Ganga.

Sant Namdev Temple at Bassi Pathana: Sant Namdev, a proponent of Bhakti Marg (way to worship God), stayed here for a significant period and preached Bhakti Marg to the people of the region. He moved from this place to other areas of the Punjab for spreading his spiritual messages.

Mosque of Sadhana Kasai at Sirhind: This mosque is located in the northwest of Sirhind-Ropar Railway Line, close to level crossing. The mosque is under the power of Archaeology Department. The mosque is made up of `Sirhindi Bricks' and its paintings are of `T' art.

By Air: Chandigarh is the nearest airport, located 44 km distance from Sirhind.

By Road: Sirhind is well linked with other towns of the state by road.

By Train: Sirhind junior railway station is the nearest railhead that joins the city to other main cities.