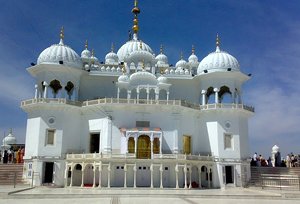 Anandpur Sahib, the Holy City of Bliss, is about 95 km north-west of Chandigarh, Punjab. The city is located in the Rupnagar district (Roper) in the state of Punjab, India. It is nestled between the Shivalik hills in the east and Sutlej River at far west. Furthermore, this place is surrounded with vast green stretch that delivers calmness and spiritualism in its aroma. It is considered as the holiest place of Sikh religion where Shiri Guru Gobind Singh Ji spent 25 years of his life teaching and guiding his disciplines.

"When the devotees visit the place they reach the Guru's Abode and blesses", this belief is observed by thousands of devotees visiting the shrine from the past many centuries.

Gurudwara Takht Sri Kesgarh Sahib: This is the main hub at Anandpur Sahib. This place is the birthplace of the Khalsa. Among the Five Temporal Authorities (Five Takhts), this place holds an esteemed value in the religion of Sikhism. The Gurudwara is located on the hill where Shri Guru Gobind Singh Ji used to hold congregations. 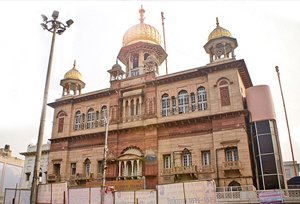 November 11, 1675, Shri Guru Teg Bahadur Sahib Ji grasped martyrdom in Delhi. His behead was cremated at this place. People also believe that the oldest structure in the shrine is the central pedestal in the Gurudwara.

Gurudwara Guru Ka Mahal: In Anandpur Sahib, this is the first structure and building of Chak Nanaki. This place is worshiped as the 'Guru ka Mahal' complex. Along with Shri Guru Gobind Singh Ji, his disciples used to live here.

Gurudwara Bhora Sahib: It is the residence of Shri Guru Teg Bahadur Sahib Ji. This place has an underground room which was used for meditation and composing hymns.

Gurudwara Akal Bunga Sahib: This is situated opposite to the Gurudwara Sis Ganj Sahib. Shri Guru Gobind Singh Ji used to address the Sikhs to struggle for freedom and faith. He also asked people to stay prepared to fight tyranny and injustice.

Hola Mohalla, is the occasion when the whole area is accomplished with martial spirit. This is the correct time to visit the place. 10th Guru, Shri Guru Gobind Singh Ji declared that the festival of colors 'Holi' would be celebrated as Hola Mohalla. During the occasion, his people used to display the martial spirit to the fellow citizens. It is estimated that 100,000 devotees from all over the country visit the place every year during the festival.

During the three-day festivals, all the Gurudwaras are decorated, and community conferences followed by religious functions. Moreover, a huge procession of Nihangs is organized where people dress up in traditional outfit and carry weapons. On the third day, the possession pass through headquarter of Nihangs, the market, and reaches the fort of Holgarh. Holgarh is the place where Shri Guru Gobind Singh Ji used to celebrate all festivals and fairs. The occasion also includes martial games, horse riding, tent pegging, sword wielding and so on. This is the time when Anandpur Sahib becomes live and enticing. March is the best time to visit the Holy City of Bliss.

By Air: The closest airport to Anandpur Sahib is situated in Chandigarh, just 35 miles away.

By Train: The nearest railheads are situated in Nangal and Ambala. One can hire a taxi from the station to make it to the sacred city of bliss.

By Road: Regular Bus services from Delhi and Chandigarh are available to Anandpur Sahib.