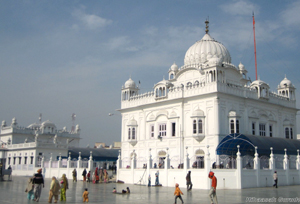 'Goindwal Sahib - The axis of Sikhism', opens the gateway of emancipation for the pilgrims who come here to get lost in the divine environment of this sanctified pilgrimage'

Goindwal Sahib, the first Sikh pilgrimage, is located in Taran Taran district of Punjab. In the 16th century, it became an imperative center for Sikhism during the Guruship of Guru Amar Das. Goindwal is situated on the bank of the river Beas and is one of the main centers of small scale industries in Taran Taran district.

Guru Amar Das , the third Guru, stayed in Goindwal for 33 years. Here, he established a new center for preaching Sikhism. Some devout believe that by reciting Japji Sahib (the divine words revealed to Guru Nanak Dev) at each of the 84 steps after taking a bath in the Baoli situated in Goindwal, provides Moksha (salvation). Goindwal is the place where Guru Amar Das met Guru Ram Das. Guru Arjan Dev was also born here on 15 April 1563.

It is a prime pilgrimage tourism center today.

Goindwal Sahib is the spot where the early East west highway crossed the River Beas. This ferry site became an important transit point when Sher Shah Suri renovated the highway. This renovation led one Gonda or Goinda, a Marvaha Khatri Trader, to establish a habitat at the western side of the ferry. Let down in his endeavor by natural disasters which Gonda attributed to the evil spirits, he went to Khadur to seek Guru Angad's blessings. Guru Angad deputed his loyal disciple Guru Amar Das to help Gonda. Amar Das knew the track very well because he had been carrying the river water from this place to Khadur for his Guru Angad Ji's ablutions. That's how Amar Das Ji laid the foundation of a village, named after Goinda. After being appointed as Guru, Amar Das Ji shifted from Khadur to Goindwal in 1552. He then commenced the digging of a Baoli in Goindwal. This resulted in the construction of a well with steps descending downwards to water level, which attracted pilgrims from all parts of the country. At the time of Guru Amar Das, Goindwal also became the center of a yearly fair on the occasion of Baisakhi. After Guru Amar Das, his successor Guru Ram Das made Amritsar his permanent seat but still, the devotees continued to visit Goindwal to plunge into the holy Baoli and pay the worship at other local holy places.

Best Time To Visit: One can visit Goindwal Sahib throughout the year. However, June to November is the best time to visit as during this period one can enjoy the festival celebrations here.
Population: 6845
Altitude: 225 meters above sea level.
STD code: 01859
Language: Punjabi

All the holy places in Goindwal Sahib are controlled by the Shiromani Gurdwara Parbandhak Committee. Major Attractions are: 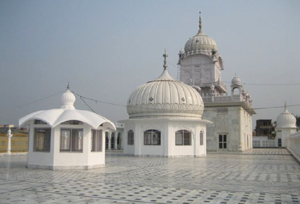 Sri Baoli Sahib: Gurudwara Shri Baoli Sahib is located in the Goindwal Sahib in Tarn Taran Distt. This is the first Sikh pilgrimage. It was built under the command of Shri Guru Amar Das Ji in the year 1616 AD. He then blessed this sacred place and commanded that the person who will do 84 paath of Japji Sahib, with a pure heart, shall get the salvation. Guru Amar Das Ji himself did the Seva of Gurudwara Baoli Sahib.

Thara Sahib Sri Guru Amar Das Ji: It is a marble lined platform, with a pinnacled cover of white marble supported on cylindrical columns, at the entry to Sri Baoli Sahib. This place marks the site where Guru Amar Das used to sit overseeing the digging of the Baoli.

Sri Darbar Sahib: Next to Sri Baoli Sahib, Shri Darbar Sahib is a square hall with a sanctum in the center where the Guru Granth Sahib is seated. The congregations take place in this hall everyday.

Killi Sahib: Killi Sahib is a small wooden peg, now covered with a silver case, which is fixed in the front wall of Sri Chubara Sahib on the exterior.

Joti Jot Asthan Patshah: It is a small marbled pavilion adjoining Guriai Asthan and was built on the site of the room where Guru Amar Das died on 1 September 1574. Exactly seven years later, Guru Ram Das also died in that room.

Janam Asthan Sri Guru Arjan Dev Ji: It is a room where Guru Arjan took birth. The holy Guru Granth Sahib is seated in this room.

By Road: Goindwal Sahib is well linked with the major cities like Ludhiana and Jalandhar.

By Train: The railhead is Goindwal Sahib Railway Station.

By Air: Nearest airport is Raja Sansi Airport, Amritsar. One can take a taxi from there to arrive at the desired destination.