Moodbidri is a small temple town in the state of Karnataka. The Saavira Kambada temple is a Jain temple located in Moodbidri. This temple is also popularly known as Chandranatha Temple. The town of Moodbidri is considered to have total of about eighteen Jain Temples. The finest temple among all the eighteen Jain temples is the Saavira Kambada temple. This temple was built in the year of 1430 by Devaraya Wodeyar, the ruler of Vijayanagar. Later on some renovation and additions were done in the year of 1962.The temple is famous because of the thousand remarkable pillars that form an integral part of the shrine. The construction took almost thirty one years to get completed and approximately around nine crores rupees were spent to build it. 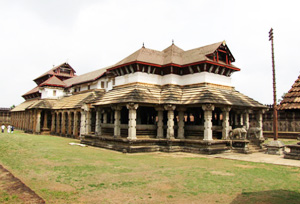 The total construction of the temple took place in three different phases. In the first phase the sanctum sanctorum was constructed. This contained the idol of Chandranath, which is eight feet tall in height. In the second phase the magnificent prayer hall was built where a number of beautifully carved pillars were placed. In the last phase the construction of the Manasthamba took place. It is sixty foot tall and is a centre piece of the temple.

The Saavira Kambada temple also contains many mantapas,which are supported by the pillars. Carved out of granite, these pillars have unique figures engraved that make them different from the others. There are stone chandeliers in the shrine that reveal the architectural skills of the craftsmen. The architecture of the temple shows Jains’ eye for details and the interaction and exchange of culture among man and nature.