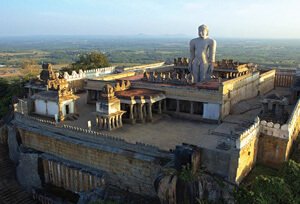 At a distance of around 158 kms of Bengaluru and 83 kms of Mysore, there is a town situated in Karnataka known as the city of ponds and temples – Shravanabelagola. It is the most renowned Jain pilgrimage in South India. This place is one of the eminent heritage sites in Karnataka.

The place Shravanabelagola is famous for its Gomateshwara Temple also known as Bahubali Temple. Shravanabelagola has two hills, Vindhyagiri and Chandragiri. The 58 feet tall monolithic statue of Bahubali is located on Vindhyagiri Hill. The base of the statue has an inscription which praises the king who funded the effort and his general, Chavundaraya, who erected the statue for his mother. The Bahubali statue is both magnificent and munificent. Magnificent in form, it is a 57 feet high monolithic statue built in around 983 A.D. The Gomateshwara Statue can be viewed at a distance of 30 km.

According to the Jain texts, Bahubali or Gomateshwara was the second son of first Tirthankara of Jains, Rishabdeva or Adinath. It is said that Adinath had in total 100 sons. When Rishabdev left his kingdom, a tussle took place between two of his sons – Bharatha and Bahubali for the empire. Although Bahubali defeated Bharatha in the combat but he was not happy due to the sourness between him and his brother. Thus, he decided to give his kingdom to Bharatha and went to achieve Kevala Jnana (Absolute Knowledge).

The statue is referred to as ‘The statue of Gomateshwar’ by the Kannada people of Karnataka and the same is referred to as Bahubali by the Jains. Every twelve years, at the Shravanabelagola hill, thousands of devotees, tourists come to celebrate the ‘Mahamastakabhisheka festival’. Devotees sprinkle water on the statue from a high platform. After water is sprinkled, the statue is bathed with tons of milk, sugarcane juice, and the saffron flowers paste. The next Mahamastakabhisheka festival is expected to be held in the year 2030.

In the year 2007, this marvelous statue was conferred with the top spot among the country’s seven wonders.