When we talk about the exotic lakes, no one can beat the city of Udaipur which is why it is called the “City Of Lakes”. Udaipur is named for its azure lakes, splendid palaces, and vibrant nightlife with those mouthwatering street foods. The city is located in the spectacular lake and encircled by the Aravalli Hills on all sides. And if you fancy luxury then Udaipur is a must-visit place for you.

Udaipur is one of the most historical destinations in India. All those captivating and magnificent forts and palaces will offer you a trip to our ancient era. The people there have been painting their walls in unique patterns over the ages. The whole city gives ancient or historical vibes. Today we are here to discuss some of the top historical destinations in Udaipur. So, without further ado let’s get into the topic. 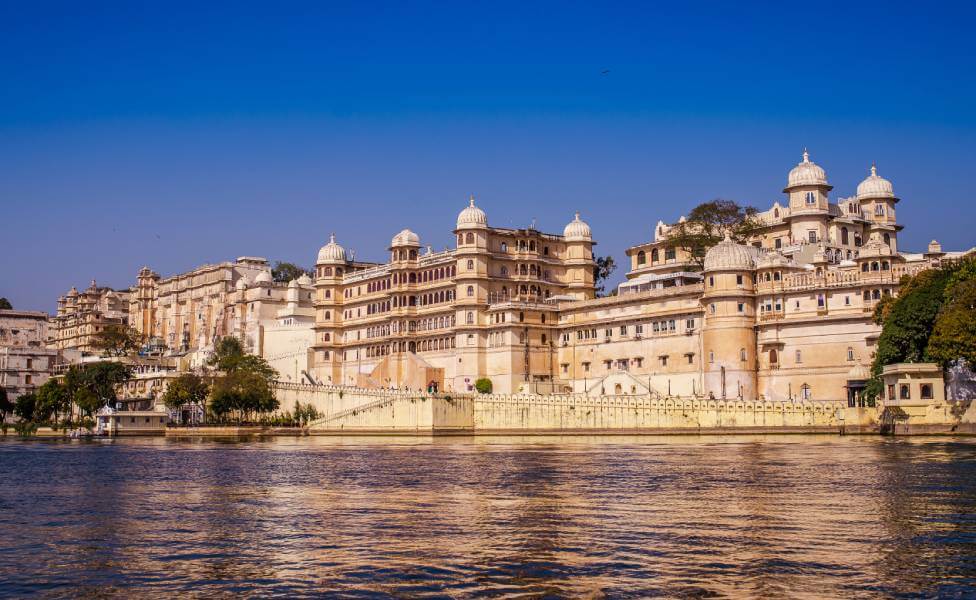 When we think of Udaipur the first thought which comes to our mind is the wonders of archaeology in the City Palace. The sumptuous structure, lying on the shores of Lake Pichola is a cultural representation of our Historical India with some tinge of Chinese influence in it. As Udaipur has become one of the most visited destinations in Rajasthan of course the City Palace has gained more popularity since then.

The construction of the Palace began in 1559, although because of the detailed craftsman it lasted longer than expected. The palace possesses a number of beautiful sites like blooming gardens and historical courtyards. If you are planning a trip to Udaipur, exploring City Palace becomes mandatory for your personal satisfaction. 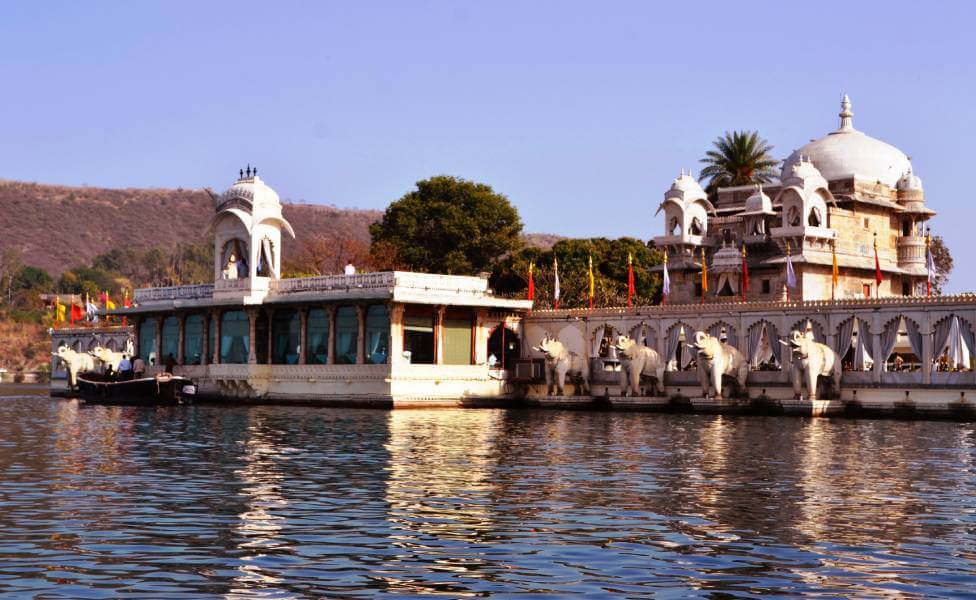 The Jag Mandir, a magnificent temple that represents the religious and cultural history of India is situated in Udaipur. It is located on the sparkling waters of Lake Pichola and you will have to take an exhilarating ride to this magnificent temple. You will be able to witness many species of fish under the shining sun.

You will see a row of enormous and magnificent elephants made up of rocks and the Gol Mahal which is carved in Blue Stone. There is a tower too from the 17th century which will add to your sightseeing experience. Pavilions like Kunwar Pada ka Mahal, Zenana Mahal, and Bara Patharon ka Mahal are havens for archaeologists here who love to research historical carvings. We would recommend taking a stroll over the gardens which are dotted with roses, frangipani trees, jasmine flowers, and palm trees. 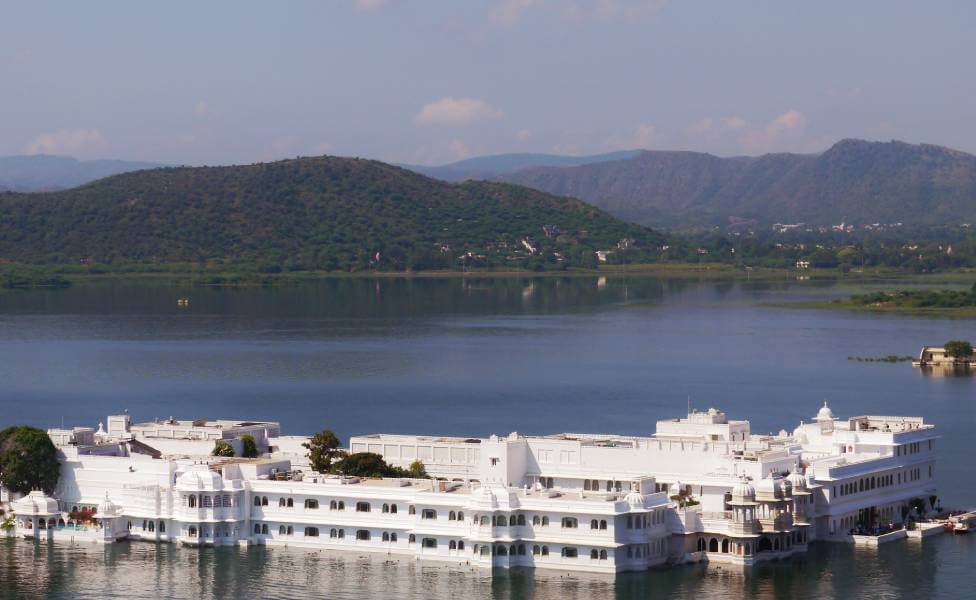 If you are all worn out from traveling and need some time to relax before continuing your travel, we would recommend experiencing this exclusive and opulent hotel. The palace is magnificent with breathtaking beauty which offers majestic views of many ancient monuments like Machala Hills, City Palace, and Jag Mandir.

The tale starts with Maharana Jagat Singh II, the son of Maharana Sangram Singh II who asked for a stay in the summer palace with his female friends but his father rejected his request and taunted her to build his own pleasure castle. And he actually built a castle currently known as “Jag Niwas” or “Lake Palace”. Because of many international movies, the location has become famous at a global level and has become one of the most visited places in Udaipur.

Because of many international movies suit, the location has become famous at a global level and has become one of the most visited places in Udaipur. 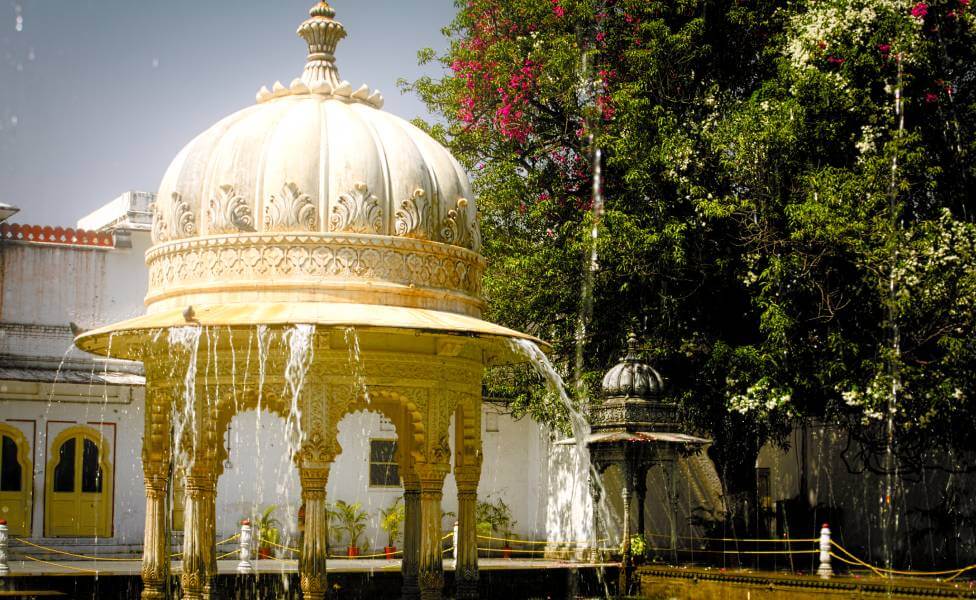 Sahelion Ki Bari, as from the name you can guess the influence of females here. It’s a beautiful Palace built by king Maharana Sangram Singh for his queen and her 48 maidens. The awe-aspiring beauty of this place is nothing less than the Taj Mahal. The legendary garden here will calm your soul with its fresh air and environment. You can opt for relaxing here after a busy day of travel. This palace which was constructed in the presence of the former Maharaja for his beautiful queen is a treasure in our historical monuments. 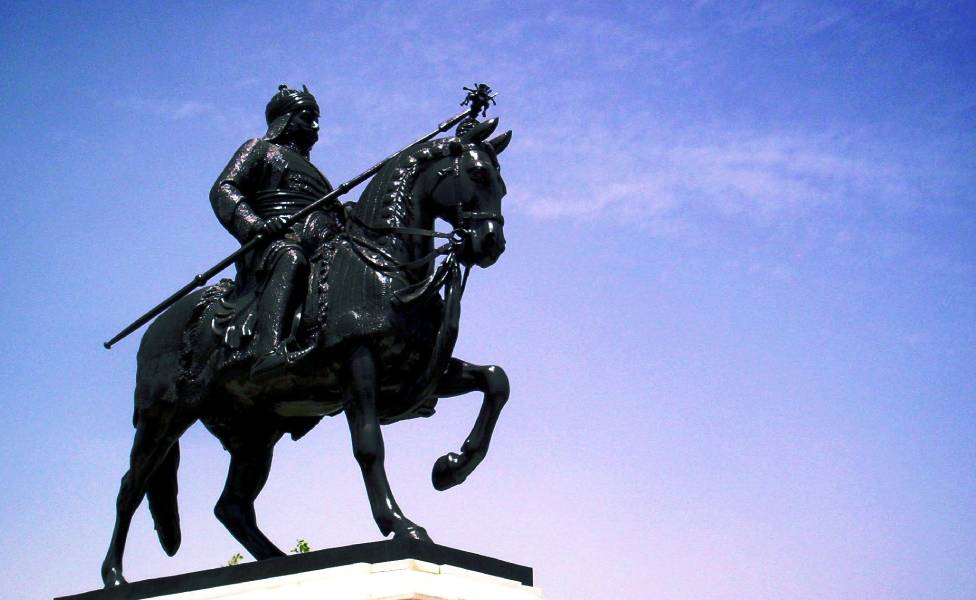 One of the greatest warriors in Indian history, Maharana Pratap is renowned for his valour and bravery. Between 1572 and 1597, or around 27 years, Pratap ruled over Udaipur. The Battle of Haldighati was one of Pratap Singh of the Sisodia Rajput dynasty’s most illustrious engagements. The Memorial was erected as a tribute to his bravery and valour. Therefore, a life-sized bronze statue of Maharana Pratap and his devoted steed, Chetak, is created.

The Memorial, which was constructed in the 18th century, is among the biggest tributes Maharana Bhagwat Singh ever built for Maharana Pratap. A life-sized bronze statue of Maharana Pratap riding his obedient horse, Chetak, is one of the Memorial’s most exciting attractions. The sculpture stands 11 feet tall and weighs over 70 tonnes. Kilometres away, people can see the sculpture. 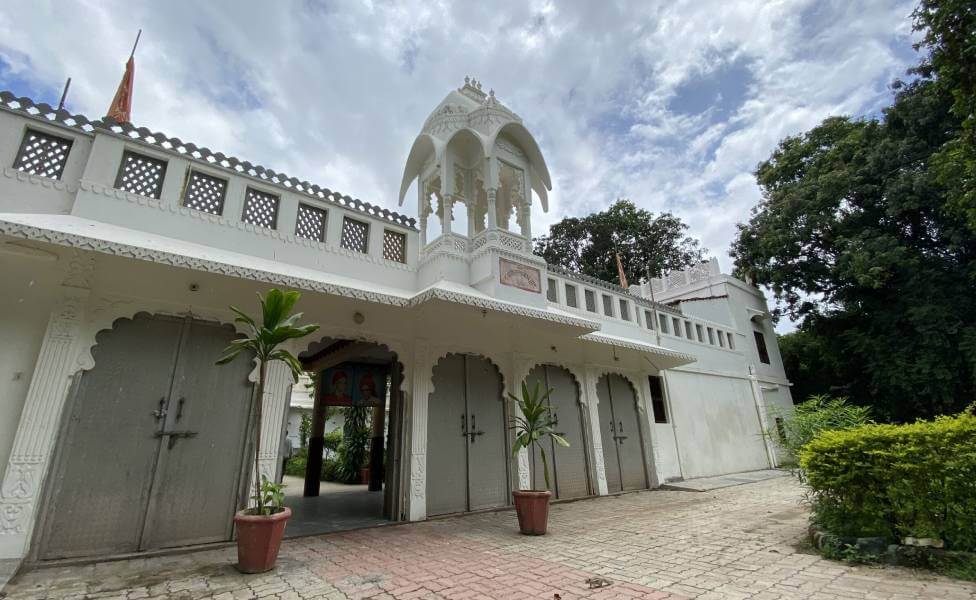 Navalakha Mahal is one of the palaces representing many historical tales, and if you don’t know them yet– let us give some information about the history of this location. The palace was built as a guest house by Maharana Sajjan Singh and was given to Arya Samaj for further development in 1992. Since then, the focus was to make it culturally attractive and it’s the efforts and time taken that this palace has become one of the top historical places in India representing the country’s traditions. If you are a Vedic literature enthusiast, there is a shop on the right of the entrance to entertain you with the most spectacular Vedic books. 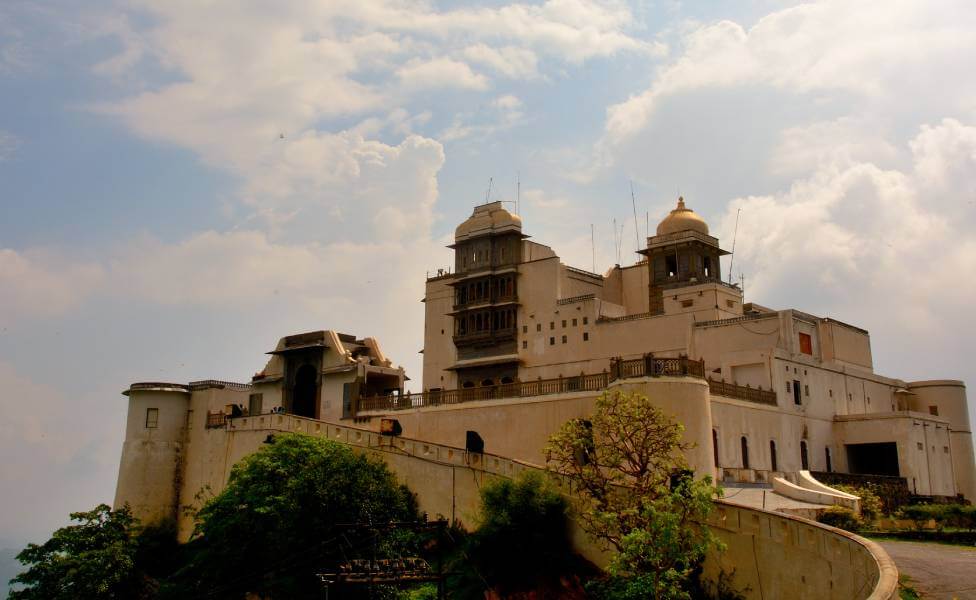 Well, we all know that every historical monument and site has something to tell and there are many secrets behind it. One of them is “The Sajjangarh Palace”, often called Monsoon Palace. The Fort, which is made of magnificent white marble, was constructed on the Bandara Peak of the Aravalli range, which rises 3100 feet above sea level and again has survived the ravages of time. This magnificent and enormous palace which was the opulent home of Maharana Sajjan Singh was constructed in 1884. You will be amazed to witness many sights from here.

The palace was built primarily for watching the monsoon clouds, that’s the reason why we call it Monsoon Palace.

If you have already visited these seven historical places in Udaipur, do share your experience in the comment box below. But, if you haven’t visited any of these places yet, let us tell you that this is the right time you plan for a trip to Udaipur. Do let us know if you seek any help in planning a trip. You can contact us via our social media pages, or the phone number given below or drop a mail at info@tourmyindia.com with your queries.

What are the top historical places to visit on the Udaipur sightseeing tour?

How many minimum days are needed to explore the best Udaipur heritage tour?

We would like to advise spending at least 3 days exploring all the highlights of the city.

Who built the City Palace of Udaipur?

Which are the popular UNESCO world heritage sites in Udaipur?

There are a total of nine sites listed in Rajasthan in the UNESCO world heritage. And out of them 2 sites are from Udaipur which includes Chittorgarh Fort and Champaner- Pavagadh Archaeological Park.