My Travelling Experience of Dwarka and Somnath in Saurashtra Gujarat 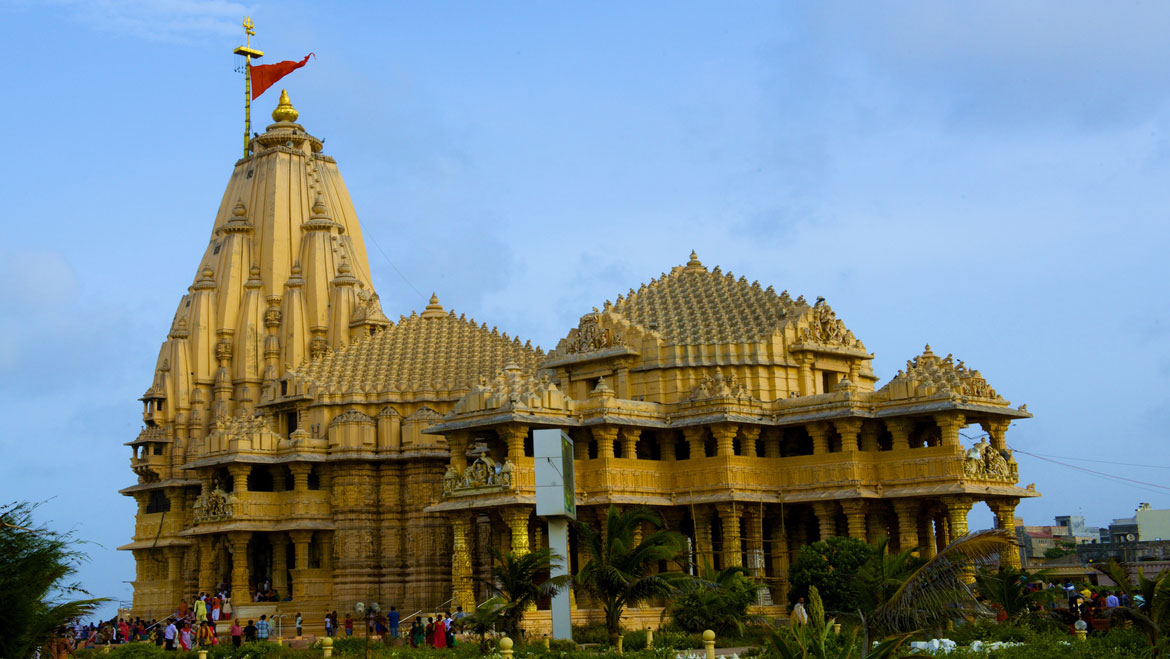 I am Nihar Mishra from Odisha, a senior citizen and today I am sharing my travelling experience of Saurashtra area in Gujarat, which I recently visited with my wife. I also express my thankfulness to Tour My India for letting me share my experience.

My wife and I decided to have a darshan of Dwarkadhish and Somnath as we had heard a lot about these sacred destinations. So we made a detailed plan and booked a Saurashtra package of 4 days 3 nights under Gujarat tourism with a package cost of 8.8k per person (there is a 20% discount for senior citizens). The tour started from hotel Taran in front of Sabarmati Ashram of Ahmedabad on 8th June and the weather was too hot with temperature touching the mark of 43 degree celcius. We were total 10 travellers assisted by one guide, a driver and a cleaner.

Day 1: A Visit to Rajkot and Dwarka 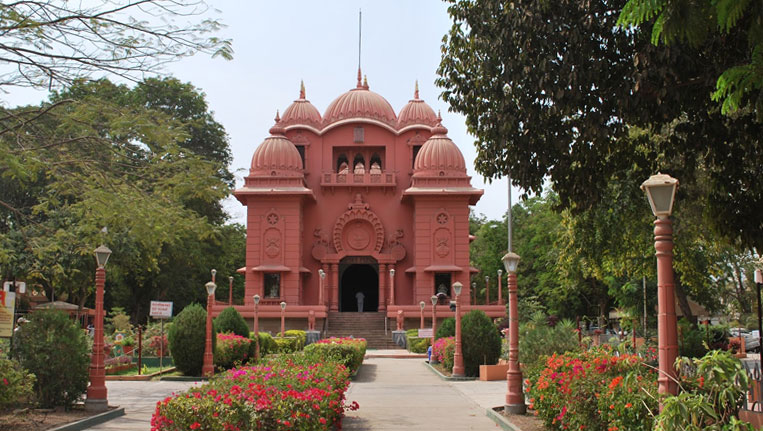 As per day-one programme, we had to reach Dwarka which is at a distance of 450 km via Rajkot and few tourist spots. Before reaching Rajkot we had our breakfast in a very elegant roadside Dhaba and the food (dosa) it served was delicious. Our next stop was Rajkot Ramakrishna Ashram. The guide explained that Swamiji spent a lot of time here and the local king sponsored swamiji for his famous America journey. The atmosphere was peaceful and tranquil. We also visited Bala Hanuman Mandir where for last 54 years Ramdhun Kirtan is going on uninterrupted. 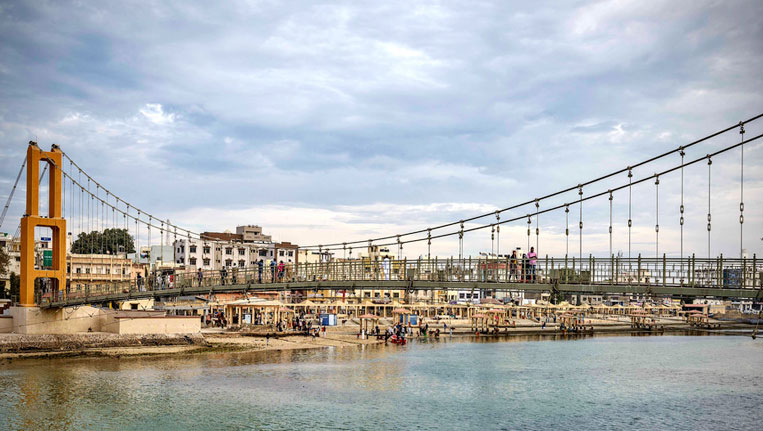 We reached Dwarka at around 4:30 pm and all of us landed at hotel Taran of Gujarat tourism corporation. The hotel offered us a very nice double AC rooms and overall staff and management was also satisfactory. After relaxing in the room for a while, we went to Sudama Rope Setu over river Gomati and saw the sacred 5 wells built by Pandavas including famous meditation spot of five rishis. We attended the evening aarti of Dwarkadhish which was soothing and enchanting. Our guide told that Dwarka was gifted to Balram by his father-in-law and Sreekrishna decided to establish his kingdom here and rule. We had our dinner in the hotel- puri, rice, sabzi, salad, dal for Rs 100 only (at govt rates). 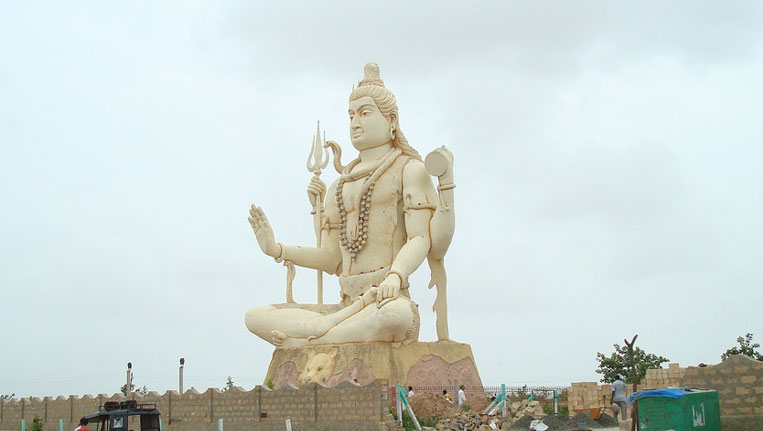 Next morning we proceeded on local tour and went to Nageshwar Shiva Temple, which is one of the twelve jyotirlingas. The speciality here is a very big size murty (Deity) of Lord Shiva in the open sky. From there, we went to Bet Dwarka via a ferry as it is situated in an island in the sea. Bet Dwarka was the living place of Sri Krishna with his queens Jambavati, Rukmani and Satyabhama. Here Sri Krishna embraced his friend Sudama and tasted 2 handful rice sent by Sudama’s wife and removed the poverty hardships of his dearest boyhood friend. Really, it was a memorable experience of the place and that of a sea journey. 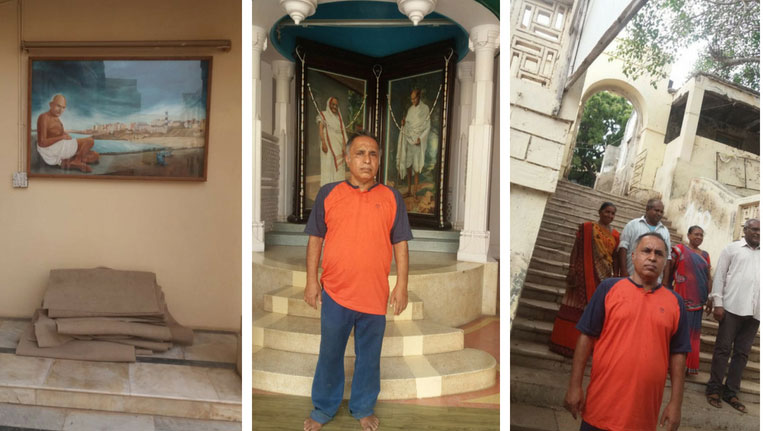 We had our lunch in the hotel and then post it, we started for Porbandar, en route, we visited Kirti Mandir. This building was constructed adjacent to Mahatma Gandhi’s birthplace. We could visit the living rooms of Mahatma Gandhi’s house and there are good portraits of Bapu and his wife Kasturba Gandhi. There is also a library and several pictures from different stages Mahatma’s life which reminds us about freedom struggle. It was evening and we returned to our hotel, which was located just by the seaside, I tell u friends what a beautiful scene it was. The setting sun, cool breeze blowing and sea tides were amazing – it took away all our tiredness. We all started chit-chatting and enjoyed the evening in our hotel with beautiful view.

Day 3: A Visit to Somnath Temple and Junagarh 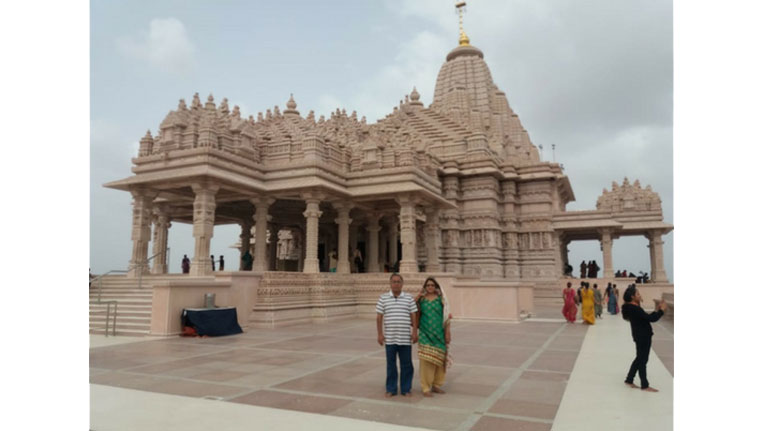 On the third day, we left the hotel sharp 7 am after taking breakfast (puri sabji upma) for a darshan of Somnath. On the way, we took a holy dip in Triveni ghat (confluence point of 3 rivers Hiran, Saraswati, Kapil) which merges with Arabian Sea. All sins are washed away with a dip at this confluence as is it said. 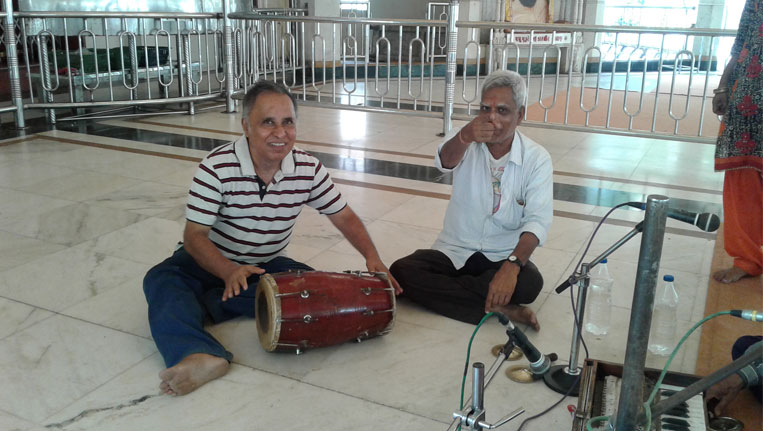 We also went to Bhalka (arrow) Tirth where Lord Vishnu is believed to have left his human form after being hit by an arrow. Also he was cremated by the Pandavas near the ghat. There is Laxminarayan Temple, which depicts all the 24 avataras (incarnation) of the lord. We were enjoying our visit to this grand temple when our guide cautioned us to proceed to Somnath to avoid delay.

A Brief Introduction of Somnath Temple by Our Guide

Mythologically, Som (moon) nath temple was built as a golden temple as Lord Shiva saved him from a curse of Dakhyaprajapati. Somnath is first jyotirlinga and is mentiond in Rigveda.

Historically this this temple was destroyed 17 times by invaders like Gazni, Allaudin Khillji and Aurangzeb. The present temple was built by Sardar Ballabhai Patel in 1950 and was inaugurated by the then President, Sankardayal Sharma.

There is three-tier security starting 2 km away from the temple. We attended the noon aarti, the place is magnificent with sea shore and divine atmosphere. Photography and mobiles are restricted inside the temple.

A Visit to Junagarh 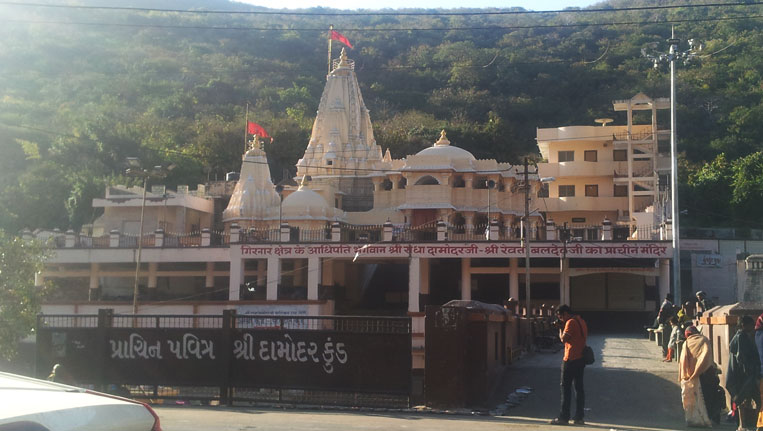 After the darshan, we had our lunch and thereafter proceeded to Junagarh, which is said to be the last place in this part of the state to become an Indian territory. The place is surrounded by mountains and hills that is known as Girnar. We visited the Damodar Temple here along with caves of Muchkunda who destroyed Kalyaban. Then there is Mahabat Maqbara, which is said to be the mini Taj Mahal built by Mahabat Khan II.

Feeling extremely tired, we went to our hotel for a night halt. 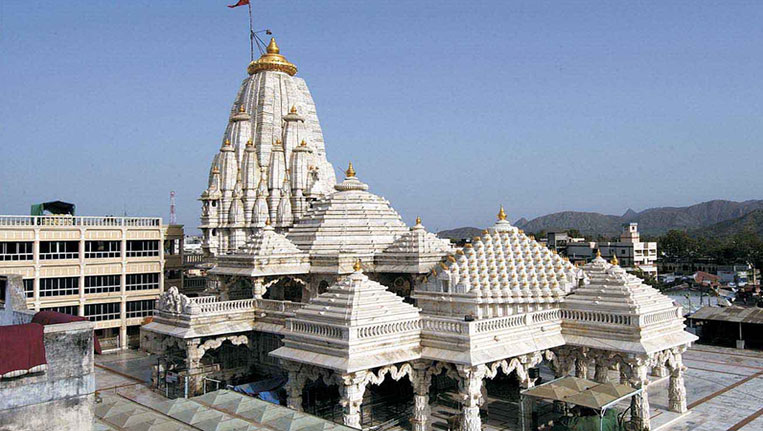 On the final day after breakfast in Taran Hotel (upma puri bhaji at Rs 60), we moved to a newly constructed Maa Amba Mandir built by Patel community. It is spread over a very large area with spectacular architecture, spacious gardens that has numerous beautiful flowers and Mother Goddess idol. Water and tea was free here. We spent couple of hours here. 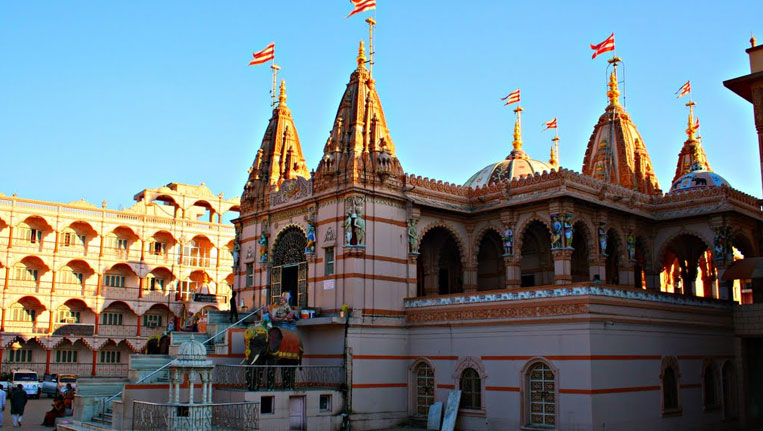 Our next destination was Swaminarayan Temple. It took 1 hour to reach there. Really, it was an eye-catching sight. It is said Lord Swaminarayana himself urged to build this temple. We all went round the samadhi pitha of Swaminarayanaji. There is a good food court in the temple premises and the food served tastes good. The temple has a large premises and we all spent 1 hr here after taking Lunch. 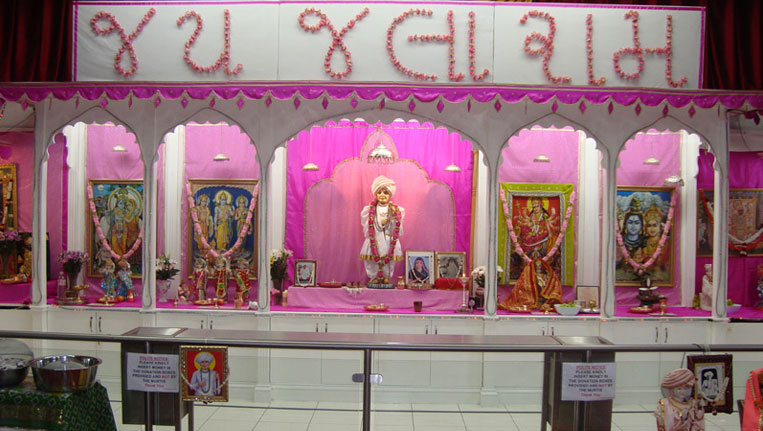 Next we proceeded to Jalaram Temple, which is dedicated to Jalarambapa, a revered saint. People from around the world visit this temple which is situated in a small village of Gujarat, Virpur. It is 52 km from Rajkot and one peculiar thing about this temple is that donations are forbidden here. There is free food serves to all. We also viewed the jhola and danda of Jalarambapa. There was also the original Hanuman idol given by God to Jalarambapa’s wife Virbai. 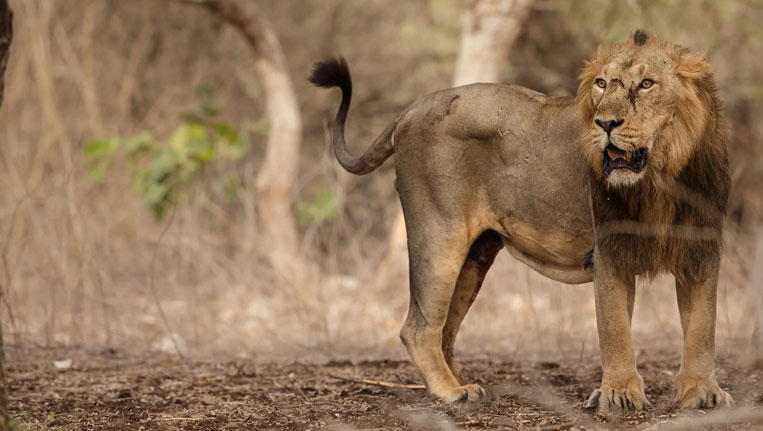 Our last destination was Sasan Gir National Park. We booked tickets to take a wildlife safari in the reserve. Gir forest is only forest in the world except Africa where lions move freely in a big area. During our 45 minutes tour, we could see lions in groups resting as well as walking. Also deer and leopards were spotted during our safari tour.

Now friends, it was 4:45 pm and our tour came to an end. We reached Ahmedabad at 7 pm and bade goodbye and departed with sharing our mobile numbers. Our flight to Bhubaneswar was at 6 am.