Rajasthan State Government has yesterday announced that there will be no more full-and half-day safari tours in Ranthambore Tiger Reserve from now onwards. However, the latest Ranthambore Tourism Update also states that the regular three-hour safari will be continued as usual in two shifts.

The state government has issued the notice stating why they want to halt these expensive safari tours. They told the media that the decision to stop these tours will reduce stress on the big cats and other wildlife from vehicle movement, noise of tourists and other factors. The decision may become a monetary loss for the government but concerning the health and decorum of the forests and wildlife in Ranthambore National Park, it stands correct. Moreover, wildlife enthusiasts across the country have been welcoming these steps taken by the Rajasthan Government.

As per reports, there are 565 pending bookings for full-and half-day safaris, which will be adjusted in future according to the announcement. But, no new bookings for such safaris will be taken furthermore. So, if you are planning a wildlife vacation trip and want to experience a safari tour, we recommend you to check the news beforehand.

Ranthambore’s T-104 or Aves To Be Caged For Life

Another latest Ranthambore National Park News Update has come stating that Aves, code numbered T-104, who has been blamed for three human deaths, is to be caged for life.

The maneater of Ranthambore, born in 2016 to Laila, T-41 and Akash, T-64, Aves was kept in an enclosure in the Bheed forest region since 2019 after he went on a killing spree: three humans in a row within two months in Karauli district. It continues showing aggressive behaviour towards other male tigers who come close to its enclosure.

The Forest Authority of Rajasthan is therefore making up their mind to shift the tiger to a cage in Darrah Range of Mukundra Hills Tiger Reserve, which tourists cannot visit. Reportedly, the chief wildlife warden has already written to NTCA (National Tiger Conservation Authority) about the shifting.

Apparently, there are no reasons found how T-104 became a maneater, who is young and healthy. It seems, RTR has become congested by about 86 big cats, who don’t live with other tigers and create their own territory. This could be a reason why tigers are being pushed out of their territory and attacking humans. 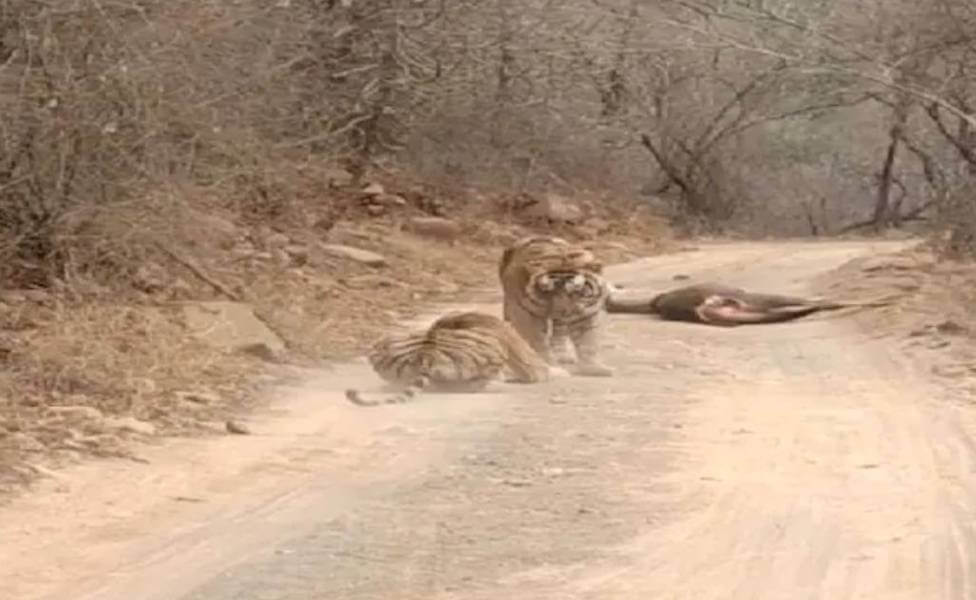 A viral video is doing rounds on the internet showing two tigers fighting over hunting a sambar deer in Ranthambore National Park. A goosebump moment for all the wildlife enthusiasts present at that time, the tigers fighting video shows how one tiger fought against another and started eating the carcass after winning the fight. The tiger fight captured on camera by the tourists in Ranthambore National Park on June 15 has left them thrilled for the moment.

It seems that Ranthambore has become a hotspot for viral videos. There are many viral videos showing a tiger chasing a tourist jeep or hunting a dog, deer and many more. But, this is for the first time, two tigers are seen fighting with each other. As per the authority, the increasing number of tigers has been the main reason behind this incident.

The fight was captured in Zone 2 of the park. Two tigers, numbered T-120 and T- 84 arrowhead were seen fighting with each other in the Ranthambore National Park viral video. The latter lost the battle and left the place. And, then T-120 started eating the sambar comfortably.