Indian Women Travellers who will Give You Serious Wanderlust

Indian Women Travellers who will Give You Serious Wanderlust

Women will always be women – powerful, inspiring, and quirky and India women, well they will always be full of surprises. In a country where women are considered a weaker gender, making bold choices can be difficult, but not for these Indian women travellers, that not only chose to life their lives on their terms but to push their limits to achieve impossible tasks tagged impossible for both the genders. Our blog honours some of the popular Indian female travellers and bloggers who have become a source of inspiration for many. Stay with us on this one and we assure a great read that will make your day.

Shivya Nath: A Star that Guided the Way of Many Other Aspiring Travellers 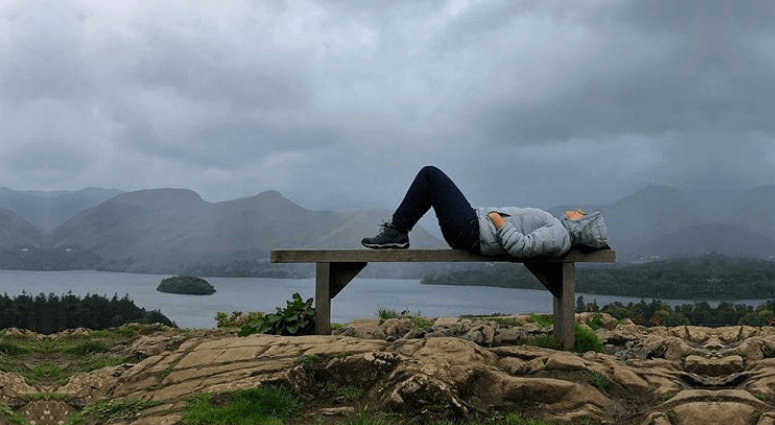 Thereâs hardly any traveller in India who doesnât recognize Shivya Nath. This popular woman traveller has been a prominent entity in the travel scene and her travel stories have inspired many. At the age of 23, Shivya left her corporate job and what followed is known to everyone. She also promotes responsible tourism through India untravelled which connects travellers with environmentally and socially sustainable travel initiatives. Shivya has also been awarded Indiaâs best travel blogger.

Mridula Dwivedi: A Woman Traveller whose Smile is as Beautiful as Her Travel Pictures 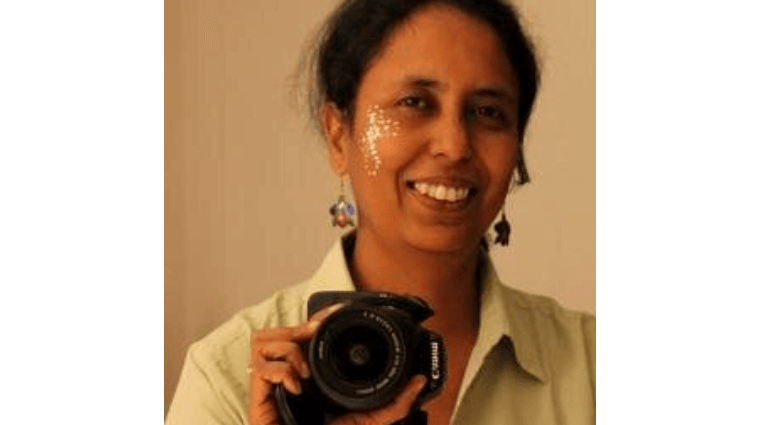 Another inspiring life to up to is that of Mridula Dwivedi. Like Shivya, Mridula also quit her job to travel around the world. In 2005, she started her own travel blog and soon enough she was featured in BBC and the Guardian. Her travel tales come from 27 countries and her photographs are truly going to inspire you to travel.

Lakshmi Sharath: A Storyteller that will Win Your Heart with Amazing Travel Tales 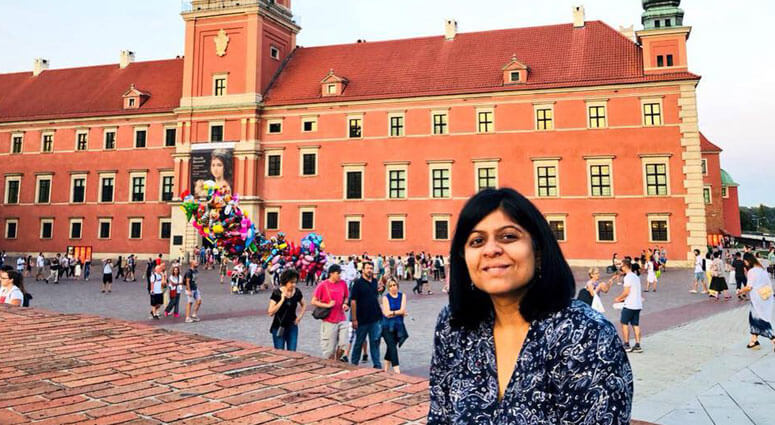 Lakshmi Sharath asserts herself as a storyteller, a traveller, travel blogger, writer, digital influencer, content specialist, media professional Â and photographer. This famous travel blogger began her blog in 2005 and ever since she has offered exciting travel write ups from her extensive voyages to 25 countries and the hidden parts of India. Her blog has won several accolades including winning the Indibloggies -Indiaâs best travel blog of the year and has been rated on several lists among the Top Travel Bloggers in India and digital media influencers in the country.

Anuradha Goyal: A True Inspiration to Women who Want to Travel the World 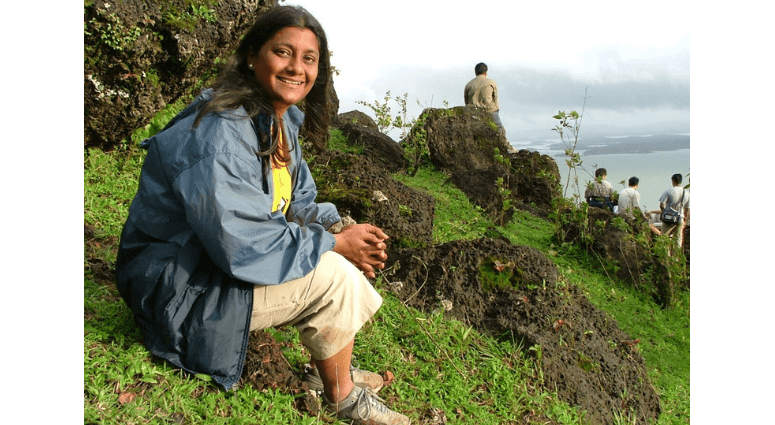 Beginning her blog in 2004, Anuradha Goyal set on the path of being an inspiration to many other women wanting to travel. Her articulate and authentic write-ups have helped many including me plan my trips in India and to know about a new destination inside out. Anuradha has also spoken at Tourism conferences, Travel and Tourism Events, Student community events and mentored a few startups in travel space ever since the beginning of her journey.

Rutavi Mehta: The Right Person to Confirm that Crazy is Fun 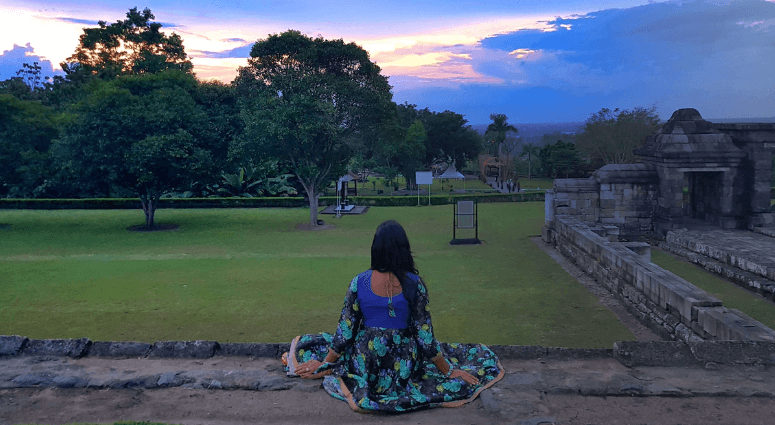 Rutavi is known for some crazy adventure like riding an auto rickshaw from Jaisalmer to Shillong for 3000 km and staying in Lakshadweep for over a month. This girl knows how to live the life to the fullest. Rutavi has backpacked her way to Europe and is also committed to teaching kids in Ladakh. She has bagged climbing Mt.Everest Base Camp as one of the 9 winners of Kingfisher Blue Mile which is also TV Show on the national channel NDTV Good Times.

Jai Bharathi: The Badass Biker who Can Teach You How to Push Your Limit 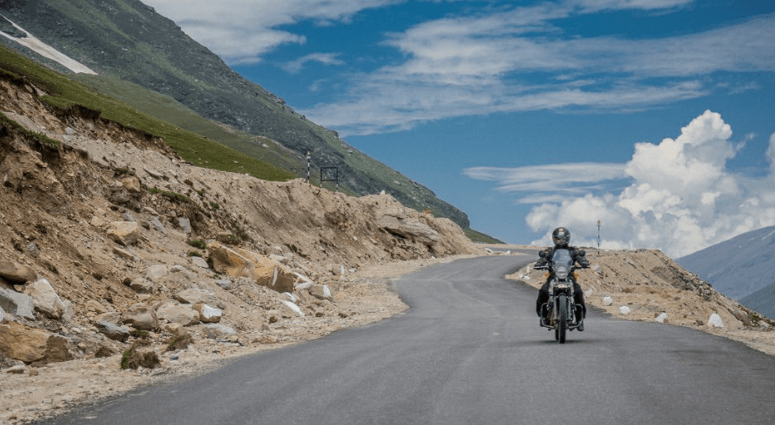 This woman biker is fire! Known for covering all the UNESCO World Heritage Sites in India and Nepal in one calendar year, Jai Bharathi is the right kind of inspiration we need. Bharathi has also run marathons, the one quite special was Istanbul Marathon, in which she also including visiting 11 UNESCO sites in 11 days in Turkey. She is the co-founder of Bikerni, an all-women motorcycle club in India through which Bharathi has completed exciting bike riding trips from Kanyakumari to Kashmir covering 8600 km in 27 days.

Amrita Das: The Apt Person to Urge You to Go Solo 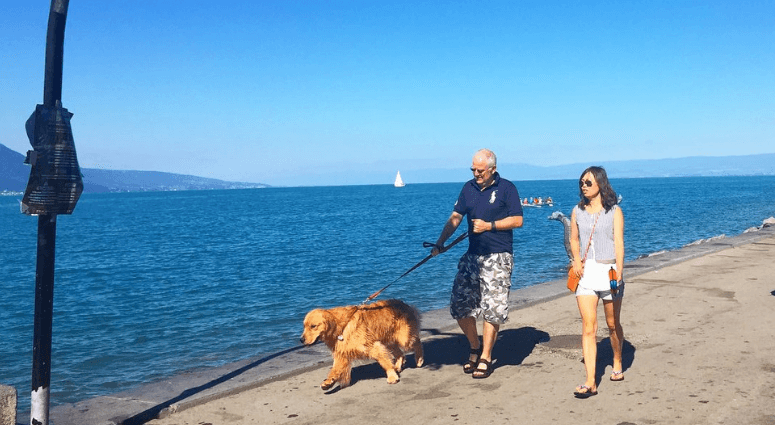 Propagating solo female travel, Amrita Das is another prominent solo Indian women traveller who have been encouraging people to step outside and explore the beautiful world we live in. Das runs a popular blog site – Travelling Ides of March and in 2015 was Â listed as one of the 35 Best Female Blogs to Follow by Travel Junkette. She too like several other Indian female travellers quit her job (in 2014) to travel full time and make a living out of it by brand collaborations, social media marketing as well as content marketing.

Archana Singh: A Young Female Traveller Reminding You Life is too Short to Have Regrets 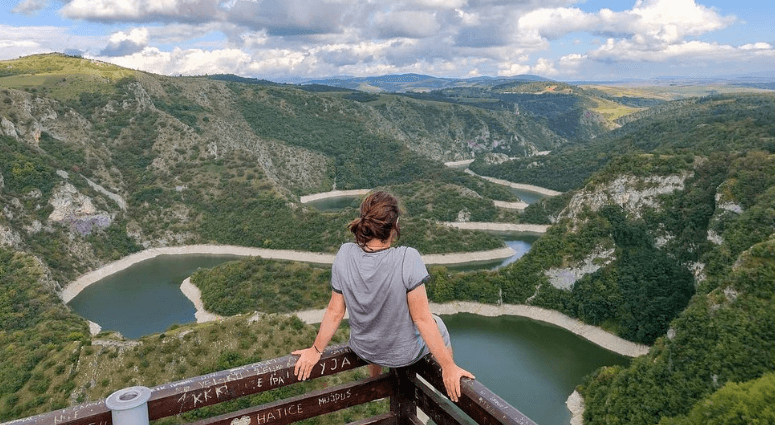 A woman of substance Archana Singh is all about maintaining that perfect media image and enjoying travel to the fullest. This young female travellers has achieved numerous feat keeping travel in the centre. From receiving top blogger honours to public speaking not only in India but internationally as well, Archana has made her mark as a prominent Indian female traveller to certainly look up to for inspiration.

Charukesi Ramadurai: A Freelance Journalist that will Rekindle the Wanderlust in You 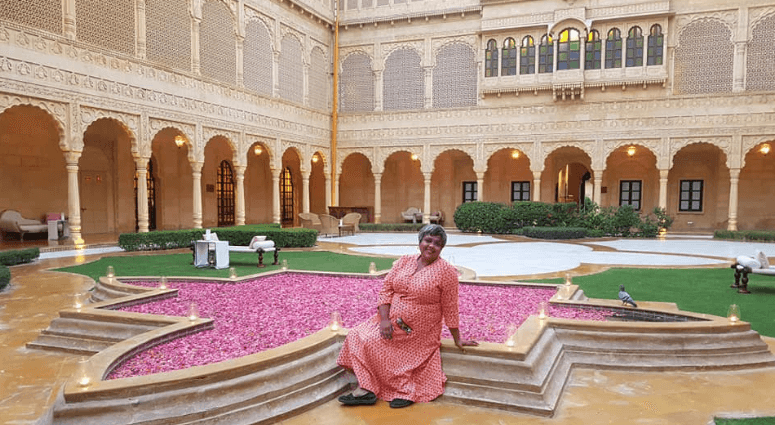 Charukesiâs travel experiences and writings can be addictive. A freelance journalist, she is known for her vivid write-ups on travel, food, books, arts and culture, gender and development issues and the joys of social media and networking in Â The New York Times, South China Morning Post, The Guardian, City Lab, Roads & Kingdoms, NPR, Atlas Obscura, The National, Silverkris (Singapore Airlines), Independent, The Wall Street Journal and Khaleej Times among others. She also writes for Indian publications like Mint, Outlook Traveller, Conde Nast Traveller, Economic Times, Forbes, New Indian Express, Business Line, The Hindu, Deccan Herald, Indian Express and Jet Wings. Her work is impressive and can certainly give you a serious wanderlust.

Ankita Sinha: An Award-Winner Traveller to Give You Some Serious Life Goals 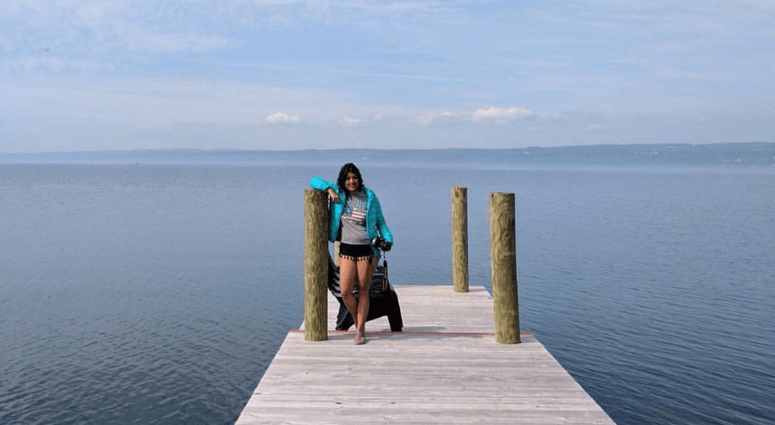 An award-winning travel and adventure blogger, who like many on this list gave up her corporate job to travel the world. In an interview quoted âLife is more than a job and a salary,â and thus, she followed her passion and became one of the most popular Indian travellers. Ankita is known for her interesting travel videos in which tries to cover the essence of a destination she is at. Youâd simply become addictive to her videos as they rekindle a fire to see the world with your own two eyes.

Neelima Vallangi: An Inspiration for Spending that Perfect Time with Yourself 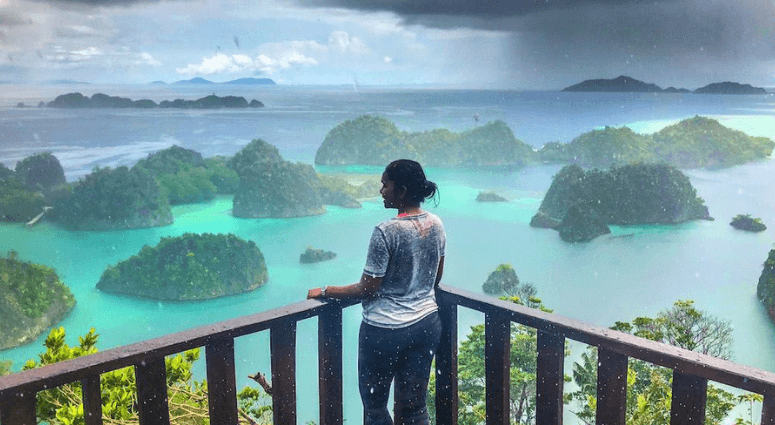 Neelima Vallangi indeed has a story to inspire that determination yields success. An award winning photographer and travel writer, this Indian girl won a National Award for photography in the very first year of her travel. Neelimaâs adventures include stalking a snow leopard in Ladakh; snorkeling in one of the world’s most pristine coral reefs; hiking solo for a month in Turkey; exploring the steppes of Mongolia by a truck for weeks and spending time in the Himalayas. She enjoys taking the roads less travelled and in that venture she has covered the offbeat corners of Â Mongolia, Turkey, Indonesia, Nepal and several other countries. If she doesnât inspire you to travel, then I donât know who else will.

Elita Almeida: A Storyteller that will Help You See the Goodness in the World 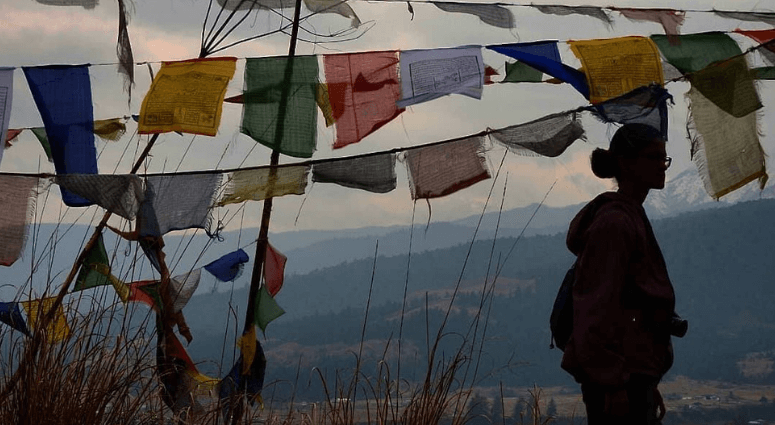 Inspiring women to travel solo, Elita Almeida is yet another female traveller you must know about. Almeida is known for covering all 29 states in India at the age of 29, and she has plenty of stories to share with you. A solo traveller, Elita considers it a way to reconnect to herself, and we couldnât agree more. Both her photography and travel experiences certainly can excite you to start packing and head out that door. Follow her journeys here:

Medhavi Davda: The Right Person to Inspire You to Achieve the Impossible 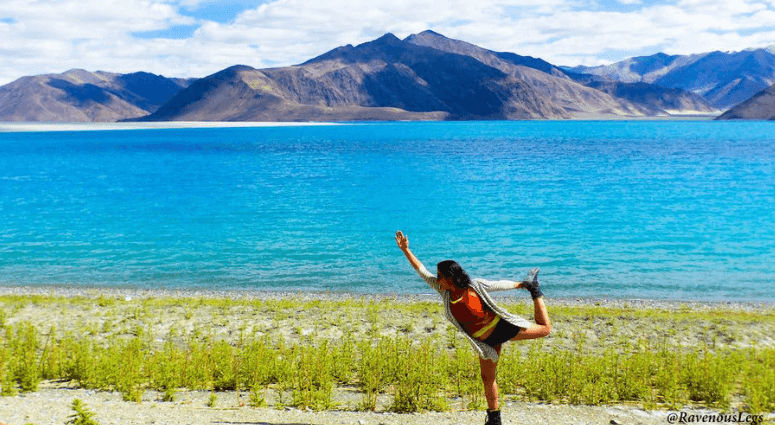 Medhaviâs passion for travel is contagious, once youâd see her pictures and read her write-ups there is no way you would want to sit at home. A solo woman traveller and adventure travel blogger, Medhavi is a high-altitude trekker and a certified scuba diver. Leaving her 9+ years career in IT, this one of the most popular Indian woman travellers went to stay in Himachal Pradesh and then from there to other parts of the country and abroad. Medhavi confesses her love for the Himalayas and calls it her home. She has been on the list of several blogs as one of the best solo women travellers and has also spoken on TEDx. Her travel can give you some serious travel goals and inspire you to push your limit to pursue your dream. 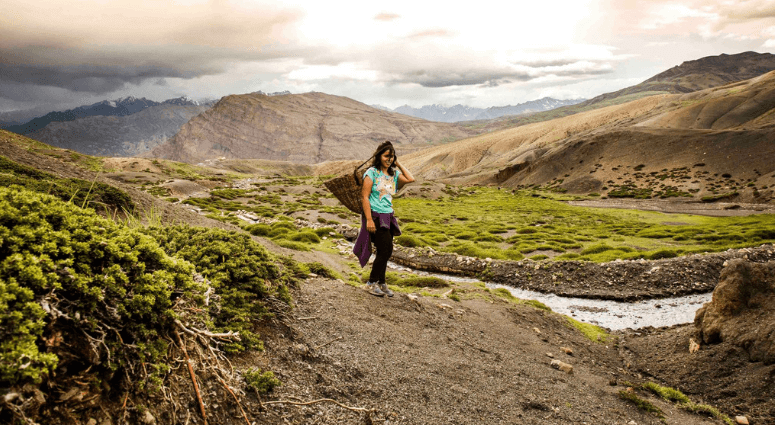 Canon India photo mentor, social media influencer, and amongst the top travel bloggers in the country, Deepti Asthana is one of the most inspirational woman travellers in India. Deepti is known for bringing stories and powerful photos from the places lesser-trodden. Her initiative to share stories of women of India through her venture named the same, is worth appreciating. Her work has been published in BBC News, Al Jazeera, The Hindu, Outlook Traveller, Asian Age, Der Spiegel, Huffington Post, Daily Post to name a few and she has also won International Youth Photography competition, awarded by UNESCO for a picture she had taken in one of the Pagodas, in Cambodia. Deepti is indeed one of those Indian female travellers to be followed on social media. 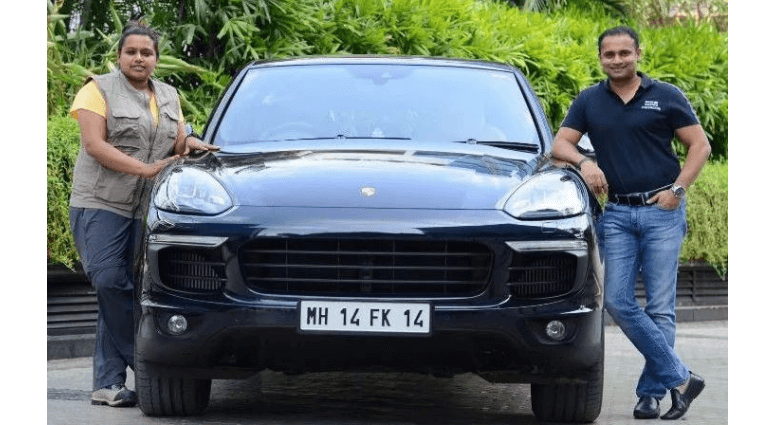 This list is incomplete without mentioning the Queen of Roads, Nidhi Tewari. This adventure traveller is best known for driving all the way from Delhi to London along with her two friends. It was an epic journey as we know it, and Nidhi found her way to popularity ever since. Â Next solo adventure awaited her in the form of a venture of 5000 km to Siberia alone. She is truly a woman of substance, someone we can always look up to for that boost to break the norms and follow our hearts.

Well, these are some of the names amongst the many that India boasts. There are powerful women breaking norms and creating records everyday in the country and salute all their efforts and their tireless journeys. From the story of each one of these women travellers mentioned in the blog, a common message imparted is that when there is a will there is a way. So dream, strive for them, and make them come true for the universe is with you.

Female Travellers that Hold Records in the World

Women travellers have been on constant quest for places that can satiate th...