If you are planning for a holiday in Mumbai then make sure you are there at the time of the Ganesh Chaturthi Festival. Celebrated extravagantly in the states of Maharashtra, Gujarat, Karnataka, Kerala, and Tamil Nadu and slowly expanding to other parts of India. This festival is also known as Vinayak Chaturthi. Ganesh Chaturthi Festival has also spread to countries like the United States, Canada and many Southeast Asian countries. One of the major festivals in India that is celebrated by the Hindus, the Ganesh Chaturthi Festival is usually celebrated in the month of Bhadrapada according to the Hindu calendar. The joyful occasion starts on the propitious fourth day of the waxing moon period, traditionally known as “Shukla Chaturthi”.

It is 10 days of extravaganza and rendezvous that ends on the fourteenth day of the waxing moon period or “Anant Chaturdasi ”. It is one of the most popular festivals celebrated in Mumbai with a great pomp and show. Devotees from all over the world come here to see the grandeur of the Ganesh Chaturthi Festival and take part in the celebration. 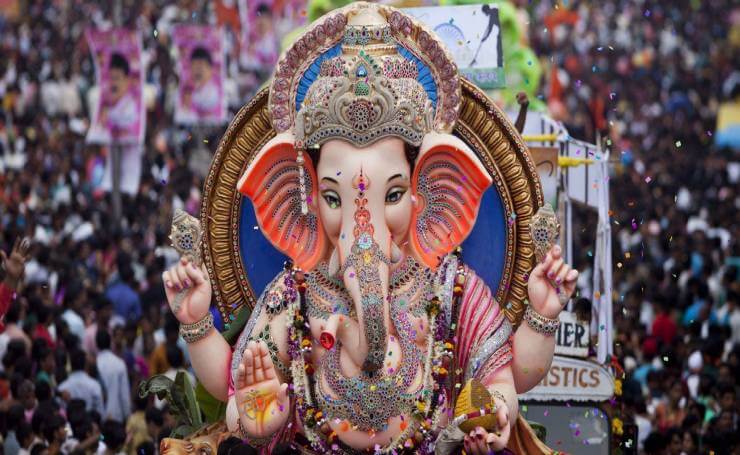 The event was largely popularized by the Peshwas in the 18th century BUT it lost its patronage slowly after 1818. Later in the late 19th century, Lokmanya Tilak encouraged the annual domestic festival and saw to it that it grew into a large and well-organized national festival motivating both the Brahmins and non-Brahmins. 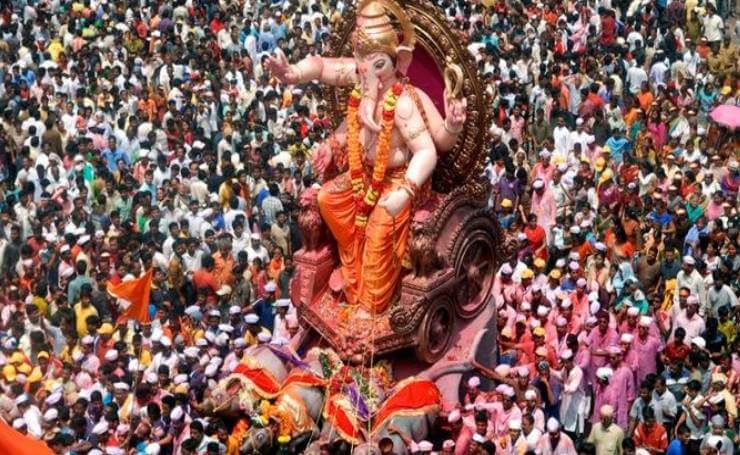 According to tradition, one should not look at the moon during some specific times on Ganesh Chaturthi as it is believed if a person looks at the moon, he’ll be cursed and will be accused of theft. The belief originated from the incident from Lord Krishna, who was falsely accused of stealing a valuable jewel.

It was Sage Narada who suggested that Lord Krishna must’ve seen the moon on Bhadrapada Shukla Chaturthi (the occasion that Ganesh Chaturthi falls on) and was cursed because of it. Therefore, it is believed, anyone who saw the moon during a specific time in Ganesh Chaturthi would be cursed in a similar way.

Why and how was the Ganesh Chaturthi Festival celebrated? 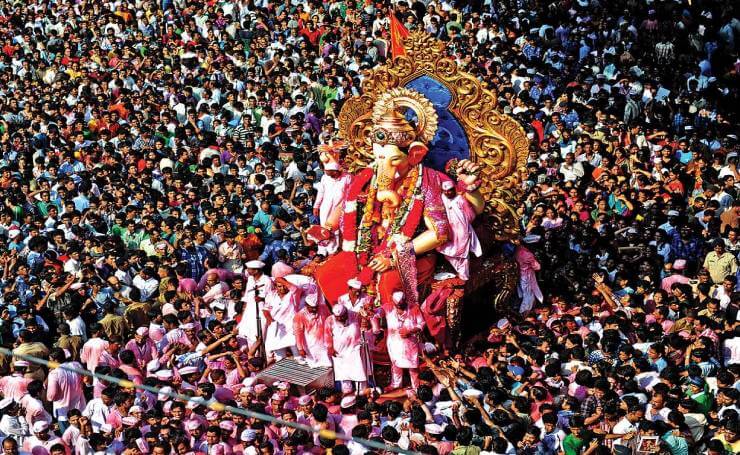 According to tradition, one should not look at the moon during some specific times on Ganesh Chaturthi as it is believed if a person looks at the moon, he’ll be cursed and will be accused of theft. The belief originated from the incident from Lord Krishna, who was falsely accused of stealing a valuable jewel. It was Sage Narada who suggested that Lord Krishna must’ve seen the moon on Bhadrapada Shukla Chaturthi (the occasion that Ganesh Chaturthi falls on) and was cursed because of it. Therefore, it is believed, anyone who saw the moon during a specific time in Ganesh Chaturthi would be cursed in a similar way.

Lord Ganesha is a non-sectarian Hindu deity and hence at the time of the Ganesh Chaturthi Festival you will notice that there is a rendezvous of people belonging from different social status. The grand celebration starts with the installation of Ganesh idols in colorfully decorated pandals (erected temporary structures) … followed by ‘pran pratishtha’ where the chanting of mantras invokes the presence of Ganesha.

Thereafter, ‘shodashopachara (16 ways of paying tribute)’ is followed. At the time of the ritual coconut, jaggery, modaks, durva (trefoil) blades of grass and red flowers are offered and throughout the ceremonial occasion several Vedic hymns echo down the mind of devotees bringing in a divine peace. Further… if you are in the states of Tamil Nadu, Kerala and Andhra Pradesh, you will notice several music and dance performances, especially the Bharatanatyam dance. On the last day, immersion of the statues in the ocean, or other bodies of water, and their subsequent destruction serves as a reminder of this belief. In Mumbai… the occasion is celebrated with great fervor bringing in celebrities, business tycoons and common man under a divine allegiance.

Significance of Anant Chaturdashi/ Immersion of the Idol 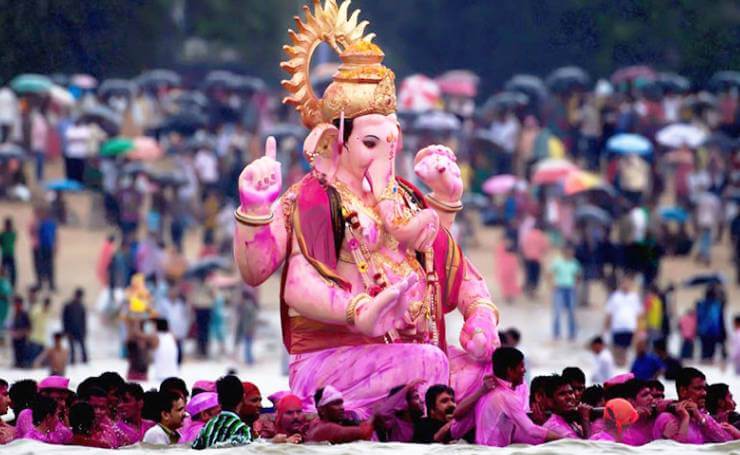 The immersion of the idol takes place on the day of Anant Chaturdashi. The word Anant means infinite or eternal energy or immortality, whereas Chaturdashi means 14th. Thus, the occasion falls on the 14th day of the Bhadrapada month of the Hindu calendar and on it Lord Ananta, which is the incarnation of Lord Vishnu is also worshipped.

Immersion of the idol has a belief attached to it; Hindus believe in the concept of constant change in the world which construes what it is there today in one form or the other will tomorrow be formless. The concept of immersion is thus a reminder of this belief. 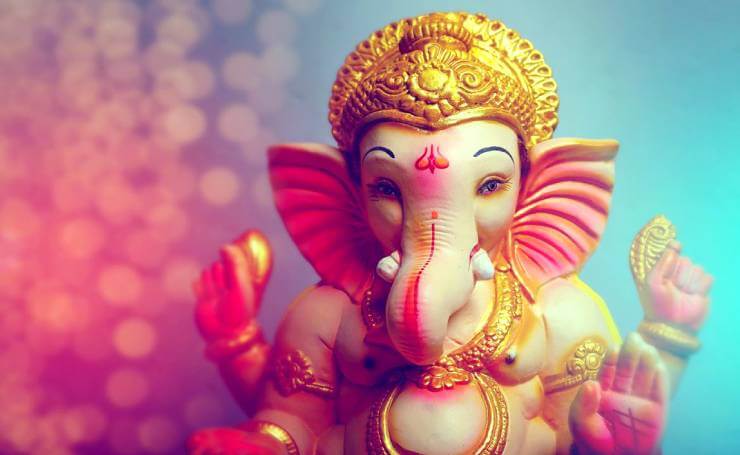 The best from the rest of all the Ganpati Pandals of Mumbai is the pandal of Lal Baughcha Raja. It is a must not miss Pandal to visit for a Ganpati Festival Celebration in Mumbai. Lakhs of devotees from all over the world came to Mumbai to witness this grand festival and seek divine blessings from Lord Ganesha. It was established in 1934. Lord Ganpati was established here as Navasacha Ganpati, the one who fulfills all the wishes. The sculpture of Lal Baughcha Raja has been made by Kambli family since many decades.

Ganesh Chaturthi Festival in 2021 would be more interesting and joyful if you visit this most popular Ganesh pandal in Maharashtra.  Here Lord Ganesha is known as Fortcha Icchapurti or wish fulfilling Ganesha. It is run by Ravi Sauve who is a great devotee of Lord Ganesha. This pandal is very popular for its grand decoration and artwork. One should not miss this pandal at any cost if they want to enjoy the festival of Vinayak Chaturthi.

There are many Ganesh Pandals in Mumbai but the grandeur of Girgaoncha Raja is something else. This year it will be the 93rd year of Ganesh Chaturthi Pooja celebration. It is the oldest Ganapati Pandals in Mumbai.  The celebration of Ganesh Chaturthi is always done in a eco- friendly manner. The grandeur and glory of this pandal is such that once our honorable PM Mr Narendra Modi mentioned this Pandal in ‘Man ki Baat’. So, what are you waiting for? Celebrate Ganesh Chaturthi festival in the oldest Ganpati Pandal of Mumbai.

It is a mind-boggling experience to see the Ganesh Idols of one of the richest groups in Mumbai. GSB Seva Mandal is very popular for its expensive and beautiful Ganesha Idols. This year it is the 67th Ganapati Festival celebration for the mandal. Every year the festival of Vinayak Chaturthi is celebrated with great pomp and splendor but this year keeping in mind the covid guidelines poojas are booked online and the festival will be celebrated for 5 days – 10th September to 14th September.

Must Visit Temples in India During Ganesh Chaturthi Festival 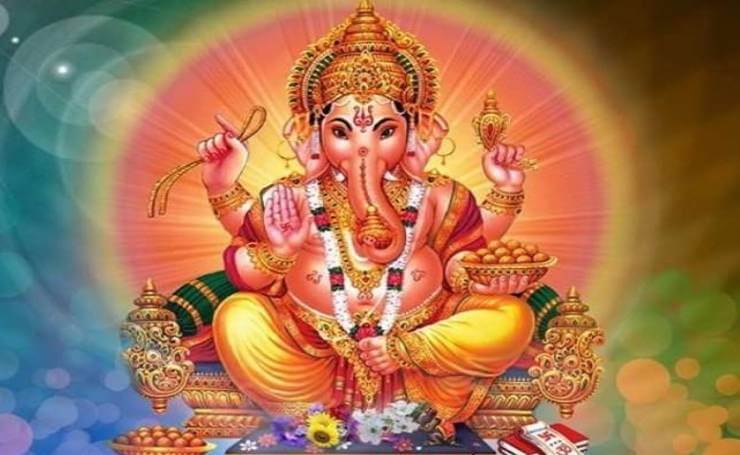 The Moreshwar Temple in Morgaon, Siddhivinayek Temple in Ahmednagar, Ballaleshwar Temple in Pali, Varad Vinayak Temple in Mahad, Chintamani Temple in Theur, Girijatmaj Temple in Lenyadri, Vighnahar Temple in Ozar and Mahaganapati Temple in Ranjangaon are the notable eight temples in Pune dedicated to Lord Ganesha where you can experience the Ganesh Chaturthi Festival.

It is one of the popular temples in India that is located in Prabhadevi in Mumbai. The temple holds a small hall with the shrine of Siddhivinayak, a gold-plated sanctum, carved images of Ashtavinayak, a statue of Lord Ganesha and a Hanuman temple as well. The temple witnesses a large gathering of Bollywood celebrities, politicians and business tycoons at the time of the Ganesh Chaturthi Festival and thus you can expect tight security.

Built in the 11th century by the Cholas, it is one of the ancient temples in India that is dedicated to Lord Ganesha. Located in Chittoor, which is approximately 580 kilometers from Hyderabad, the Kanipakam Vinayaka Temple is also popular for the gala affair on the Ganesh Chaturthi Festival.

Another ancient temple in India that was built in the 4th century… the Karpaka Vinayakar Temple, which is also known as Pillaiyarpatti Pillaiyar temple in Tirupattur, is a rock cut cave shrine dedicated to Lord Ganesha. The Ganesh Chaturthi Festival is celebrated in a grand manner and one can also witness several cultural programs.

It is one of the ancient temples dedicated to Lord Ganesha and is the biggest Ganesha temple in Ujjain… hence the celebration of Ganesh Chaturthi Festival overflows with eager enjoyment.

Ganpati Bappa Morya! We hope that this blog will help you in planning your trip to Mumbai for Ganesh Chaturthi Puja celebrations. Follow all the covid protocols and enjoy the festivities in the best Ganpati Pandals, relish some lip-smacking delicacies and inculcate positive vibes and divine grace from Lord Ganesha. You can also book Ganpati festival Tour from TourMyIndia and get the best deals on it.

Q.What are the dates for Ganesh Chaturthi Festival 2021?

Q.What will be the timings for Ganesh Chaturhi Pooja?

Q.What are the guidelines or Tips to follow to enjoy the festival of Ganesh Chaturthi in Mumbai?

Q.What is the Ganesh Chaturthi Specific special delicacies to enjoy in Mumbai?