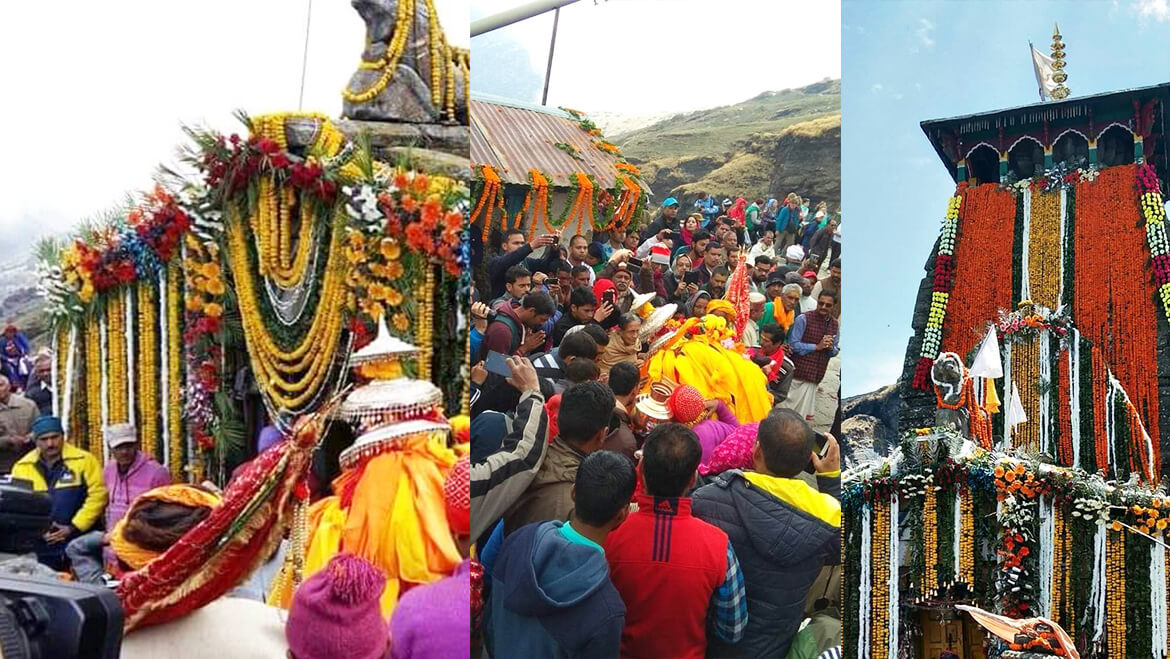 The portals of Tungnath Temple have finally been opened for the devotees, causing immense excitement to all those Lord Shiva Bhakts (devotees) who had been waiting for it impatiently. Every Shiv bhakt (devotee) has a reason to rejoice today, since the portals of Tungnath Dham have been opened. To the great excitement of everybody, the doors of Tungnath Temple, which is a part of Panch Kedar, were opened for everybody on 11:00 AM after the observance of traditional rituals and ceremonies.

The doli, or procession, along with the statue of Lord Shiva, has departed Chopta on 9th May and had left for Tungnath Dham on the 10th May. The portals of Tungnath Dham were opened for devotees on 11:00 AM. The Tungnath doli, or procession, left Chopta in the morning and arrived at Tungnath Dham at around 10:30 AM. After the proper observance of rituals and ceremonies according to traditions, the doors of the temples were finally opened. A large number of devotees arrived at the temple to witness its opening and seek blessings.

On Friday morning, priests and other religious figures prayed to the image of Lord Shiva who was brought in a procession, along with other 33 gods and goddesses inside the Bhootnath Temple. After the Tungnath Dham portals were opened, a long line of devotees were waiting in anticipation to seek blessings.

Why is Tungnath Temple So Famous?

Tungnath, located in the Rudraprayag district of Uttarakhand, is the highest temple dedicated to Lord Shiva as well the highest of the Panch Kedars. It proclaims its glory at an altitude of almost 3680m. The amazing height at which it is situated does well to enhance that ancient aura which surrounds it. The colossal snowcapped mountain ranges provide the perfect backdrop to the temple.

Another factor which plays a role in its being a famous tourist attraction in Uttarakhand is its being over 5000 years old, which makes it significant both historically and culturally. Although the presiding deity of the temple is Lord Shiva, you will also come across other deities inside the temple including Goddess Parvati and Nandi (the vehicle of Lord Shiva). From 10th May, which is the opening date of the temple, devotees will be seeking blessings of these deities and offering prayers.

Why is Char Dham Yatra Extremely Significant for Hindus

Tungnath Temple is part of the Panch Kedar (five temples dedicated to Lord Shiva) and is the first temple to be visited during the Panch Kedar Yatra (apart from Kedarnath). The four temples which form a part of this yatra are Tungnath, Rudranath, Madhyamaheshwar and Kalpeshwar. Each of these five pilgrimage destinations have a special religious and cultural significance, and all of them are covered as part of one yatra. It is also believed that this place is where the arms of Lord Shiva appeared. There is a popular legend behind this episode, which goes as follows.

How to Complete Char Dham Yatra in 10 Days

Legend behind the Panch Kedar

According to a popular tale in the famous Indian epic, Mahabharata, the Pandavas went to Sage Vyas to seek forgiveness. He told them that since they had killed their own relatives during the war, they had committed a sin of the highest kind. Only Lord Shiva could forgive them now. However, Lord Shiva continued to avoid them since he was acquainted with the magnitude of their crime and knew they sought forgiveness. He took the shape of a bull and went into hiding at at Guptkashi.

The Pandavas though, who were relentless in their chase, eventually reached Guptkashi. There, Bhima, one of the five brothers, saw a bull grazing in the open field. At once, it struck his mind that this was Lord Shiva. The bull however, went underground while Bhima tried pulling it out by his tail. Although he could not extract the bull, it disappeared, only to appear later appeared at five different locations. The arms were visible at Tungnath, the hump at Kedarnath, head at Rudranath, stomach at Madhyamaheshwar and jata (locks of hair) at Kalpeshwar.

All other Panch Kedar temples employ priests from South India to conduct the rituals and religious ceremonies. Tungnath Temple, however, appoints priests who are Maithani Brahmins belonging to Mukka village (located in the Rudraprayag district in Uttarakhand).

With the onset of winters though, the statue of Lord Shiva is moved to a place called Makkumath, situated at a distance of 19 km approx. The sub zero temperature in Tungnath makes it quite infeasible for pilgrims to visit it. During the winters, even Makkumath becomes mostly inaccessible due to heavy snow which blocks all roadways. The best time to visit it, therefore, is during the summers. This, coincidentally, is also the time when the temple is opened to devotees and pilgrims.

Popular Treks to Do in Uttarakhand

Compared to the other pilgrimage destinations in Uttarakhand, the trek to Tungnath is relatively easier. It is reached by a 4 km trek which commences from Chopta. After covering that distance, another 1.5 km takes you to Chandrashila. The views which greet you on the way though, are truly spectacular.

This holy destination sits atop a ridge which divides the waters of the Mandakini and Alaknanda Rivers. The road to Chopta is located just below this ridge. The trekking route between Chopta and Tungnath is dotted with wooded hills clothed with rich alpine meadows. From Chandrashila, the views that greet you fills you with sheer bliss. You are treated to views of the Himalayan range which include peaks of Nanda Devi, Panchachuli, Kedarnath, Chaukhamba and Neelkanth. Naturally, the Chopta Tungnath Trek is extremely popular.