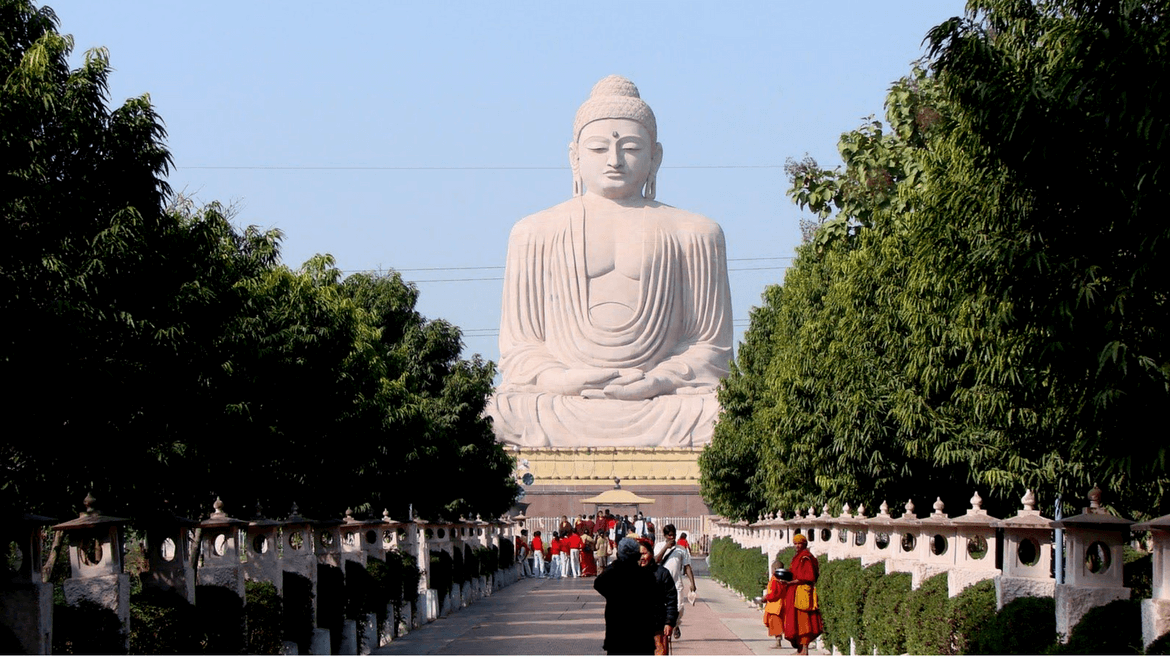 Sometimes all you desire from a tour is peace of mind, what you seek is a place where you can let your hair down and spend time contemplating the serene and spiritual surrounding. You require moments of sheer tranquillity, a place where you can unwind and revitalize your spirit. Well, meeting your expectation, Buddhist Circuit is just the right type of tour for you! It is one of those expeditions that instantly transport you to an era of wisdom, serenity and enlightenment. The mighty monasteries, the lofty stupas and the ever-so melodic chants of Mantras make one forget about their anxieties and stress, trials and tribulations, and one is simply lost in the world of divinity that heals just about everything.

India is blessed with the fact that Lord Buddha walked on its land, preached to its people and attained Mahanirvana on its humble ground. There are in fact so many destinations in India that have Buddhist significance and amongst them Bodhgaya (Where Buddha attained enlightenment), Sarnath (Where Buddha held his first public sermon) and Kushinagar (Where Buddha attained Mahanirvana) hold great importance for the devotees. The Sarnath-Gaya-Varanasi Buddhist Circuit is so popular amongst Buddhist pilgrims that government has decided to offer good connectivity for the three destinations. Here is all you need to know about these Buddhist pilgrimages in India:

It is here in Gaya, that Lord Buddha attained enlightenment under a Pipal tree. Gaya is situated about 100kms from Patna, the capital of Bihar. It is the second largest city and is the most popular tourist destination in Bihar. The city is established on the bank of River Phalgu and is named after the demon called Gayasur. Today, Bodhgaya is an important place of Buddhist pilgrimage in India and has a number of monasteries, which were constructed by devout Buddhists of Japan, Thailand, Myanmar and Sri Lanka. The major attraction in Gaya is the Maha Bodhi Temple or the Vishal Buddha Mandir that has a mammoth statue of Buddha in a deep meditation. Then there is the Pipal tree that is situated on a huge platform; it is believed that this tree is the offspring of the actual tree under which Lord Buddha attained enlightenment. The Chaukramama or the Jewel Walk is yet another place of interest in Bodhgaya; it is said that this was the spot where Buddha used to come for a stroll.

Sarnath is situated about 11kms from the holy town of Varanasi. It is a place where Budhha after attaining enlightenment proceeded to deliver his first sermon on wisdom. Today, Sarnath is one of the most important Buddhist places of worship in India. The main attraction here is the stupa that was erected by Emperor Ashoka in 3rd century BC. Other major attractions in Sarnath are Chaukhandi Stupa, which is believed to have been constructed during Emperor Ashoka’s reign; it is in fact the first monument encountered after entering Sarnath. Another important place to see in Sarnath is the Dhamek Stupa, which is a conical structure that signifies the place where Buddha delivered his first teachings of the Four Noble Truths. Mulagandha Kuti Vihar and Sarnath Museum are yet other major attractions for the tourists in Sarnath.

Kushinagar is located about 53 km from Gorakhpur and is believed to be the place where Lord Buddha attained ‘Maharparinivana’- the highest stage of salvation. After the excavation in 1861 many stupas related to Buddha resurfaced in Kushinagar and today they are amongst the major tourist attractions here. The Ramabhar Stupa is one of the major attractions; this stupa is about 50 feet tall and situated where Lord Buddha was cremated. Mahanirvana Temple, where a six meters long Buddha statue in reclining position is kept; Mathakuar Temple, where a black stone image of the Buddha and inscriptions dating back to 10th-11th century are kept; Watt Thai Temple; Japanese Temple, where ‘Eight Metals’ statue of Lord Buddha is kept and the Chinese Temple, which is predominantly constructed in a Chinese architectural style are the other places to see in Kushinagar.

Popular Hindu Temples in the Himalaya

Situated on Indo-Nepal border and in Siddharth Nagar district of East Uttar Pradesh, Kapilvastu has immense historical significance and is known as the place where Lord Buddha was born. The place has several Stupas and in the archaeological excavations stone caskets containing relics believed to be that of Buddha have been found. The major tourist attractions in Kapilvastu includes Stupa Complex, where the inscriptions of ‘Deoputra’ (Kanishka of the Kushana Dynasty) can be found; Palace Site is yet another attraction and is believed to be the ruins of the palace of King Shuddhodhan, the father of Prince Gautam.

Sankisa is situated about 47kms from the Farrukhabad in Uttar Pradesh. This small town is quite a popular Budhhist place in India as it is believed to be the place where Buddha descended after giving sermons to his mother in heaven. The ruins of many stupas and monasteries had been found here. Saniska is known for a temple dedicated to Bisari Devi and an excavated Ashoka’s elephant pillar. There is a Buddha Temple, which is believed to be at the spot where Lord Buddha descended from heaven; The Temple of Maya Devi, where the walls of the temple bear Buddhist sculptures dating back to the Mahayana age; Shiva Linga, a colossal Shiva Linga is also an attraction for Hindu devotees here. In Saniska, a large fair called Shravan Mela is held annually, which draws large numbers of Hindu devotees to Sankisa every year.

Sravasti (ancient Savatthi), which was the capital of ancient Kosala Mahajanapada is an important Buddhist destination. It is believed that Lord Buddha and his disciples stayed and preached 24 years in this city. This city has several age-old stupas, monasteries and temples. Some of the major attractions include Sahet, where Budhha is believed to have lived for 24 years; Mahet, where once was a fortified city and Jain Temple thatwas the birthplace of the third Jain Teerthankara, Swayambunatha. There are a number of monasteries such as Sri Lankan, Chinese, Myanmarese and Thai. The World Peace Bell is yet another place of interest in Sravasti and is established by Japanese devotees.

Buddhism influence can be seen majorly in Ladakh region of Jammu & Kashmir state. The age- old culture of Ladakh can be seen in its ancient monuments, monasteries, oral literature, art forms, fairs and festivals. Ladakh is a place where all occasions- marriage, birth and harvesting are marked by feasting, dancing and the singing of folk songs. There is large number of beautiful monasteries that one can visit here and amongst the most famous ones are Shey, Hemis, Thiksey Monastery, Diskit Monastery, Lamayuru, Spituk, Alchi, Phyang and Rangdum.

Sikkim is a popular Buddhist destination as it has about 200 monasteries belonging to the Nyingma and Kagyu order. Buddhism in Sikkim has not only influenced the local culture but has also influenced the lifestyle of the people. Even though Sikkim never got the privilege to experience the physical presence of Buddha, yet his words of wisdom influenced the life in Sikkim and this has what made it one of the most important Buddhist pilgrimages in the country. The most popular monasteries in Sikkim include Pemayangtse, Rumtek, Enchey, Phensang, Phodang, Labrang, Tashiding, Pal Zurmang Kagyud, Tsuk-La-Khang, Ralong, Sanga Chelling and Dubdi.

Top 20 Things to Do and See in Sikkim

Other Buddhist Sites in India

Apart from Sarnath and Gaya, there are many other significant Buddhist pilgrimage centres in India like Dharamshala and Tabo Monastery in Himachal Pradesh; Nalanda, Rajgir and Vaishali in Bihar; Sanchi in Madhya Pradesh; Ajanta & Ellora in Maharashtra; Tawang Monastery in Arunachal Pradesh; Nagarjunakonda, Bavikonda, Thotlakonda, Salihundam, Amaravati in Andhra Pradesh; Ratnagiri, Lalitgiri and Udayagiri in Odisha also have great importance as a Buddhist education sites in India. Each of these Buddhist places and monasteries in India is worth visiting as they offer an insight into the life of Buddha. These places are quite inspirational and urge one to find a Buddha inside oneself.