The Eastern Ladakh’s Rezang La houses the symbol of courage of the Indian Army; a revamped war memorial which was inaugurated by our defense minister Rajnath Singh on Thursday (18 November 2021). Built in 1963, Rezang La Memorial is a symbol of determination and indomitable courage by our Indian Soldiers. It is a place where many Indian soldiers sacrificed their lives to protect our country from China in 1962. The battle restricted China to enter Leh during the war. Rajnath Singh paid tribute to 114 soldiers who died during the battle at Rezang La on 18th November 1962.

Rezangla War memorial was constructed in 1963 at an altitude of 15,000 ft in Chushul plains close to India- China Border in the memory of Charlie company of 13 KUMAON Regiment who died while defeating Rezang La from Chinese troops. The memorial is one of the best places to visit in Ladakh to get useful insights on the legacy of Indian soldiers. The memorial is renovated without harming the structure and sentiments attached with it. The double storied museum, a mini theatre to screen documentaries of the battle, a large helipad and many other tourist facilities makes this place one of a kind. If you are planning a Ladakh tour and visiting the attractions of Eastern Ladakh, then do visit Rezangla Memorial to enjoy the best of Eastern Ladakh tourism. This place is nations’ precious asset.

There is no best time to visit this place. You can visit Rezang La memorial throughout the year. 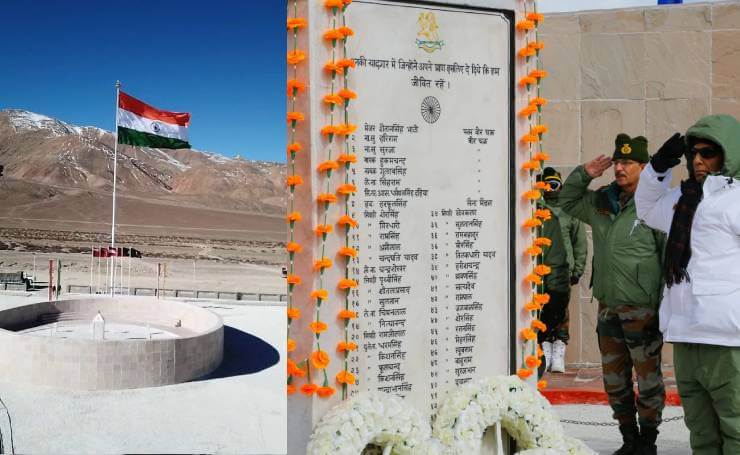 The inauguration of this revamped war memorial is a symbol of the determination of India to respect the fearless spirit of the country’s soldiers and also a strong message to China that no one can threaten the sovereignty and integrity of the country.

This war memorial has been thrown open at a time when India and China were going through a bitter border conflict in eastern Ladakh for one and half years.

Last year in Pangong Tso the border conflict arose between Indian and China as the two parties were positioned close to each other with their tanks and troops to keep an eye on Pangong Tso. 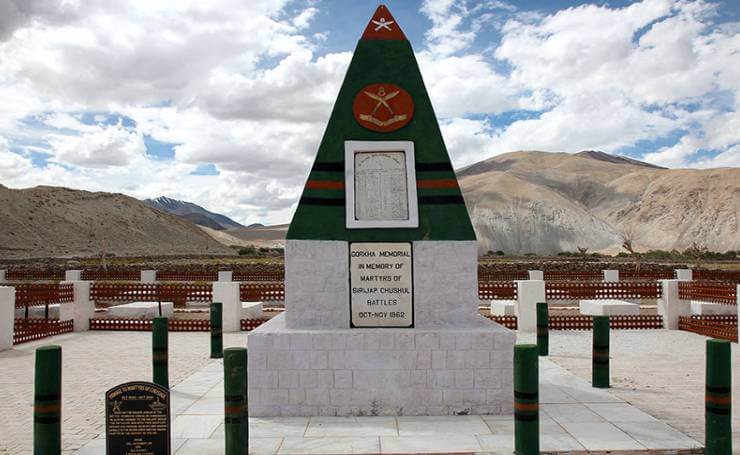 “It will bolster the feeling of nationalism and encourage tourism and the renovation of the memorial is not only a tribute to our valiant armed forces, but also a symbol of the fact that we are fully prepared to protect the integrity of the nation. This monument symbolizes the government’s stand of giving a befitting reply to anyone who threatens our sovereignty and integrity, Said Rajnath Singh on Thursday while giving a tribute speech.”

Rezang La Memorial is indeed a place to behold on your Ladakh Tour not because it’s one of the most extraordinary symbols of courage of our brave Indian soldiers but also because the pleasant vibe and the scenic atmosphere of the place will take your breath away. Located away from the hustle and bustle of the city in Chushul village, it might turn into a very peaceful getaway in Ladakh to fine tune your spirit. Visit it once to feel the serene vibes.

Rezang la War Memorial is located in Chushul plains at an altitude of 15000ft.

Q.What is so special about Rezang La Memorial?

Rezang La memorial was built in 1963 in the memory of brave Indian soldiers who died protecting Rezang La from Chinese troops.

You can visit Rezang La memorial any time of the year to cherish the contribution of the country's brave soldiers.