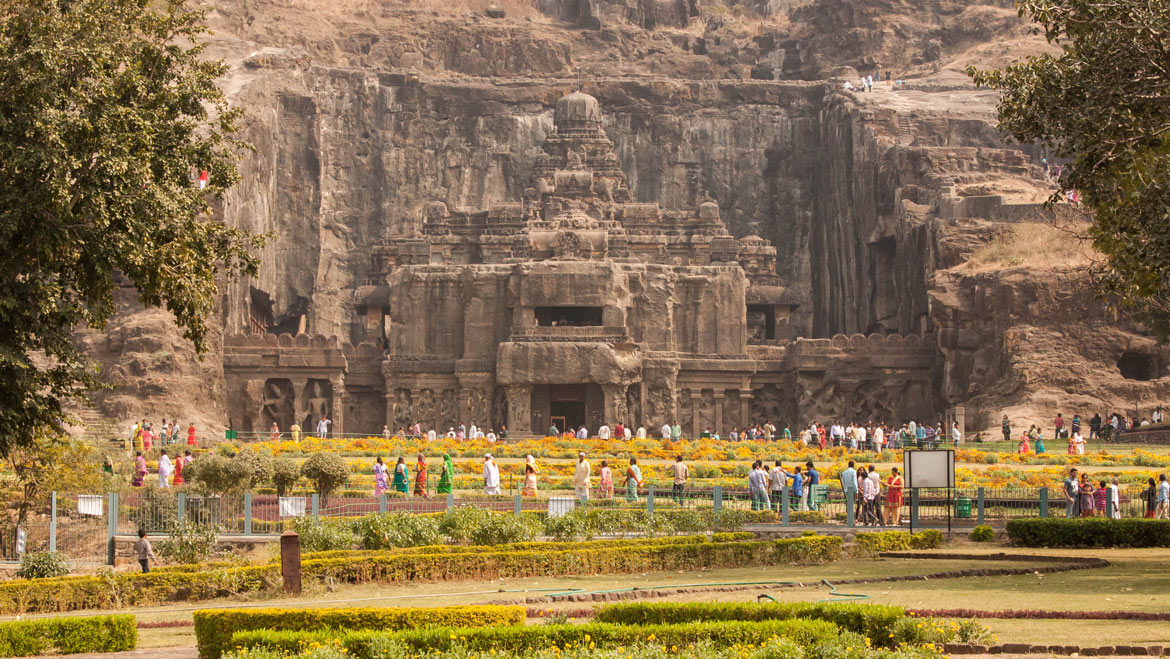 India, the land of impeccable natural beauty is dotted with innumerable caves that rightly states about the grandeur of its natural landscapes. Just like the unprecedented climatic variation in different parts of the country, the caves do depict a varied scenic charm and interest every travel loving soul. While the caves of Ajanta and Ellora seek attention of the travellers for depicting best work of art reared and nourished in medieval age the caves in Bhimbetka bear the witnesses of the pre-historic and Palaeolithic Age. On the other hand the caves in North-Eastern state of Meghalaya amuse the spelunkers for their impassable length, mysterious turns, deep waterbodies and utter darkness. Exploring these caves enriches the travellers with information which are worth collecting to fill the knowledge bank.

The followed list of unbelievably long, dark and mysterious caves of India is a must read: 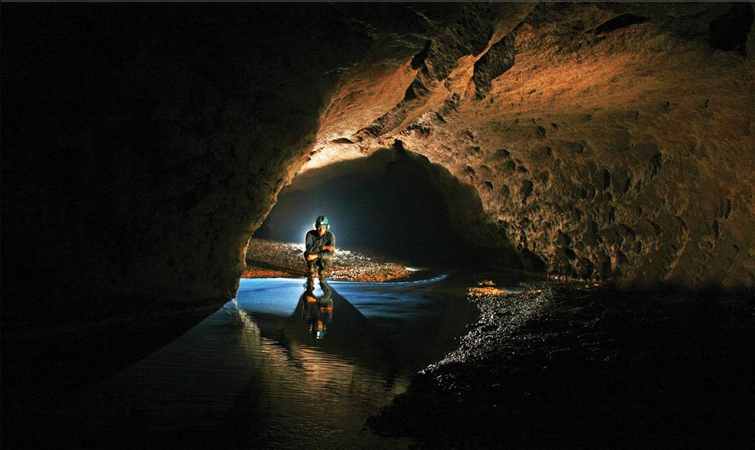 Claimed to be the longest ever cave system in Indian subcontinent, Krem Liat Prah is located in Meghalaya’s Jaintia Hills District. The linking of the Krem um im-Liat Prah cave system to Krem labbit (Khaidong) creates a single cave system of 22,202.65 m. The cave is situated at Shnongrim Ridge and fascinates the aficionados of spelunking. The most significant feature of Liat Prah is the Aircraft Hangar, an enormous trunk passage. 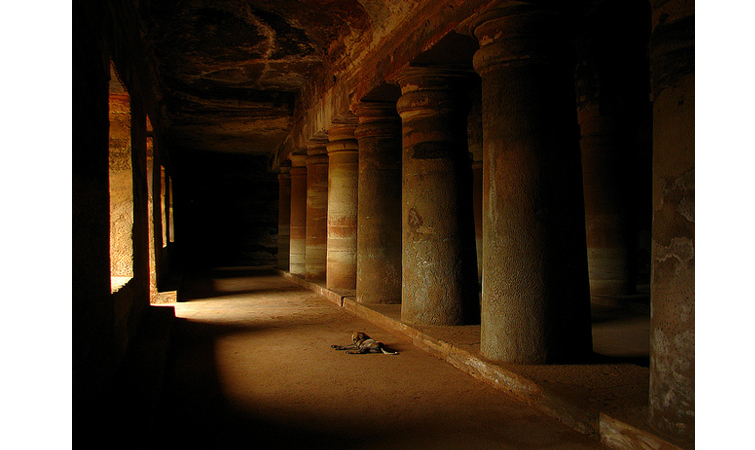 Located at a distance of around 97km from Dhar Town in Central India (Madhya Pradesh), Bagh Caves are assimilation of around nine rock-cut monuments. A must explore getaway for the travel buffs who are avid lovers of painting and ancient work of art, this cave depicts interesting mural paintings brought into life by the master painters of the country. This artificial caves is carved out by the renowned architects on perpendicular sandstone rock face of a hill which is situated on the distant banks of river Baghani. Dug out by Savannah, these caves are the seats of Buddhism are designed in quadrangular plan. 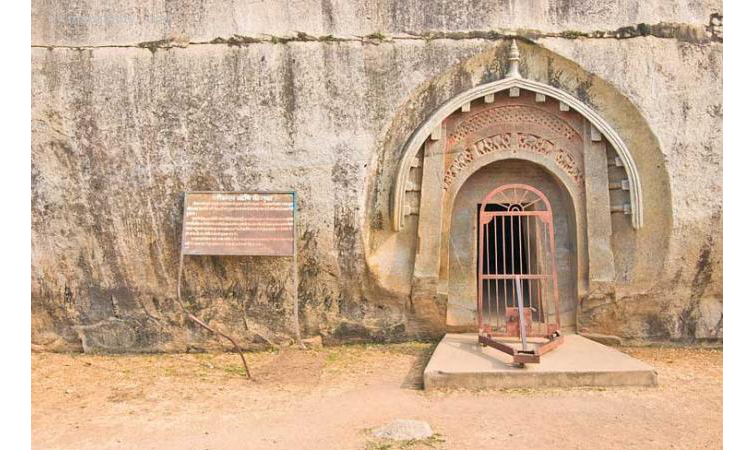 Located in the Bela Ganj Block of Gaya district, Bihar, Barabar Caves are a group of rock cut caves which date back to 264-225 B.C. Four separate chambers of this cave are designed according to the instructions of Asoka with a high polish by the stone masons. The caves of Lomas Rishi and Sudama have strong resemblance with beehive huts formed with bamboo, wood, and thatch. The Sudama cave encloses a barrel-vaulted chamber which is known as Nigoha-Kubha or Banyan tree cave. The facade of Lomas Rishi Cave exhibit horseshoe-shaped gable which have fine detailing on it. 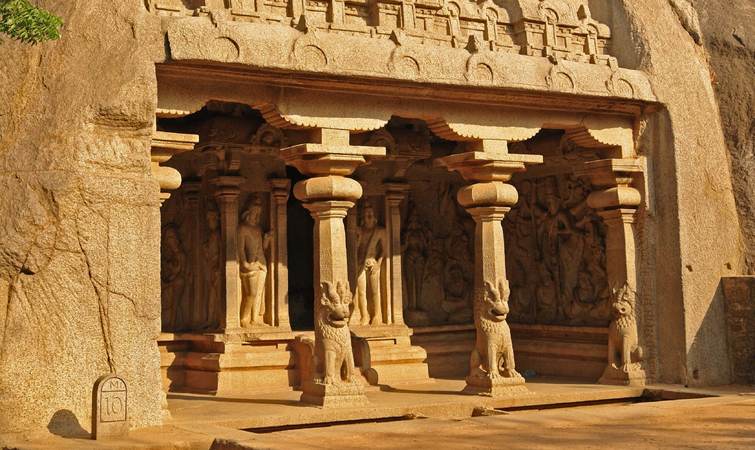 A specimen of 7th century work of art, Varaha Cave Temple is a UNESCO World Heritage Site in Mamallapuram. The greatest example of rock-cut architecture flourished during Pallava Dynasty this small jewel of South India splurges the visitors to get bathed in the pool of immense artistic gracefulness. The minute detailing on the walls, doorways and plinth of this cave temple talks about the primitive architectural reformation in the then Mahabalipuram. Temple is entered through mandapa where beautiful verandah with two pillars and two semi-columns greets the travellers. The walls of the cave depict the images of Lord Varaha (similar to wild boar) holding his wife Bhumi. The cave temple of Varaha is claimed to be one of the greatest works of Pallava art. The cave depicts early stage in Dravidian architecture with Buddhist designs working simultaneously. 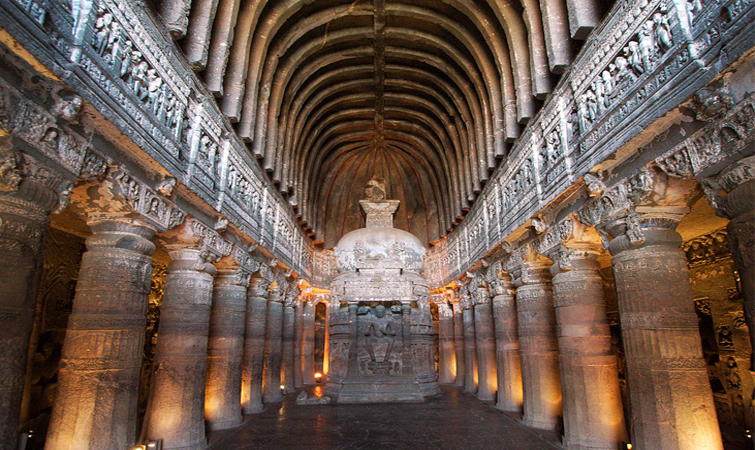 One of the most attention-seeking architectural grandeurs in the glorious historical past of India, Ajanta Caves is located at a distance of 55kms from Jalgaon city and 105kms from Aurangabad City of Maharashtra, India. This chain of caves encloses total 30 blocks among which cave no 9, 10, 19, 26 and 29 are chaitya-grihas. Other caves are monasteries. Most of the paintings in Ajanta date back to earlier 2nd century BC-AD while a lot of paintings are of around 5th century AD. The paintings of this cave display are mostly inspired by religious ideology of Buddhism. The paintings are executed on mud-plaster grounds in the tempera technique. 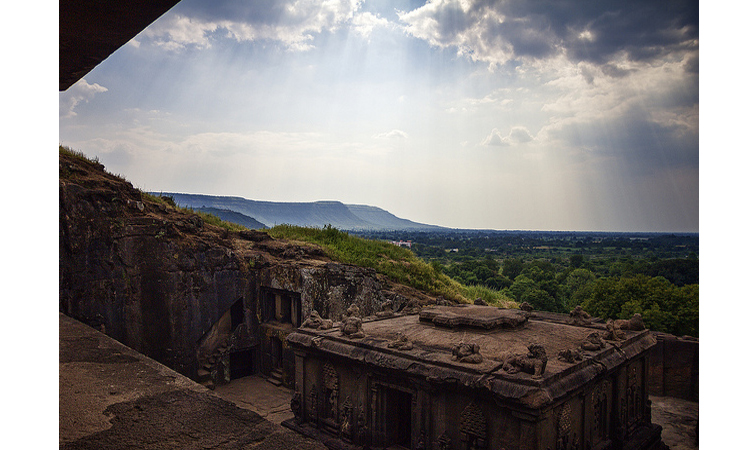 One of the greatest achievements of the Rashtrakuta Dynasty, Ellora Caves calls a huge crowd for its religious seats of Hindu, Jaina and Buddhist sects. Carved out between the 6th and 10th centuries AD this cave temple encloses the famous temple of Kailasnath which is carved out of a massive single rock. These caves are dedicated to Viharas and Mathas. There are 12 Buddhist caves, 17 Hindu Caves along with 5 caves dedicated to Jaina mendicants. 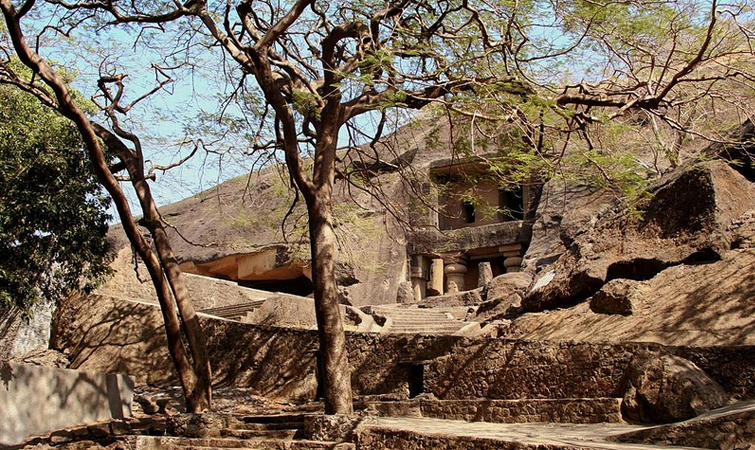 One of the few caves in India that hardly needs an introduction, Elephanta Caves is located on an island hill of Raigarh District of Maharashtra. It is around 11km north-east of the Apollo Bandar, Mumbai and 7km from the shore of the mainland. A UNESCO World Heritage Site, this rock cut cave temple is engraved with keen detailing and exhibits Shiva and his different forms through stone images. The island on which this cave temple is found has been ruled by several significant dynasties of the past including the Chalukyas of Badami, Rashtrakutas, Kalyani Chalukyas, Yadavas of Deogiri, and Muslim rulers of Ahmedabad and at last by the Portuguese. There are seven cave excavations in the Elephanta group which date back to circa 6th–7th centuries A.D. Among all of these cave excavations, Cave 1 is the most striking as it represents the developing phase of Brahmanical rock-cut architecture. Every evening excursion are organised from Gateway of India to Elephanta Caves. 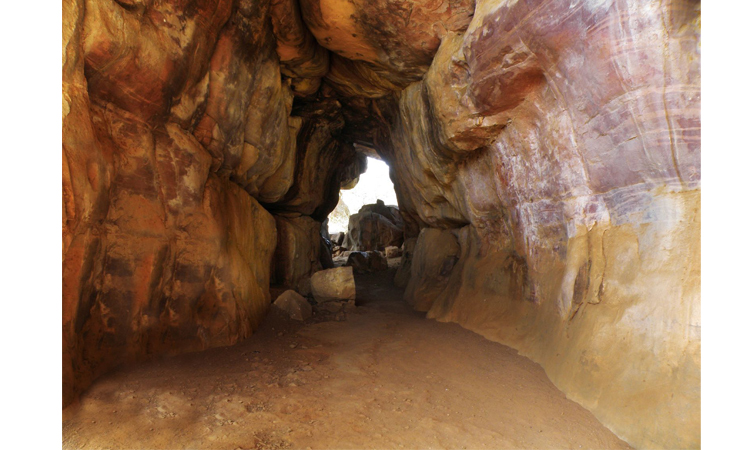 An exclusive UNESCO World Heritage Site at a distance of around 45km northeast of Bhopal, Madhya Pradesh, Bhimbetka is situated along the Bhopal-Hoshangabad highway. A repository of the earliest rock carvings, cave painting and other means of human expressions, Bhimbetka Caves are found amidst lush greenery endorsed environment, rocky terrains and arduous cliffs. This unique museum displays all prehistoric creations of primitive men some of which are even 30,000 years old. Some of the rock paintings of Stone Age represent the oldest dance forms. The cave is located inside the Ratapani Wildlife Sanctuary. 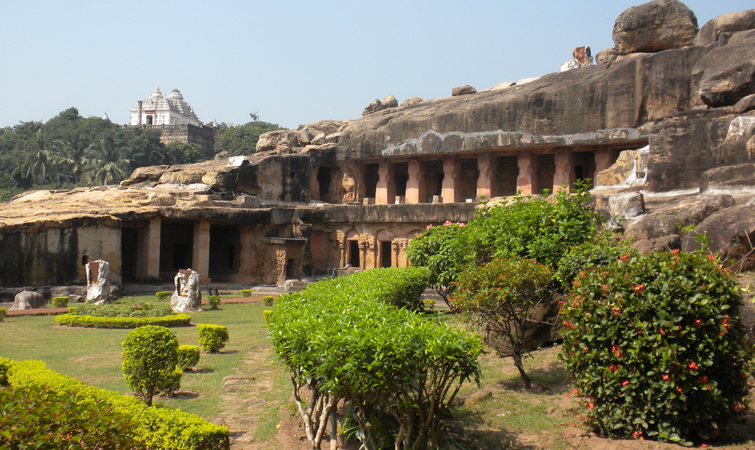 Located at a distance of only 9.5km from Bhubaneshwar, the capital of Odisha, Udayagiri and Khandagiri are two adjacent caves known across the globe for their historical, religious and mythological significance. According to the archaeologists, the caves were carved out as residential blocks for Jain monks during the reign of King Kharavela. There are total 18 caves in Udaygiri and 15 caves in Khandagiri. Hathigumpha and Ganesh Gumpha are the most popular blocks in this cave complex as one can see the best collection of artworks and relics in these caves. 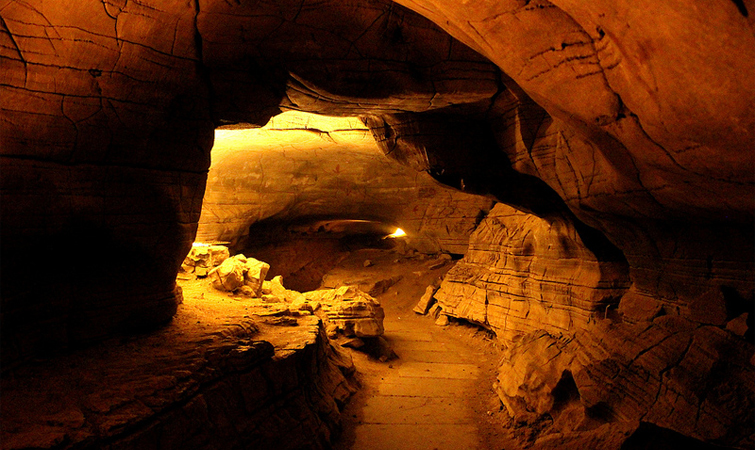 Claimed to be the second longest cave in the plains of India, Belum Caves is located in the Kurnool city of Andhra Pradesh and appears as a must see cave in India for the lovers of architecture, thrill and mystery. The cave extends to the length of around 4km and embraces long passages, spacious chambers, fresh water galleries and siphons. This natural underground cave is formed by the constant flow of underground water. The cave reaches at a depth of 150m at a part of the cave called Paatalganga. The cave is formed in black limestone and is rich in deposits of quartz. Though the entire cave is explored by the experts but only 1.5 km area is open for tourists. There are 16 different pathways to enter this cave. 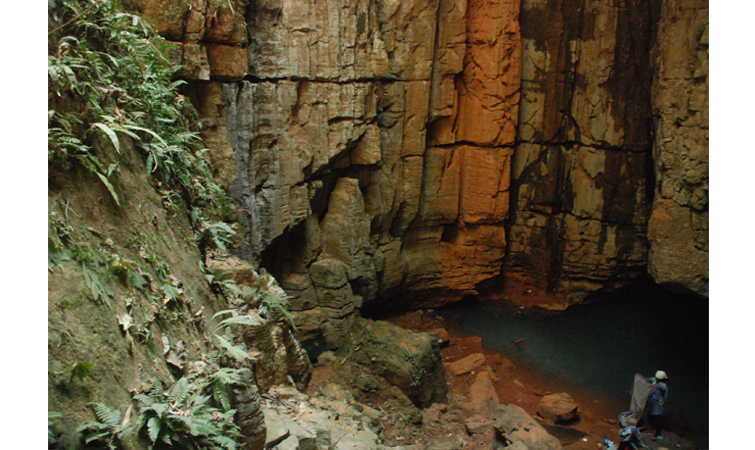 Krem Kotsati is the third longest and largest cave in the north-eastern state of Meghalaya and extends to a length of around 21.5km under Jaintia Hills. The cave consists of a few Virgin River passages. There are total 8 entrances to this cave among which the one passes over a deep pool serves as the most enthralling one. The cave of Krem Kotsati is an amalgamation of many caves among which Krem Umsynrang Liehwait, Krem Wahjajew are the most important.

Claimed to be the third largest cave system in India, Krem Tyngheng is a 21km long cave in Meghalaya. The cave was discovered in recent past by a group of Speleologists from the UK, Ireland, Switzerland, Austria, Romania, Germany along with the members of Meghalaya Adventure Association (MAA). The cave is located in Diengjem, Meghalaya (Jaintia Hills). 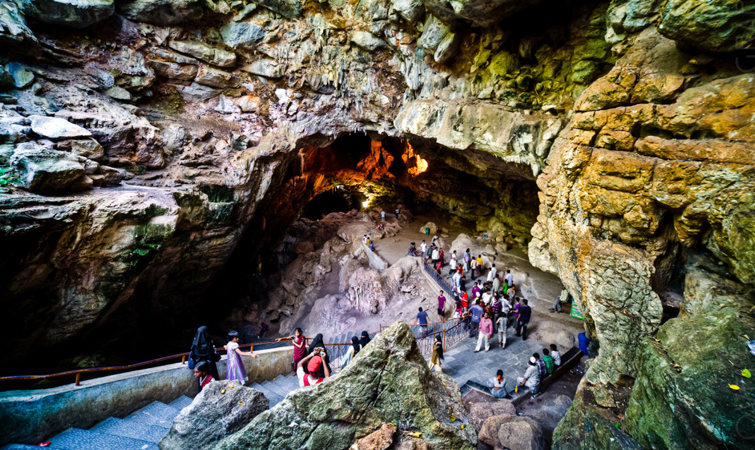 Located at a distance of around 92km north of Visakhapatnam Borra Caves is an easy to access cave. Covering an area of around one sq km this cave stands as the originating point of river Gosthani. The Borra Cave opens with 100m on horizontal plane and around 75m on vertical plane. The cave is located at a height of around 800 to 1300m from sea level and distinctly exhibits a variety of impressive speleothems. The cave encloses well structured steps attached with strong railings what enhance accessibility to this cave. 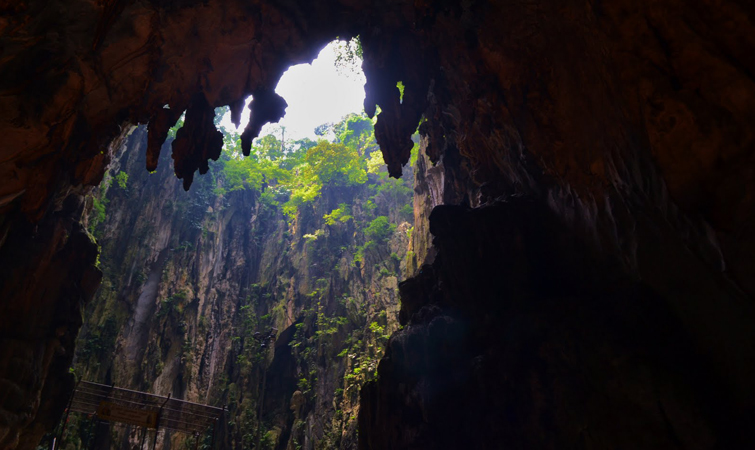 A 1327m long cave in the Kanger Valley National Park of Bastar, Chattisgarh- Kutumsar is one of the must see caves in India for the lovers of wild beauty. The most striking element of this cave is the stalagmite and stalactite formations. These rock formations are found at a depth of around 35m. The cave encloses 5 naturally appeared chambers and couple of blind wells.

A religious cave temple in Dakshina Kannada district of Karnataka, Nellitheertha Cave is a 200 m long natural rock formation. To enter this cave one needs to crawl on knees. There is a Shiva Lingam inside the cave along with a lake which is formed by water dripping into the cave. The droplets look like gooseberry which is called Nelli in local language.

The list was all about the caves of India which are either unbelievably long or covers a huge area. But I have a doubt if I have missed any cave which I should explore at least once in my lifetime. So, it would be great to listen from you about a few more caves which can be included in this category. Do share your experiences in case you have explored any of the aforesaid caves.

Subscribe our India Travel & Tourism Blog and stay updated with travel news, destinations and holiday ideas in India along with best holiday travel packages and offers.