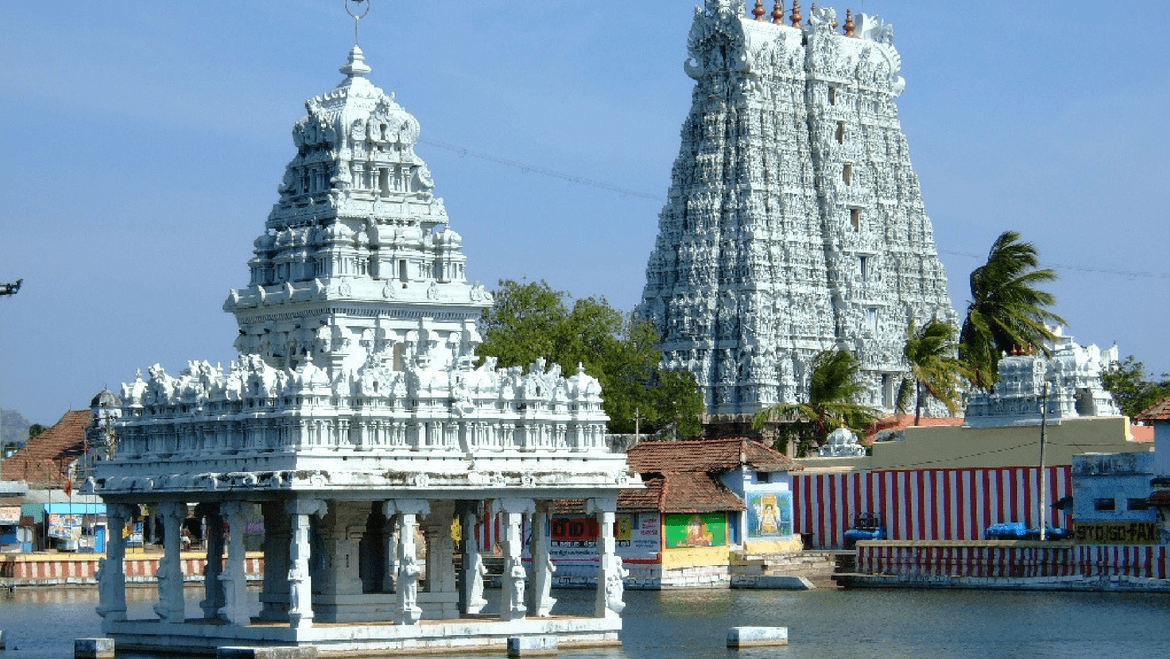 Spirituality and India are the two faces of the same coin and while talking about the southern part of India, we find this statement to be absolutely indisputable. While the rise of dynasties like the Cholas, Pandyas or Pallavas led to the construction of unprecedented variety of temples, on the other hand emergence of Bhakti Movement gave birth to a new era of religious purity.  Islamic Sufism was flourishing side by side and significantly influencing the religious scenario of Southern India. Further the foundation of Colonial Era glorified Christianity to the utmost level resulting in the growth of numerous churches that are treats to the eyes. A communion of all these beliefs purified the soil of South India and as a result, today a huge number of temples, churches and durgahs are found in this part of the country which call upon the followers of all religious beliefs to take a plunge in their sanctified charm. Let us take you on a spiritual tour of South India. Here is the list of the best religious places to visit in South India that we have sorted out for you.

Popular among the tourists for the golden habitat of Lord Venkateshwara Swami, Tirupathi is a temple city in Chittoor District of Andhra Pradesh. A city covered with lush green vegetation and not-so-high hills, Tirupati is visited by Hindus from across the world irrespective of their castes and beliefs. Tiru in Telugu means Shri (Laxmi) and Pati denotes husband. So the literal meaning of Tirupati is the husband of Laxmi, i.e. Vishnu. There are several myths and legends associated with the formation of the Tirumala Venkateswara Devasthanam and it is claimed to be the most reputed religious sites in the world in terms of visitors visiting the temple and the amount of donation it gets every year.

Did You Know: Even though Hindu married women are not supposed to shave their head, but out of devotion they often donate their hair in Tirupati.

A popular town in the heart of Ramanathpura District of Tamil Nadu, Rameswaram is associated with innumerable myths. The major attraction of this city is the Ramanathaswamy Temple which is considered to be one of the most popular Hindu pilgrimage sites in South India. Rameshwaram along with the other three temples of Dwarkadish, Puri and Badrinath complete the famous circuit of Chardham Yatra of India. Lord Shiva is the presiding deity of this temple. He is worshiped here in the form of Jyotirlinga. Thus the temple of Ramanathaswamy is counted among the Dwadash Jyotirlinga, (12 Pillars of Light). It is believed that Rama worshipped Shiva here in Rameshwaram to do the penance of killing Ravana, the Brahmin.

Located on the Vegavathy River, Kanchipuram is a city in the state of Tamil Nadu, India, and counted among the seven Indian cities where one can attain moksha. One of the most important pillars of spiritual tourism in south India, Kanchipuram houses some of the most revered Hindu temples found in India. Kanchi Matha, the headquarter of Hindu monastic institution is the most religious site of Kanchipuram and claimed to be founded by Hindu Saint Adi Shankara. Other popular pilgrimage sites in kanchipuram are Varadharaja Perumal Temple, Ekambareswarar Temple, Kamakshi Amman Temple, and Kumarakottam Temple.

Did You Know: Among the 108 temples of Lord Vishnu, 14 are found in Kanchipuram.

Popular among the believers for the auspicious Kumari Amman Temple and astonishing Vivekanda Rock Memorial, Cape Comorin or Kanyakumari is one of the most famous pilgrimage travel destinations in South India. Kanyakumari is a district of Tamil Nadu and attracts people from across the globe for being situated at the southern-most tip of Indian peninsula. The city gets its name from the temple of Devi Kanyakumari (Kumari Amman Temple), an incarnation of goddess Durga. The temple of Kanyakumari is counted among the 108 Shaktipeethas dedicated to the female form of supreme energy, Goddess Durga and visited by the unmarried girls in large numbers to get their desired life partner. However, to see the variety of temple architecture, you should explore the temples of Nagaraja Temple, Thanumalayan Temple in Suchindram, and the statue of Thiruvalluvar (next to Vivekananda Rock Memorial).

Very popular among the devotees of South India as well as other parts of the country for its Dusshera festival, Mysore is claimed to be the residence of Devi Mahishmardini. Chamundi Hills, 13km east of Mysore is the actual place where the temple of Chamundeshwari has been attracting pilgrims since ages. It is believed that the demon Mahishasura was killed here by Goddess Chamundi after a fierce and long-drawn-out battle. It is said that the name of the city, Mysore is derived from the name Mahishasur. Some of the best temples to visit in Mysore are Prassana Krishanswamy Temple, Shewtavarahaswamy Temple, and Trineswaraswamy Temple.

Called the Athens of the East, Madurai is a city in the state of Tamil Nadu  in India. Located on the banks of the Vaigai River, Madurai houses awe-striking religious sites that are worth visiting by the believers as well as the lovers of architecture. Meenakshi Amman Temple, one of the major sites for making spiritual journey to South India is the major attraction of this city. Shiva is worshipped here as Sundareswarar along with Goddess Minakshi. Koodal Azhagar Temple is a sacred shrine for the Vaishnavites where one can see the statue of Navagraha. Other prominent temples found in Madurai are Thiruparankundram, Koodal Azhagar Temple, Pazhamudhir Solai are some of the most famous temples in Madurai.

Did You Know: There are around 33,000 sculptures in Meenakshi Amman Temple and it was on the list of top 30 nominees for the New Seven Wonders of the World.

Well followers of religious beliefs other than Hinduism might think it a bit biased, as we have not discussed anything about Christianity or Islam so for. So, you might think South-India hardly has any prominent Non-Hindu religious site. But, if you are travelling to Nagapattinam district of Tamilnadu in Southern India, then you will feel amazed seeing the number of international devotees gathering here. The town houses one of the most popular churches in South India called Basilica of Our Lady of Good Health or Valankanni Church. Another major pilgrimage site in Nagapattinam District is Nagore Durgah or Nagore Sharif which was built over the tomb of Nagore Shahul Hamid. Kanduri Festival is a 14 day annual festival taking place during the Urs (death anniversary) of the saint.

Popular among the Shaivite sects of Hinduism, Thiruvannamalai is a district in Tamil Nadu. The most sacred religious site in this district is the Annamalaiyar Temple, which is counted among the Pancha Bhuta Sthalas. The lingam of Shiva, worshipped in this temple, is known as Arunachaleshwar whereas his consort Parvati is known as Unnamulai Amman. Karthigai Deepam Festival is the most auspicious occasion to be here and is celebrated during the full moon between November and December. The entire temple is decorated with thousands of lights during this festival and looks majestic from far distant areas. Tirulmalai is a popular Jaina Temple that is constituted of three ancient caves where the largest Jain sculpture of Neminatha can be seen.

This union territory might have bewitched you for its picturesque natural settings, but I am sure, you haven’t explored all its religious destinations other than the ones like Aurobindo Ashram and Auroville. If you are seeking mental peace and have already planned to explore the most peaceful ones in south India then go exploring the temples of Kanniga Parameshwari Temple, Varadharaja Perumal Temple, Manakula Vinayagar Temple or Arulmigu Manakula Vinayagar Temple.

A typical South Indian city bearing the imprints of ancient Chola Dynasty, dotted Thanjavur or Tanjore is located in Tamil Nadu. One of the most popular travel destinations in South India, the city is known among the religious souls for the magnificent Brihadeswara Temple, dedicated to Lord Shiva. The temple not only carries religious significance, but gains immense importance among the history buffs for being a UNESCO World Heritage Site. The superb style of sculpture engraved on this temple brings it the sobriquet of “Great Living Chola Temples”. Other then this temple, Thanjavur also houses quite a few spiritually enriched sites such as Thirunallar Temple, Gangaikonda Cholapuram, Keelaperumpallam Temple etc.