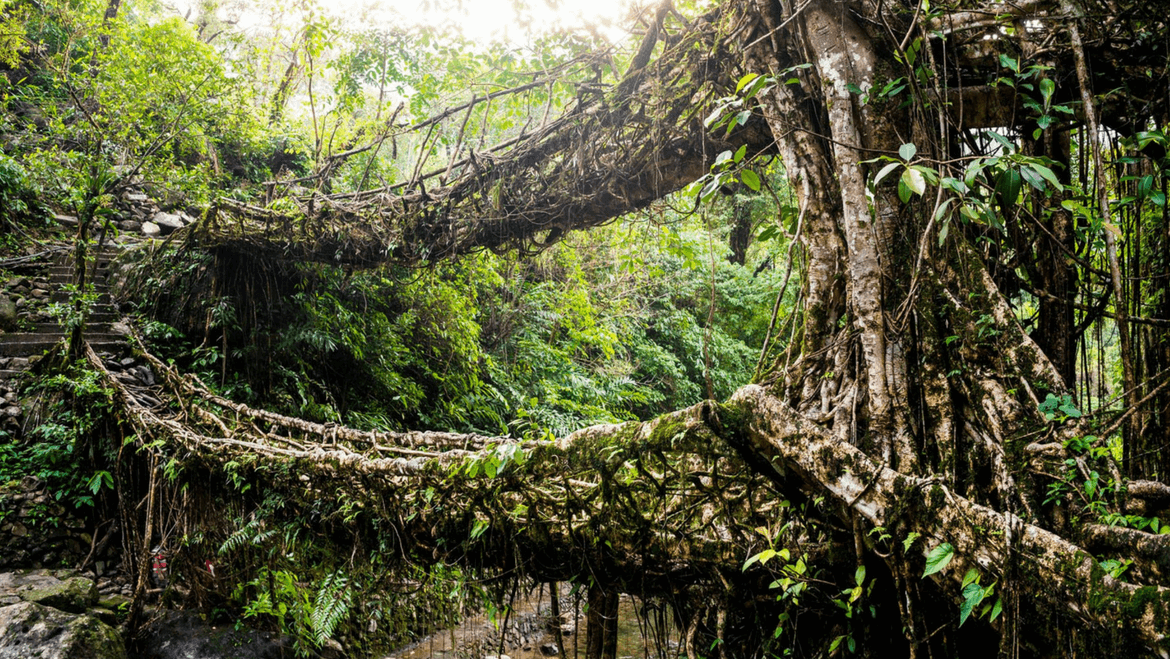 Mystery- The word when enters the ear, enthrals the nerves and puts our senses on notice!. There is no denying the fact that the hunt for reality motivates us to embark on an excursion. Just consider visiting the places that are full of surprises and enigma … Even the thought of scouting such spots evokes the adrenaline rush. Nature has always surprised humankind. Some people relate these mysteries endowed by nature with spirituality and others with the amazing secrets of nature. Whatever it may seem, these places certainly evoke curiosity in a person. Natural scientists are continuously working to find an answer for it. You will be amazed to know that India is bequeathed with myriad places that are still a riddle for scientists to decipher. For all those travelers who are bored with visiting stereotypical tourist destinations and want to unfold some of the most thrilling secrets of nature, I have compiled a list of top 20 mysterious places in India. Scroll down to know about them…

At some specific time in the past, the snowy waters of Roopkund lake melt to unfold the sprinkled skeletal remnants of 200 humans. As per the scientific researches, these humans perished in this area around 1200 years back. The famous folklores of this region state that these skeletons are the leftovers of King Jasdhava, his spouse and associates who went to the goddess Nanda Devi to pay homage. It is said that the deity became angry with them as they danced and played music on the consecrated ground. The goddess unleashed a ferocious hailstorm. The trek to Roopkund is still among the famous trekking routes in Uttarakhand.

Karni Mata Temple is positioned in the Deshnoke Town in the regal land of Rajasthan. One aspect that makes this temple unusual is the astonishing rat population in this shrine. The rats are revered here. Surprisingly, there is something like 20,000 ratsin the premises and it is believed that the food eaten by these rats becomes extremely sacrosanct. Moreover, if a rat is killed then a rat made of gold should be used as a substitute for it!

The Idukki and Kottayam districts of Kerala witnessed a strange phenomenon when the red-colored rain occurred there. This hued rainfall has occurred on myriad instances since 1986 and from that time, such type of rain has been recorded several times. The most recent one was in 2012. The solid pigments extracted from water were identical to biological cells.

Jatinga Village is located in Dima Hasao of Assam. This place is more often than not the talk of town as well as among the explorers and scientists because of the mysterious bird suicides that happen here. A horde of migratory birds comes here in the evening, especially in the months of September and October, to crash themselves to death. Several efforts were made by the scientist to solve the mystery of Jatinga.

Floating Islands offer a strange spectacle with immense assortment of foliage. These isles are flawlessly circular in form, floating on the surface of Loktak Lake. These verdant islands are known as Phumdis and are the bunch of flora, soil and several other organic matters. Some of these floating ‘island’ are so huge that many resorts have been constructed on them.

You must have heard of the Great Wall of China, right! Well you will be surprised to know that Kumbhalgarh fort also boasts a gigantic wall that is built around the periphery of a fort; it stretches over a distance of 36 kilometres. This wall is among the preserved heritage destinations in India. It is the second largest wall after that of China. Moreover, it is still unnoticed by most of the explorers. According to legends, this wall was edified to guard 3000 primeval temples located inside the fort.

Imagine yourself in a place that looks like a woodland but in fact it is just a banyan tree! Sounds exciting? The Great Banyan Tree, situated in Acharya Jagdish Chandra Bose Indian Botanical Garden near Kolkata, embraces the world’s widest banyan tree. This tree is immense beyond imagination and is 250 years old. The original trunk of this tree seems to be lost in the cluster of the roots and the aerial roots make it appear like a forest. Interestingly, these roots are 25 meters above the surface!

On the Magnetic Hills of Ladakh, the car seems to roll uphill on its own. The magnetic features of the hill are the reasons behind these cars being apparently attracted. It is in fact an optical illusion, which is related to the concept of gravity hills. This mysterious spot effectively draws the attention of the tourists on their trip to Ladakh.

Do you remember those hilarious confusions in ‘Seeta aur Geeta’ and ‘Judwa’? Let me take you to the place where you can witness it in reality! It is a small village in Kerala- Kodinhi. In this village, there is a high number of twins. The population of the area is 2000 of which 350 are twin pairs. Scientists have been left dumbfounded to explain the reason behind this ‘Judwa’ phenomenon of Kodinhi.

This amazing and mystifying lake was formed when a meteorite hit the land surface and created a crater. This lake finds a mention even in ancient literature like Skanda Purana. One of the distinct features of this lake is that it is both saline and alkaline in nature.

You must have heard about the story of the Ramayana and know how a bridge was built over the sea to reach Lanka. Well, it is very much in reality as well. The remnants of such stones are still found in Rameshwaram. The name of Lord Rama is still engraved on these stones and they float when kept in the vessel full of water.

There is an unusual formation of trees in the gradients of Khasi and Jaintia Hills in Cherrapunji. There is a rubber tree having 3000 feet long roots slinking its way along the gradient. The trees stick to the upper area and the roots are elongated to the riverbed hence providing natural bridges between the rivers. This mystifying sight bewitches the mind of the tourists instantly.

In some places, beliefs seem stronger than scientific theories. One such place is the town of Shivapur near the commercial capital of India- Mumbai. The strange element of this place is that there is a stone of 200 kg weight in the shrine of Qamar Ali Darvesh and this stone can be lifted only when eleven men raise it with their index finger. Moreover, there is a condition that the name of the saint should be chanted while lifting the stone otherwise the attempt would be unsuccessful. It is certainly a place ought to visit on Mumbai sightseeing tour.

The monasteries in India are usually horded by tourists, but let me take you to one of the loneliest monasteries around the globe. The Phuktal Monastery is something that is hidden in the Zanskar. It is constructed into a cave that faces a cliff. This monastery amalgamates with its sandy ambiance in Zanskar Valley. To reach here, one has to carry out a trek from Padum. It is hard to imagine that how this monastery was edified in 12th century. This trek is one of the tough treks in Ladakh.

The Shani Shignapur Village in Maharashtra is a unique village where no house has doors. Moreover, they do not lock their precious things. It is believed that Lord Shani protects the village and he will punish the person who tries to commit any kind of crime here.

Imagine yourself at a serene and imposing beach where you are basking to savor the ambiance. You will definitely love to go there on your next tour, won’t you? BUT WAIT! The next time you reach there, you would not find any beach at the same spot! Surprised? Actually, you are at the Hide n Seek Beach of Odisha, which disappears according to the high and low tides. It resurfaces when the tides are low.

Lepakshi Temple, located in Andhra Pradesh, is undoubtedly a marvel of ancient architecture. There are in total 70 pillars in the temple of which one pillar hangs without any support and surprisingly does not touch the earth as well! Tourists use to pass thin objects under it to check whether the claims are true. As per the local faith, passing objects under this pillar brings happiness in one’s life.

The enormous balancing rock, also known as Krishna’s Butter Ball, is a prime tourist attraction in Mahabalipuram. This rock is 5 meters in diameter and is positioned on a smooth gradient. It seems to defy all the laws of physics. It offers shed to all those who dare to sit underneath it.

Enigmatic sounds like a sonic boom of an airplane have been heard frequently in the Ganga and Brahmaputra Delta. The mystifying aspect of these sounds is that they have been heard even before airplanes were invented. These sounds have always puzzled the experts. Whatever be the reason behind the unusual phenomena associated with these mysterious places, they are indeed the major points of attraction for the globetrotters on their tour to India. These unique spots offer something different to experience, certainly not like the conventional trips that almost every tourist carries out!