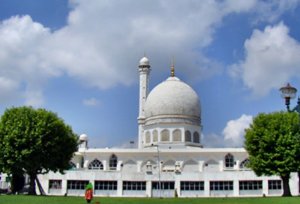 On the left bank of Dal Lake lies the most peaceful and holy place of Jammu and Kashmir the Dargah Hazratbal. This shrine holds a very high reputation by all Muslims in India. The temple houses an important relic Moi-e-Muqaddas sacred hair of Prophet Muhammad. It took approximately 11 years to complete the Mosque and it is the only domed Mosque in Srinagar. It offers such an enchanting vista of lake and mountains that has made it so serene. Even the entrance makes you agape with the view of Nishat Mughal Garden. Hazratbal is an epitome of love and respect for Prophet Muhammad by Muslims.

The sacred hair was brought to India by Syed Abdullah in 1635. He was a descendent of Prophet Muhammad. The hair was inherited by Syed Abdullah's son Syed Hamid after his death. As the Mughal conquered they stripped Syed of his family estates. Falling to which he had to sell the relic to a Kashmiri businessman Khwaja Nur-ud-Din Eshai.

Aurangzeb confiscated the relic and sent it to Shrine of Khwaja Moin-ud-Din Chishti in Ajmer and imprisoned the businessman. Upon realizing his mistake he released the businessman and sent him home with the relic along with an escort. He died on the way and his daughter Inayat Begum became the custodian of relic.

Gardens: The gardens of the city date back to the Mughal Era. Visit the Shalimar Bagh that was built by Mughal Emperor Jahangir for his beloved wife. Visit Nishat Mughal Garden to enjoy the mesmerizing view of Dal Lake, this was built by Emperor Shah Jahan after he became the Emperor of India. The Botanical Garden is famed for its awe inspiring Tulip cultivation and Tulip Festivals that are held.

Lakes: No visit to the valley is complete without visiting the two lakes of Srinagar. The lakes are filled with thousands of houseboats and staying a day in these houseboats is highly recommended. Dal Lake is the big lake of Kashmir and the Nigeen Lake the smaller one. The most mesmerizing point is the floating gardens on Dal Lake.

Old City: The old city of Srinagar is a must visit location. It displays a very splendid wooden work throughout the city. There are many mosques that promise tranquility like never before. Jama Masjid the biggest mosque of Srinagar. There around 350 plus wooden Deodar pillars that holds the roof for thousands of devotees. On the other hand Shah Hamdan Mosque is the vivid description of Kashmiri art on wall, ceilings and chandeliers. The old city also offers many sightseeing and viewpoints that could amaze anyone.

By Air: Srinagar has International and domestic airport of its own with flights to all major places.

By Rail: Srinagar has a Railway station and has trains available for major destinations in India.