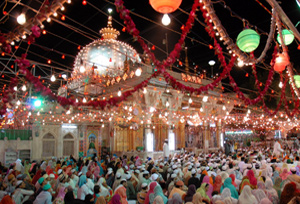 The Dargah of Khwaja Moin-ud-din Chishti is the most revered shrine of Muslims not only in Rajasthan, but in India also. The shrine is known as Ajmer Sharif, it encapsulates the mortal remains of the famous Sufi Saint Khwaja Moinuddin Chishti. Situated in the city of Ajmer in Rajasthan, this shrine is visited by people of all religions, cast and creed. The Dargah is a living example of Mughal Architecture and their faith. The daughter of Mughal emperor Shah Jahan had established a prayer room especially for the woman followers. It is believed that people who visit the shrine and pray with a pure heart and soul often get their wishes granted and with his blessing they will be free from desolation.

The Dargah is a tomb of the Sufi saint Khwaja Moin-ud-din Chishti. He came to Ajmer from Persia in the year 1192 and continued to preach Islam until his death in 1236. The shrine is not only meant for Muslims but also for the followers of other religions and faith as well. The tomb gained its importance during the Mughal Era. Many constructions were brought to the tomb as many building were added. The construction of the shrine was done by Humayun and the gate by the Nizam of Hyderabad but additions kept on coming as many emperors kept visiting the holy place. 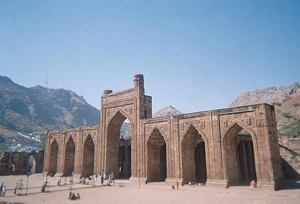 Adhai-din-ka Jhonpra: This is a marvelous structure which is a masterpiece of Indo-Islamic Architecture. The legend associated with the name tells that the construction took only two and half days to complete. It was built by Mohammed Ghauri in 1193.

Ana Sagar Lake: This is a manmade lake built by Anaji Chauhan grandfather of Prithviraj Chauhan. The lake took 15 years for construction from 1135 to 1150. Apart from Anaji many emperors added constructions for the beautification of the lake. The lake is surrounded by pavilions and parks and also encloses an island which could be reached by boats.

Taragarh Fort: Also known as the Fort of Ajmer. It was built by Ajaypal Chauhan in 1100 A.D and is considered as the oldest hill fort in Asia and the world.

Pushkar: The holy city of Pushkar is just 15km from Ajmer. One can enjoy street shopping, and dishes. The Brahma Temple in the city is the only temple dedicated to God Brahma. There are many temples and café in Pushkar that promise one of a kind experience.

By Air: The nearest international airport is in Jaipur at a distance of 132km. A new airport has been inaugurated by the Prime Minister Mr. Manmohan Singh and it will commence its services from 2016.

By Rail: Ajmer has its own Railway station. It offers as a junction.

By Road: Ajmer is well connected by major cities in Rajasthan like Jaipur itself. It lies on the Golden Quadrilateral National Highway 8.