Top 15 Must Visit Stupas in India 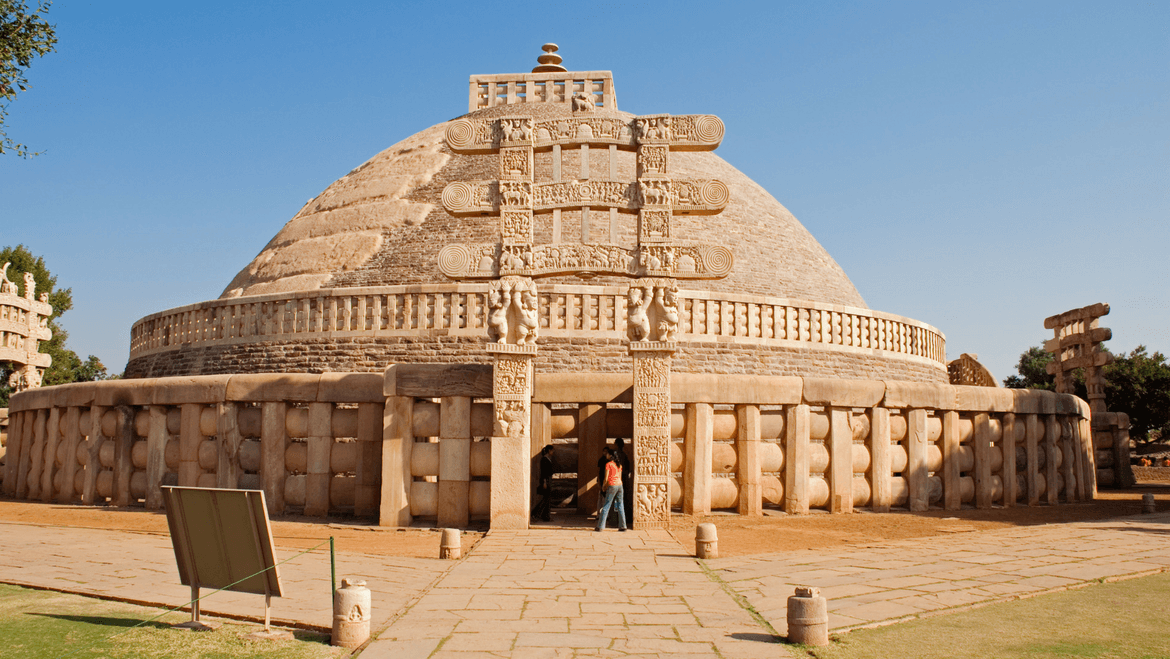 The diverse landscape of India has always been a major tourist attraction, yet one who has been in India takes back not only the moments captured in their frame but also the nitty-gritty of Indian religion. India, the etymon of ancient civilizations, ground of diverse religions and abode of many spiritual leaders, has been bestowed with a unique heritage and cultural traditions gathered through the ages and have also been graced by many luminous personalities. Today Buddhism is one of the major religions in the world. The doctrine of Buddhism is grounded on the practices of Lord Buddha (563 and 483 BC), also known as Siddhartha Gautama, the royal prince of Kapilavastu, India. After springing up in India, Buddhism spread throughout Central Asia, Sri Lanka, Tibet, Southeast Asia, as well as the East Asian countries of China, Mongolia, Korea, Japan and Vietnam.

The Buddhist Circuit in India drives you through various sites of Buddhism; sites where Lord Buddha was born, attained enlightenment, preached the first Sermon and attained Nirvana. Lumbini, Bodhgaya, Sarnath and Kushinagar are the major pilgrimage places of the Buddhist Circuit followed by Buddha’s monsoon retreats of Vaishali, Rajgir and Sravasti in India, and his early home at Tilaurakot in Kapilavastu, Nepal. There are numerous other sites where the Buddha and the saints that followed traveled during his life after his transformation, which are held in deep veneration.

The places or stupas mentioned in this article include all those pilgrimage sites that are of significance to Buddhist tourists who are planning to spend their holiday in India:

One of the most massive structures in Sarnath, approximately 13 kilometers away from Varanasi, the Dhamekh Stupa is an exquisite example of Buddhist architecture with carved figures of flowers, humans and birds and inscriptions in Brahmi script. The original structure was commissioned by Emperor Ashoka in 249 BCE and was completed much later in 500 CE during the Gupta reign. The solid cylinder of bricks and stone structure with a diameter of 28 meters and looming at a height of 43.6 meters is believed to represent the spot of a deer park where Lord Buddha gave the first sermon to his five disciples after attaining enlightenment, “revealing his Eightfold Path leading to nirvana”.

The Ramabhar Stupa in Kushinagar holds a significant place in the history of Buddhism being the cremation site of Lord Buddha, who is believed to have attained enlightenment and Nirvana on a full moon night. The site was the place where Lord Buddha gave his last sermon to his disciples, “impermanence is inherent in all things. Work out your own salvation with diligence”. The Ramabhar Stupa is a dome shaped monument having brickworks and stands at a height of 49 feet. Surrounding the stupa there are ruins belonging from the pre-historic era, which holds special tourist attractions.

The 104 feet structure, Kesaria Stupa is one of the tallest and largest Buddhist Stupas in the world (taller than the Borobodur Stupa in Java and stupa at Ghorakatora in Nalanda district) that was excavated in 1998. According to the Archaeological Survey of India, the Kesaria Stupa is said to date back between 200 AD and 750 AD and may have been associated with the 4th century ruler, Raja Chakravarti. Further, it is claimed that the original height of the Kesaria Stupa was 150 feet but was reduced to its present status after an earthquake in Bihar in 1934. It is believed that Lord Buddha, during his stay in Kesaria, preached the Kesaputtiya Suttas which include the Kalama Sutta.

Kesaria, a small town in Bihar, was under the rule of the Mauryas and the Lichchhavis. There are also traces of the Kushan dynasty, and according to the Indian history the Chinese travellers Fa-Hien and Huen-Sang also visited the place.

Another marvelous high earthen mound covered with a brickwork edifice belonging from the Gupta period, the Chaukhandi Stupa was originally built as a terraced temple… signifying the meeting of Lord Buddha and his first disciples on their journey from Bodh Gaya to Sarnath. Later in the 16th century, an octagonal tower was built over the terrace structure to commemorate the visit of Humayun.

One of the UNESCO World Heritage sites, the Mahabodhi Stupa, which is also known as the Mahabodhi Vihara, illustrates a wider picture of Buddhism where it is said that Lord Buddha gained enlightenment some 2500 years ago. The origin of the Buddhist temple that is located in Bodh Gaya, Bihar, remains inconclusive although it is believed that Emperor Ashoka built a shrine dedicated to Lord Buddha here in the third century B.C. Further studies by scholars depicts that the temple was a two storied structure with a gabled roof built around the Bodhi Tree and supported by pillars. Later, during the reign of the Gupta empire a fifty metre tall pyramidal tower crowned with a bell like Stupa was erected on a fifteen meter square two storied structure dotted with four smaller towers identical to their central counterpart. Inside the temple sits a large gilded statue of Shakyamuni Buddha in earth touching mudra. The temple surrounds a two metre high stone wall that reflects the diorama from 150 BC to 700 AD. Close to the temple is the sacred Bodhi tree where Lord Buddha attained enlightenment.

Amaravati in Andhra Pradesh and the surrounding region between Krishna and Godavari rivers reflects a vast diorama of ancient Indian art and architecture. The region over the centuries has witnessed the invasion by several rulers from Satavahanas, Andhra Ikshvakus, Pallava, Eastern Chalukyas, Telugu Cholas, Kota kings, and Kakatiyas, traces of which can still be found in the form of distinct monuments.

The Sariraka type of stupa in Amaravati OR Mahachaitya is one of the important Buddhist sites where the Vajrayana teachings of Kalachakra is practiced, which was initiated by Dalai Lama in 2006. The Amaravati Stupa was one of the finest monuments that were built during the reign of Emperor Ashoka in 200 CE. The original structure is believed to have a diameter of 50 meters and height of 27 meters, a brick built circular vedika or drum, five pillars on the rectangular Ayaka platforms representing the five main events in Buddha’s life – the birth, the great renunciation, the enlightenment, the first sermon and the final plz use a more appropriate word AND harmika (umbrella like structure). After the decline of the Maurya Dynasty the stupa was also neglected and it was buried under rubble leaving behind the remains of the plinth. Today some of its relics – sculptures and inscriptions – are preserved in various museums including Chennai, Kolkata, London and Masulipatnam.

The Maha Stupa at the ruins of Thotlakonda Buddhist Complex is yet another remarkable archeological site that is said to date back to some 2000 years. During the reign of Kalinga, Thotlakonda, which is approximately 15 kilometers from Visakhapatnam, witnessed peak activity owing to brisk Roman trade and religious missions sent abroad. Excavated sites located nearby include the Hinayana Buddhist complex, Bavikonda and Pavurallakonda. The Maha Stupa at Thotlakonda is ancient brick work architecture and is surrounded by several other excavated structures like a university, monastries, a swamedha altar, royal baths, advanced drainage systems, viharas, chaityas.

15 Places to See during Autumn Season near Hyderabad

Close to Thotlakonda, the Bavikonda Buddhist Complex is another recent excavated site that hosts several relics belonging from the 3rd century BC. Encircling the monastery there are several other brick works, pillars carved with inscriptions, and stupas.

One of the major heritage sites in India that is located approximately 45 kilometers from Bhopal, Madhya Pradesh, the Sanchi Stupa is considered as the oldest stone structure in India. The construction work of this massive structure was commissioned by the emperor Ashoka the Great in the 3rd century BC and was supervised by Ashoka’s wife. The Sanchi Stupa was built as a simple hemispherical stone structure with a ‘chatra’ signifying to honor and shelter the relics of Buddha. Later, four ornamented gateways were added surrounding the stupa. The complex holds the famous sandstone pillar having Ashokan inscription and an inscription in the ornamental Sankha Lipi from the Gupta period. Further, several inscriptions and carved structures portray the Satavahana period and various studies conclude that the Sanchi Stupa was vandalized during the Sunga period and was rebuilt during the same era. The Sanchi Stupa today is surrounded by several other ancient monuments including other small stupas and temples belonging from the pre-historic era and unwrapping the chapters of the Gupta Empire. Some of the relics including ‘dhatu’ are distributed and preserved in several museums.

The excavated site of Deur Kothar in Madhya Pradesh houses remnants of several monuments made of stones and bricks and is considered a site of national importance. It is believed that the entire complex was erected by Emperor Ashoka and boasts four brick stupas foreshadowing the bygone era with several carven figures of human, animal and flower. The complex also holds monasteries, a water channel system, an ancient pathway, intricately carved pillars with Brahmi inscriptions and 30 stone stupas. According to studies by scholars the site was built before the construction of stupa at Sanchi.

Founded in 1985 by the Nichiren sect of Japanese Buddhism, the Shanti Stupa at an altitude of 4,267 meters in Changspa in Leh district is one of the prominent tourist places in ladakh region. A flight of 500 steps leads to the two level structure that comprises the central relief of Dharmacakra with deer on each side and reliefs depicting the journey of Lord Buddha since birth. Further, the Shanti Stupa being perched at a hill top offers a panoramic view of the city of Leh and surrounding mountains.

Situated in the land locked state of Sikkim in Gangtok, Dro-dul Chorten Stupa with a gold plated spire was built in 1945 and belongs to the Nyingma order of Tibetan Buddhism. The stupa preserves several religious objects including holy books and a complete set of Dorjee Phurba. Within the complex there are 108 prayer wheels encircled by Chorten Lhakhang and Guru Lhakhang that holds two colossal statues of Guru Rimpoche. It is not only a major pilgrimage site for the locals in Sikkim but also one of the famous tourist spot in gangtok and is also visited by international Buddhist pilgrims.

Belonging to the Nichiren sect of Japanese Buddhism and located in the heart of Darjeeling town, the Peace Pagoda is a symbol of world peace that unites people of all races and creeds. It was built in between 1972 and 1992 and reaches a height of 28.5 meters and a diameter of 23 meters. Close to the stupa is the two storied traditional Japanese style temple, which is worth a visit on your visit to Darjeeling.

Popular 25 Places to Explore in Darjeeling

Founded by the followers of His Holiness the Dalai Lama, the Salugara Monastery in Siliguri hosts a 100 foot stupa that comprises five types of relics belonging to Tibetan Buddhism.

“To Plan your customized Buddhist pilgrimage holidays in India contact Tour My India, which is one of the leading tour operators in India having an experience of more than 10 years in travel and tourism industry. Check out our best Pilgrimage holiday packages in India.