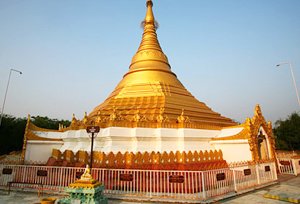 A good part of Gautam Buddha's life was spent in India as this was the place where he went through the journey from attaining Nirvana to Parinirvana (nirvana-after-death). During his life, he has been to many locations with his disciples to preach and teach the principles of moral thoughts and actions. Most of these places have now temples, stupas, gardens or monasteries. If this holiday, you want to spend some time in serenity to unwind your spirits then there are no better places than the Buddha temples sprinkled in India and Nepal. Considering all the good number Buddhist temples in India and Nepal, Tour My India has designed a package - Buddhist Pilgrimage with Goldern Triangle Tour. In just sixteen days, this tour will take you to not only the major Buddhist pilgrimages but also to the Golden Triangle sites- Agra, Jaipur, and Delhi. A visit to all these places will be inspirational and offers an insight into the life of Buddha.

Departure from Kathmandu marks the end of the tour. For detailed information about the tour, go through the detailed itineraries mentioned below.