It is India where Lord Buddha was born got enlightened. There are several places in India, considered to be spiritual and divine for Buddhism. If you are excited to enhance your knowledge about the vibrant culture and history of Buddhism, then this 9 days and 8 nights package will take you to the journey of inner peace and wisdom. You will visit the places like Sravasti, Kushinagar, Vaishali, Bodhgaya, Varanasi and Lumbini where Buddha was born and preached humanity. The package helps you explore all these magnificent Buddhist sites of India and feel the divine blessings. 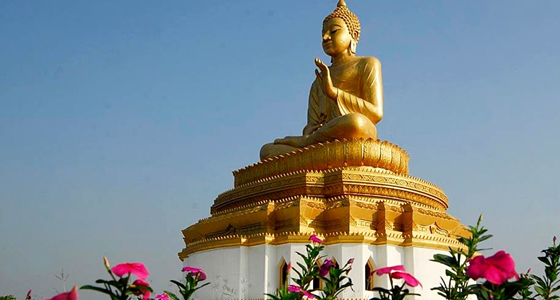 After breakfast transfer to the airport to board the flight for Lucknow. Upon arrival at Lucknow airport meet with our representative and drive to Sravasti, the capital of the ancient kingdom of Kosala, has the honour for sheltering Buddha for 24 rainy seasons in the Jetavana Gardens. It is sacred to Buddhists because it is here that Lord Buddha performed the Tirthika heretics.
Upon arrival check into the hotel. After fresh-n-up sightseeing tour around Sravasti visiting
Jetavana and Ananda Bodhi Tree. Dinner and overnight stay at hotel.

Day 03: Sravasti - Lumbini
Morning after an early breakfast we will leave for Lumbini- the birthplace of Lord Buddha. The birthplace of Lord Buddha where he known as Gautam in his childhood, Lumbini is situated in the southern Terai plains of Nepal. Lumbini is also a World Heritage Monument of UNESCO.
Upon arrival at Lumbini transfer to the hotel. After fresh-n-up city we will visit the Ashoka Pillar. It was built in the year 259BC, by King Ashoka of India. When he constructed this pillar, the King exempted the villagers from paying tax and gave out 100 golden coins to the people. In the 07th century, the pillar was struck by lightning and split into two parts. The site was lost for six centuries and covered with dense forest before being re-found in 1895.
In the evening have a walk through monasteries made by many nationals. Dinner and overnight stay hotel. 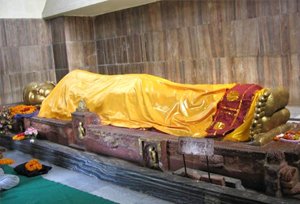 After breakfast we will visit Maya Devi Temple, dedicated to the mother of Lord Buddha, Maya Devi. The temple was built during the 02nd century. Later drive to Kushinagar crossing Indo - Nepal border. Upon reaching transfer to the hotel.
After fresh-n-up at the hotel we will set of for a visit to the monuments of Kushinagar visiting Nirvana Temple and Ramabhar Stupa. Dinner and overnight at hotel.

Day 05: Kushinagar - Vaishali - Rajgir
After a breakfast leave for Rajgir via Vaishali. Vaishali mentioned in the Ramayana and in the Buddhist literature, is reputed as the birthplace of Lord Mahavira and the capital of Lichchavis from early times. It was the scene of the Second Buddhist council held about a hundred years Lord Buddha's death. According to the historians, Vaishali is one of the first democratic republics of the world. A recent excavation has brought Vaishali in the limelight and the historical and archaeological importance of the area has resurfaced. In Vaishali we will be visiting Ashoka Pillar, Buddha stupa and Shanti stupa.
Later continue drive to Rajgir. En-route we will visit the ruins of Nalanda University. Founded in the 5th Century A.D., Nalanda is known as the ancient seat of learning. 2000 teachers and 10000 Students from all over the Buddhist world lived and studied at Nalanda, the first Residential International University of the World. A walk in the ruins of the university takes you to an era that saw India leading in imparting knowledge, to the world - the era when India was a coveted place for studies. The University flourished during the 5th and 12th century.
Upon arrival at Rajgir check into the hotel. Dinner and Overnight stay in Rajgir. 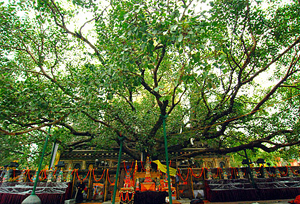 This morning we go for sightseeing around Rajgir. Lord Buddha spent many months of retreat during the rainy season here, and use to meditate and preach on Gridhakuta, the "Hill of the Vultures". Lord Mahavir spent 14 years of his life at Rajgir and nalanda. It was in Rajgir that Lord Buddha delivered some of his famous sermons and converted king Bimbisara of the Magadha Kingdom and countless others to his creed. Here we will visit the monastery of Venuvana Vihar built by King Bimbisara for Lord Buddha to reside. This was the King's first offering to Lord Buddha.
Later in the afternoon drive to Bodhgaya. Upon arrival check into the hotel. Dinner and overnight stay at Bodhgaya.

Day 07: Bodhgaya
Today we will have a full day excursion to Bodhgaya and Gaya. We will be visiting The Mahabodhi Temple, Bodhi Tree, Great Buddha Statue, Niranjana River, and Sujata Temple
And lots of other significant temples.
The Mahabodhi temple built on the east of the sacred tree stands majestically 17 feet high on a base 5 feet square, and consists of a soaring pyramidal tower surmounted by a stupa. The Vajrasana or Diamond Throne lying between the Bodhi Tree and the temple marks the actual spot where Buddha sat in meditation and attained supreme knowledge. A gilded Buddha smiles upon the visitors from a niche in the wall of the temple, and his footsteps carved in stone hold flower offerings from the devout. Unbelievable peace pervades the atmosphere giving credence to legend Besides the Mahabodhi temple; we would visit several Buddhist temples built by the followers of Buddhism from all over the world.
Dinner and overnight stay in Bodhgaya. 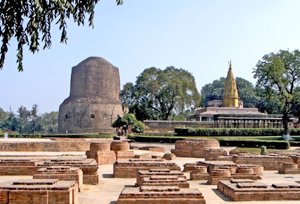 After an early breakfast we will leave for Varanasi. Before arriving to Varanasi, we will have a visit to Sarnath. It enjoys the extraordinary privilege of Lord Buddha delivering his first sermon after attaining enlightenment 2500 years ago. It is about 10 km from Varanasi and holds a number of Buddhist sites that include the famous Dhamekh Stupa, the seat of the holy 'Buddha'. You can also visit the ruins of Dharmarajika Stupa and Mulagandhakuti Temple, where Lord Buddha is said to have rested and meditated while in Sarnath. The Ashoka Pillar built by the emperor Ashoka is a must see in Sarnath.
Later proceed to Varanasi. Upon reaching check into the hotel. In the evening transfer to the river ghat to have the glimpse of evening aarti. Return to hotel for dinner and overnight stay.