India Gets Its First Private Train: Lucknow-Delhi Tejas Express, Know About its Interesting Features & How to Book 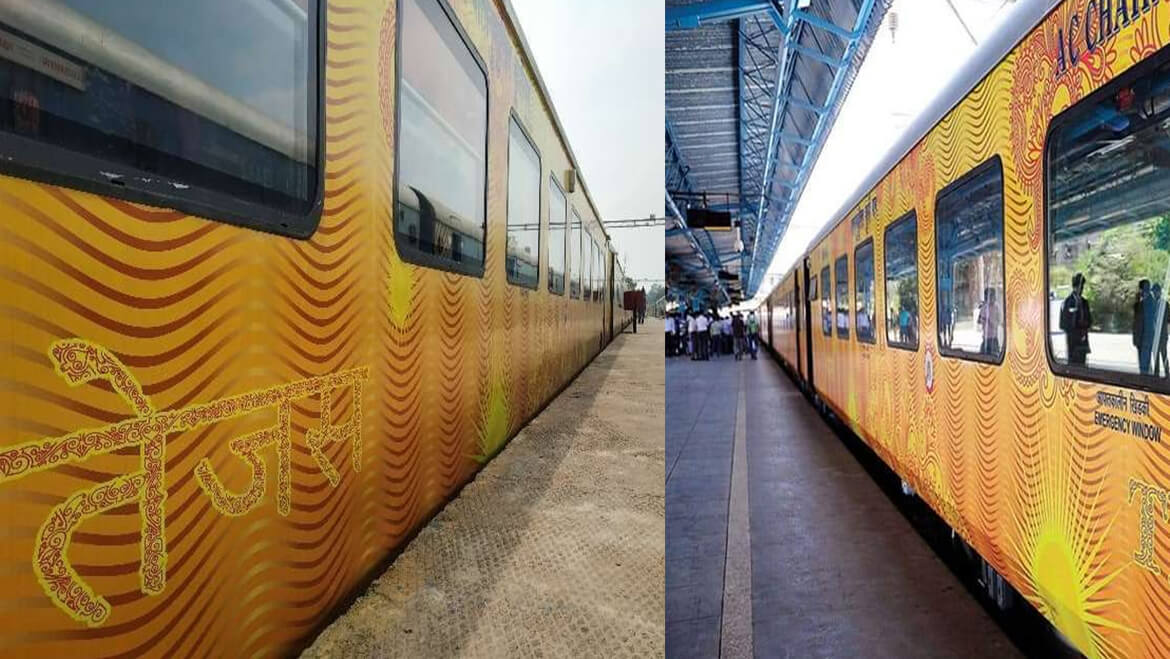 The idea of a privately operated train is something that Indians had entertained for a while now. Finally, that idea has been brought to life in the form of Tejas Express, which is India’s first private train. Indian Railway Catering and Tourism Corporation (IRCTC), which will operate the train, will pay annual lease charges for the rake of the train to the Railway Board along with haulage charges. This is the first time that IRCTC has complete control over the operation and tickets of the train. Tejas Express, which will run between Delhi and Lucknow, was flagged off by Yogi Adityanath- the Chief Minister of Uttar Pradesh. On its inaugural run on 5th October 2019, the train carried 389 passengers, including officials and media persons.

Lucknow to Delhi Tejas Express: Even faster than Shatabdi Express 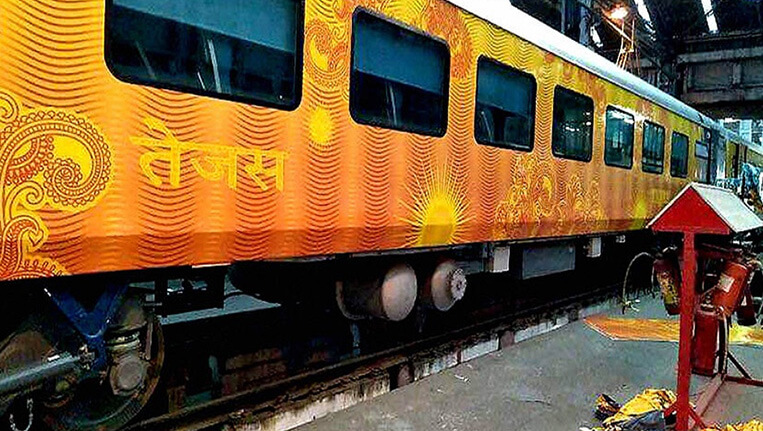 Tejas Express is the first corporatised train of the Indian Railways. Although there are several trains that run between Lucknow and Delhi, this is the fastest one on this route as it will cover the distance in just 6 hours and 15 minutes. Just to give you an idea of how fast it really is, consider this. Shatabdi Express, which is believed to be one of the fastest trains in India, covers the same distance in 6 hours and 35 minutes. The route followed by the train will consist of just two stops, one at Kanpur and the other at Ghaziabad. It consists of 12 coaches, out of which 10 are passenger compartments, and the other two are power cars. 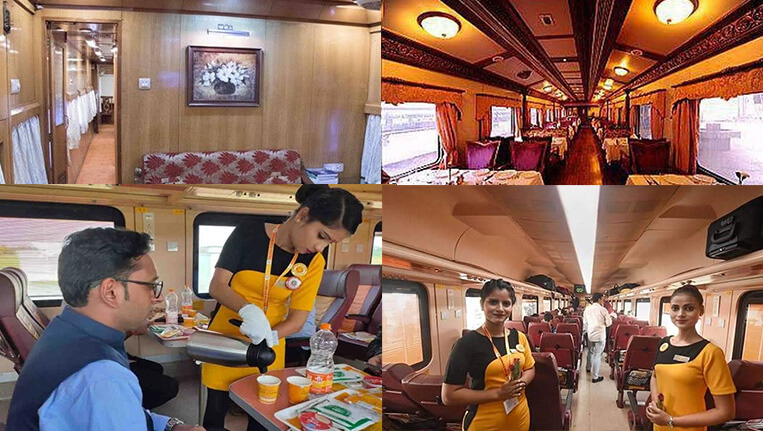 While the exteriors are impressive, it’s the interiors which will surprise the passengers, as it has the appearance and is equipped with facilities similar to an aeroplane. The interiors resemble a flight cabin with food carts, cabin crew in uniform, push-button feature in seats, and an infotainment service. Tea and coffee vending machines are also available onboard. Along with that, the convenience of the passengers has been accorded the highest priority.

Ramps will make alighting and boarding easy and convenient 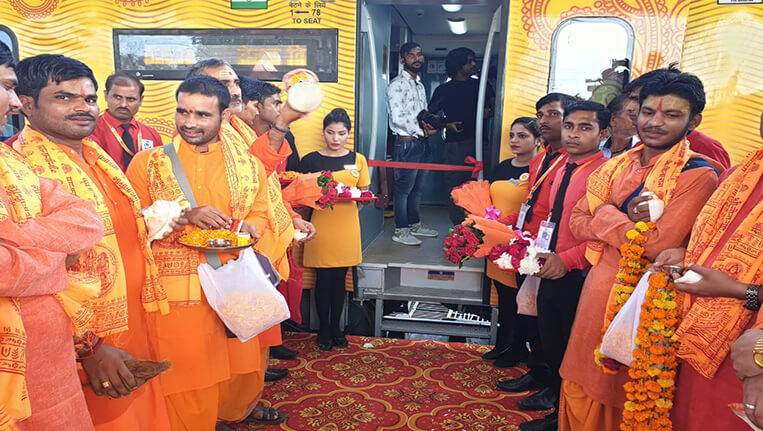 An example of this are the ramps, which will allow the passengers to board as well as alight comfortably from the train. A major issue faced by the passengers in India, especially the elderly, is the difficulty in boarding and deboarding the train, especially because the height between the platform and the floor of the train considerable high. Even then, some passengers are of the opinion that a ramp with stairs instead of a sloping surface would be much more convenient.

Other facilities which are available on Lucknow to Delhi Tejas Express are: 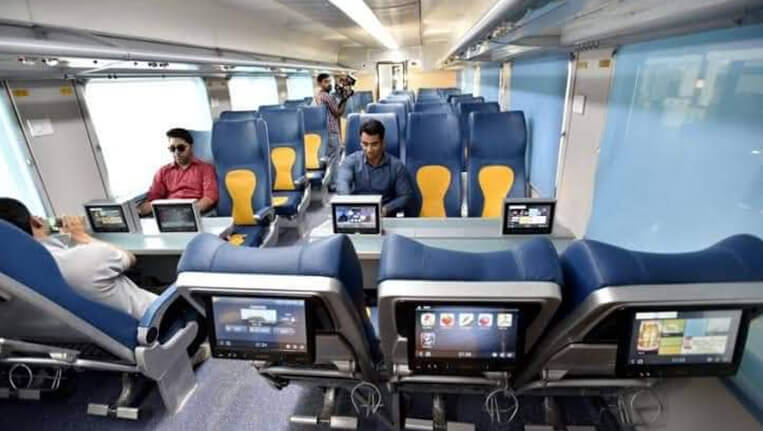 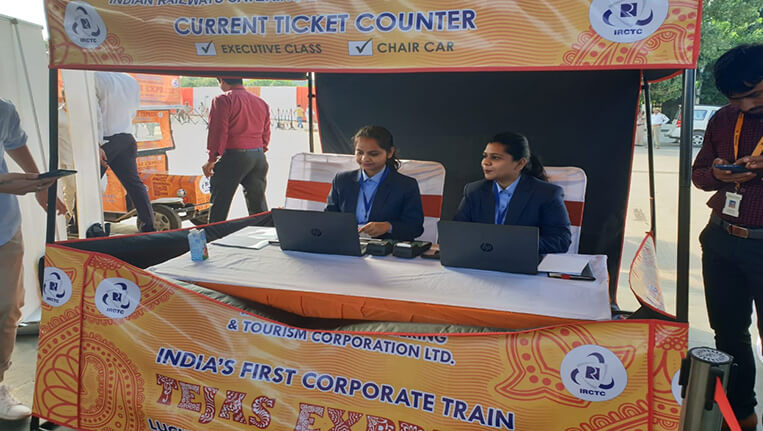 The fares on Tejas Express are based on dynamic pricing. While a ride on AC chair car costs 1,280 INR, a ride on the executive chair car costs 2,450 INR. However, because the prices of the tickets are determined according to dynamic pricing, the costliest ticket so far is 4,325 INR. It should be noted however, that the fares of the two trains are different from each other.

Lucknow to Delhi Tejas Express wins the hearts of passengers 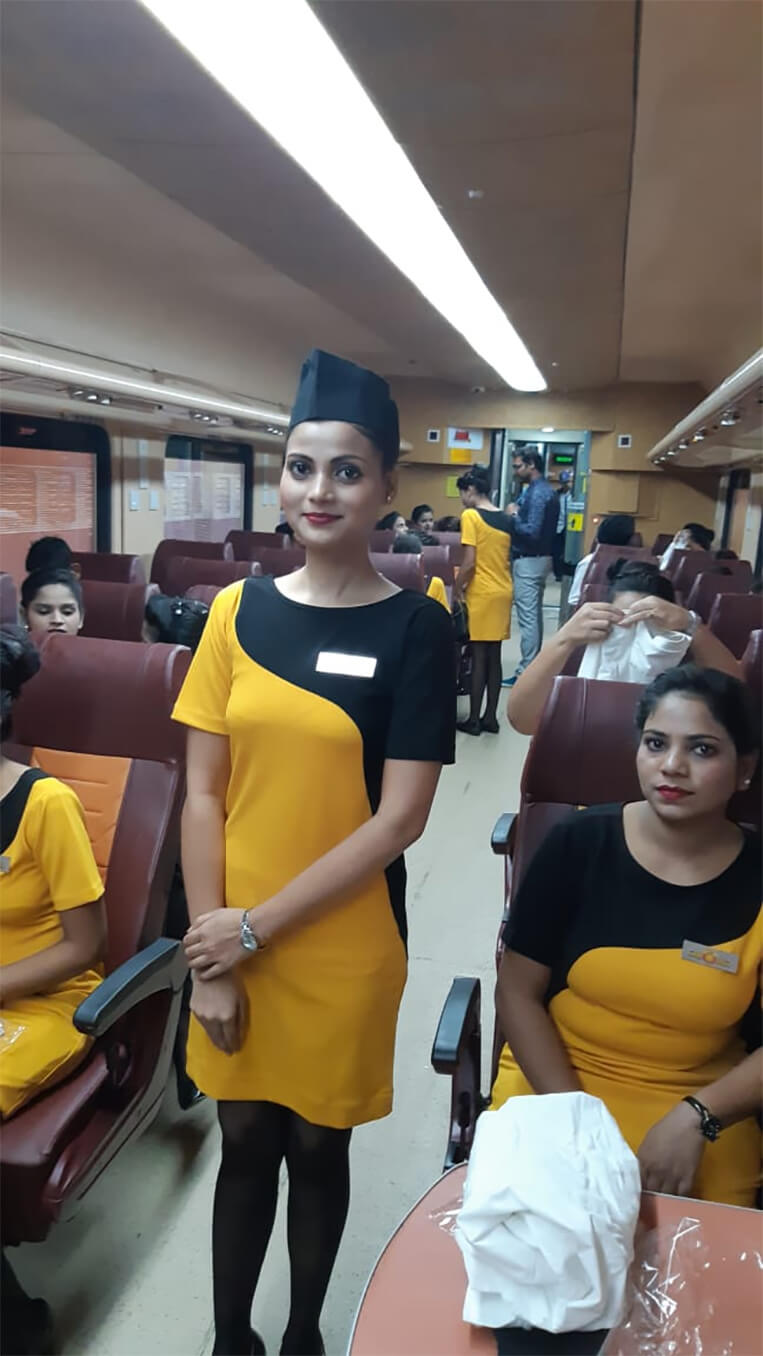 One Dr. RP Singh, now a retired joint director from the health department, had this to say, “It was quite a comfortable journey. The food is good and the seats have good upholstery and provide better legroom than other trains. The best part is its timings. One can come to Ghaziabad from Lucknow before afternoon and return at night after completing his/her work here.”

Another passenger, Vivek Sharma, who is an architect, boarded the train from Lucknow and was extremely impressed with its interiors, saying that it resembled the cabin of a plane. He said, “It takes almost the same time as a plane to reach Delhi from Lucknow if we include the check-in time as well. Many people who frequently between the two cities will prefer Tejas over other trains as well as planes.” His mother, who was also his co passenger, was all praises for the train and said that the excellent services available onboard Tejas should be made available in all the other trains. She said, “This feature (cabin attendants) should be made available in every train.”

Inaugural of Lucknow to Delhi Tejas Express: This is all that happened 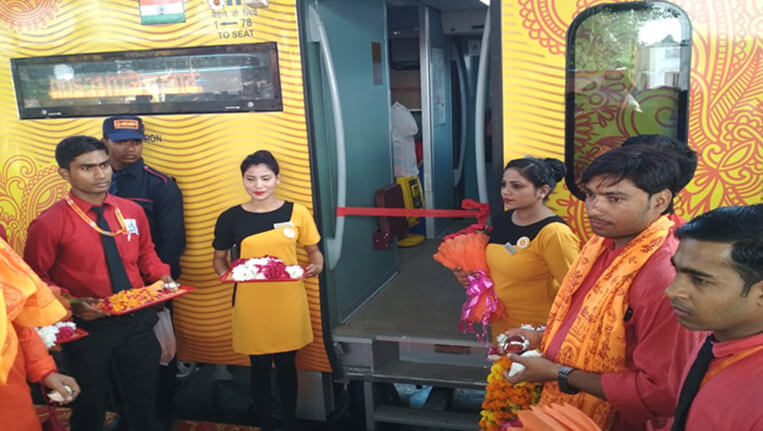 On the inaugural day of the Tejas Express, it was flagged off at 9:45M AM. It arrived in Ghaziabad at 3:20 PM and Delhi. Enthusiasm among the people on this occasion was extremely high and they lost no time in clicking as many photographs of the train as they could. While the police band played different tunes, priests blew conch shells and passengers hurried to make their way to the seats.

The CM interacted with the passengers for a while, and then followed it by delivering a speech which also congratulated the passengers on their maiden journey onboard the Tejas. The crew welcomed passengers with roses and a “tilak” (a mark worn on the forehead by the Hindus) on the forehead. This is what the CM Yogi Adityanath, had to say, “It is the first corporate train of the country. I congratulate the first batch of passengers travelling in it and hope such initiatives are taken to connect other cities as well. I thank Prime Minister Narendra Modi and Railway Minister Piyush Goel for giving the first corporate train from the biggest state to Delhi. This is a competitive era and and there is need for environment friendly public transport to be accepted in society.” 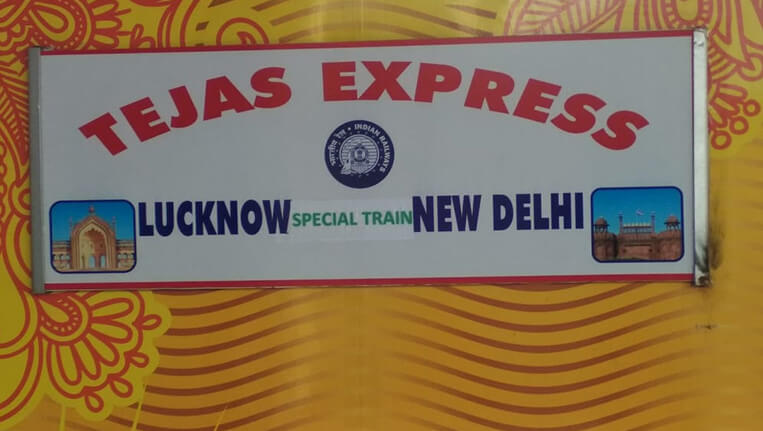 Here are the timings and schedules of the two Tejas Express trains. 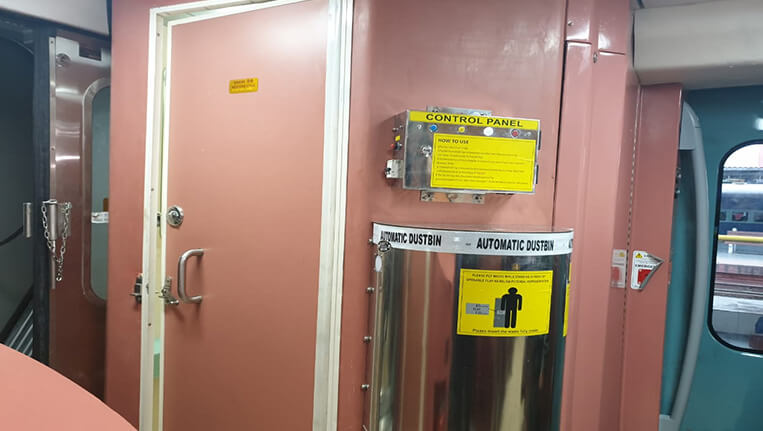 Passengers will not be able to book tickets on Tejas Express through tatkal or premium tatkal quota. The train will commence its commercial operations from 5th October. Bookings can be made from the IRCTC website. 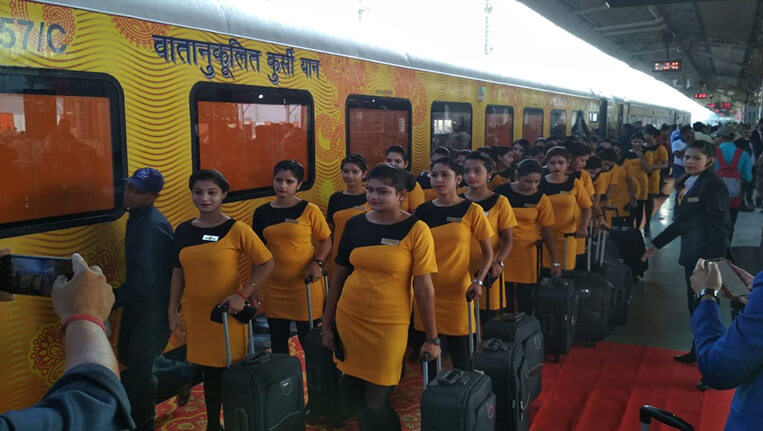 Passengers will be served a variety of delicious snacks and scrumptious food during the course of their journey. Here is a list of the kind of food & snacks which you can help yourself onboard the Tejas Express.

Refreshments served at the time of exit 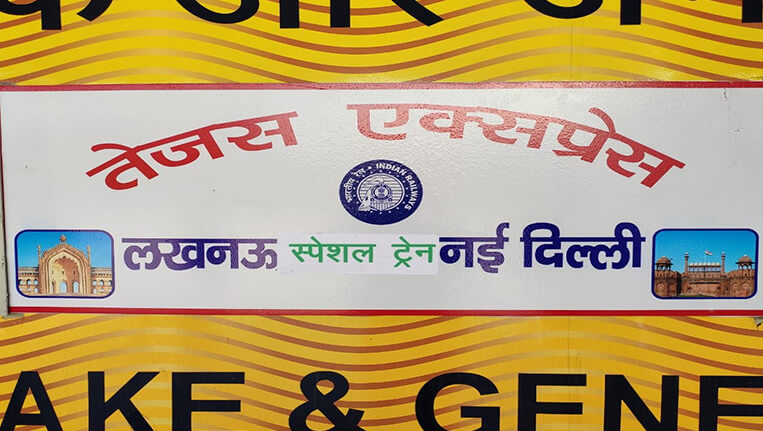 Tejas Express makes travelling from Lucknow to Delhi, or vice versa, faster, comfortable, convenient and exciting. Why book a plane ticket when you have the Tejas Express which ensures that you reach your destination not just fast, but in style!