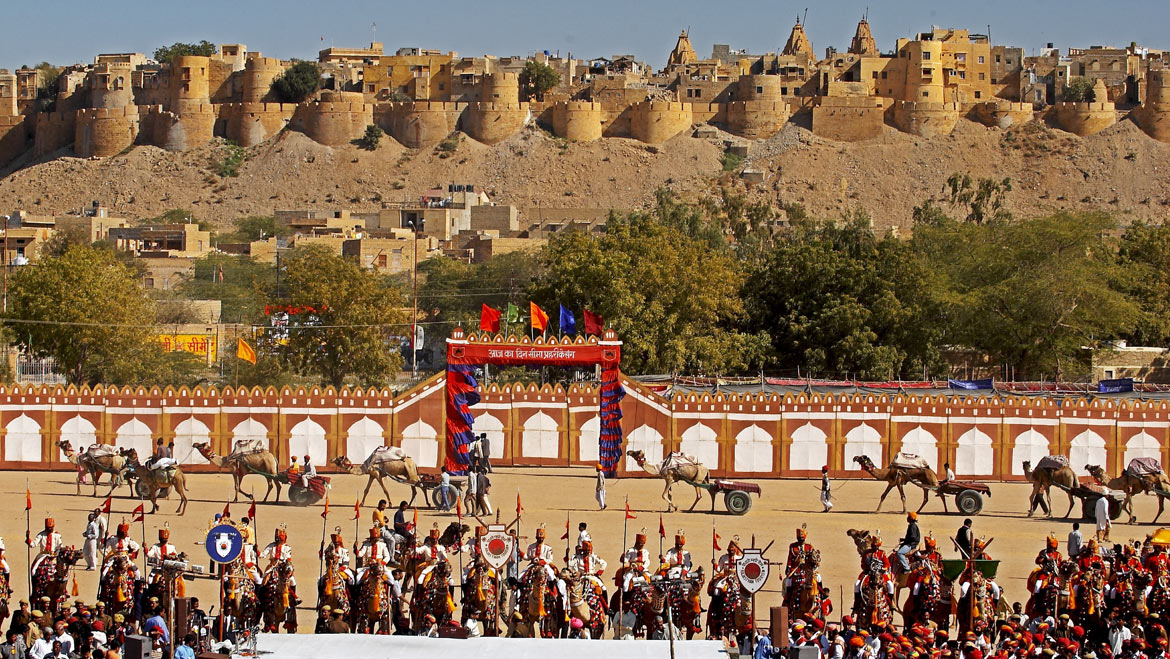 India is a land of colourful and vibrant festivals. With so many diverse cultures, traditions and religions, each day in India, a festival gets celebrated in some part of the country with great pomp and show. The liveliness and beauty of these festivals reflect the true spirits of Indian society and culture. Getting a glimpse of these festivals and fairs is not only an experience in itself but, also a memory to be cherished throughout your lives.

Listed below are ten of the most enthralling festivals of India that are a ‘Must-See’ for both Indians and international travellers planning their trips to India: 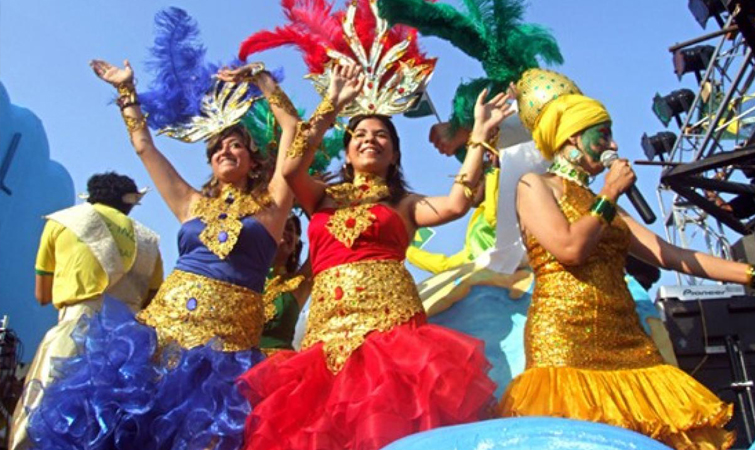 One of the most eagerly awaited festivals in Goa, the ‘Goa Carnival’ attracts thousands of tourists, both local and international. The streets of Goa come to life with singers, dancers and musicians in every nook and corner. Main highlight of the ‘Goa Carnival’ is its parade in which hundreds of locals take part and are accompanied with drummers, musicians, dancers, acrobats, clowns and fire-eaters. Carnival also features short skits and plays depicting the ancient culture of Goa. Feasting and merry-making is the only motto of the carnival. So, come and be part of the limitless fun, frolic and excitement. 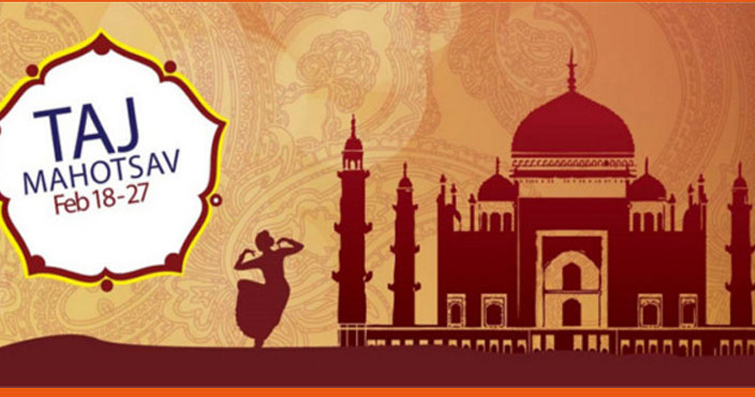 Annually organized by the Uttar Pradesh Tourism in the month of February in the city of ‘Taj’, the ‘Taj Mahotsav’ is one of the most extravagant fairs in India that celebrates the glory of Taj Mahal and the historic city of Agra. This 10-day long gala event draws craftsmen, artisans, dancers, and performers from all over the country to showcase their talent. Colourful folk dances, cultural performances, and live ghazals with a backdrop of the illuminated Taj, adds a magical charm to the whole aura.

Another major highlight of the ‘Taj Mahotsav’ is its food festival wherein you can indulge into an extraordinary culinary experience. Chefs from different parts of the country present their best dishes in this festival. Traditional and authentic Mughlai cuisine from inner parts of Uttar Pradesh are something to look forward to in the festival. 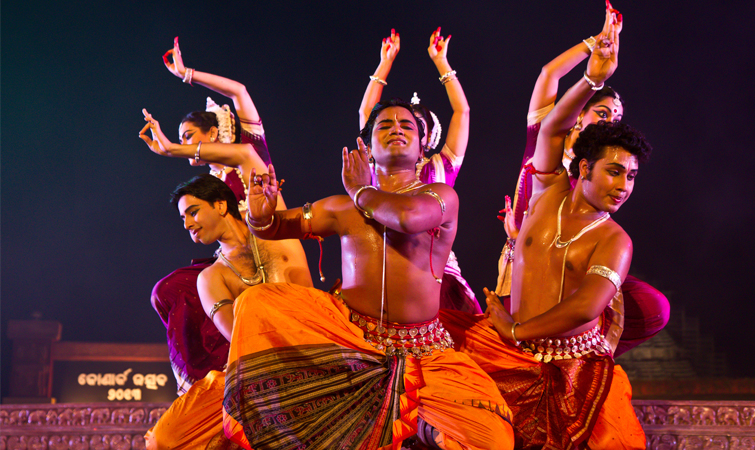 The scintillating ‘Konark Festival’ is held in the month of February every year in Odisha with the World Heritage Site, Konark Temple, serving as its backdrop. Promoting different classical and traditional art forms of India, ranging from Bharatnatyam, Odissi, Kathakali to Manipuri and Kuchipudi, the festival is a great attraction for art and music lovers around the world. Besides the dance festivities, tourists can also attend the exhibition of Odissi temple wall sculptures to get an insight into the craftsmanship of artisans belonging to bygone eras. Another highlight of the festival is its crafts fair where hundreds of local artisans and craftsmen come together to showcase their talent. 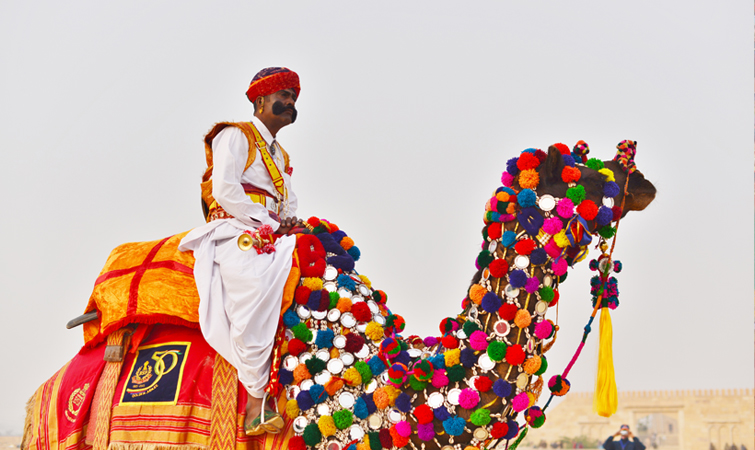 The 3 day long ‘Jaisalmer Desert Festival’ is held every year in the month of February on the land of golden sand, Jaisalmer in Rajasthan. A true spectacle of Rajasthani culture and traditions with bright colourful costumes, Gair and Fire dances, acrobat performances, camel races and live folk dance performances, this fair is a must visit for both national and international tourists. Some of the other interesting events like ‘Mr. Desert’ competition, turban-tying contest and ‘longest moustache’ competition are truly a treat to eyes.

The desert festival comes to life during night when bonfires lit up and live folk music performers fill the air with their soothing music – a backdrop of illuminated Jaisalmer Fort just adds to the charm of the whole atmosphere. 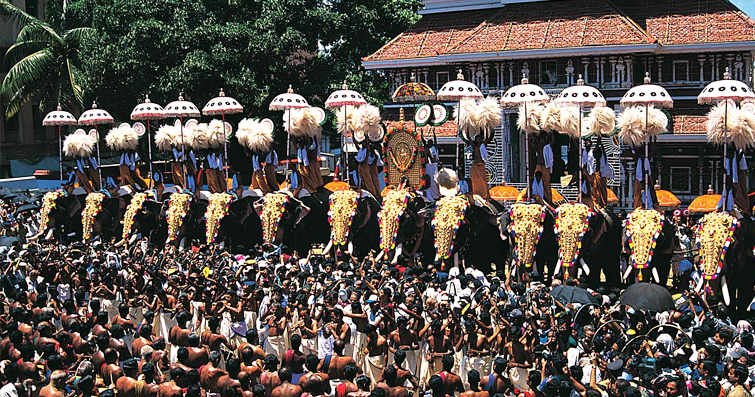 Date: Throughout the year
Venue: Kerala

Kerala is known for its exotic and elaborate temple festivals owing to abundance of temples in the state. The festivals start in February and run through April. Each festival marks a tribute to the God residing in the temple. Needless to say, all the temple festivals in Kerala are grand affairs with large processions of decorated elephants, drummers, energizing music, fireworks and people dressed in traditional attires. Besides huge processions, several events such as elephant and boat races, cultural programmes and musical concerts are organized to keep the crowds entertained. The extravagance and ecstasy of these temple festivals is something not to be missed during your trip to Kerala. 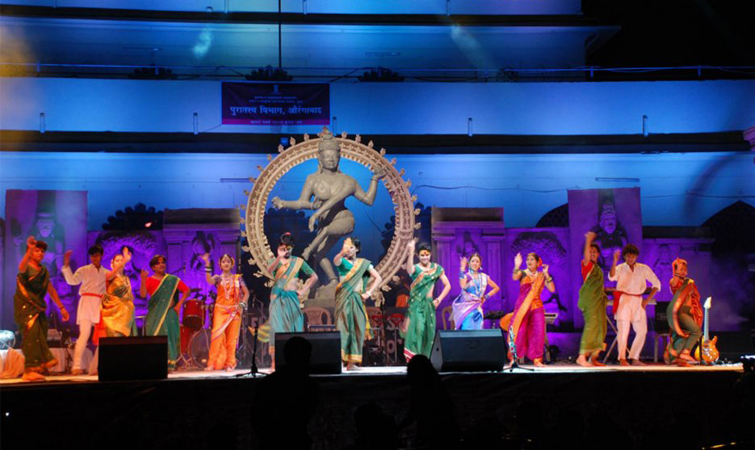 A festival of dance and music held in March every year near the world famous Ellora Caves in Maharashtra, the Ellora festival brings together, renowned musicians and dancers from all across India. Highlighting the rich cultural heritage of India, it is one of the most vibrant fairs of Maharashtra. Live instrumental & vocal musical performances, and classical dance performances are the major highlight of this festival. Besides dance and music, the festival is a great platform to get an insight into the craft work of craftsmen and artisans in Maharashtra.

Being a part of this extravaganza with the backdrop of 1400 year old caves will definitely be an experience to cherish forever.

P.S.: The Organizing Authority has called off this event. 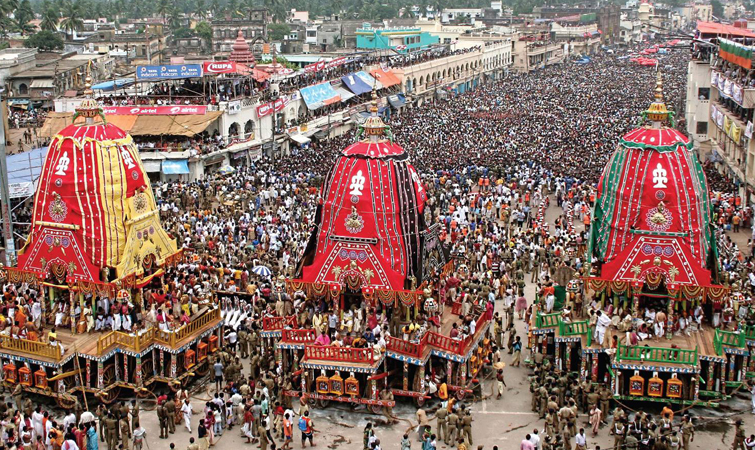 ‘Rath Yatra’ in Puri, Odisha, is one of the most awaited festivals of India. The festival marks its beginning with grand procession of colourfully decked up chariots of Lord Jagannnath along with his brother, Lord Balabhadra and sister, Goddess Subhadra, carried to Shri Gundicha Temple, where the deities stay for 9 days. On the 9th day, known as the ‘Bahuda Jatra’, the deities are brought back to the temple of Jagannath Puri, with the same pomp and show. The city of Puri gets transformed into a myriad of colours during these two days of processions when more than a million pilgrims gather from all across the world. Exceptional fanfare and grandeur of the festival makes it one of the most ‘Must-See’ festivals in India. 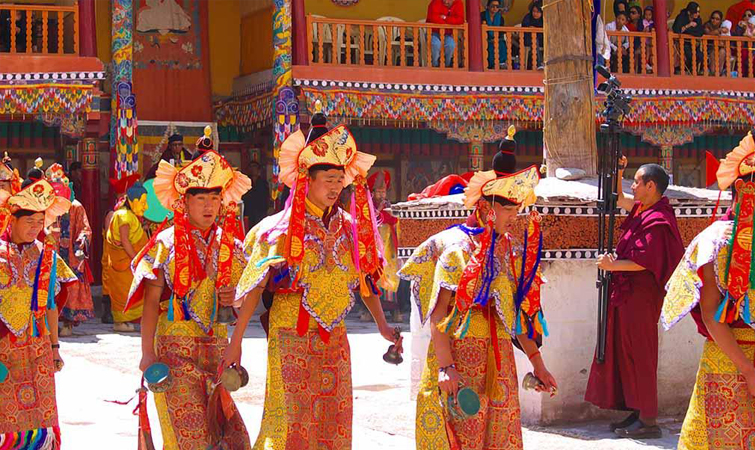 The ‘Hemis Gompa Festival’ is one of the oldest carnivals held in Ladakh. The festival holds a great religious significance for Buddhists as it marks the birth anniversary of Buddhist Guru, Padmasambhava. The Hemis Gompa, largest and oldest monastery in Ladakh serves as the venue for the festival. Local people dressed in traditional colourful and vibrant attires, attend the festival with great enthusiasm. Masked dance performances by the Lamas accompanied with traditional music played using long horns, trumpets and drums is the primary attraction of the festival.

If you want to attend a festival that is something different from the league of dance and temple festivals of North India, then the ‘Hemis Gompa Festival’ is just for you. 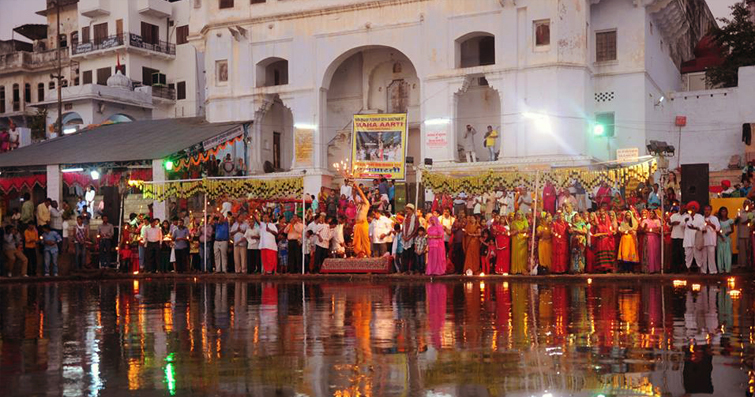 Celebrated in the month of November every year in the holy city of Pushkar in Rajasthan, the ‘Pushkar Fair’ is India’s most fascinating festivals that draws thousands of tourists from all over the world. Considered to be one of the largest cattle fairs in the world, you will find hundreds of Rajasthani farmers and traders gather at the ‘Pushkar Fair’ to sell and buy camels and other livestock. Camel races, folk dances, acrobat performances, magic and puppet shows and what not; the ‘Pushkar Fair’ is a perfect platform to witness old Indian cultures and traditions. With ladies decked up in colourful ghagras, children queuing up for giant wheel rides, little girls enjoying street side snacks and ice-creams, this is the only fair in India where you are bound to get the feel of a true ‘Indian Mela’.

Apart from the festivities, sand dune camel safaris and stays in traditional camps during the festival, is a lifetime opportunity for all tourists to soak themselves in true spirits of the vibrant state of Rajasthan. 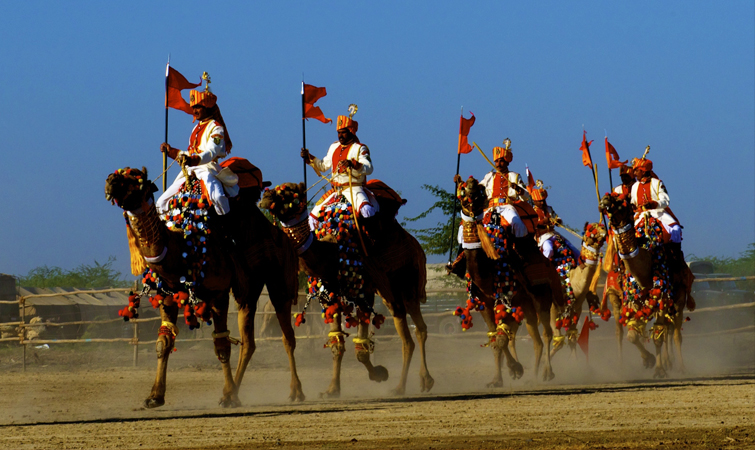 The vast and endless stretch of white desert in Kutch comes to life during the three months long festival that begins sometime in November-December and continues till February. During the festival, the white canvas of Kutch gets painted in vibrant colours of Gujarati culture and traditions. Live musical concerts, traditional and folk dance performances, camel safaris and an elaborate buffet of Kutch cuisine; the list does not end here. From spotting migratory birds and staying in lavish tents with bonfires lit under the moonlit sky to watching artisans paint the fabric with traditional ’Bandhni’ and ‘Batik’ techniques; the opulence and magnificence of the festivities of the ‘Rann Utsav’ is sure to leave its mark on every visitor’s mind.

The list of festivals in India is endless. These festivals are not only a way of celebrations but are actually a string that has kept different traditions and cultures together in a necklace called ‘INDIA’. Be it Diwali, Eid, Guruparv or Christmas, each festival is celebrated with same enthusiasm and grandeur.

Your valuable suggestions and comments are most welcome. Please let us know if you feel there is a discrepancy in the blog.

From the mesmerizing land of Garhwal, Pawan Kotiyal is a well-travelled writer. With a strong belief in living each moment in adventure; Pawan likes to set out on difficult treks and rafting expeditions. He has keen interest in nature photography and writing informative blogs on travel and wildlife conservation.