Must Visit Popular Ramakrishna Mission Ashrams and Temples in India 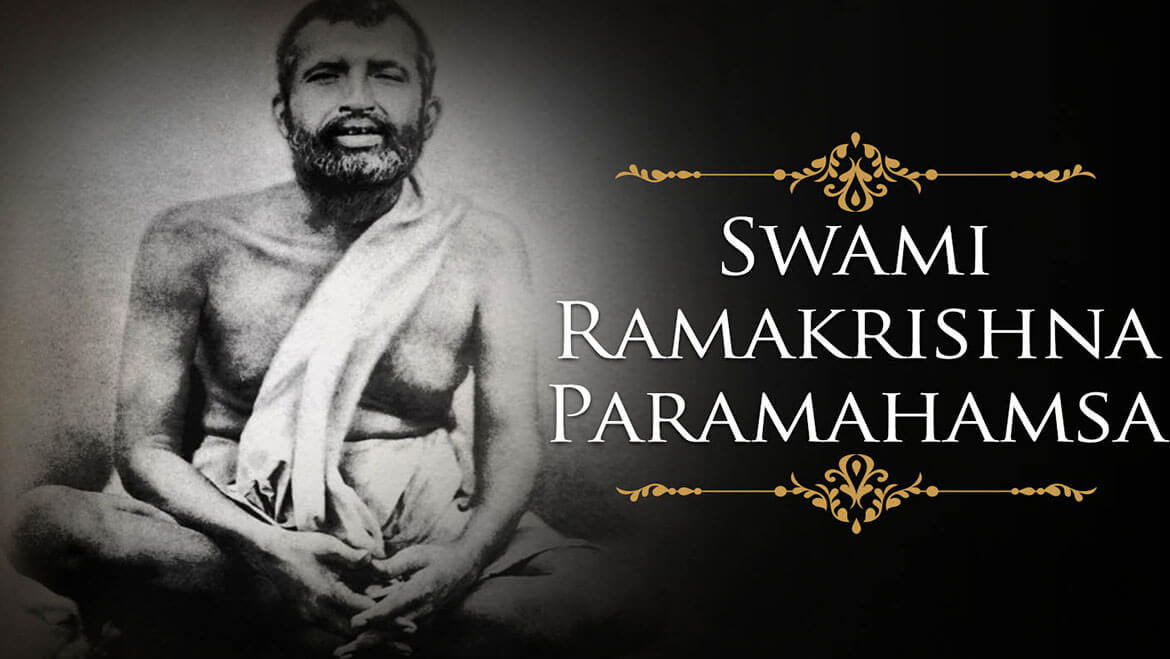 Ramakrishna mission is a famous and much revered Hindu religious and spiritual organisation, which is at the core of the worldwide Ramakrishna Movement or Vedanta Movement. Named after and inspired by Indian Saint Ramakrishna Paramahamsa, the Ramakrishna Mission was started by Swami Vivekananda on May 1 1897. Swami Vivekananda was the chief disciple of Saint Ramakrishna Paramahamsa. The mission’s main objective is to propagate Hinduism and Hindu philosophy of Vedanta-Advaita Vedanta and four yogic ideals- bhakti, jnana, Raja yoga and Karma. Here’s more on Ramakrishna Mission and its top temples out of 157 ashrams/shrines in India arranged in no particular order in the blog.

History of the Ramakrishna Math and Mission

Ramakrishna Paramahamsa was a 19th-century saint, who is attributed as the inspirator of the Ramakrishna order of monks and spiritual founder of the mission. Ramakrishna was a temple priest at the Dakshineswar Temple and had attracted a lot of monastic and householder disciples. Amongst all, Narendranath Dutta was his one of the chief disciples, who later went onto be known as Vivekananda. Before Ramakrishna’s death, he trusted Vivekananda to take care of young disciples. After his death, his disciples formed the first Math(monastery) in Baranagar. On May 1, 1897, Vivekananda founded the Ramakrishna Mission.

Goals and Objectives of Ramakrishna Math and Mission 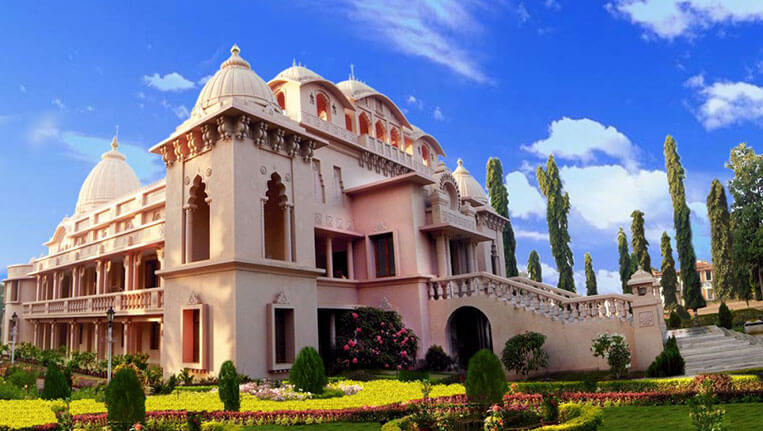 The goal and objective of the mission are purely spiritual, distancing itself from politics. Vivekananda announced Renunciation and Service as the twofold national ideals for the modern nation and he urged everyone to practice and preach these two ideals. Another belief of the mission is that service to poor is service to god. The main source of inspiration for the mission is Upanishads and Yoga in Bhagavad Gita, reinterpreted by Ramakrishna’s Life and Teachings.

Ramakrishna Ashrams and Temples in India: 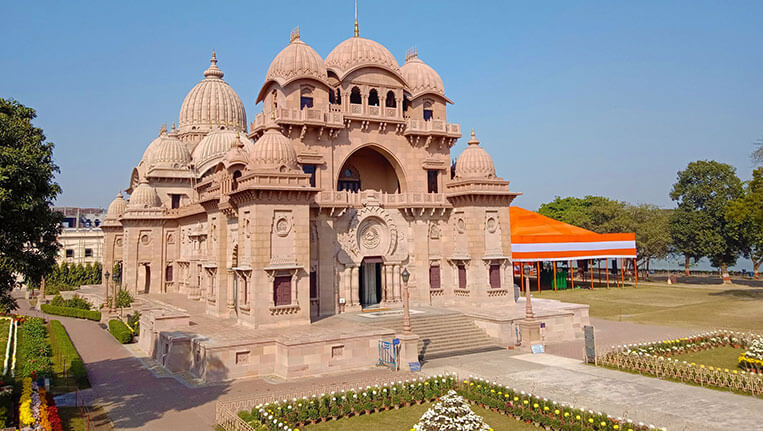 The headquarter of the Ramakrishna Math and Mission, located on the banks of Hooghly River in West Bengal, the Belur Math is one of the biggest religious and spiritual centres in India. Notable for its architectural design and aesthetic beauty, the Math complex also houses numerous temples dedicated to monks of Ramakrishna Mission. The epicentre of the entire Ramakrishna Philosophy and social works, the place holds an important religious and spiritual spot.

Holy Mother Temple – Temple constructed at the site where the mortal remains of Sarada Devi (wife of Sri Ramakrishna) were consigned to flames is one of the biggest spiritual attractions in the Math. 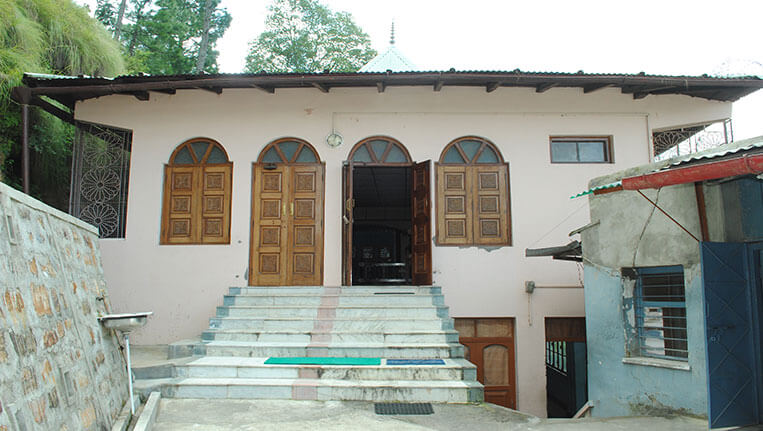 Nestled in the picturesque town of Almora, the Ramakrishna Kutir was founded by Swami Shivananda and Turiyananda in the year 1916. Both being the disciple of Sri Ramakrishna, propagated the harmonious way of living. Mainly a spiritual retreat for the monks, Kutir also welcomes tourists and devotees who are interested in missions. The Kutir also had a vast library and regular worships and fortnightly Ramnam Sankirtan are organised in the Kutir. The mission also runs various welfare programmes, including educating kids and distributing blankets to poor and needy. 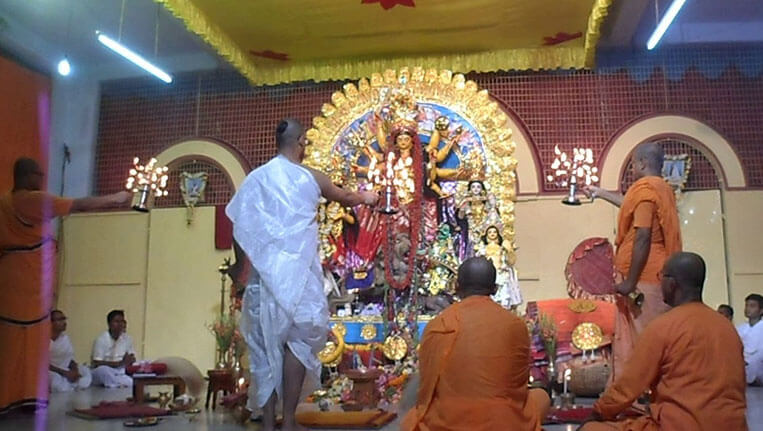 Situated at the birthplace of Swami Sivananda, a disciple of Sri Ramakrishna, Ramakrishna Math in Barasat was started in 1961. Shivananda is one of the core figures of Ramakrishna mission and the Math pays homage to his contributions. A major contributor to social welfare schemes in Barasat, the Math has been providing education and healthcare to the local population. Durga Puja and birthdays of core members of the Ramakrishna mission are celebrated with great joy at the Math in Kolkata. 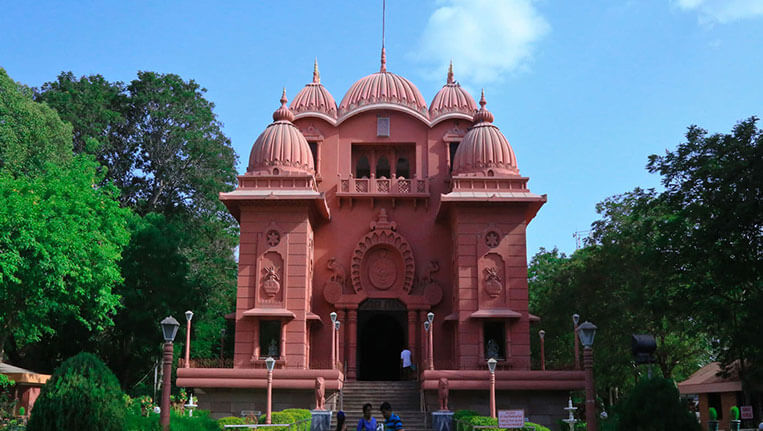 Established in 1927, the Ramakrishna Ashrama in Rajkot serves as a major social welfare organisation in the region which also provides basic ayurvedic and homoeopathic healthcare facilities to the local population. A cultural unit, Vivekananda Institute of Value Education and Culture also organises numerous retreats, seminars, career guidance and value education programmes. Also, regular worship and fortnightly Ramnam Sankirtan are an essential part of the Ashram in Rajkot. An ideal spiritual place, Ramakrishna Ashram in Rajkot is one of the biggest and most popular Ramakrishna Ashrams in India, in terms of social contribution. 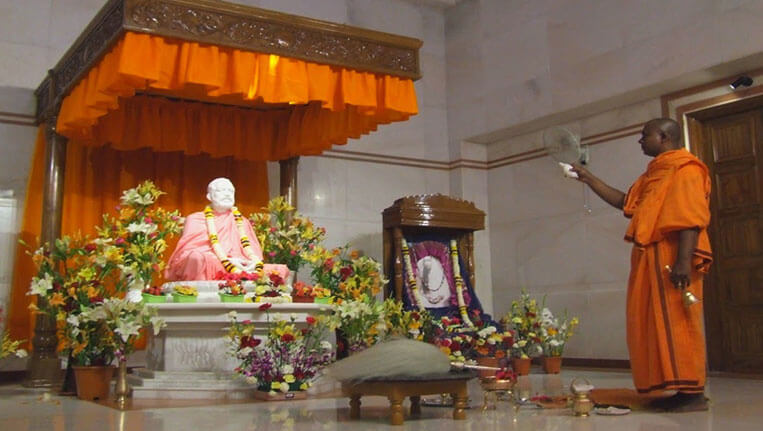 One of the most famous tourist attractions, Jaipur also features one of the most popular Ramakrishna Math. Started in 1978, the mission since then has been an active contributor in social welfare schemes. Providing homoeopathic and allopathic healthcare facilities to more than 30,000 individuals last year, the Math has shown just how much they believe in their preachings. Math also organises daily puja and bhajans and weekly religious discourses. Kali Puja is one of the many reasons to visit Ramakrishna Math in Jaipur. 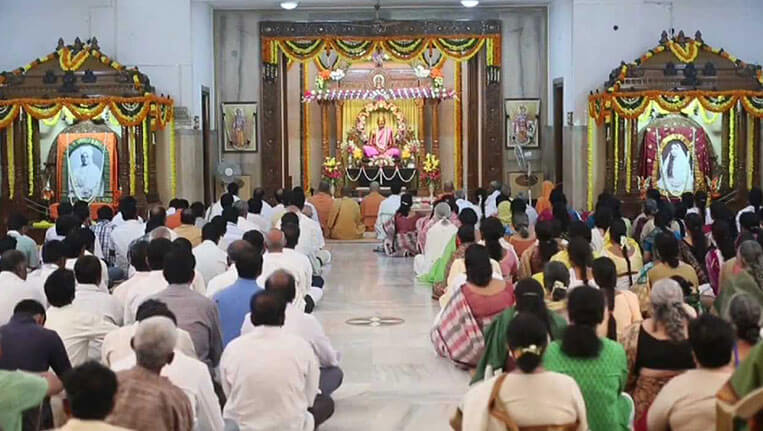 Promoting a Vedanta Society, Ramakrishna Math in Hyderabad is one of the largest Ramakrishna Maths in India. The math features audio-visual galleries showcasing Vedantic teachings, pictorial museums, school of languages and many more institutions. It also organises various weekly religious seminars and cultural retreats. Daily prayers and bhajans are also a major attraction here. The mission has also been an active participant in the welfare schemes for the local population. 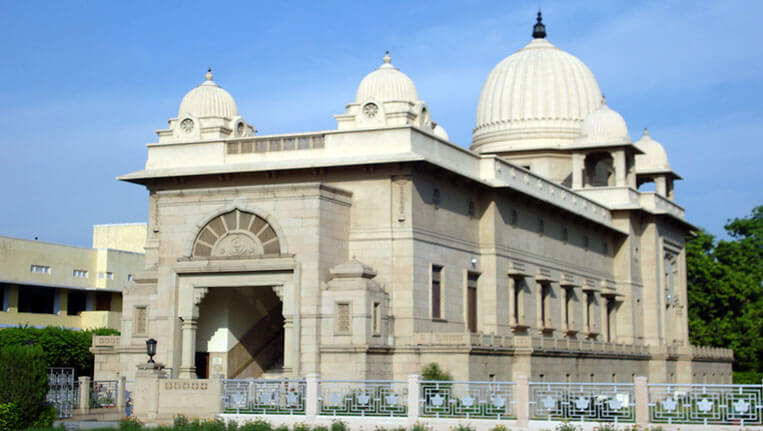 Most Popular Temples in India 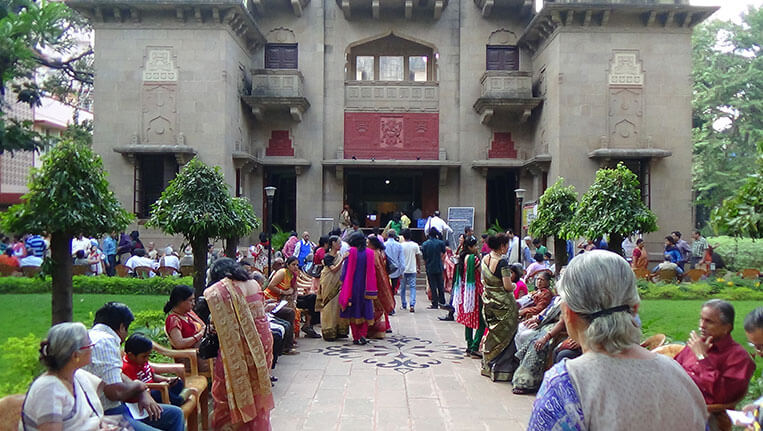 The Math was started in 1923 and since then it has played a vital role in propagating the Vedantic teaching in the state of Maharashtra. Contributing to the social welfare of the locals, the Math provides educational and healthcare facilities to hundreds of underprivileged locals. The Mission also organises daily prayers and religious discussions. 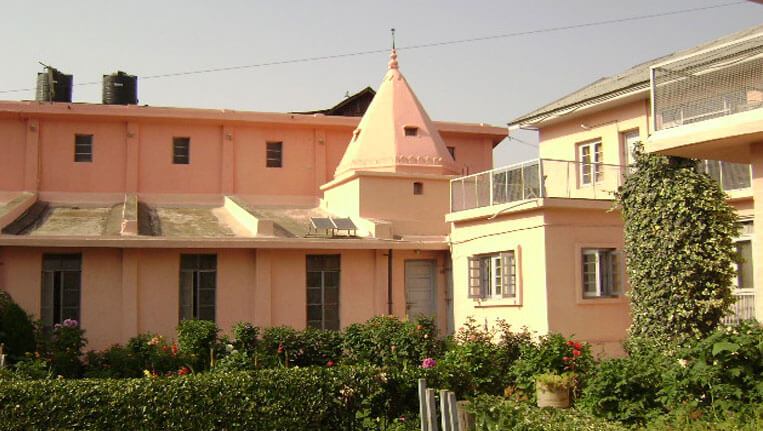 Situated in the picturesque North Indian state of Jammu & Kashmir, Ramakrishna Mission in Srinagar is a testament of the Pan-Indian reach of Ramakrishna’s philosophy. Started in 1957 in one of the top travel destinations, the Mission in Kashmir has been a proactive social contributor in the valley. Providing basic education and healthcare to hundreds of locals, as well as organising seminars regarding Vedantic philosophy, the mission has proved to be an integral part of social welfare schemes in the city. One more reason to visit, the serenity of the Mission is well complemented by the scenic landscape of Kashmir. 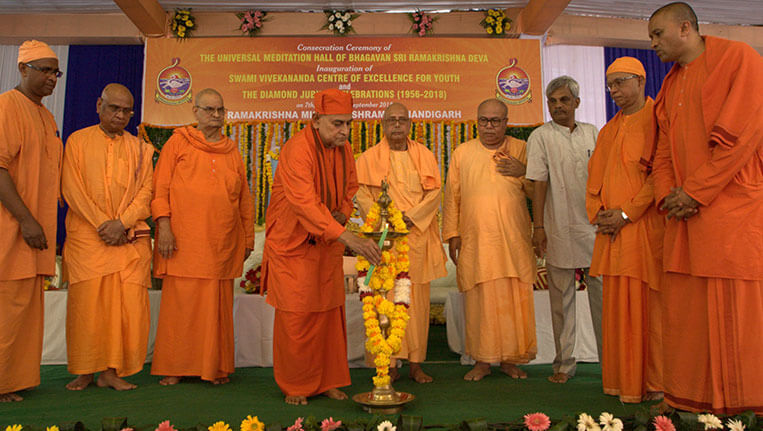 Located in the serene city of Chandigarh, promoting the concept of Vedic Society, Ramakrishna Mission Ashrama is one of the most popular Ashrams across the country. Started in a rented house in 1956, the Ashrama shifted to its current location in the year 1958. Contributing to the social upliftment of the underprivileged in the city, Ashram also provides basic healthcare and education facilities to poor and those in need. The Ashrama also organises spiritual discourses, weekly cultural and religious programmes and birthday of various religious deities are also celebrated with great furore. 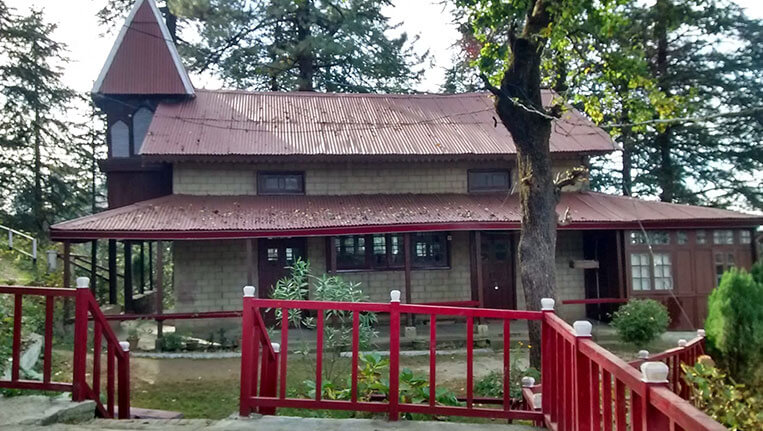 Spreading its reach in the tourist city of Shimla, Ramakrishna Mission Ashrama in Shimla was started in the year 2014, in the two buildings which previously housed Himachal Brahmo Samaj. The Ashrama has been an active social contributor in the city. Organising daily prayers, fortnightly Ramnam sankirtan and weekly religious classes, the Ashrama adheres to all the principles of Vedantic society. 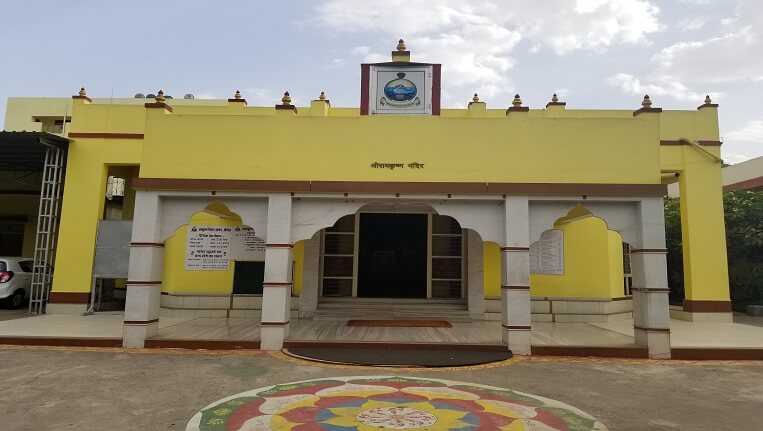 Founded as an Ashrama in the year 1968 and added as a branch of Ramakrishna Mission in 2006, the Ashram in Bhopal provides assistance to tribal and socially backward areas around it. The Mission has been an active contributor to social welfare schemes in the state. The Ashrama also organises weekly religious discussions, daily prayers and fortnightly Ramnam Sankirtan. 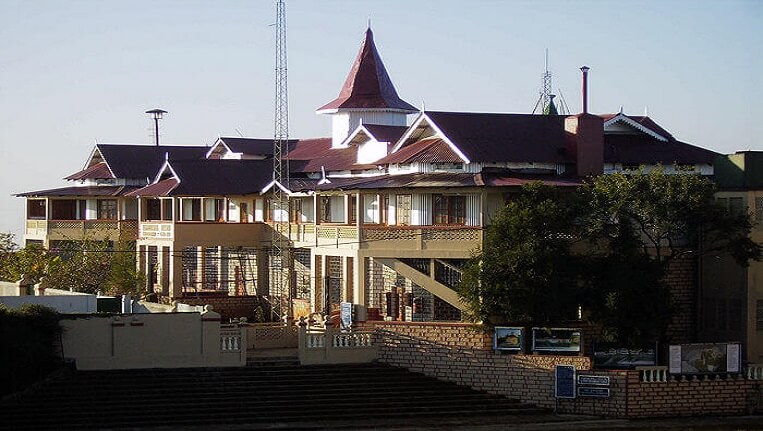 Nestled in the Northeastern state of Meghalaya, Ramakrishna Mission Ashrama, Sohra (Cherrapunjee) is the proof of collective social approach of the Mission, which believes in social unity irrespective of caste, religion or geography. Promoting the message of Vedantic philosophy and spiritual living in the scenic state of Meghalaya, the Mission has also been an active contributor to social welfare schemes in the region. A celebration of numerous Ramakrishna Mission monks is celebrated with great excitement. 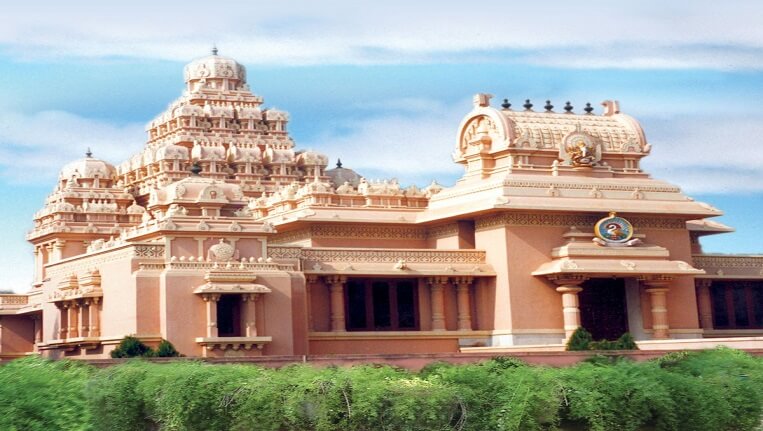 One of the best Ramakrishna Mission Ashrams in India and a must-visit place in Visakhapatnam, the Ashrama is the testament of the outreach and popularity of the Ramakrishna Mission throughout the country. Situated on the Ramakrishna Beach, the Mission has been in the city since 1939. Contributing a lot to the local welfare schemes, the Mission also provides medical and education facilities to the locals of the city. Daily prayers and religious programmes are a regular occurrence in the Mission at Visakhapatnam. 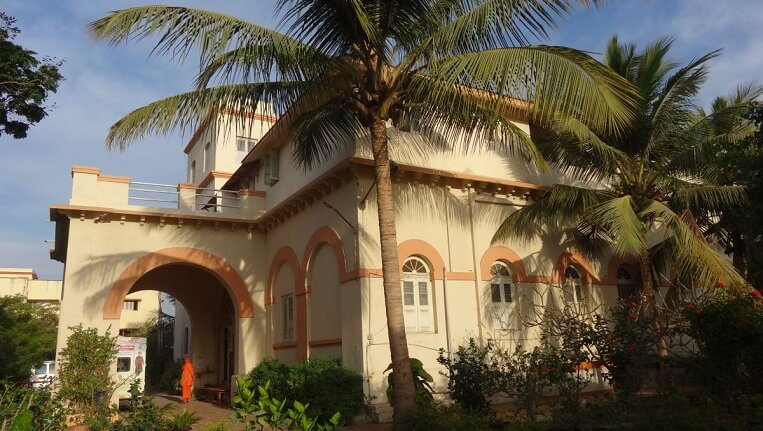 An Ashram that was blessed by the stay of Swami Vivekananda in the year 1891-1892, Ramakrishna Mission Vivekananda Memorial in Porbandar is one of the few Missions that have been personally associated with Swami Vivekananda. Providing social assistance to numerous underprivileged members of the society, the Mission has been a prominent part of the social welfare schemes in West Indian state. The Mission is also organising permanent exhibitions of Swami Vivekananda and various cultural events about Vedanta and its preachings.

Ramakrishna Mission has been an integral part of religious and spiritual preachings in India. A believer of Vedanta, the society has been working hard to provide a better life to thousands of poor and provide spiritual liberation to all. One of the best religious societies in India, the mission takes you a step closer to the end goal of harmony and inner peace. So, don’t think much and explore Ramakrishna Mission Ashrams and Temples in India.