Top 15 Places to Visit in Chittorgarh 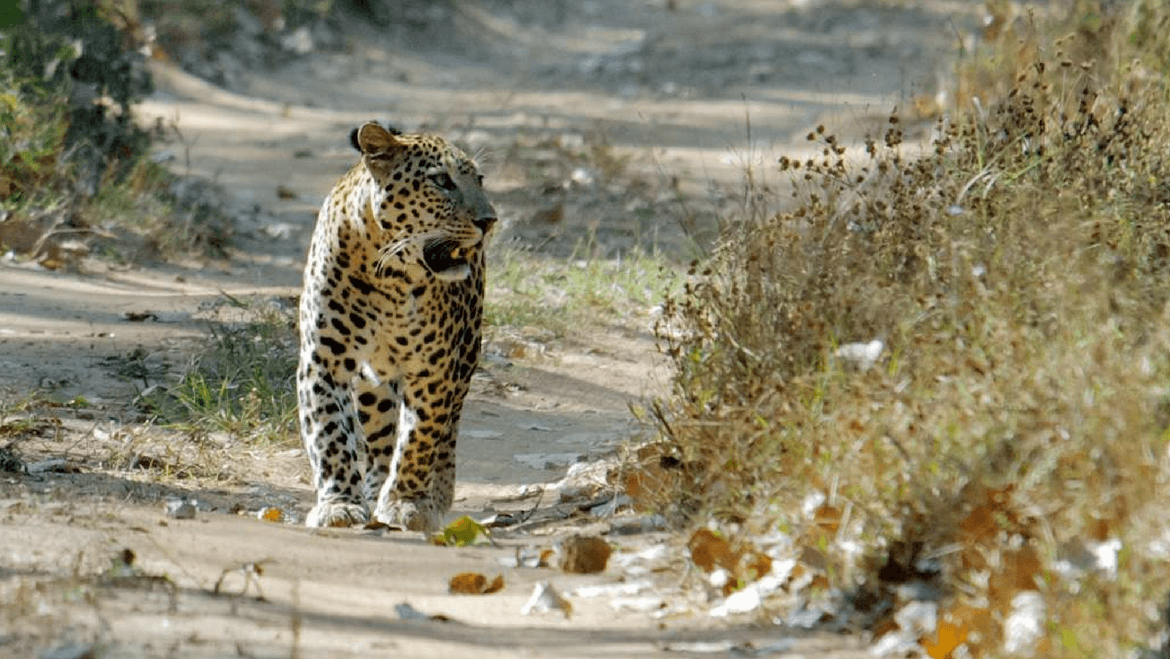 “Perhaps, it is the golden rays of the sun that make the fort and palaces in Chittorgarh glitter; illuminating its royal Rajasthani style of architecture that can allure any art connoisseur.”

The historical city of Rajasthan, Chittorgarh cannot help but display its imposing structures and stories of its tumultuous past. This place will abduct your mind as you wander around its stunning vicinity, exploring its famous attractions. It is here, you get to discover the largest fort complex in India after which the city was named as Chittorgarh. To offer a detailed introduction of this yet another glorious city in Rajasthan, this blog is composed. Find the best places to visit in Chittorgarh and also walk through its intriguing history. 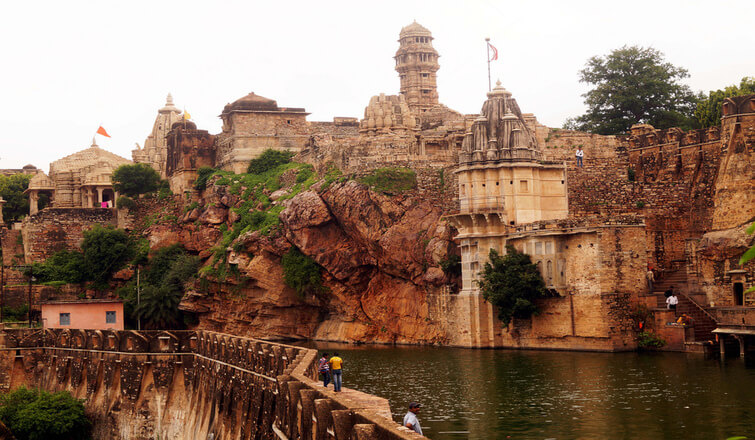 A complex that witnessed many events like the stormy wars; Chittorgarh Fort has always been the much talked about place in Rajasthan. Spread over 700 acres, it is one of the biggest forts of Rajasthan, in fact the largest fort in India, comprising several magnificent monuments. Within the complex, you will find many attractions that may keep you busy all day during your Chittorgarh tour, make sure to carry plenty of water to drink though. Chittorgarh Fort houses many temples inside its premises, including two beautiful towers, water bodies, interesting monuments and majestic palaces, some of which we shall be discussing below in the blog.

Best 50 Places to Explore & Outdoor Activities to Try in Rajasthan 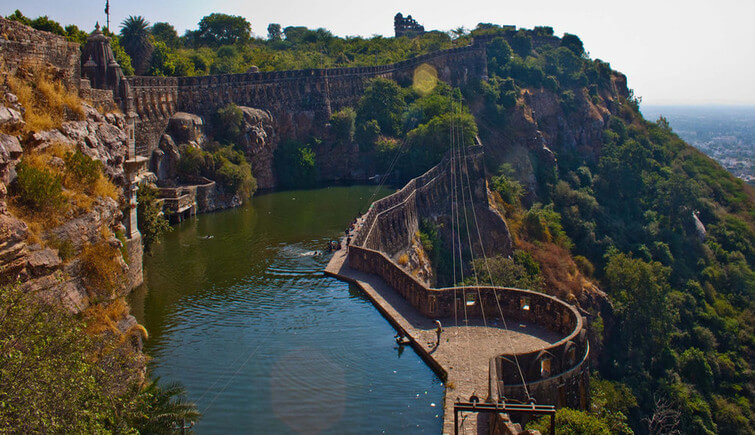 Amongst the above mentioned, one of the water bodies, Gaumukh Reservoir is the most important water tank in the fort. It is located on the western side of the fort and is frequently visited by Hindu pilgrims as it is believed to be a sacred site in Chittorgarh. Perhaps, the cow’s mouth-shaped point from where the water comes out to fill the reservoir has something to do with the belief. It is also said that, the water has been filling the reservoir continuously for several years, even during dry summers (though slow), however it remains a mystery as to where the water comes from. 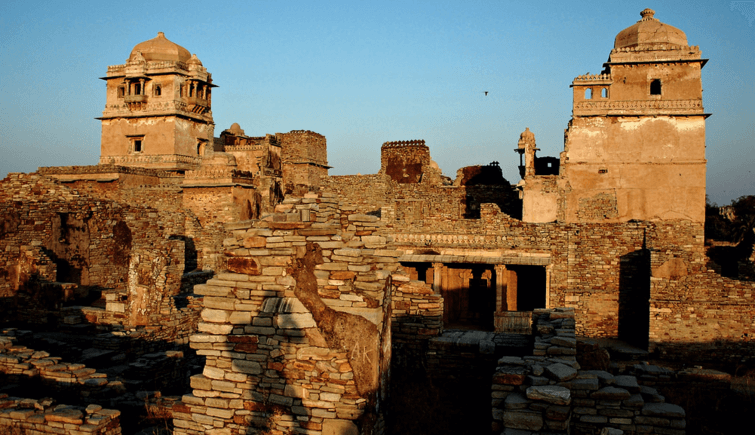 The place where the royals once lived their lives, today, Rana Kumbha Palace holds its popularity among history buffs. This attraction is located within the premises of the fort aligned with a series of canopied balconies. The entire palace revolves around ghost stories thus inviting adventure aficionados. Underneath the palace, there are cellars, it was here, Rani Padmini performed Jauhar (burning to death). Rana Kumbha Palace has a lot of stories to tell, and the only way you can experience and be a part of it is by adding Rana Kumbha Palace on your sightseeing list.

Check Out the Best Forts and Palaces to See in Rajasthan 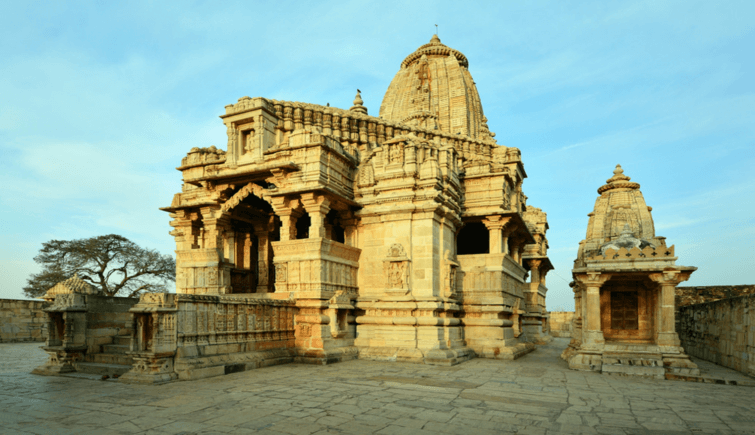 In the vicinity of the Chittorgarh Fort, you can visit a marvelously designed temple dedicated to Meera/Mirabai. A 16th-century Hindu mystic poet, once a Rajput princess, turned down her royal life and started living a simple life dedicating her time to Lord Krishna. It is said that, the temple stands as a reminiscence of the love Meera had for Krishna, and that you may feel a sense of devotion when you enter the premises of the temple. Inside the shrine, you will find many idols of Goddesses and Lord Vishnu. 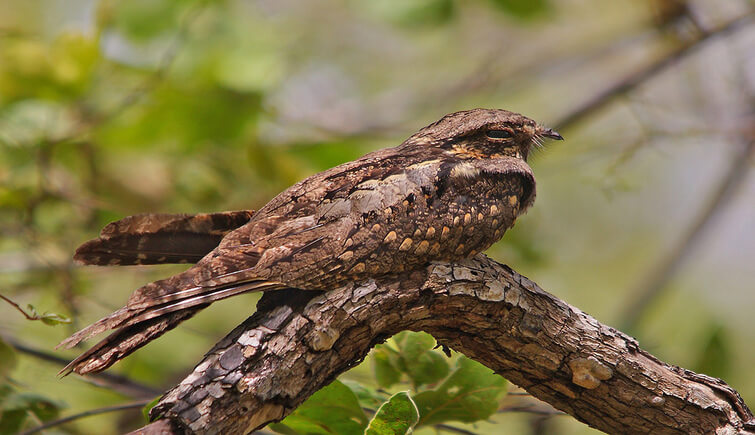 You can make your holiday in Chittorgarh even more exciting by visiting the Bassi Wildlife Sanctuary, which is some 30 kms away. The sanctuary is scattered in about 15,000 hectares and is carpeted by lush green beds safeguarding some of the beautiful species like the Panther. You may have an unavoidable feeling letting go of the place, especially if you are a nature lover because it is not just the animal and bird species that will capture your attention, but also the variety of flora will leave you mesmerized. 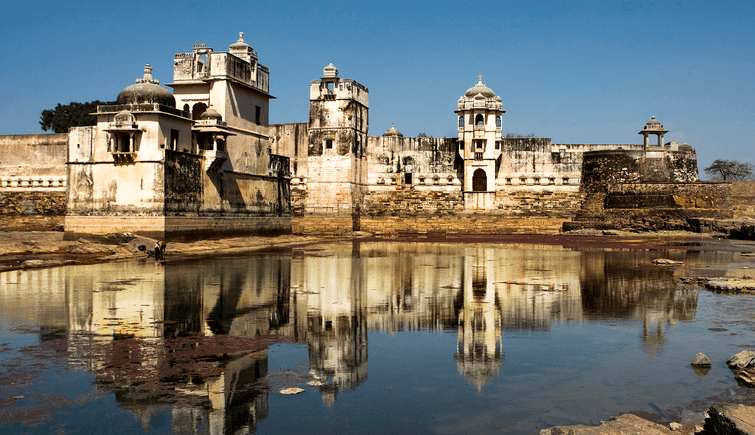 Much like the tale of Queen Padmini, known for her flawless beauty, the palace too radiates grace. Padmini Palace is located amidst the Chittorgarh Fort and is one of the popular tourist attractions in Rajasthan. The palace flaunts its three-storeyed beauty surrounded by water on all sides with outer walls painted in creamish colour. The architecture may resemble to that of Jal Mahal of Jaipur, ‘with only’ Padmini Palace being the miniature version of it. A tragic story between Rani Padmini and Alauddin Khilji revolves around the attraction that ended as expected in the death of the queen’s husband and her self immolation/Jauhar .

Most Preferred Tourist Destinations for Foreigners in Rajasthan 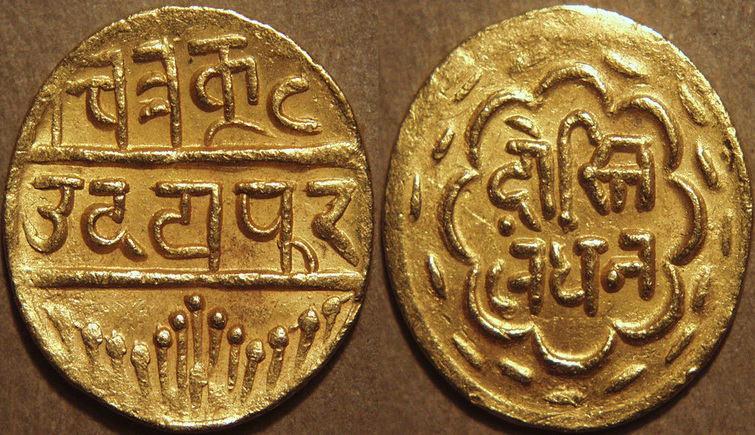 This village may not be as touristy as Chittorgarh Fort but it was once the main kingdom of the Mauryan dynasty. Thus, large number of relics were unearthed by the archaeologists here. The excavations proved that Nagari was a flourishing town(from the Mauryan upto Gupta period). A large number of old coins, punch marks, a stupa decorated with terracotta tiles and other interesting facts were discovered here. Therefore, those keen to learn more about the rich history of Rajasthan can plan a visit to Nagari while on Chittorgarh tour. 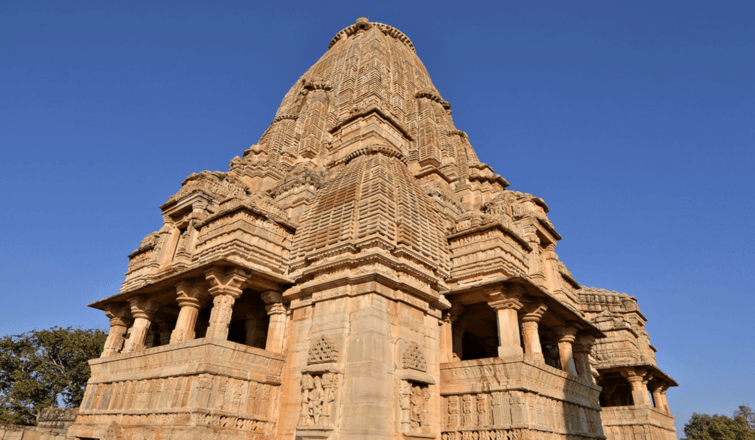 Dedicated to Lord Vishnu’s twelve incarnations, Kumbha Shyam Temple is a 15th-century shrine built by Maharana Kumbha. This shrine is located adjacent to Meera Temple and has a high apex dome structure and a high plinth base with the walls and ceilings decorated with images of the deities and sacred emblems. Its intricately detailed artwork is beyond describable, so neatly sculpted; the temple must be visited to explore its images that tell stories of Lord Vishnu’s incarnations. 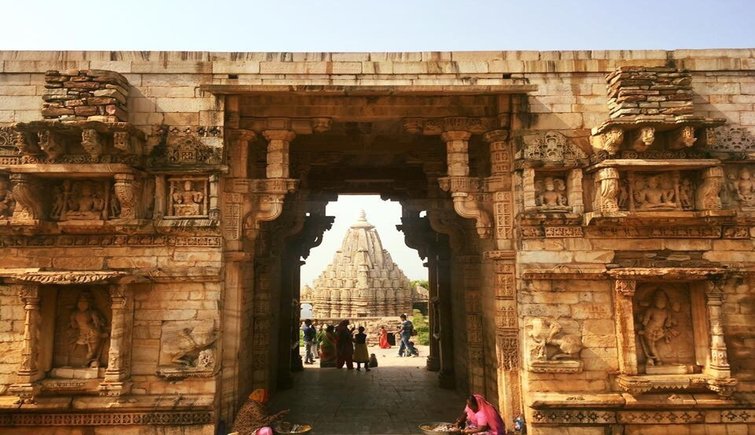 While on your tour in Chittorgarh, don’t limit your visits to just the forts, palaces and sanctuaries but also make a day (or half) in the Archaeological Museum. Once a fort built during 19th century by Maharaja Fateh Singh, later transformed into a museum by the Rajasthan Government, the Archaeological Museum around Chhittorgarh is one of the best places to see. The museum displays various valuable artifacts that were rooted from the undergrounds during excavations. There are collections of artifacts related to Hinduism and Buddhism sourced from the Chittorgarh Fort that includes art and craft objects, coins, Stone Age objects, frescos, paintings, metallic objects, weapons, inscriptions, sculptures and terracotta figures. 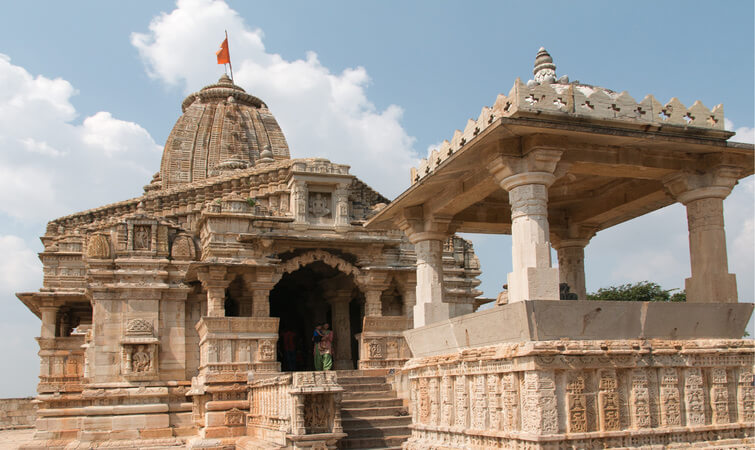 ‘Kalika Mata Temple is a much talked about place among the art aficionados, perhaps for its intriguing architecture style of the 14th century. This is one of the most captivating pilgrim sites, where Goddess Kali is worshipped. The temple is located between Padmini Palace and Victory Tower. It is said that, Kalika Mata Temple was originally a temple of the Sun God/Surya. And inside the complex, you can also find a Jageshwar Mahadev Temple dedicated to Lord Shiva. Besides, its past destruction(the attack by Allaudin Khilji), the temple has been restored with intricate design of ceiling and pillars and structures of a sculpted mandap and ratri jagrans. If you visit during festive season of Navratri, you may get a riveting sight of the temple, decorated with lights.

Best Things to Eat in Rajasthan under INR 20 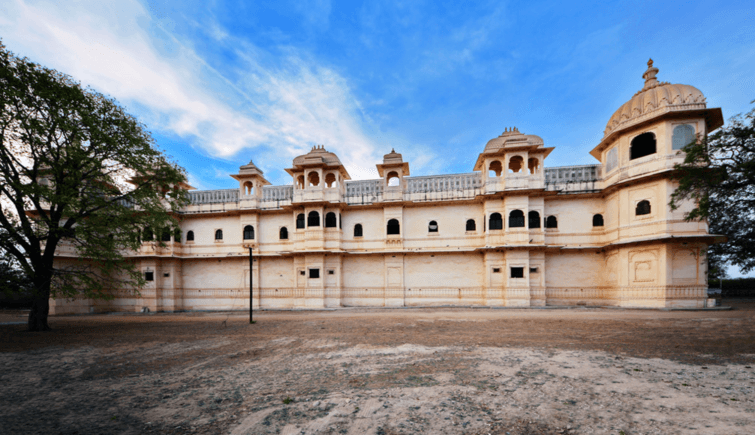 Its magnificent two-storey building, adorned by fresco paintings and carved pillars, Fateh Prakash Palace is one-of- its-kind attraction in Chittorgarh. This 20th-century palace was built by Maharana Fateh Singh, and now the State Government has converted into a museum. A visit here will let you witness an array of royal attire, ancient sculptures, beautiful paintings and pictures, and articles of historical significance. Fateh Prakash Palace’s major attraction is the idol of Lord Ganesh that is placed in the courtyard. It is it is quite an important thing to see in Fateh Prakash Palace. 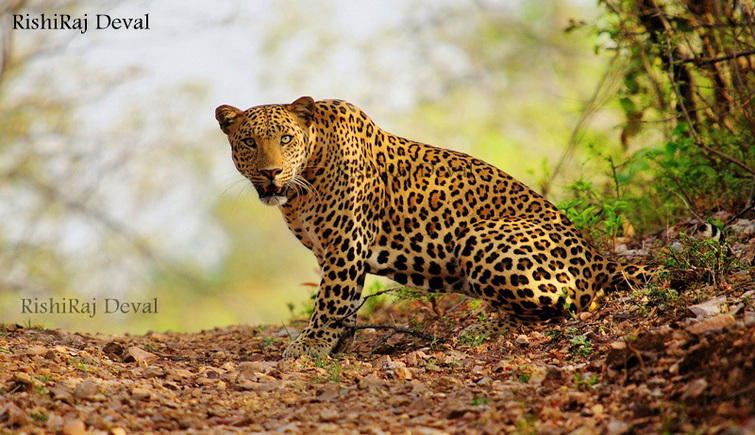 Roaming around this natural reserve may infect you with a disease called ‘wanderlust’, once you get infected, you may not get cured. Then again, who wants to, right? In Sitamata Wildlife Sanctuary, you will be spell bound by the unparalleled beauty of flora that spreads over a wide region on the Malwa Plateau and Aravalli Mountains. This sanctuary stores a number of trees like teak, bamboo, tendu, salar and amla. Here, you can witness rare and beautiful animal species like four horned antelope, flying squirrel, wild bear, spotted deer, jungle cat, nilgai, jackal and hyena. Other species that may also be found are the caracal wild boar, wild pangolin and leopards.

Lakes of Rajasthan that you must Visit 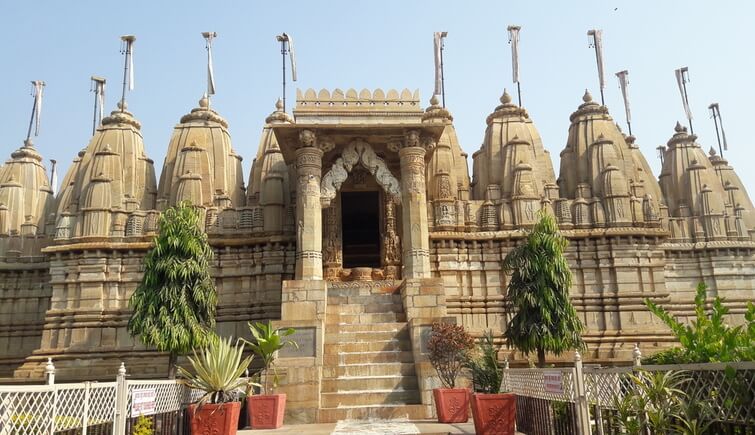 The magnificent jain temple is a group of temple complex built in the 11th-century and it is located close to the Fateh Prakash Palace. Sathis Deori Temple is a great place for Jain pilgrimage tour as it houses twenty seven temples. Its grand domes and pillars are carved and sculpted in a detailed way making it a major attraction not only for pilgrims but also for travellers. Inside the complex, Bhagawan Adinatha temple is the largest and most popular shrine having fifty-two devkuli. Sathis Deori Temple is a well-maintained holy place to seek refuge and blessings. 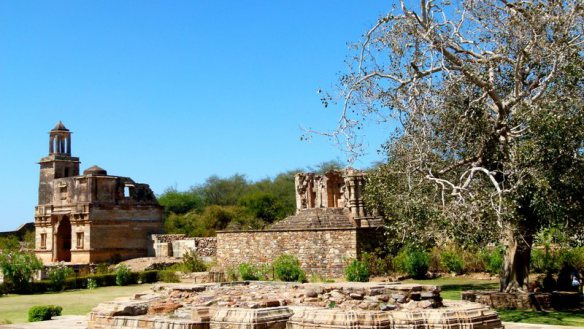 Maha Sati Sthal located between Victory Tower and Sam Dewar’s Temple is an attraction where once the ruthless act of Jauhar (burning to death) were practiced by the Rajput women. Fenced-in by the Archaeological Department to prevent any trespassers, this Sati Sthal is called the ‘ground of death.’ 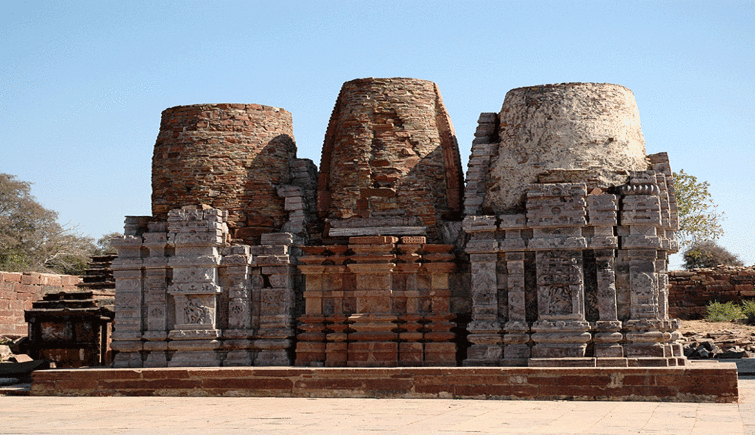 Amongst the many best places to visit, Menal provides an offbeat destination feel to the travellers visiting Chittorgarh. A visit to Menal will expose you to its wondrous monuments and temples. One major attraction that is a must visit here, is the (unnamed) waterfall. Menal is a spectacular place and during mid-October or any dry season, you can cross the river to reach the two temples on the other side along with paying a visit to the Rutirani Palace. Also, Menal is popularly known as mini Khajuraho since it has a breathtaking landscape dotted with many temples. This place of tourist interest is located 90 km from Chittorgarh along the Chittaur – Bundi Road.

Did this list of all the must visits gave you an itch to backpack and travel to Chittorgarh? I hope it did. Chittorgarh is not difficult to reach, and is well connected by road to almost all parts of India, also getting a bus or a cab won’t be a hassle. There is a railway station in new township linked with all major rails and the nearest airport is in Udaipur/Jaipur.

However, if time prevents you to book tickets and accommodations facilities, there is no need to worry. You can call us at +91-9212553106 or send us a mail with your requirements at info@tourmyindia.com and we will offer you with best tour packages so you can have a comfortable vacation amid the historical ruins of Chittorgarh, Rajasthan.