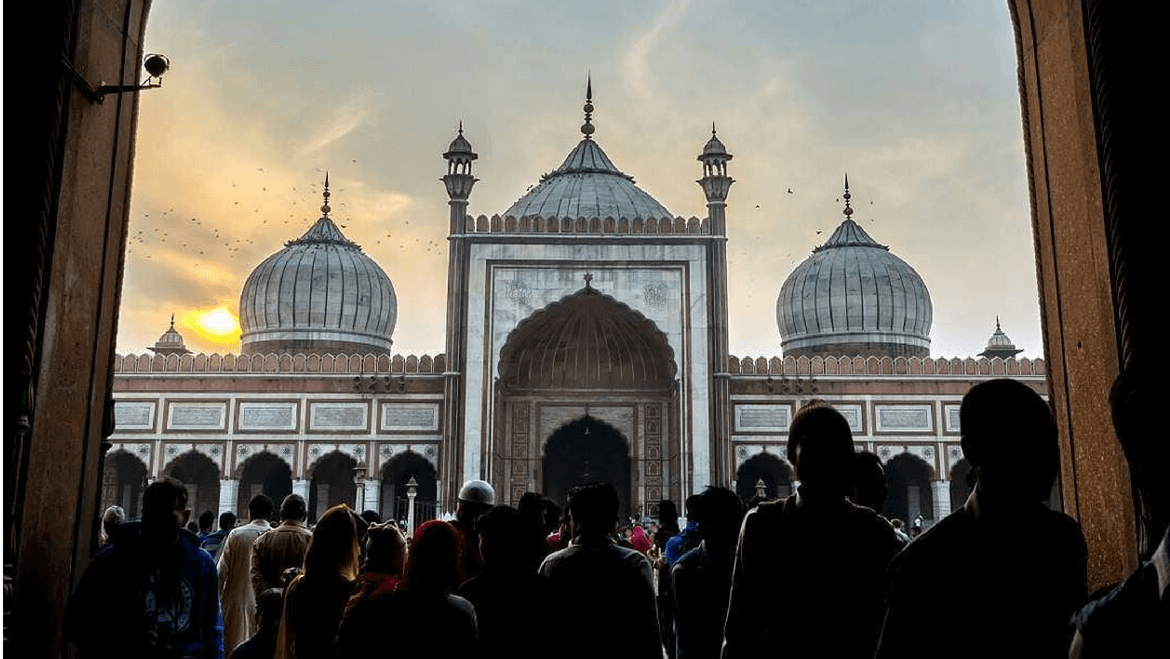 Rajasthan is not only about Rajput architecture and history, but also a fine commentary on the brief history of glorious Muslim period. Many a times, we overlook the influence of Islamic architecture on Rajasthan but the truth is this unnoticed architecture style adds more grace to this already beautiful royal state. There are a number of dargahs and mosques in Rajasthan that exhibit exemplary Islamic style of architecture. If at all, you decide to explore Rajasthan beyond its landscape and royal palaces, these Muslim edifices are the perfect way to begin your quest and spiritual journey as well. Here is the list of some well-known mosques in Rajasthan:

Ukha Masjid is situated in Bayana in Bharatpur district of Rajasthan. This temple-converted-mosque is located inside a complex that was built by Baha al-din Tughrul. The shrine is also called the Mosque of Ukha Mandir and is constructed of red sandstone. The masjid is believed to have been constructed in 720 AD.

This mosque is situated in the Kharadi area of Pali district in Rajasthan. It is believed to have been built by Sultan al-Tarikin in the late 13th century or the early 14th century. The mosque is beautifully designed with its most attractive part being its design which is similar to that found during the reign of Khilji Dynasty. The mosque is also reckoned to be the only structure in Nagaur and the first Islamic building of the town.

An ancient mosque, Khanzadon ki Masjid is located inside a fort atop the hill in Bari Khatu, Rajasthan. According to the two epigraphs found in this mosque, one can conclude that it was constructed in 1482 AD by Malikul-Umara Tajud-Dualla Waddin Malik Ladla Khalas during the rule of Majlis-i-Ali Firoz Khan, son of Salah Khan. The architecture-style of the mosque is contemporary of the Arab style and is kept simple yet elegant.

Situated in Nagaur, Khanqah of Shaikh Suhrawardi is a prominent mosque in Rajasthan. This sacred shrine is reckoned to have been built in 1552 AD by Miyan Khwaja, the son of Shuker or Shakar Batani. It is located outside the Nahar Pole and houses the tomb of Shaikh Bayazid, the son of Shaikh Sulaiman. The mosque has some inscriptions engraved on its walls that tell about the life of Shaikh Sulaiman, who was respected by both the Muslim and the Hindu community.

Khalji Masjid or Hazirawali Masjid is said to be built in the reign of Firoz Shah Tughlaq in 1378 AD. The mosque was in ruins until recently when it was rebuilt for people to offer prayer. Although not much traces of the ancient architecture is left in this shrine, one can make a guess of its excellent architecture with the help carved stones with different types of motifs found here. Rest, the walls, roof, lobed arches in front of the prayer chamber and the arch of the prayer hall have all been rebuilt after major damages.

This mosque is situated in Dargah Bazaar in Ajmer, Rajasthan and is believed to have been constructed by Bai Tilokdi Kalawant or Trilok Devi, the daughter of famous musician Mian Tansen. This holy shrine was built in the year 1652 AD. According to an inscription, it is believed that like her father Bai Tilokdi, Kalawant was also a musician. The inscription also tells us that Abu Fazl was the person who had named Mian Tansen’s son as Tantaray Khan (his original name was Bilas).

Built to honour saint Khwaja Muinuddin Chisti, this particular Idgah is situated in Ajmer, Rajasthan. The mosque was constructed by Nawab Mirza Chaman Beg, the governor of Malwa and Shamsuddin, under the Sindhia Rajas. The Idgah is located on the suburb of Ajmer and is one of the fine specimens of Islamic architecture in Rajasthan.

The shrine of Shah Hafiz Ullah is an example of the finest Islamic style of architecture. This mosque was built to honour Shah Hafiz Ullah, who was considered to be a religious man in the late Mughal period. According to an inscription found here, this shrine is believed to have been built in 1790 AD during the rule of Shah Alani. There is only one prayer hall in the mosque and its columns and arches resemble another famous mosque in Rajasthan called Daman Kuh.

One of the most imposing mosques in Rajasthan, Taleti Masjid is situated in a hill fort in Bayana. The mosque is situated at the bottom of the hill and thus got its name as Taleti. An engraved inscription in the mosque confirms that it was built in 1420 AD by Mahtaf Khan during the reign of Auhad Khan Karim ul Mulk. As per history Auhad Khan was the son of Auhadi who had established Auhadi Dynasty. The mosque is simple in architecture yet has a very elegant look.

Also called Royal Mosque or Aqsa Mosque, Shahi Masjid is located in Baran, Rajasthan. This mosque is also referred to as Jama Masjid but now it lays in a dilapidated condition. Its construction date is not known; however an inscription on the mirab states that the shrine was restored in the reign of Akbar by one of his officials. It is also believed that this mosque was built over the ruins of a temple, so most of the material used in building it belonged to that temple.

Most Visited Destinations in Rajasthan by Foreign Tourists

Also known as the Dargah of Amir Kabir, this shrine is situated in Kota, Rajasthan. The Dargah is situated close to the Chambal River, which adds to the beauty of this holy place. It is a huge complex and has the grave of Saint Amir Kabir under a single massive piece of rock. The architecture of the dargah is excellent and adds grace to this place, where people come in search of peace and serenity.

Dargah Masjid is a 13th century mosque and believed to have been built after the construction of Shahi Masjid. This mosque differs in architecture style from other mosques in Rajasthan and thus is considered as an exclusive piece of architecture of the Sultanate Period.