Top Places to See at the Hidden Gem of Karnataka, Chitradurga 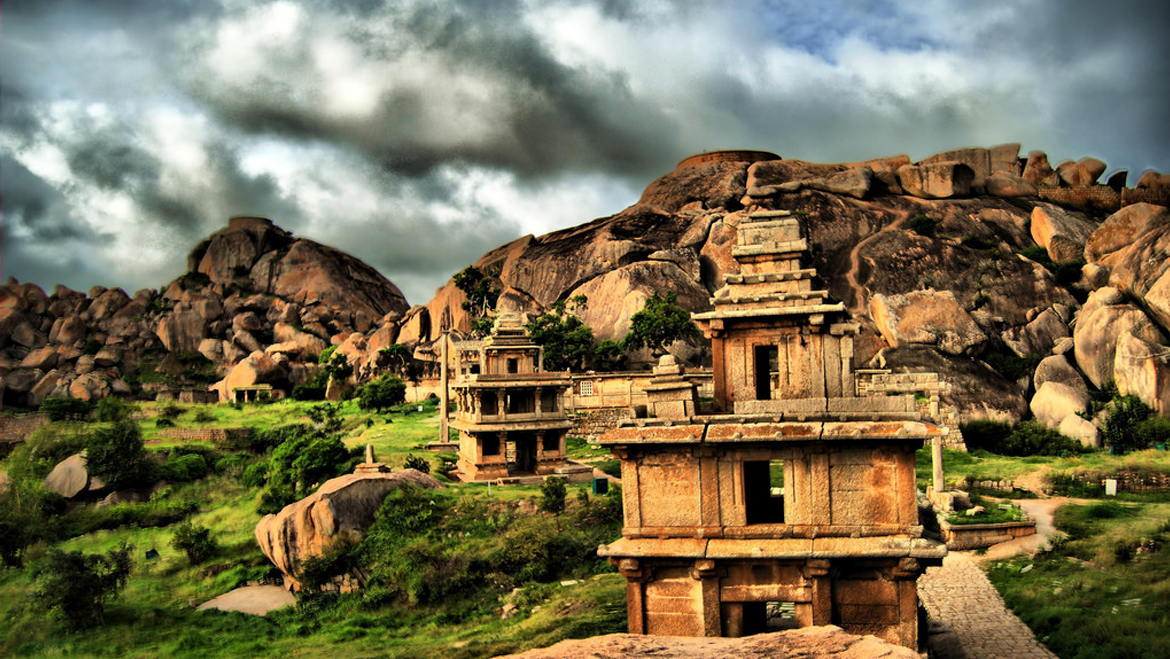 What’s the first thing that comes to your mind when you think of a vacation in Karnataka… Bengaluru, Coorg, Mysore, or Hampi? Yeah, you’re right but what if you have explored them all and are seeking to see something new? Well, in that situation Chitradurga is the place which is an eclectic mix of all these travel destinations. So, why not visit Chitradurga! Moreover, visiting this place can give you a different vacation experience by not sticking to the most common tourist destinations in Karnataka as it is one of those secluded but popular tourism places in the state that holds a treasure trove filled with unbelievable places, invincible experiences and enduring memories to cherish. So, here I present the rundown of those top places to explore in Chitradurga on your next trip to Karnataka. 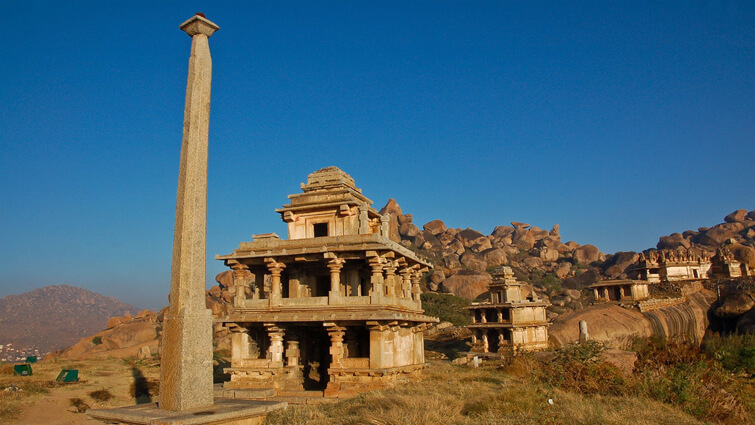 Such is the charm of Chitradurga Fort in Karnataka that tourists never miss a chance to gaze upon the beauty of compelling soaring boulders present in the vicinity of the fort, along with the pulchritudinous architecture of this stunning relic. Once a home to Tipu Sultan, the fort has various passages to the several parts like its warehouses, mosque, ancient temples, and water reservoirs. Originally built by Chalukyas and Hoysalas and later expanded by The Nayakas of Chitradurga, the fort houses 18 temples in its upper territory. If you want your holidays to be filled with historical picturesque destinations, then Chitradurga Fort should be your first stopover to capture some resplendent sights in the lens of your cameras.

Karnataka’s Heritage Tourism at a Glance 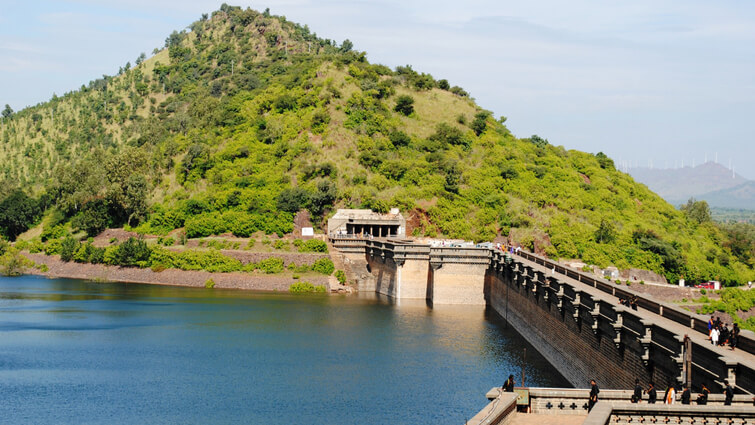 Another picturesque site built across the Vedavathi River, which must be added to your list of must-see places in Chitradurga is Vani Vilas Sagar. Thousands of tourists flock to Chitradurga every year just to feast their eyes on the famous Mari Kanive a.k.a Vani Vilas Sagar. Located near Hiriyur Taluk, this dam is an exotic masterpiece of incredible architecture erected by Mysore Maharajas. For over a decade, this dam has been served as a top tourist attraction in Chitradurga district, and thus, exhibits some candid views of lush greenery, rolling hills, and azure water of the river.

Nature Weekend Tour in and around Karnataka

Chandravalli – Walk Back in Time with Visiting the Ancient Caves 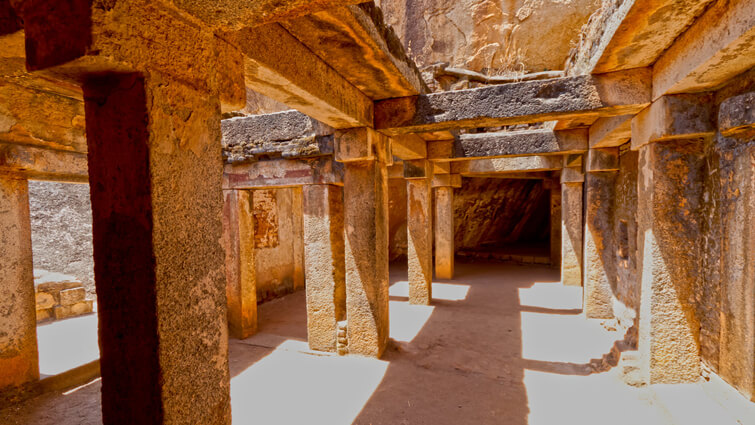 Get ready to be baffled in Chitradurga! At a distance of 4 km from Chitradurga, Karnataka lies a natural marvel called Chandravalli Hills. An archaeological site formed by three hills – Chitradurga, Kirbanakallu, and Cholagudda, Chandravalli was once a ruled by Chandrahas, and thus the name. There was a time when a number of belongings were discovered at Chandravalli during excavations which include, coins, earthen pot, and painted bowls from the time of Vijayanagar, Hoysalas, and Satavahana dynasties. Coins of Roman emperor, Augustus Caesar and the Chinese Han dynasty emperor, Wu Ti were also found during the excavation period. This place is a concealed agglomeration for those who are more inclined towards the prehistoric period. Surrounding rolling hills with a stream in the of this archaeological site, there lies Chandravalli Caves, also referred as Ankali Mutt. These caves take you 80 ft. below the ground where you get a chance to witness the great ancient wall art, consisting of carvings and paintings. Adjacent to the cave, there is Chandravalli Cave Temple which houses a Shiva Linga under a massive stone. 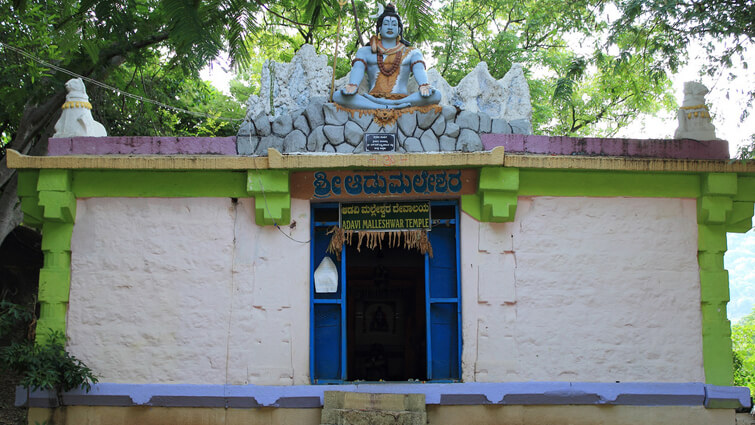 Your tour is incomplete if you haven’t added any temple sighting in your list of visiting places in Chitradurga. Adumalleshwara Temple is one of the paramount shrines to be visited. Located at distance of 4 km from the fort, Adumalleshwara is a cave temple devoted to Lord Shiva. After the darshan of the temple, one can also explore zoo area which is sited in the temple vicinity. Here, you have the opportunity to do a sightseeing tour to catch a glimpse of big felines and other wild creatures like deer, crocodiles, rabbits, peacocks, bears, and many more.

How to Plan Temple & Sightseeing Tour to Karnataka? 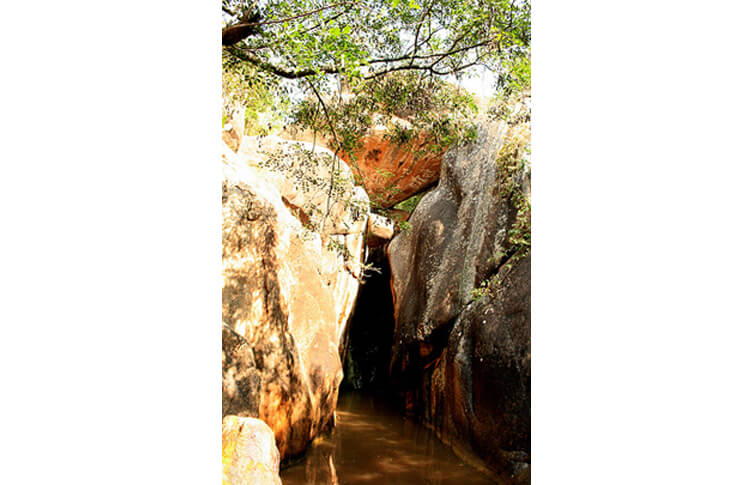 Before heading to Adumalleshwara Temple, make sure your day travel itinerary should spare you some time to visit Himavat Kedaya, as it is some distance away from the temple. Himavat is one of the highly revered attractions in the whole district of Chitradurga. After a 1km short trek from Adumalleshwara, you get to perceive the famous prodigious view of Himavat Kedaya, where a perennial brook runs through the mouth of Nandi (a sacred bull known as the vehicle of Lord Shiva). This whole hallowed view is the star talk of this bewitching place.

Famous Waterfalls in India You Must Not Miss to Visit 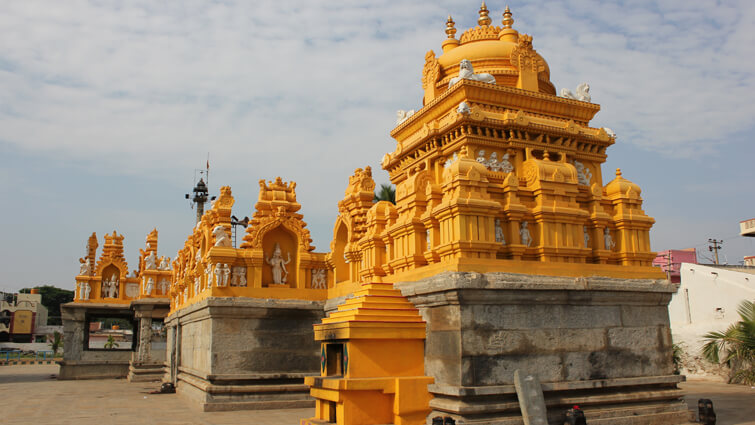 An ancient Hindu temple comfortably sited 43 km away from the Chitradurga city in Hiriyur on the bank of River Vedavati, is Teru Malleshwara. The Dravidian style of architecture of this divine place over a 500-year-old construction. Inside the temple, you get to see ceiling painted with scenes from Shiva Purana and Ramayana Epic.

Fall in Love with these 50 Beautiful Temples in South India 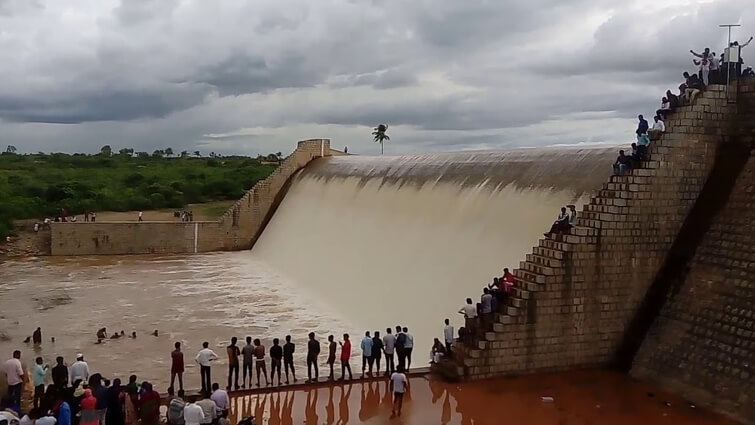 Goggle at the serene and uninterrupted views of a luxuriant surrounding of this amazing water body. Gayatri Jalashaya is a perfect place for sighting surreal sunset and tranquil water of River Suvarnamukhi in Chitradurga. Gayatri Jalashaya is a water reservoir, built across Suvarnamukhi River by Maharaja of Mysore and is now reckoned to be one of the prominent picnic spots in the district of Chitradurga. 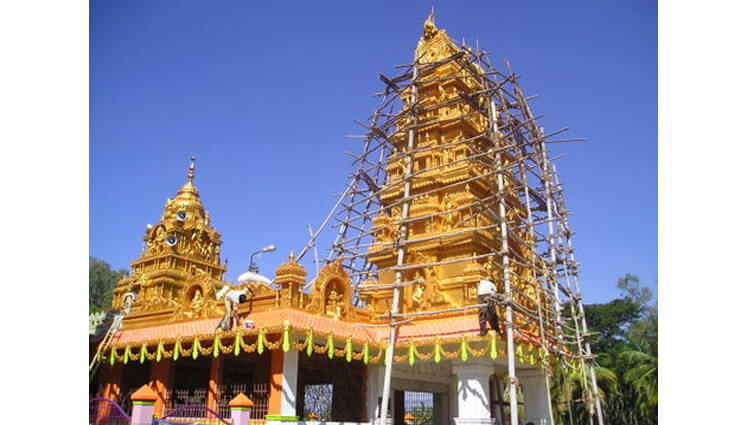 Exactly at a distance of 35 km from Chitradurga, there seated Holalkere. Primarily a pilgrimage site in the district of Chitradurga, Holalkere is known for its gorgeous and famous Ganesha Temple which was established in 1475 CE by one of the Palegars of Chitradurga. Thousands of devotees visit this place throughout the year to pay a homage and offer their prayers to Lord Ganesha. 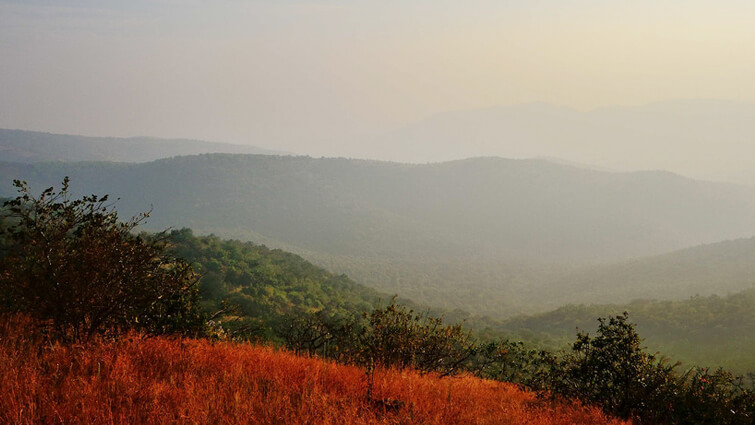 Right out of a dream, a scenic hill station (situated 14 km away from the main city) worth comparing to Ooty in the district of Chitradurga is Jogimatti. Expect some awesome vistas of towering mountains, lush green forests, and garden-fresh valleys en route. Spend some quality time wandering around and exploring the diverse flora and fauna of this beaut hill town.

Hill Stations in Karnataka to Beat the Summer Heat 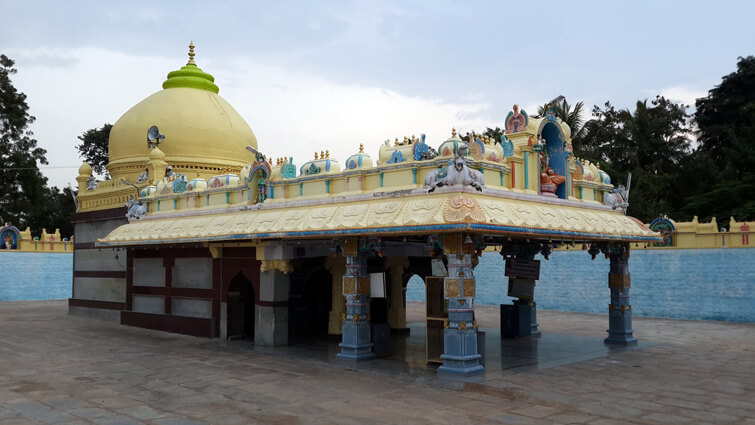 Your tour to any city or town of South India is nothing without covering two-three pilgrimage sites. Thus, another pilgrimage site in Chitradurga to add in the list is Nayakanahatti Temple. Dedicated to Sage Thipperudraswamy, this temple is situated 36 km from Chitradurga city and is said to be the resting place of the sage. In the month of Phalgun (February and March), an annual fair is organized here, which witnesses an abundance of tourists, and thus, one of the best places to visit in Chitradurga.

11 Popular Things to Do in Coorg

How to Reach Chitradurga?

In order to reach, Bengaluru Airport serves as the nearest airport from Chitradurga, which is around 200 km from the place. However, those who want to reach here through railways, they can board a train for Chitradurga Railway Station, which is well-connected with other major cities in India making it easy for travellers to get access to this beaut place even from a far distance. Furthermore, national and state highways connect Chitradurga with its neighbouring cities and towns like Bengaluru, Hubli, Bellary, and Sira. Visitors coming from these cities and towns can also opt to board a bus or self-drive to Chitradurga.

When to Visit Chitradurga?

The months from October to March are the best time to visit Chitradurga when the temperature is comparatively low, and the weather is neither too hot nor too cold.

Well, I hope, this blog catered to your need of learning what the bewildering district of Chitradurga is crammed with. If you found this blog helpful please give us a thumbs-up and share it with other looking for some insight on Chitradurga. In case you’re planning a holiday here or anywhere in Karnataka, contact us at +91-8744012050 and info@tourmyindia.com to book the best Karnataka travel packages. We at Tour My India design holiday packages of your choice so that you get to relish the best travelling experience.