Kedarnath: Story of Regaining Old Charm after a Dire Disaster 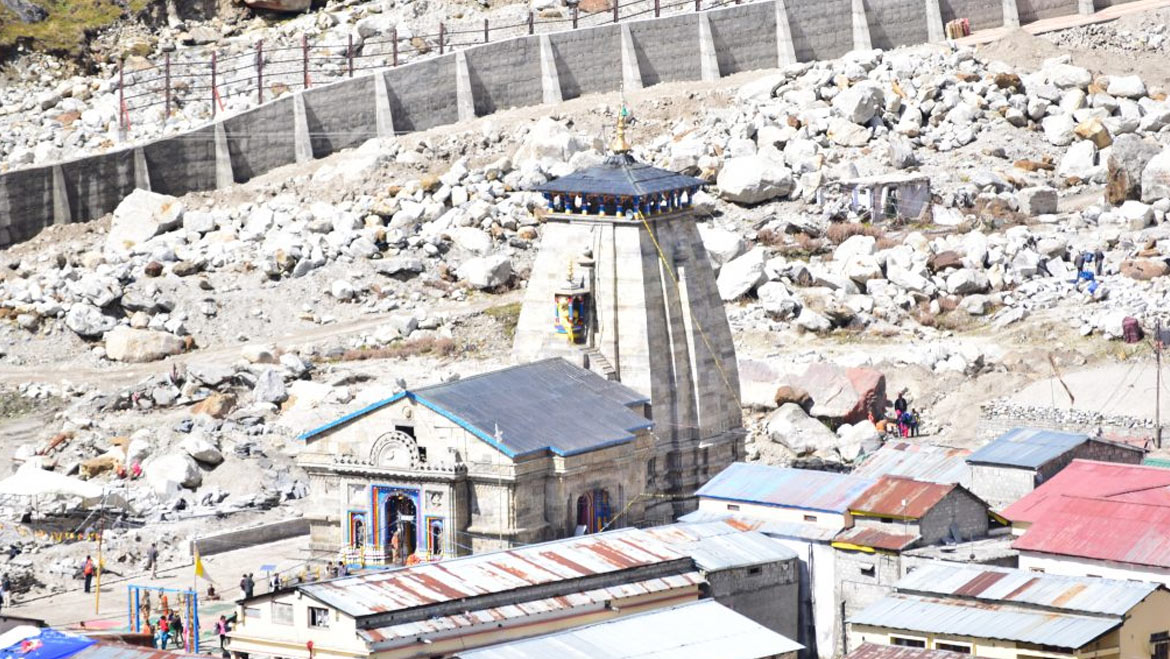 Located at a distance of around 21km from Sonprayag in Rudraprayag district of Uttarakhand, Kedarnath is the highest Shiva shrine among the 12 Jyotirlinga temples of India. The temple is based at a height of around 3581m and has been built at around 8th century AD. According to mythologies the actual temple of Kedarnath was constructed by Pandavas. Today’s Kedarnath shrine is built by Adi Shankaracharya, the famous Hindu monk. The temple of Kedarnath is surrounded by lofty snow clad mountains and undisturbed green patches of lands. Apart from the followers of Lord Shiva, this temple town is visited by trekkers and avid nature lovers for its charismatic vistas.

Kedarnath stands on the head of the hallowed river Mandakini and appears as a perfect representation of Goddess Ganga flowing from the matted locks of Lord Shiva. According to Hindu mythologies, the temple of Lord Kedarnath was actually built by Pandavas, the central characters of the great Indian epic Mahabharata. It is said that after the completion of the great war of Kurukhsetra, the Pandavas felt guilty for killing their own relatives and sought the blessings of Lord Shiva for redemption. Shiva tried to make them feel guilty and kept fleeing from place to place. In this process, Shiva transformed himself into the form of a bull and took refuge in Kedarnath. Shiva was about to hide himself inside the earth when Bhima, the 2nd of the Pandavas got a glimpse of the hump of that bull and caught hold of it. The remaining parts of the Lord appeared in some other parts of Uttarakhand, known as Tungnath, Rudranath, Madmaheshwar and Kalpeshwar. These 5 religious travel destinations of Uttarakhand are together known as Panch Kedar. The present temple of Lord Shiva at Kedarnath is built by Adi Shankaracharya. There is a huge bull statue in front of the temple gate which appears as a guard to the temple.

Looking back to the devastation

Uttarakhand has experienced several devastating natural calamities in the past among which the cloudburst and resulting flood was perhaps the worst. Though the main devastating day of the flood was recorded 16th June, 2013, the heavy rainfall session started from 14th June and continued till 17th June, 2013. During this period Uttarkhand received 375 percent more rainfall than the benchmark level during a normal monsoon season. In Dehradun, 16th June was recorded as the wettest day in last 5 decades.

Death and damages at Kedarnath

Soon after the devastation, the Government of Uttarakhand sought help from the central government as well as from World Bank. As a result, the World Bank in partnership with the Government of Uttarakhand and the Asian Development Bank, along with the Global Facility for Disaster Reduction and Recovery (GFDRR) conducted a Joint Rapid Damage Needs Assessment (JRDNA). After a thorough analysis of damage to a variety of social and economic sectors for a week by the investigating agency efficient recovery and reconstruction efforts began. The Archaeological Survey of India (ASI) took the initiative to restore the beauty of the temple complex. The first phase of restoration was over by November 2013 itself. In its second phase of restoration, the temple was renovated by ASI. The scratches on the walls and floors of the temple were filled up.

The flash flood occurred in 2013 was indeed a threat to the entire ecosystem. The Government of Uttarakhand took it as a challenge and turned conscious enough to ensure the safety and security of the pilgrims heading to Chota Chardham Yatra. Here are a few effective measures taken by Uttarakhand Government:

The development process in Kedarnath is still on and it is expected to be over by 2016. The Kedarnath Yatra for 2015 has started from April 24. So, we see how this blessed land of God has been raised from its ashes by constant endeavours from the Government and millions of philanthropists, who came forward in the time of the great crisis. It is the united effort of the well-wishers, government and international organisations which have helped Kedarnath to re-establish its old charm and become a safer pilgrimage destination. The world is all about accepting new instead of lamenting about the past and perhaps Kedarnath could rightly assimilate this truth. And that is why today, in 2015, total 50318 people visited Kedarnath in the first month. Uttarakhand tourism minister has already declared the state safe and secure for Chardham Yatra and people are booking their tickets at rampant pace.

Subscribe our India Travel Blog and stay updated with travel news, destinations and holiday ideas in India along with best holiday travel packages and offers.