The golden triangle tour is a quintessential introduction to the rich culture, tradition and history of India, especially for the first time travelers. The 8 days and 7 nights holiday package consists a tour to major destinations of India - Delhi, Agra and Jaipur. You can also visit the city of Gwalior and see the huge Gwalior Fort that was built in the 8th century A.D. The golden triangle tour is no doubt one of the popular tourist circuits in India that offers a wonderful opportunity to marvel the grandeur, glory and vibrant culture. Moreover, our expert representatives will help you in planning a perfect tour itinerary that will leave you mesmerized with pleasurable memories for lifetime.

Day 01: Arrive Delhi
Upon arrival at Delhi international airport meet with our representative at the airport arrival lounge. After meet and greet transfer to the hotel for overnight stay. 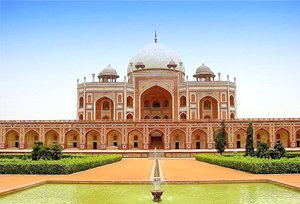 After breakfast we will proceed for full day guided sightseeing tour of Old and New Delhi. Morning we will be visiting Old Delhi where we will explore the ancient monuments, narrow streets and bustling markets.
First we will visit Old Delhi, the 17th century walled city of Shah Jahanabad, Visiting the great Jama Masjid built in the year 1656 AD by the Mughal Emperor Shah Jahan, it is the largest & best known mosque in India. Later we walk down or take a rickshaw ride through Chandni Chowk, the old marketplace of Shah Jahanabad now a picturesque bazaar to reach Red Fort, built in the year 1648 by Shah Jahan.
In the afternoon visit New Delhi, we will visit Raj Ghat, memorial to the Father of the Nation, Mahatma Gandhi. It is a simple black marble platform that marks the spot of his cremation on 31 January 1948. Further we drive past India Gate, memorial built in the year 1931 to commemorate the Indian soldiers who died in the World War I & the Afghan Wars. The names of the soldiers who died in these wars are inscribed on the walls. President's House, the official residence of the President of India, built in the year 1931. Until 1950 it was known as Viceroy's House & served as the residence of the Governor-General of British India.
We will also visit Humayun's Tomb, memorial of Mughal Emperor Humayun, built in the year 1562. The complex is a World Heritage Site & the first example of this type of Mughal architecture in India. Qutub Minar, built in the year 1206 by Qutub-ud-din Aibek. It is the tallest (72m) brick minaret in the world, an important example of Indo-Islamic Architecture.
In the evening return to hotel for dinner and overnight stay. 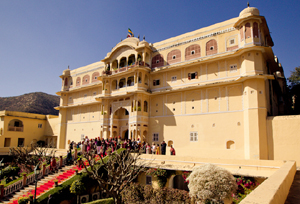 After breakfast we will leave for Jaipur via Samode. In Samode we enjoy the sightseeing of fort and palaces. Here we will also enjoy a bullock-cart or camel-car ride and wil have a short village tour to come to know the art, culture and the living style of the people of Samode. Here you will see the real India having the experience India rural life, traditional agriculture farming and cattle milking.
Lunch will be organized at Samode Palace. Here one will have the opportunity to visit the Darbar hall for the extravagantly florid and hand painted gallery and the Sheesh Mahal or the hall of mirrors.
Samode palace is heritage monuments and structures built by the noble feudatory. It was initially built in the 16th century as a Rajput fort, but in early 19th century, under the nobleman Rawal Berisal, it was converted from a fort into an exquisitely designed palace in Rajput and Muslim architectural style. In the year 1987, it was converted into the heritage Samode Palace Hotel.
Later in the evening return to Jaipur. Upon arrival check into the hotel. Overnight stay at hotel. 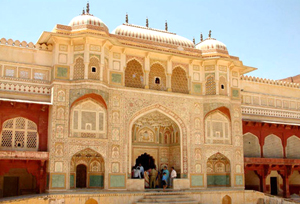 Today we will have full day sightseeing tour of this pink city, starting from a magnificent visit to the Amber Fort. Amber Fort was the capital of this state long time ago. Visit the Sheesh Mahal or the Hall of Victory glittering with mirrors.
Later in the afternoon, we will take a guided sightseeing tour of Jaipur city. The city of Jaipur was painted in pink colour a century ago in honour of a visiting prince. Ever since, Jaipur has retained this pink colour. Built by Maharaja Jai Singh, a notable astronomer, this city is 260 years old. While in Jaipur, visit Maharaja's City Palace, the Observatory and Ram Niwas Gardens. Drive past the Hawa Mahal. Stay overnight at the hotel.

Day 05: Jaipur - Fatehpur Sikri - Agra
After breakfast we will leave for our next destination Agra. On our way to Agra we will stop to visit Fatehpur Sikri, just 40 km before Agra. Fatehpur Sikri was built during 1571 and 1585. Fatehpur Sikri is one of the finest examples of Mughal architectural splendour at its height. Though the city is in ruins, it is a place to visit if once.
Further we will continue drive to Agra. Upon reaching transfer to the hotel. After fresh-n-up we will visit the massive Agra fort. Built principally as a military establishment by Akbar in 1565, the red sandstone Agra fort was partially converted into a palace during Shah Jahan's time. Though the principal structure was built by Akbar. Overnight stay at hotel. 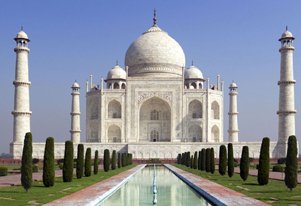 Early morning we will transfer to visit the famous Taj Mahal at dawn, a white marble memorial built by Shah Jahan for his beautiful wife Mumtaz Mahal. This monument took 22 years to be completed and was designed and planned by Persian architect Ustad Isa. Apart from its stunning design balance and perfect symmetry, the Taj is also noted particularly for its elegant domes, intricately carved screens and some of the best inlay work ever seen.
Later return to the hotel for breakfast. After breakfast we will transfer to the railway station to board the train for Gwalior. Upon arrival transfer to the hotel. Overnight stay at hotel. 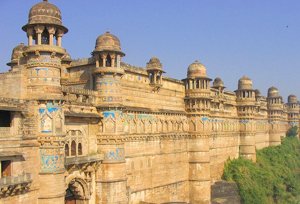 Morning after breakfast proceed for sightseeing tour of Gwalior visiting the enormous 19th century Jai Vilas Palace. This Palace is famous for its ornate chandeliers & crystal. A few of the rooms have in converted into a museum filled with the Scindia dynasties memorabilia.
Further we will visit the huge Gwalior Fort - where a sun temple is believed to have been constructed within the area of the fort. Also visit Man Mandir which is a six towered palace & which forms the eastern wall of the fort. The fort has monuments dating back to 8th century A.D. onwards and is one of the largest forts in India. Also visit the Gujri Mahal, a turreted palace of stone now houses the archaeological museum. Gwalior also offers the Tomb of Muhammad Ghaus, a saint worshipped by the Mughals & the Tomb of the famous musician Tansen.
Later in the afternoon transfer to the railway station to board the train for Delhi. Upon arrival at Delhi railway station meet with our representative and transfer to the hotel. Overnight stay at hotel.

Day 08: Delhi - Departure
Transfer to the international airport to board the flight for onward destination.