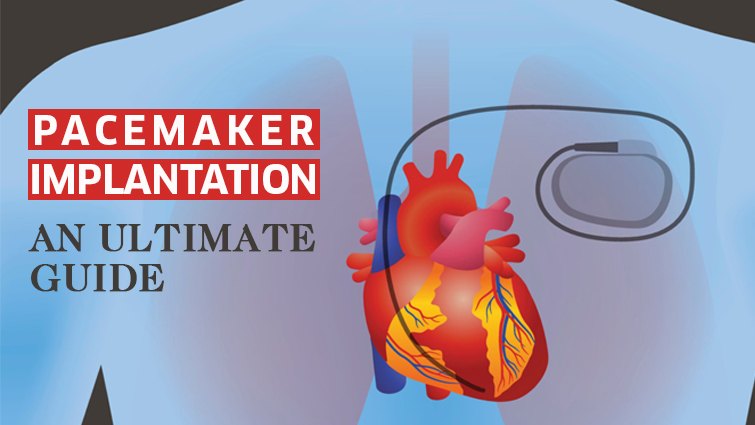 Pacemaker implantation surgery is a procedure used to implant a medical device called a pacemaker into the chest of a specific type of cardiac patients. These patients typically include individuals who suffer from arrhythmia, which is characterized by abnormal or irregular heart rate and rhythm.

For the same reason, this procedure is also known as heart pacemaker surgery. A pacemaker works by directly regulating the beating of the heart, and thus maintaining a normal heart rhythm and heart rate. This is achieved with the help of the two components that work in coordination with each other – the pulse generator and electrical leads.

A pulse generator contains a battery and the electronic system that helps control the heartbeat. It is attached to one or more leads that send electrical signals to the heart muscles and control their functioning. The leads, thus, connect the pulse generator to the cardiac muscles.

This article delves into the details of pacemaker implantation surgery, its types, procedure, risks, and cost. It also examines some of the common questions that patients typically have about heart pacemaker surgery.

A heart pacemaker surgery is a common cardiac procedure performed at the best multi-specialty hospitals in India and abroad. It is estimated that more than a hundred pacemaker implantation surgeries are performed each day around the world.

A typical heart pacemaker surgery lasts for about one to two hours and is usually performed under the influence of local anaesthesia. The patient is operated upon by a cardiac surgeon in a normal operating room or a cardiac catheterization room.

Pacemaker implantation surgery is best suited for people who suffer from either one of the following two conditions:

Light-headedness, shortness of breath, fainting, and excessive fatigue are some of the symptoms that indicate that the patient may be suffering from arrhythmia. However, only a cardiac specialist is able to diagnose arrhythmias with the help of specific tests.

Before pacemaker implantation surgery, a team of cardiology specialists first check whether you are fit enough to undergo the procedure. They will conduct a few blood tests and an X-ray to determine your overall health status, in addition to a verbal inquiry about your general health and other heart-related disorders.

Also, you will be asked about any of the heart diseases that has been running in your family or any other disorders you may be suffering from. In addition, you will be asked to start exercising regularly, change eating pattern, and stop smoking to improve your rate of recovery after heart pacemaker surgery.

The pacemaker implantation surgery is carried out by an experienced cardiac surgeon, typically those who hold a great experience in working with pacemakers and specialize in the treatment of arrhythmias.

The pacemaker implantation surgery is conducted in either of the following two ways:

This is the most common and preferred type of pacemaker surgery. In this procedure, the surgeon makes an incision on the left side of the chest (just below the collarbone) and inserts the leads into a vein that leads to the heart chamber.

The movement of the leads through the veins is monitored with the help of real-time X-ray. Once the leads reached the heart, it gets lodged into the cardiac muscles.

The other end of the leads is connected to the pacemaker, which is then placed inside a pocket created by the surgeon between the chest muscles and the upper skin of the chest.

This approach typically lasts for almost 60 minutes. It may take more time if the leads are required to be placed in more than one chamber or if the surgeon is conducting another heart surgery at the same time.

This is less common and less preferred approach for heart pacemaker surgery. In fact, it is an alternative way for placing a pacemaker.

During this procedure, the leads are attached to the outer surface of the heart by making a cut in the abdomen (just below the chest). The other ends of the leads are connected to the pacemaker, which is placed in a chest pocket as same as transvenous pacemaker implantation. This procedure is conducted under the influence of general anaesthesia.

Epicardial pacemaker implantation surgery is mostly conducted in the case of children and patients who are scheduled to undergo another heart surgery at the same time.

This procedure lasts anywhere between 60 and 120 minutes. It takes longer to recover after epicardial pacemaker implantation as compared to transvenous implantation.

Meanwhile, the cardiac surgeon keeps a tab on the recovery of the patient and his or her vital signs. If needed, tests are conducted to monitor the health of the patient and confirm the correct placement of the leads and the pacemaker device.

The patient may experience some soreness at the site of abdominal incision or cut made below the collar bone and chest. The pain, discomfort, and the soreness are managed with the help of medications for a few days until it gets reduced automatically.

Patients are advised to contact the doctor immediately if they experience any pain, swelling, redness, or fluid drainage around any incision site. Let the doctor know about any sensations that you feel after pacemaker implantation surgery, and the doctor will adjust the functioning of the pacemaker accordingly.

Myth #1: Pain persists after pacemaker implantation surgery
Fact: Pain and discomfort last for just 24 to 48 hours after heart pacemaker surgery. After that, it should go away, if it doesn’t, tell your doctor immediately.

Myth #2: I will never be able to drive after pacemaker implantation surgery
Fact: You can drive normally as before after one week of the surgery. However, first make sure that you do not have any symptoms such as dizziness and fainting, go to the doctor for regular follow-ups, have a driving license, did not suffer from any recently-diagnosed heart-related ailment, drive a light vehicle.

Myth #3: I will not be able to play any sport after heart pacemaker surgery
Fact: You can play most sports after the surgery, except very energetic ones (example, squash). Most activities can be conducted without any problem. However, all of these activities must be avoided for a period of at least six weeks after the surgery.

Myth #4: My diet will be severely restricted after pacemaker implantation surgery
Fact: This is not true. There is no restriction on diet. The doctor may, however, ask you to lower your intake of salt and sugar to maintain heart health.

Myth #5: Pacemakers interfere with sexual activity
Fact: Pacemakers have no impact on your sex life, it can be as normal as before. However, make sure not to put excessive pressure on your chest.