A Rare Anomaly: Lone Tiger Spotted in Gujarat after More than 25 Years 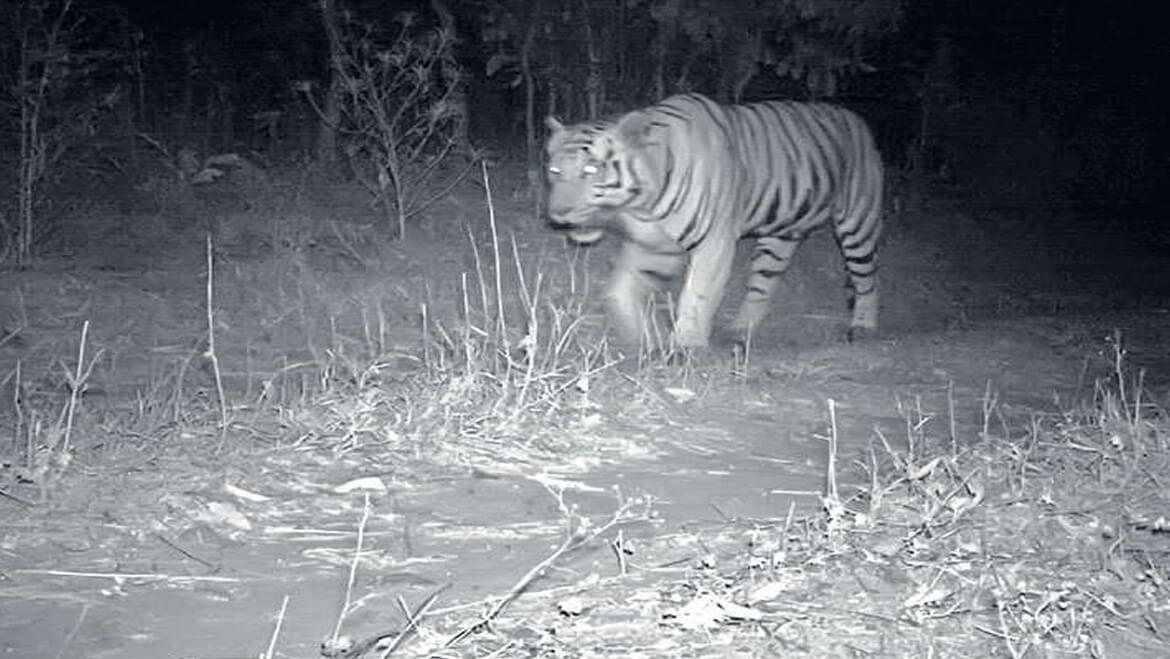 A tiger was spotted in the forests of Gujarat after it was declared extinct in the state for the past 25 years. Camera traps which were installed in the Lunawada-Santrampur forest in the northern district of Mahisagar proved the presence of the feline in the forest area. This area is around 500 km from Gir National Park.

Gir National Park & wildlife sanctuary is the only place in India where Asiatic Lions are found. Present in population more than 600, the park has, however, not been an ideal place for tigers. The last tiger was spotted in the state some 25 years ago. The tiger eventually died in an accident. This is the first time in the last 25 years that a tiger and lion are sharing a territory in the state.

The officials confirmed the sighting of a lone tiger in the Panchmahal district of Gujarat. A few days earlier, a teacher on his way to work had spotted a tiger crossing the road. He also took a photograph of the tiger, which created a lot of buzz amongst the forest officials. However, on February 12, the trap camera set up in the forest range captured the movements of the lone wandering adult tiger.

RM Parmar who is the officer in charge of the mission of finding the tiger said that the tiger is estimated to be 5-7 years old. He also told that the night vision camera also captured the presence of the tiger.

Natural habitats of lion and tigers

Tigers occupy a wide range of habitats from the dense tropical forests, woodlands, evergreen forests, grasslands, mangrove swamps, rocky country. They are nocturnal and they attack in stealth and rely on their camouflage to win over their predator. Tiger needs a big territory and although they are social, they might also prefer to hunt alone.

Lions are mostly found in sub-Saharan deserts of Africa and Gir in Gujarat is another place where Lions are found. Although abundant throughout Western India during the start of the 20th century, Asiatic Lions are only found in Gir today. They prefer dry conditions.

Co-existence of tiger and lion a possibility?

Until the end of 19th century, lions and tigers were believed to have co-existed together in the parts of Western and Central Asia and in India. There have been records of lions and Caspian tigers existing in Iraq and in Transcaucasia but they had different habitats. In India, Bengal tigers and Asiatic lions co-existed but in different habitats. Although, it is believed that in the past, lions and tigers have co-existed together in the same habitat, however, there has been no such sightings.

History of tigers in Gujarat

The state which is home to the only surviving population of Asiatic lions also had tigers. Having different habitats, tigers roamed the jungles of Gujarat. However, their population was declared extinct in the state following multiple cases of poaching in the late 20th century.

However, in recent years, NTCA (National Tiger Conservation Authority) and Forest officials have been conducting a census to determine the tiger population in the state. Gir had no prior tigers for the past 3 decades. The census showed the negative possibility of tigers in the state but the authorities decided to conduct the census in the areas surrounding Gir National Park to rest the debate of tiger presence in the state.

Why are there no tigers in the state?

A question which followed the news of tiger sighting in Gujarat was that why are there no tigers in the state? The major reason for the absence of the big cats in the state is the unfavourable habitat. While tigers prefer greenery over dry areas, Gir National Park in Gujarat isn’t best suited to them. Poaching in the 20th century also played a major role in the declining population of the feline in the state.

However, the sighting of the lone tiger in Gujarat has given hope to conservationists and forest officials, who have been searching for tiger presence in the state for the past year. All of us hope that the tiger is tracked and monitored and this acts as the start of the future possibility of coexistence.