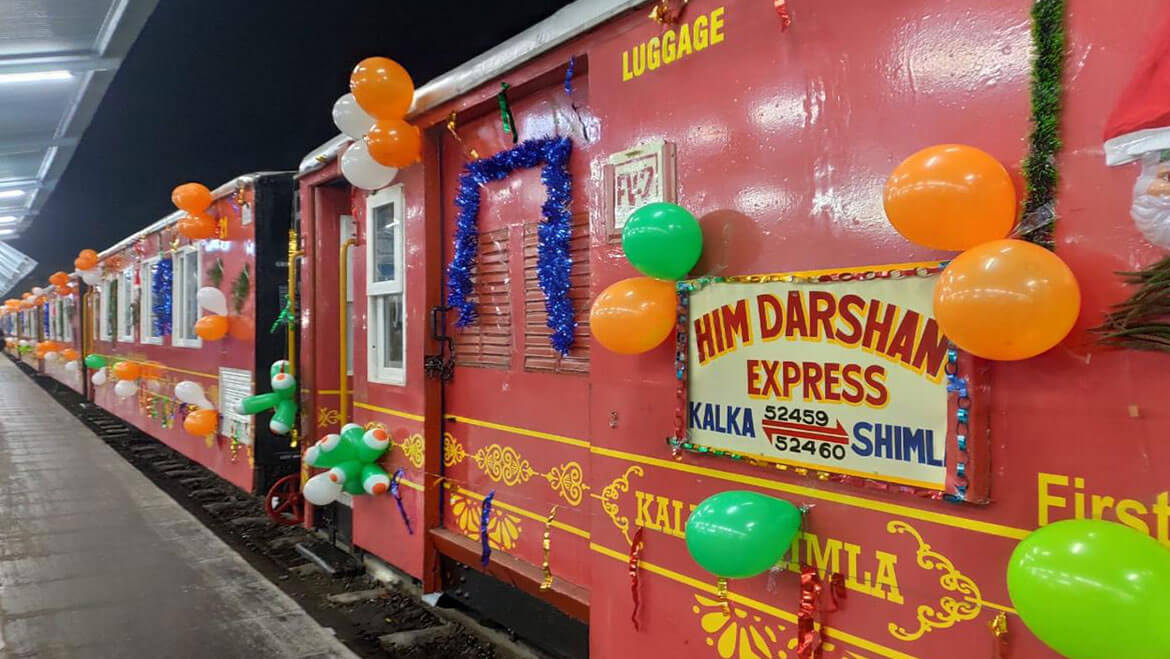 Shimla has never failed to charm the tourists, especially during the winter season. To this, the Indian Railways on 18 December 2019 has added cherry on top by introducing the ‘Him Darshan Express’ tourist special train on the UNESCO Heritage Kalka-Shimla route. The train comprises 7 coaches including six first-class AC vista dome coaches and one first-class sitting cum luggage room coach. Earlier this year, the Railways has put only one see-through vistadome coach, but in view of the huge response from the travellers coming to explore Himachal Pradesh, the entire tourist train has vistadome coaches to offer travellers a panoramic view of the hills and surrounding villages.

4 Nights / 5 Days Shimla and Around Tour

Everything You Need to Know about Him Darshan Express 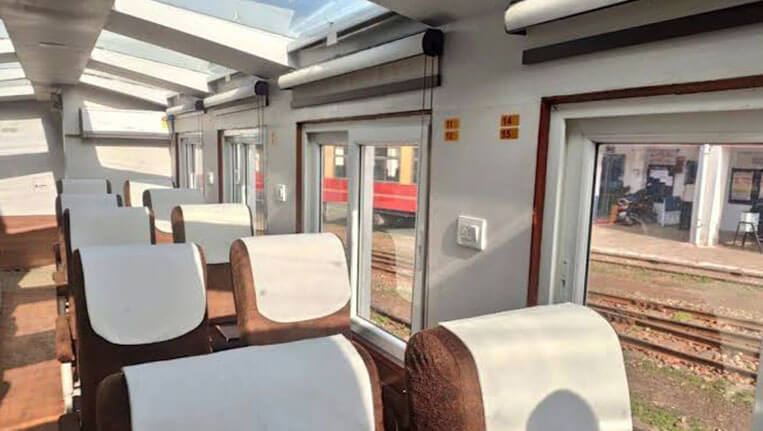 Him Darshan Express is the first train introduced by Indian Railways comprising all vistadome coaches to run on a regular basis and holds a capacity of over 100 passengers. The interiors of the coaches are tastefully decorated and offer the travellers an opportunity to be close to nature.

In regard to this, the Divisional Railway Manager, Gurinder Mohan Singh said that the initiative was taken keeping in mind the tourists. Each vistadome coach has 15 seats with five-window seats at both sides and the rest five will be aisle seats. Each coach has two air conditioners and is aesthetically designed with a glass roof, wider see-through windows. Not just this, but window roller blinds and honeycomb blinds for roof glass is also provided to avoid heavy light during the summer months. Adding to this, the interesting fact of the train is, the vistadome coaches are tastefully decorated with plush interiors and offer the travellers a chance to be close to nature.

What are the Amenities Provided in the Train?

According to sources, the seats in all the coaches are adjustable to enhance the overall travel experience of sightseeing from inside the train. The coaches are modernized and sufficiently equipped with things like modular type switches and sockets for LED lightings and charging, provision of lavatory and more.

The Fare and Train Departure Timings

The ticket price of Him Darshan Express is INR 630 per passenger (one way) irrespective of age. Tourists visiting Shimla can board the train from Kalka station at 7:00 am in the morning that will reach Shimla by 12:55 pm. In return, the train from Shimla departs at 3:50 pm and reaches Kalka by 9:15 pm. En-route the train stops at Barog station in both directions.

How to Make a Reservation?

You can book the tickets for Him Darshan Express via Passenger Reservation System (PRS). Besides, other online booking modes are also available.

Lucknow-Delhi Tejas Express, Know All About its Interesting Features & How to Book

Right after the first Anglo-Gurkha war, Shimla, (earlier called as Simla) was established by the British. And it was in the year 1864, Shimla became the summer capital of the British Empire. Not just this, but the hill station even served as the British army’s headquarters. The only snag during that time was the connectivity to reach Shimla from Calcutta (now called Kolkata). The mode of transportation was horses and ox-drawn carts that traversed the mountain terrains that unsteady, dangerous and took a long-long amount of time.

So, it was in the year 1903 when Kalka-Shimla narrow gauge was started for easy and quick access to Shimla which was referred to as the ‘British Jewel of the Orient’ for easy and quick access to Shimla. The maiden toy train journey on the Kalka-Shimla was taken by the then Viceroy of India, Lord Curzon and since then, the train has been operating regularly and has become an iconic symbol of Shimla and one of the attractions of Himachal tourism cherished by both locals as well as tourists.

Other Trains and Their Timings 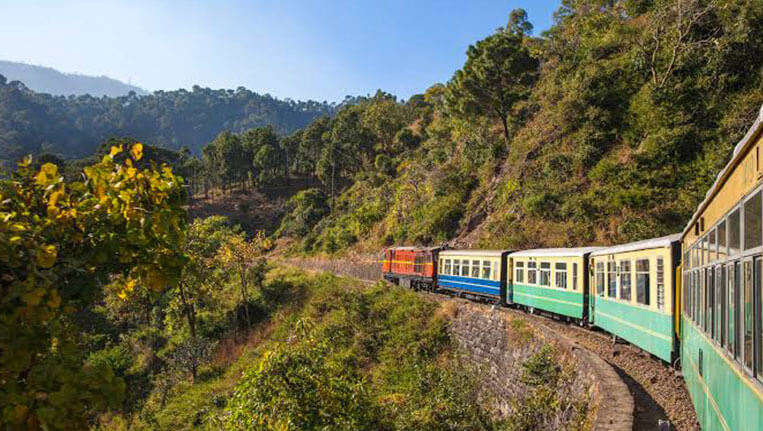 There are other trains available for those looking for travelling on the Kalka-Shimla Railway route. The train booking can either be done at a railway station counter or via PRS.

From Kalka to Shimla

From Shimla to Kalka

Embark on a Spiritual Journey with Buddhist Circuit Tourist Train

Q. What is Vistadome Coach?

Vistadome train coaches are glass-enclosed which means there are glass roofs and wide see-through windows offering the passengers panoramic views of the surrounding areas.

Q. Who is operating Him Darshan Tourist Train?

Him Darshan Tourist Train is operated by the Indian Railways.

Q. What is the seating capacity of this train?

Him Darshan Express has a seating capacity of over 100 passengers.

Q. What are the main amenities/features of this train?

Him Darshan Express is tastefully designed with top-notch amenities/features offering a wonderful travel experience throughout the journey. Each coach has two air conditioners and the seats are adjustable as per the convenience. Modular type switches and sockets for LED lightings and charging are provided. Not just this, but the coach has also been modernised in terms of provision of the lavatory with water jet, liquid soap, odour freshener container and a lot more.

Q. How many stations/destinations are being covered by this train?

The Him Darshan Express tourist train halts at Barog during to and fro journey.

Q. How much distance is covered by Him Darshan Express tourist train?

Him Darshan Express tourist covers a distance of around 94 km with 1 halt at Barog.

Q. What are the other trains for travelling on the Kalka-Shimla Railway route?

The other trains for travelling on the Kalka-Shimla Railway route are The Rail Motor, The Shivalik Deluxe Express, and The Himalayan Queen.

Q. What is the fare of Him Darshan Express train?

The ticket price of Him Darshan Express tourist train is INR 630 per person (one way) irrespective of age.

Q. How can I book my tickets for Him Darshan Express?

You can book your tickets for Him Darshan Express either via Passenger Reservation System (PRS) or other online booking modes.