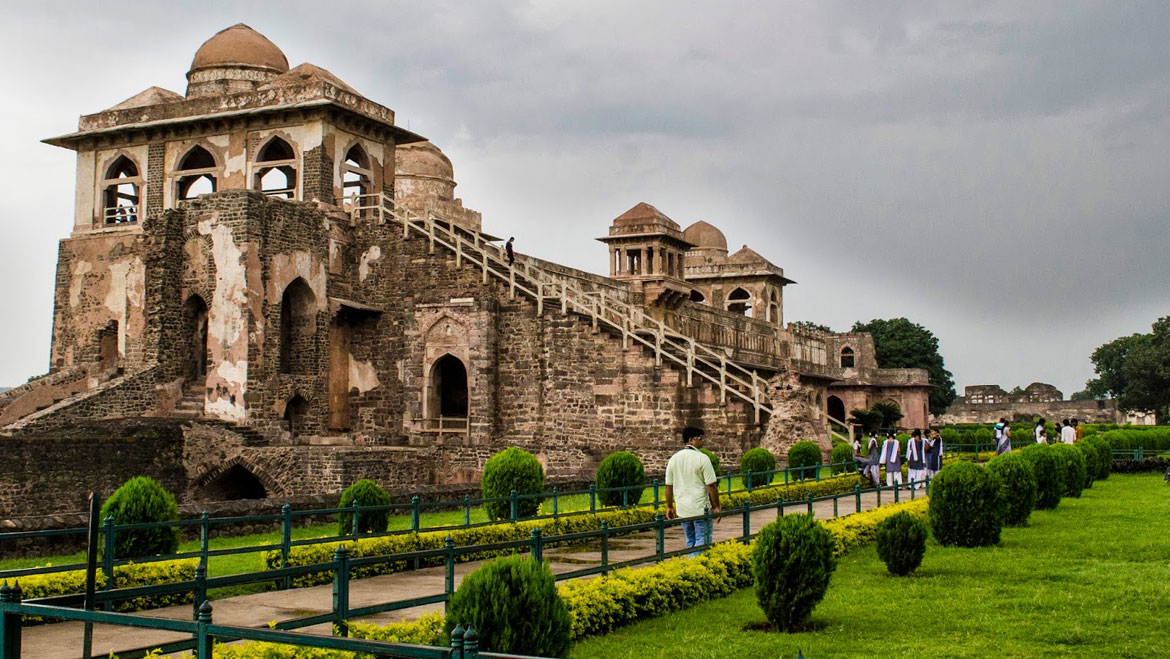 You must have explored many wonders of Delhi such as forts, lakes, markets, and minarets but the city has more to offer to those who continuously seek to unveil one of its hidden gems. And believe me there is still plenty that Delhi has to offer, and even though these jewels of the city were not able to get the same attention from the explorers, let me assure you they certainly deserve a mention and at least a visit someday. Here are some of the best-hidden gems and nondescript places to visit when in Delhi. 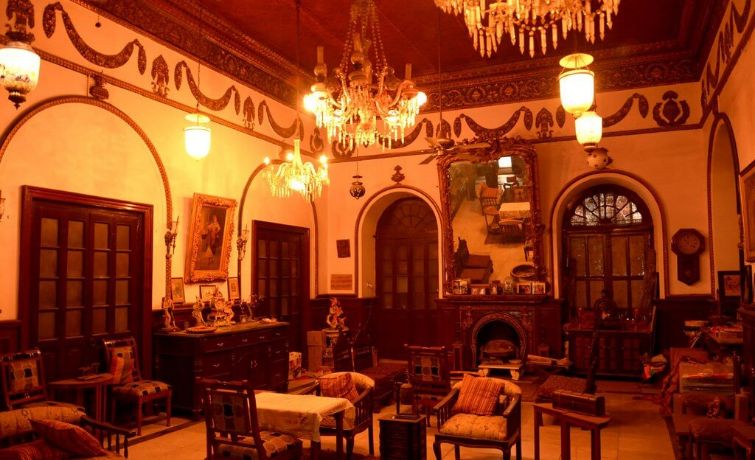 Touring around Old Delhi may make you feel like you are in a different world. Trust me; it makes the locals living in New Delhi feel the same. The place has a stuffed-up ambiance but it also holds some famous Havelis in Delhi. One well-known hidden gem that dates back to 1848 is Chunnamal Haveli. This Haveli truly preserves the heritage of the olden times; you will know what I mean when you visit it yourself. Chunnamal Haveli was home to one of the wealthiest men in Delhi, Lala Chunnamal. The Haveli’s chandeliers and old portraits, as well as antique pieces of furniture, will give the feel of royalty. However, today it is filled with 132 commercial shops while the upper floors can give the glimpse of the remains of the Haveli. And you may also see the 8th generation of the Chunnamal family still living and preserving the three-storied mansion. It is also known as Lala Chunnamal ki Haveli and it is located in the congested area of Chandni Chowk. 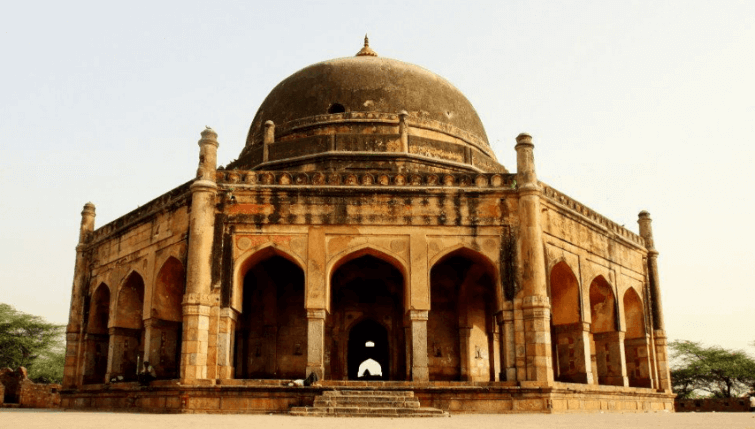 This lesser known gem has a glorious past. Adham Tomb also known as Bhool Bhulaiya is located right behind the Qutub Minar in the Lal Kot stretch of Sanjay Van. This monument was built in 1562 AD after the death of Adam Khan. Its domed octagonal structure has a veranda with three openings on each side. However, there is a myth behind the monument, it is said that once the entire Baraat went missing who took refuge in the tomb. Despite the fact that it is not very big where people would vanish, but being around the vicinity of Sanjay Van may explain few things as it is a noted area said to be haunted. However, one can find peace and calmness here. Nevertheless, you may find few homeless people staying here but it is worth a visit to catch a beautiful view of the neighbouring Qutub Minar from a different angle. 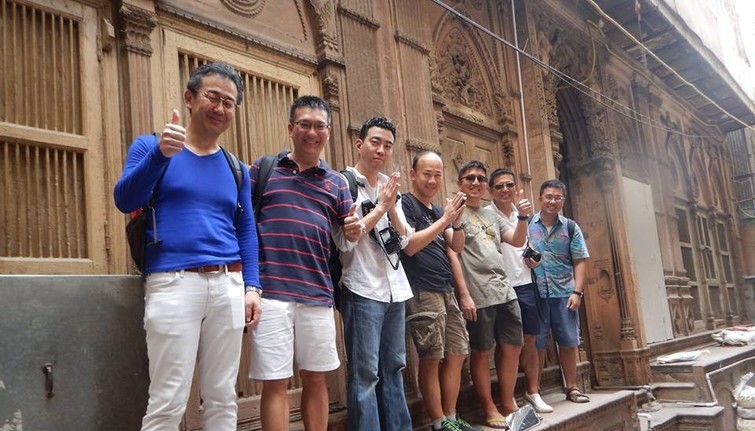 In a place that is packed like tin can filled with sardines, this Haveli sits deep inside the Sitaram Bazaar. Home to the Gupta family, this Haveli was inherited by late Ram Kishan Gupta from his mother. You must be wondering why is the Haveli given the name Master Ji? Well, it so happens that, Ram Kishan Gupta was a great Sanskrit scholar and was awarded the State Award for his noble service in the field of education. Thus, his popularity gave the name to the Haveli. As soon as you creep your way from the bustling alley of the market, towards your left you can see the entrance to the Haveli. Its carvings on the front door are worth appreciating, in fact the entire building is build in Mughal architecture. Inside the Haveli is a different charm, its antique pieces of furniture dotted with plants around every corner creates a soothing ambience. Today, the Haveli is looked after by the current generation of the Gupta family and you can visit this by taking up a tour designed and guided by Dhruv Gupta himself. This tour gives an opportunity for the on-lookers to explore the culture, cuisine and heritage of Old Delhi.

Occupying an area in the crowded by lanes of Ballimaran, Hakim Ajmal Khan’s Haveli is a good place to visit. This Haveli was home to a famous physician, Hakim Ajmal Khan who was widely known for his traditional Unani (Greek) medicines. His contribution earned him several titles from the British Government. He was also the noted individual who founded the famous Jamia Millia Islamia University in 1920. Hakim Ajmal Khan was also involved in the freedom struggle. He participated in several freedom movements and soon the first floor of his Haveli became a hall for conducting meetings of Indian freedom fighters which also included Mahatma Gandhi. Today, this significant old building that is blessed with its glorious past is looked after by Hakim Ajmal Khan’s great grandnephew. Hakim Ajmal Khan’s Haveli still preserves the old world charm with old portraits, antique furniture’s and a Hookah from the Mughal times. 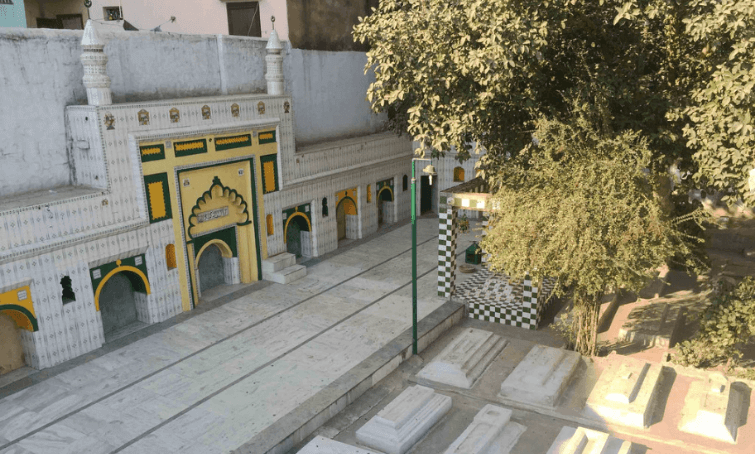 In the middle of the chaotic bazaar in Mehurali, this quiet and solitary attraction certainly reflects how the eunuchs were socially accepted during the Lodi era. Despite the fact that, hijras are often neglected today, there was a time when they were highly regarded important. Hijron ka Khanqah is a well-maintained grave for the eunuchs or hijras. The place offers a calm ambience and it is almost always empty. It is entered through an iron grill consisting of six stairs. As you escalate you can see around 50 whitewashed tombs in the courtyard. This Khanqah has 49 tombs and the one covered by a roof is said to be the sister of a man simply known as Sheikh Baba. The place creates a peaceful environ, despite being loud and noisy outside, it is silent inside the Khanqah. 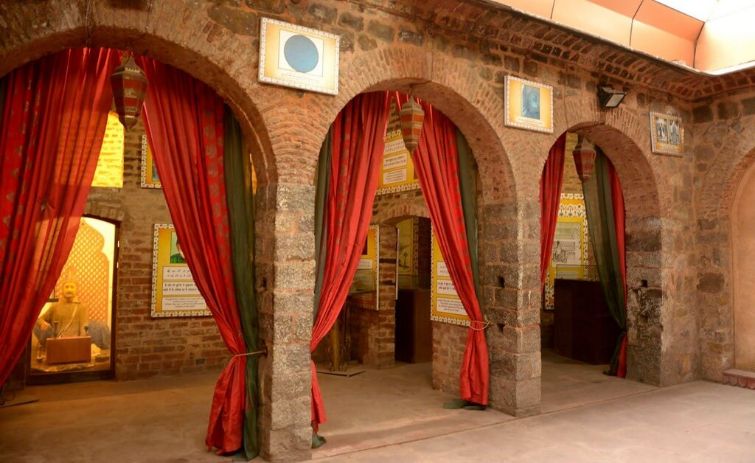 As you walk down the narrow lanes of Qasim Jaan you will come across Ghalib ki Haveli. This heritage building is a famous place that sits quitely amidst the vibrating Chandni Chowk. The Haveli is home to Mirza Asadullah Baig Khan who was a well-known urdu and Persian poet. You can take a glimpse into the Haveli that helped Mirza Khan break some of the most beautiful poems such as Hazaaron Khwahishen Aisi which translates to ‘A Thousand Desires Such.’ Some of his belongings you can see here are his handwritten ghazals, his selected books and couplets along with some of his photographs. Ghalib ki Haveli is a must visit place to track down the history of the famous poet in India and to witness the richness of Indian history. 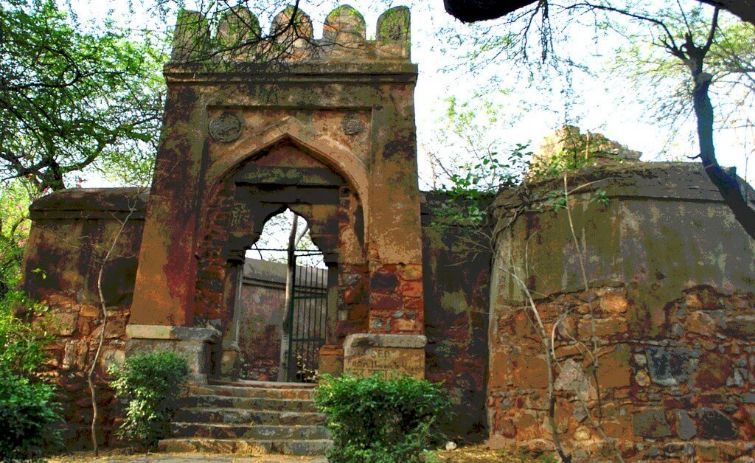 Some say it to be haunted while some call it a myth, maybe we will never know unless we explore it. This hidden attraction that has been calling all photographers for photo-tours and leisure day out is Bhuli Bhatiyari ka Mahal. This place is located in the central ridge that yore the past. Bhuli Bhatiyari ka Mahal was actually built as a hunting lodge by Firoz Shah Tughlaq back in the 14th century. Speaking of the architectural design, it highly resembles the design of well-known Malcha Mahal in same area. Its rubble masonry gate and huge open courtyard takes you back to bygone times. The fact that there are no guards to watch over the place at night and those who have visited this place warn others to leave the surrounding area before sunset make Bhuli Bhatiyari ka Mahal even more attractive and interesting.

19 Must See Heritage Sites of Delhi 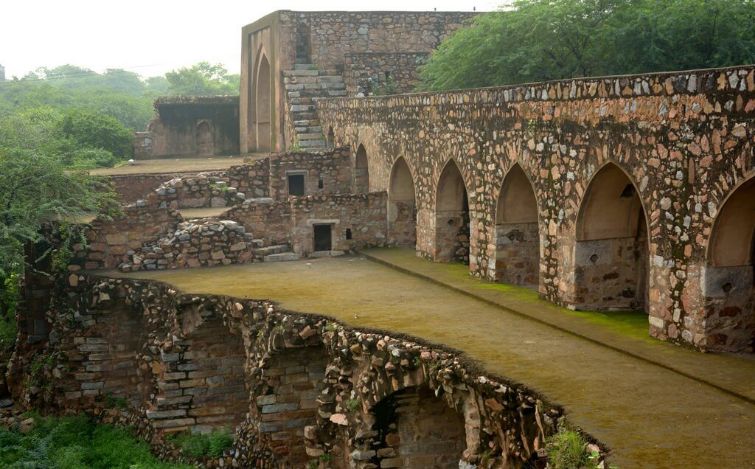 This attraction in Delhi is pretty much overlooked and is often passed by people without being noticing. Satpula Bridge located in the posh locale of Saket is a medieval structure. You will find peace and serenity here, away from the South Delhi scenes. Satpula or seven bridges was erected in 1343 AD by Sultan Muhammad Bin Tughlaq of Tughlaq Dynasty over a Yamuna River fed stream. You can see the seven arches aligned with water tunnels placed below although they have been long damaged. This two-storey high structure hosts a soothing and green area perfect to relax and see a completely different side of Delhi. 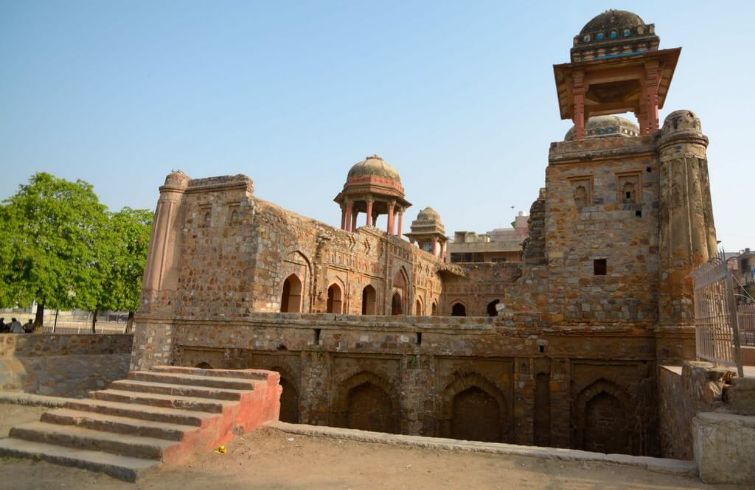 One such lost charm in the middle of the bustling Mehurali market area is the Jahaz Mahal. This place may not be as attractive due to its low maintenance but it can certainly give you the look of a ship. This Mahal was built during the Lodi era and it is believed to serve as a pleasure retreat. However, some believe it was a Sarai (Inn) for guests visiting the place. Jahaz Mahal is an interesting and calming place to visit if you want to escape from the monotonous crowded attractions. The best part is, this attraction located nearby Qutab Minar and you can even go for a photography session around Sanjay Van and Qila Lal Kot. It is a perfect place to make a day out of it. 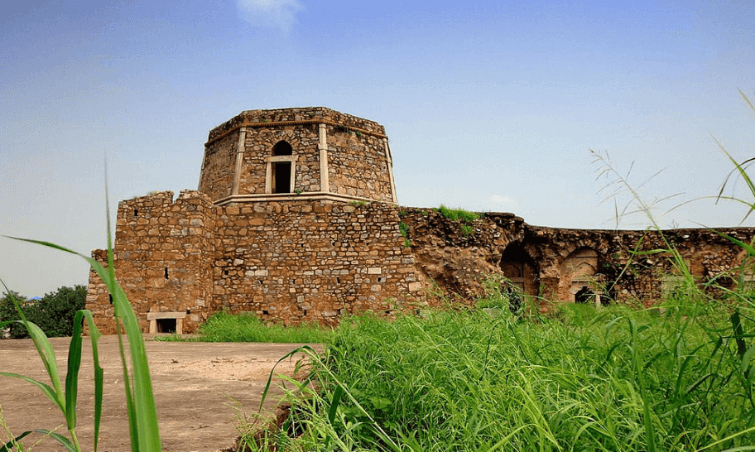 This rustic structure, Bijay Mandal is known for its unique architectural design. This Mandal is also known as Qasr-i-Hazaar Sutoon and though it is an old treasure amidst historical Delhi, it still stands tall. Bijay Mandal was built in the 14th Century and it was supposed to be a palace of the emperor. The entire architecture of Bijay Mandal is positioned on a raised platform mounted by another higher platform. Located below is a small octagonal shaped pavilion that offers a great view of the city. Around the monument, you will also find a shrine of Sufi Saint known as Sheikh Hasan Tahir that is accompanied by several other graves encompassing the Bijay Mandal.

It is inevitable that you will be charmed by Delhi’s many attractiveness. And amongst some well-known gems, it is always nice to get a glimpse of some of these hidden gems as well. Delhi is blessed with a plethora of history and monuments and no doubt you will have a lot of endless excursions during your Delhi tours. If you like this blog please give it a thumbs up and share with your friends who want to explore every nook and corner of Delhi.