As I didn’t want to indulge into river rafting and camping on my trip to Rishikesh, I noted down the places that I wanted to visit to make most of my time in this popular destination in Uttarakhand. Amongst them, the one that remained at the top of the list was ‘Beatles Ashram.’ It so happened that a week before planning the trip, while browsing the internet for the tourist attractions in Rishikesh something in my heart said, “Don’t leave Rishikesh without witnessing the Beatles Ashram.”

Since good things don’t come easy, I had to walk for about 3-4 km from Lakshman Jhula crossing the Ram Jhula, Gita Bhawan, and Parmarth Niketan Ashram to reach the Beatles Ashram as public transport is not allowed on this trail. But walking to the Ashram is worth as on your way you will relish the beauty that is no less than a treat to the eyes and soul. 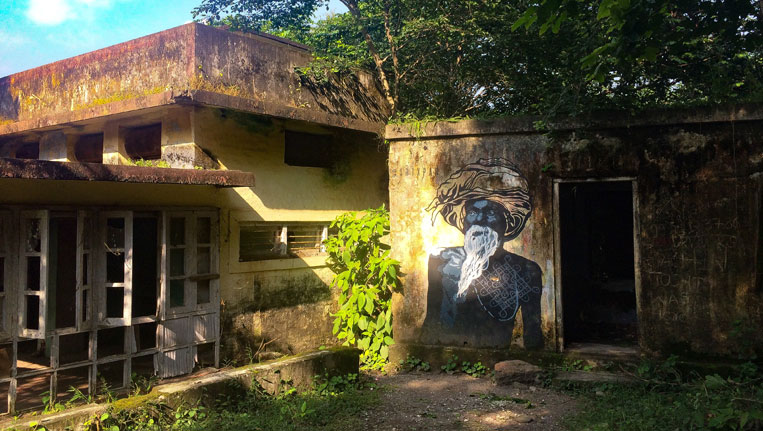 The reason why the Ashram is named such is because of the Beatles who met Maharishi Mahesh Yogi (Spiritual Guru and the founder of the Ashram) in London in the year 1967, got attracted to his teachings. A year later they came to Rishikesh to visit him, live and learn Transcendental Meditation. And it was during that period that the Ashram and Rishikesh got too much world’s coverage. Though the Beatles in India stayed for a short period of time, they were really productive in performing in the Ashram. 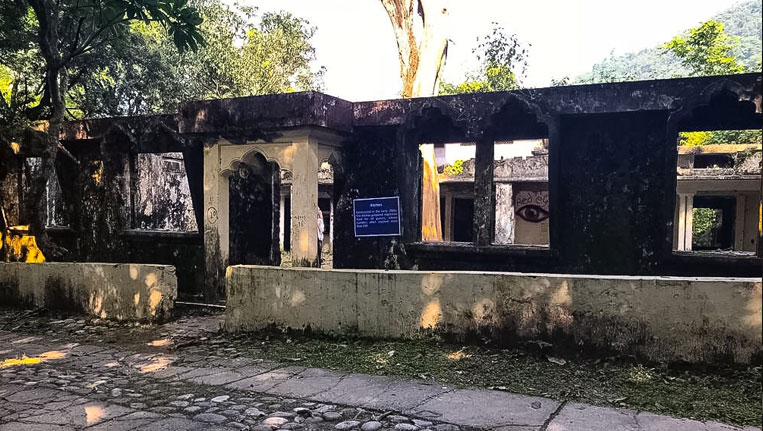 Finally, after a long walk, I reached Beatles Ashram which is also known as the Swarg Ashram and Maharishi Mahesh Yogi Ashram managed by the Rajaji Tiger Reserve. After buying the ticket, I received a leaflet where information and trail to be followed to the Ashram was written making it easier for the tourists to explore. As I moved inside, a frisson of excitement ran through me and that’s when I noticed a natural trail on the left side which one can take to enjoy natural beauty. So instead of hiking straight to the campus, I took the natural trail route and walking on it and reached the ruins of a building where a board read – Kitchen Area. The board also said the kitchen once fed as many as 500 residents of the Ashram.

Ved Bhawan: For The Love Of The Iconic Band “Beatles” From Liverpool 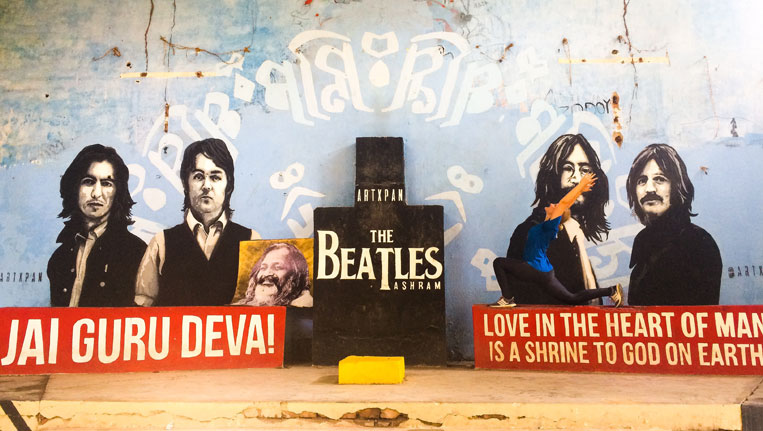 Walking ahead, I came across a path which has small bungalows on the other side that were cladded by moss but I didn’t make a visit inside all of them. And finally, I reached the most awaited building- Ved Bhawan also known as Beatles Cathedral. If you are a true Beatles fan, then the place would offer you a totally different feeling and you won’t have the desire to leave the place. Entering the hall, you would see the picture of John Lennon, Paul McCartney, George Harrison and Ringo Starr on the right side. Not just this, but what consumed my attention in the entire hall was the humongous number of graffiti and drawings. Also, at the center stage, there is a place where Maharishi Mahesh (Gurudev) used to seat.

Chaurasi Kutia: One With 84 Meditation Chambers 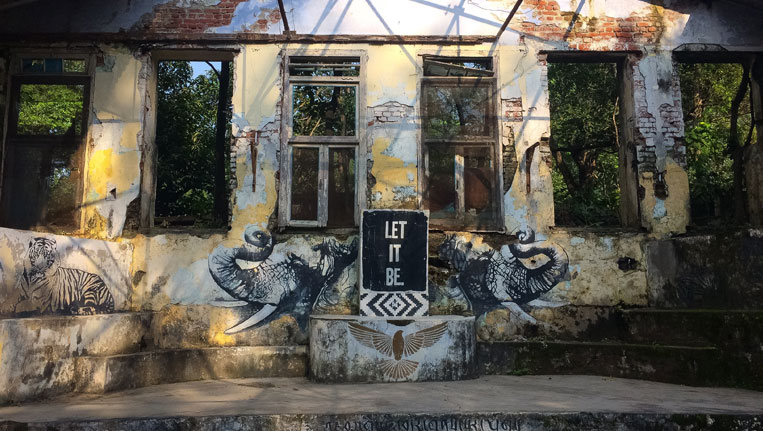 Walking towards the back end of the Ashram comes a structure similar to a hostel which is called ‘Chaurasi Kutia Ashram’. It is named such because it has around 84 meditation chambers. These chambers are built with the local river stones which appear to be beautiful. Other than this, as I got closer, I saw double story ‘Kutiyas’ with a small basic staircase joining the two levels. Reaching the point, I was wondering how soothing it would be to sit there with closed eyes and listening only to the forest sounds, the chirping of birds or the sound of the cool breeze.

Exploring the Chaurasi Kutiya, on my right I came across a Printing Press where the first copies of the famous books of Maharishi Mahesh Yogi and his commentaries on Srimad Bhagavatam were first printed. Looking at some of the shelved cupboards in the ruins, Beatles Ashram (popular Ashram in Rishikesh) gave me an opportunity to relive the past. Little ahead, there is Panchkuti which was a set of guest houses meant for international guests and dignitaries. 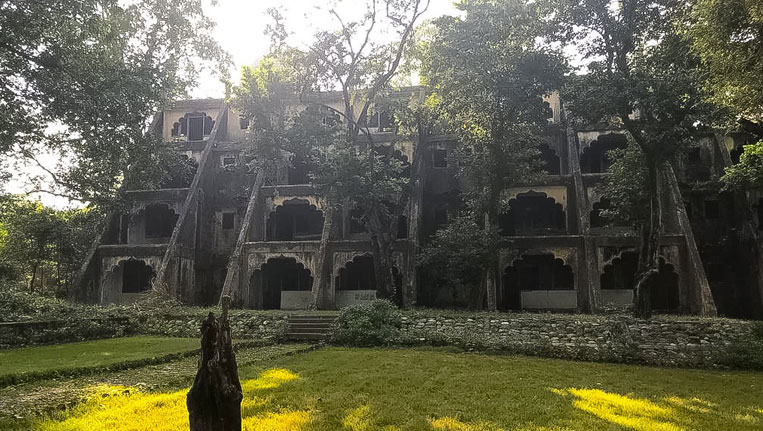 As I was walking by, I came across Anand Bhavan & Siddhi Bhavan which are the biggest buildings on the campus. The place was the residential quarters for those training to be teachers or taking advanced courses. What kept me gazing at the building was the slanting pyramidal walls that were really intriguing. I must say there was something mystical about this unusual shaped building which you need to experience by yourself. Stepping inside the building I was kind of lost in the maze of rooms. Appearing to be a little haunted I did not dare to step on the upper floors. What I found mysterious about this building was the writings on the walls that were weird yet interesting.

Getting down the slopes towards the entrance came in sight small huts, probably used for living and meditating with a river side view… so cool that I kept gazing at them. The tranquillity of the place truly lets the visitor overcome all the doubts, it indeed looks like a place that could help one discover himself. The Beatles Ashram which is popular as the best place for meditation in Rishikesh was cladded with mellow harmony and finest drops of mists. Perhaps this makes the environment of the ashram a positive one. Truly the place has some magic that left me speechless but I just wanted to be there forever. 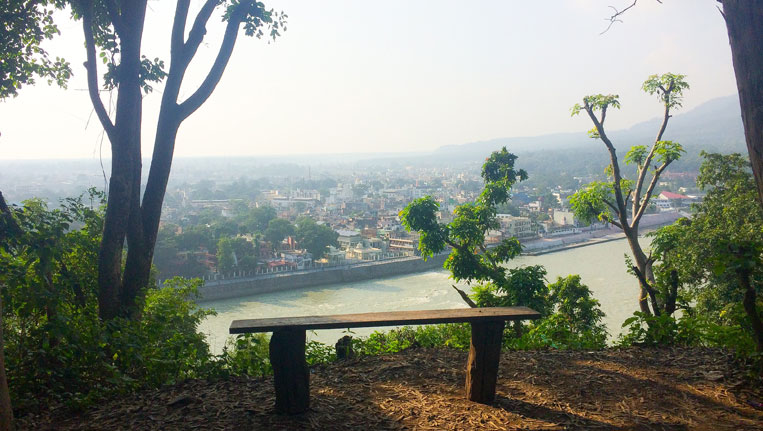 Exploration Time: Min 30 mins to 1 hour (If I talk about myself, a full day was enough for me though).

Best Time to Visit: Being one of the top tourist attractions in Uttarakhand, the ashram can be visited throughout the year. But consider planning your trip between October and April.

Other Popular Tourist attractions in Rishikesh 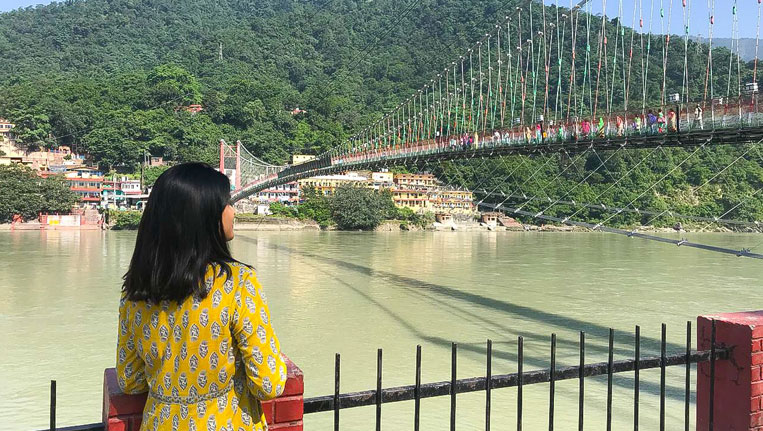 So that’s all about my experience in the Beatles Ashram. The place has left its charming expression on me and this is the reason why I would urge you to pay a visit to the Beatles Ashram whenever you plan a trip to Rishikesh.  Happy Travelling!