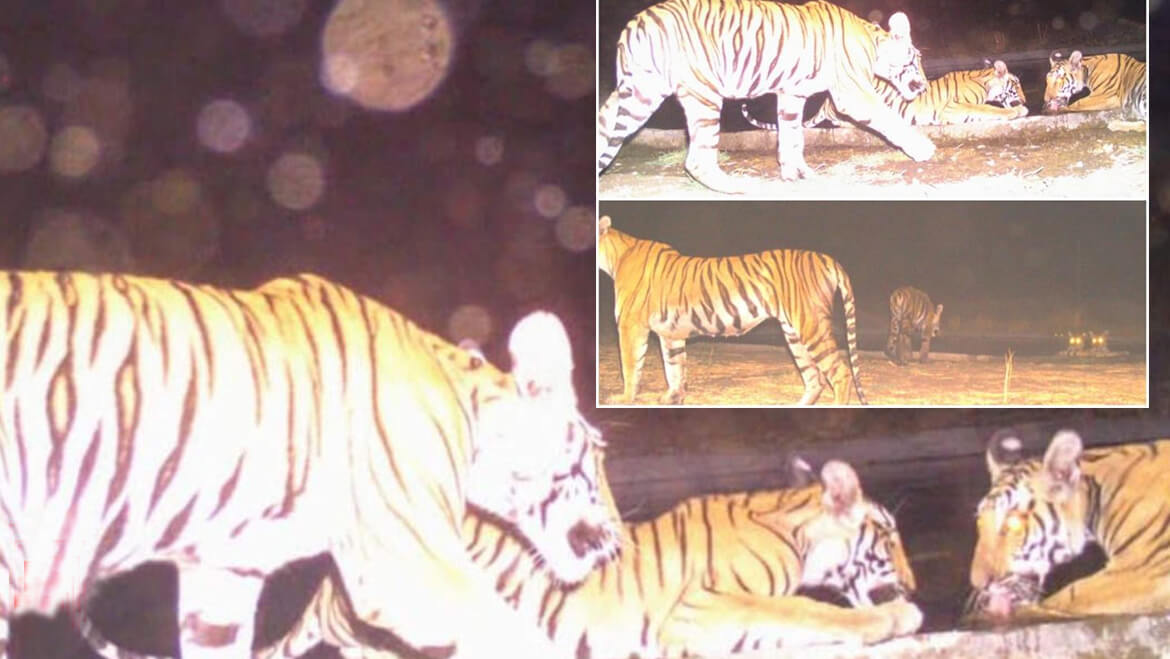 With a vast population of tigers existing in the wild today, India is one of the best places to spot these majestic creatures in their natural habitat. Of all the wildlife destinations in India, Madhya Pradesh remains at the top when it comes to tiger spotting in the country. In regards to this, five tigers have been spotted for the first time in Kheoni Wildlife Sanctuary in Dewas District of Madhya Pradesh as said by Divisional Forest Officer (DFO) PN Mishra on June 24, 2019. Night-vision camera set up in the wildlife sanctuary traps the streak of tigers comprising a tiger, two tigresses and two cubs (around one and a half-year-old) drinking water near a waterhole in the sanctuary.

India is a home to around 70% of the world’s tiger population which makes it easier for tourists to catch a glimpse of these beautiful creatures. But as per ENVIS (Environment Information System), the primary fauna found in Kheoni Wildlife Sanctuary are the blue bull, four-horned antelope, wild boar, cheetah, sambhar, barking deer, wolf and more. So, spotting five tigers for the first is no less than a surprise for the forest officials as well as the tiger lovers. Even though the cubs have been sighted in the past but the presence of these five feline together indicates that they are residents wild cats.

The Further Steps Taken by the Forest Officials

It is believed that due to abundant food and water, the tigers thrived in the sanctuary. The forest officials have decided to make elaborate arrangements to create more waterholes at strategic locations. Doing so might grab the attention of the tigers which will be a win-win point for both the authorities in charge and tiger lovers. The forest department is also planning to train the staff members on managing the tigers from the Satpura Tiger Reserve.

Also, with the recent tiger spotting, the forest department is planning to call for a meeting involving Dewas district administration and police for the conservation of these wild cats.

Located in the Kannod Tehsil of Dewas district of Madhya Pradesh, Kheoni Wildlife Sanctuary was established in the year 1955 and spreads over an area if 132 sq. km. Being one of the wildlife sanctuaries in Madhya Pradesh, Kheoni is home to leopards along with many other carnivorous animals. The dominant herbivores species like chinkara, nilgai sambar, palm civet and more are also found but rarely sighted. In addition to this, the wildlife sanctuary gives an opportunity to the bird watchers to spot approx 125 bird species including Indian Paradise Flycatcher, the state bird of Madhya Pradesh.

What to Do on a Family Holiday in Madhya Pradesh

The Natural Habitat of the Majestic Tigers

Coming to the natural habitat of these big cats, they occupy a wide range from the woodlands, dense tropical forests, mangrove swamps, evergreen forests rocky country. They are nocturnal and attack stealthily. The other interesting fact about tigers is, even though they look for big territory and are social, but they mostly prefer to hunt alone.