Dreamy Destinations in Rural Uttarakhand for Shooting a Film 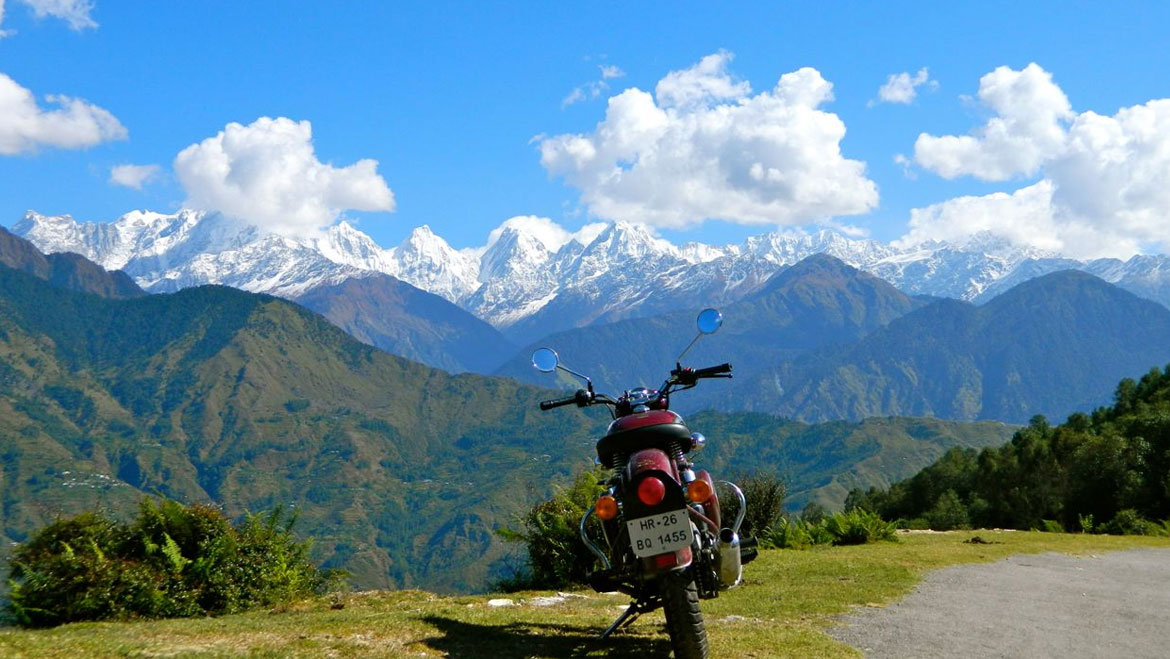 Glad to realize that the trend in Bollywood films is changing; the contemporary directors are more aware of the indigenous resources and thank god now for every other romantic song they aren’t running to Switzerland anymore. The recent Bolly flicks have also some real travel goals to persuade those living a monotonous life, and as a traveller myself, I feel inspired to go out there and live my life to the fullest. The best part about the contemporary movies is the choice of locations, to which the native audience can feel connected to; the valleys of Kashmir and Ladakh, the beaut Himachal Pradesh and also the surreal Uttarakhand can all be seen in a movie now. Talking about Uttarakhand, I really think there are dreamy settings that can be perfect for a film shoot, yes, you haven’t seen the state’s most beautiful part as of yet. But, it is time that these gorgeous remote places in Uttarakhand get the much-deserved attention, so here I am walking you down a list of 10 best places in the state for a film shoot. 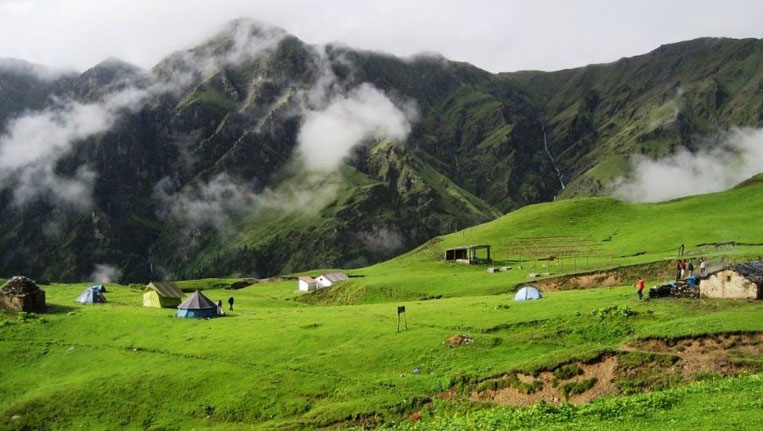 Don’t be mistaken, even though I’ve mentioned the two meadows (Bugyal) together, they are not situated close to each other, and yes, it is painstaking (wanted to write something else) to get to each of these. But like they say, no pain, no gain. If there was ever a contest (official) of which is the most beautiful place in Uttarakhand, then Bedni and Dayara would definitely be in top three, hence, I am suggesting these as the top remote places in Uttarakhand for a film shoot.

Bedni Bugyal falls en route the famous Roopkund trek, near the Wan Village in Chamoli District of Garhwal Himalayas. This alpine meadow is situated at a height of 3354 m and is nothing less than a dream. It’s like miles and miles of lush green grass surrounded by the sky-kissing mountains, often snow-clad. Bedni is indeed a perfect location for that cliched Bollywood love song, however, it can also be one of Imtiaz Ali’s signature locations where the hero and the heroine escape to and realize that life is too short to have regrets.

Dayara Bugyal, on the other, sits at 3048 m in the Uttarkashi District in Garhwal region of Uttarakhand. This high-altitude meadow can be trekked from Barsu and is another pristine meadow that makes for a perfect film shoot location in Uttarakhand. Unlike Bedni, Dayara is easier to trek and you’d have a ball camping here. The meadow again is perfect for that Bollywood style travelling song or a romantic one where the female actor gets to flaunt her chiffon saree. I know, I know, it sounds old school, but hey, we loved those cheesy songs once.

Know About Popular Meadows to Explore in Uttarakhand 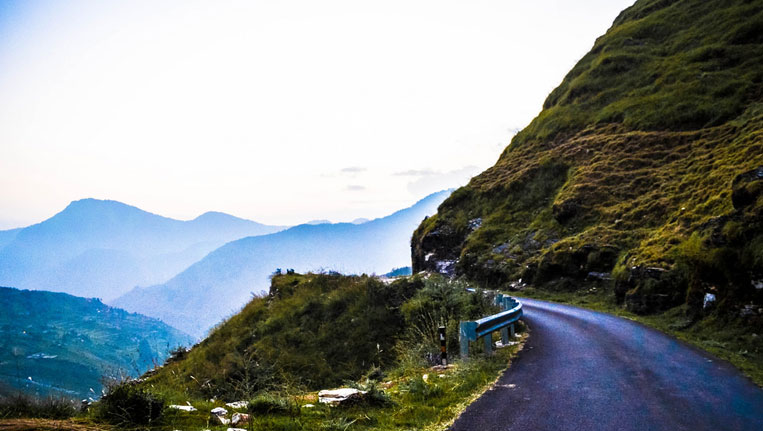 Some odd 10-hours from Kathgodam, Munsiyari, and Chaukori in the Kumaon hills invite you for a visual treat. Offering the panoramic view of the Panchachuli peaks, the two destinations make for a great backdrop of a travel film.

Chaukori which is some 90 km away from Munsiyari, is a tiny hamlet in Pithoragarh District of Kumaon region in Uttarakhand. Apart from the glorious view of the Panchachuli, the village also opens to a thick woodland, which again can be a nice location for shooting a film. Chaukori boasts quite scenic sunrise and sunset, which can be great for those cutaway shots, maybe.

Munsiyari is tucked away in the beaut Pithoragarh District, and it has to be one of the most picturesque places in the Kumaon region. The small village with the background of the lofty and rolling Himalayas is so dreamy that you may just want to buy yourself a property here and settle (but you can’t, if you don’t have a domicile, just saying). Munsiyari is also fringed by many beautiful waterfalls and lakes which add more to this epitome of beauteousness. 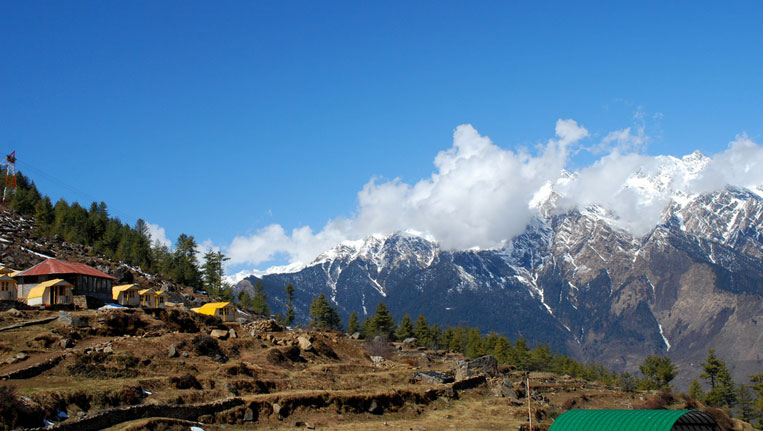 The modern-day directors have realized I guess that it is not necessary to go to Switzerland or any other European country to shoot a film. India itself has destinations that are good enough for adding that exotic feel. Take an example of Auli, this unsurpassed destination in Uttarakhand is no less than any town or village of Switzerland, it is pristine and you can’t take your eyes off it, there I have said it! Also, do you know, Auli is one of the best places for skiing and had been a host for annual winter games in India? Well, you have a lot to learn about this destination, so visit, you never know you might get lucky to catch a film shoot. 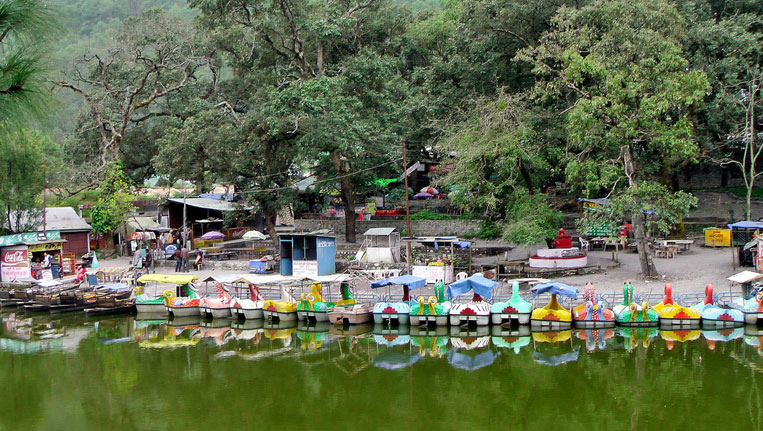 Each time I am in Sattal, I think, how nice it would be to shoot a film at this lesser-explored destination in Uttarakhand. At about 25 odd kilometers from the famous tourist place, Nainital, Sattal is indeed a place to find respite from the hullaballoo of the city life. What catches your eyes here the most is the greenery and absence of human interference. Also, you cannot forget the fact that the place has been named so for a reason. Yes, there are seven gorgeous lakes by which you can shoot several scenes for your film. I wouldn’t hesitate to say that this travel place has an eerie feel to it, so if you’re considering a location for a horror film or something diabolical, Sattal may suit your preference. 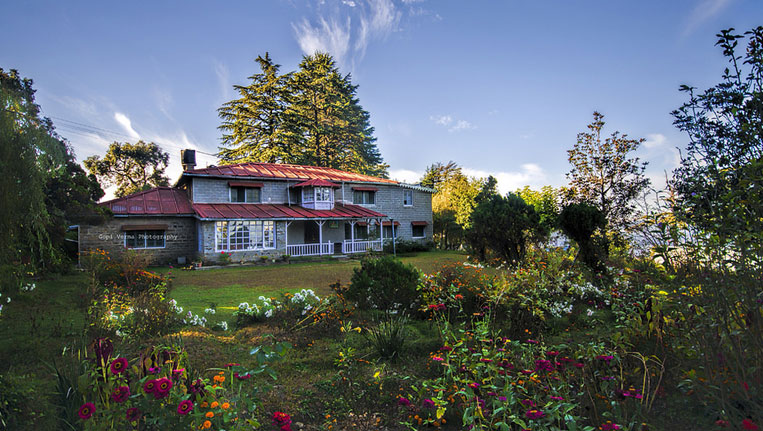 Here’s another location for your horror film. This lesser-known hill station in Kumaon region of Uttarakhand, is more than perfect for those eerie backdrops that are drop dead gorgeous by the way. The lush greenery; colonial style cottages and a church; and the cover of mist, well, I can’t really think of a better place for a film shoot in Uttarakhand than Abbott Mount. What do you know, the place has some frightful tales of its own, of which the locals will be glad to tell you about. Guess I am too obsessed with the concept of horror films shot in the hills, and literally, it is giving me a chill down my spine at the moment (maybe it is the AC), so I should stop right here. 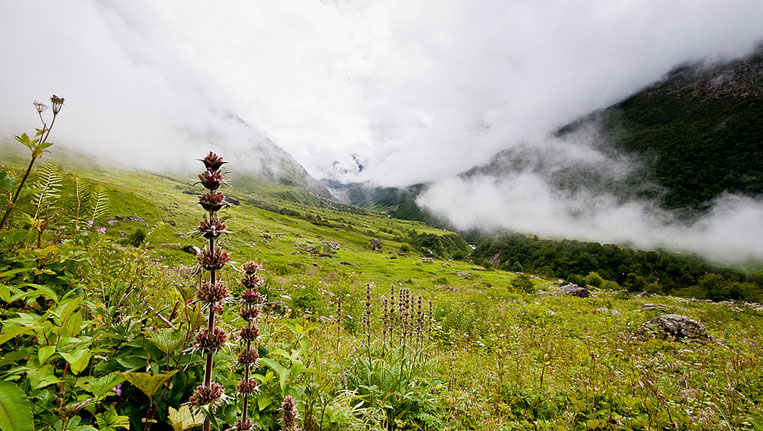 Not sure, if the authorities would ever allow a film shoot at Valley of Flowers, nonetheless, you must be made aware of this jaw-dropping destination in Uttarakhand. A high altitude national park, Valley of Flowers, as the name suggests, is a dale that blooms with over 600 species of plants in the monsoon months (June to September) making it look like a slice of heaven. Valley of Flowers dishes out as an important trek in Uttarakhand and if it was allowed, then this destination could be the most favourite film shoot location in India, and no exaggeration there. The place can actually make you forget Banff or Amsterdam. Read more about the national park here. 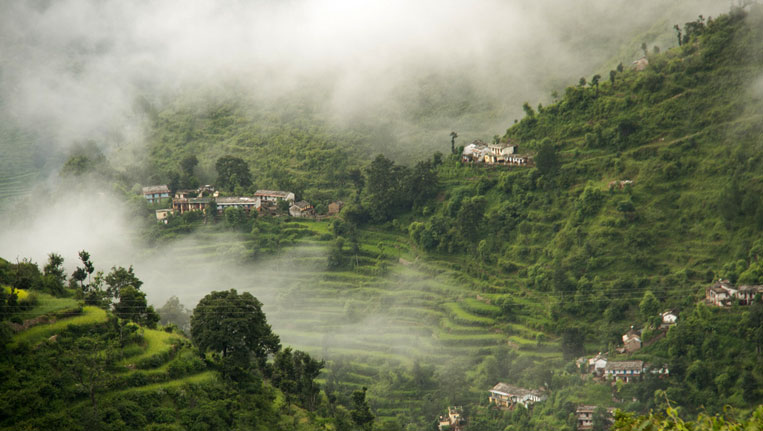 Thinking to give your film a very rustic and quaint look but then again not considering a foreign location? Well, Khirsu in Pauri can solve your problem. This countryside kind of a place has an ambiance to die for with unperturbed surroundings that are green and serene, wow that somewhat rhymed! Khirsu is a short distance away from Pauri, an important travel place in Garhwal region of Uttarakhand, and is lesser known, so you can eventually have this place all by yourself. And when I say serene and green, I mean you can sight apple orchards here along with dark woods of Oak and deodar, sounds fancy? Well, it is, and you can certainly find several spots to shoot scenes for your film in Khirsu. 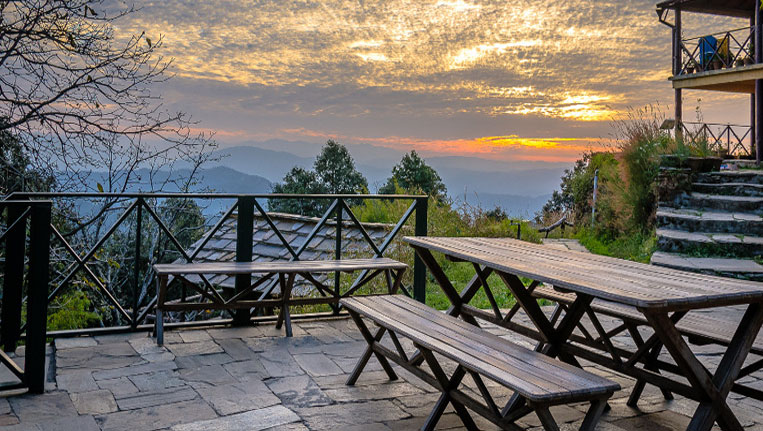 I was in a debate with myself if I should put Almora in the list or just Binsar, well you can clearly see who won my vote. It’s not that Almora is not beautiful, but Binsar’s quaintness has its own charm. Since we are doing a list of best remote places in Uttarakhand for a film shoot, I thought Binsar would be a more convincing destination. Tucked away in the Kumaon hills, Binsar is a sleepy hamlet that can be an excellent backdrop for a romantic film, well the directors know better. For me Binsar’s best interpretation would be a place where you can shoot a movie on a family getaway which then turns out to be something else for each member as several secrets unfold, I am not going to give you more ideas on the story, because hey! I charge for things like that. However, you can still come and reccy, and see how this place works out for you. Also, do not forget to visit the nearby Jageshwar temple complex, which can be yet another best place for a film shoot. 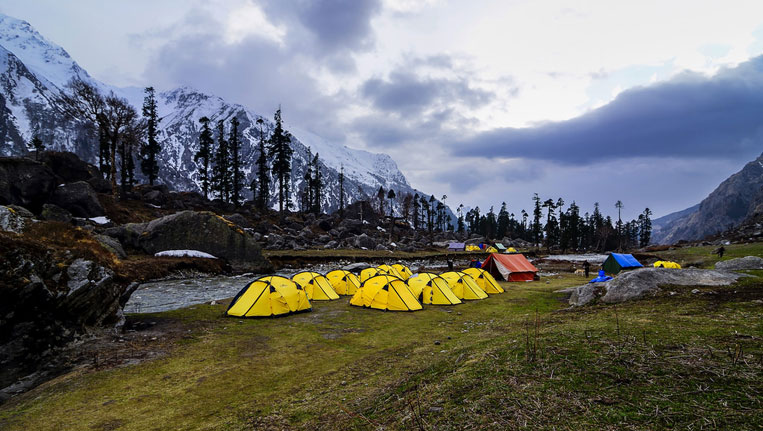 Forget Kashmir or Himachal, because what you were looking for has been hiding here all along in Uttarakhand. Har Ki Dun is a valley in Garhwal Himalayas, and you’d know you have reached it once you see the landscape turn incredibly beautiful. I am talking about carpets of green meadows, glacier basins, moraine ridges, a jungle of pine trees, and ancient villages. Har ki Dun is a commendable trek, and there is no way you can be ignorant about this beautiful place in Uttarakhand. The trek for Har ki Dun begins from the alpine Govind Pashu Vihar (national park), and though it may seem a bit difficult to access, chances are you will be shooting at one of the most gorgeous places in India. 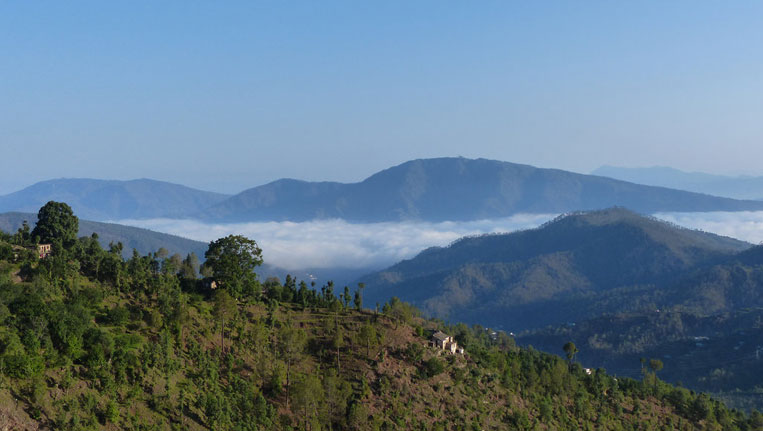 Clueless about this destination? So was I until a few months ago. It was for some blog on homestays in Uttarakhand that I was researching and this place caught my eye. The most surprising thing is, Nathuakhan is situated in Nainital District and being a native I did not know about it. In order to get rid of the guilt, I researched more on this unheard place in Uttarakhand, turnouts, it sits quite close to the famous tourist destination of Mukteshwar and is popular amongst those travellers who enjoy a homestay experience. Not exactly a village anymore, but Nathuakhan is surely a place which can offer that quaint look for some of your superhero or alien film. Like I said earlier, I ain’t giving you story ideas here, but I really think the setting of this place is perfect for some supernatural thriller, suspense film. Well, how you interpret the place is up to you, but one thing is certain that this unheard place can be perfect for an outdoor shoot with green rolling hills, meticulously designed homestays and Kafal and other native fruits orchards.

Well, these are some of the destinations in Uttarakhand, and trust me there are plenty more to be discovered. Need more details or help with arrangements for a film shoot in Uttarakhand? Tour My India will be more than happy to assist. Contact us at +91-9212777224 and info@tourmyindia.com to discuss your requirements and our services. With us, your travelling experience in India couldn’t get any better.