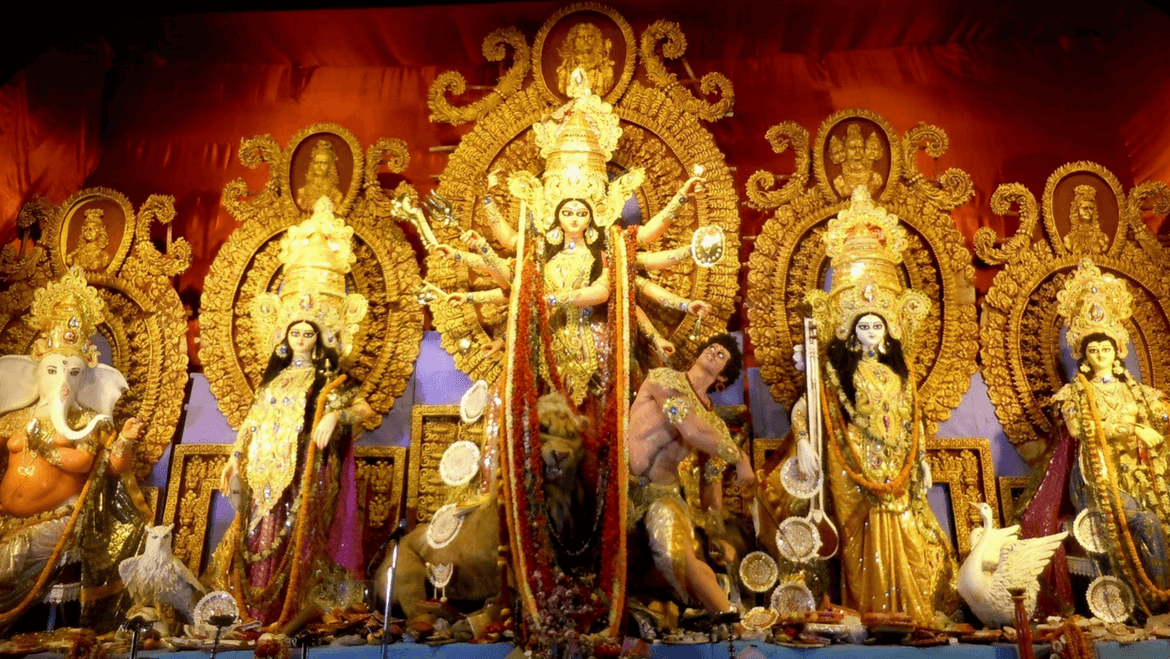 Durga Puja, Khichudi (Hotch-potch), and Misti (sweets) is the trio that Bengalis across the world love to identify with. While Khichudi and Misti have a stronger association with taste than with emotion and nostalgia, the PUJO thing deals with the soft corner of the theist Bengalis. Owing to the nostalgia attached to the Puja, Bengalis across the globe unite together despite all diversities in dialect and culture to celebrate Pujo with equal dedication.

Bengalis in Delhi are no way different in this regard and, in fact, to give everybody a homely feel, the Probasi folks started the trend of Baroyari Pujo (community) in 1910 which is till date celebrated maintaining actual traditional rituals. Bengali families who are permanently settled in Delhi during this time either keep themselves associated with different Pujo Pandals and their activities or somehow gather information about where to go for Pandal Hopping. But a new comer to Delhi often starts getting nostalgic because getting lost in the vast territory of the city is easy, and participating in the fun of Durga Puja gets dimmer. To help others like me who would like some help to hop through the Puja mandaps, I have compiled a list of Best Durga Puja Pandals in Delhi which would certainly make their Durga Puja equally fun filled as of their home town.

Started in 1910, the Delhi Durga Puja Samiti, popularly known as Kashmiri Gate Durga Puja, has grabbed the pride of being the oldest Durga Puja Pandal in Delhi. Maintaining the sanctity of the environment and traditional aura, the Pujo Pandal and Devi Pratima (idol) are crafted in classical style. Durga idol is made here in traditional Daaker Saaj (one frame idol) with crimped decoration in silver and gold. The Puja Committee celebrated its centenary year in 2009. Dasami Bhasan (immersion) is a must see event when the deity is brought to the River Yamuna on a bullock cart.

Top 20 Pandals to Visit During Durga Puja in Kolkata

Timarpur Puja Samity, which celebrated its centenary year in 2013, has created a benchmark of sophistication and classic style Durga Puja in Delhi. The theme based pandals and artistic idols are the main attractions that can be witnessed in this Pujo Pandal. The tradition of taking the Deity to the immersion place on a bullock cart is still carried out here.

If you are very fond of Bonedi Pujo (aristocratic) and looking to get the same feeling in Delhi, reach Minto Road Puja Samity. The Puja came into being in 1940 and since then it has been maintaining its aristocratic glory. Shastriya Pratima (classic style), sophisticated designs of the pandal, and the perfectly maintained tradition makes the Pujo of Minto Road a must attend event during Puspanjali and Dhunuchi Naach.

The hub of Bengali culture and commencing point of the major Bengali Festivals, C R Park Kalibari (Chittaranjan Park) is among the most colourful Durga Puja Pandals in Delhi. Maintaining all the religious norms, the priest performs the rites including Sacrifice, Bhoga, Pushpanjali, Yagna and Arati. People fond of Dhunuchi Nach must go to this temple. For Durga Pujo, the temple has its permanent Mandapa.

A must see Puja Pandal in Central CR Park, Co-operative Ground Durga Puja Samity can be regarded as one of the leading Pujo Pandals in the city which was also responsible for introducing the thematic Durga Puja in Delhi. The Puja first commenced in 1976 and has been the winner of Times of India’s – “Durga Devi Namustute Award” for a number of consecutive years. In 2013, the idol was made with a blend of modern touch and classic tone. Sholar Saaj was used to do the ornamentation of the deity. Introducing different styles of idols, the pandal has turned into one of the most visited Durga Puja Pandals in Delhi. Cultural Nights are the main attractions of this Puja Pandal.

Among the culturally enriched Puja Pandals in Delhi, Mela Ground Durga Puja Samity holds a very special place in the hearts of devotees. Here a culture centric person like me can identify himself much easily because several cultural competitions are organised here in one week advance. Conch Blowing, cooking, Football and various sports are organised for the adults, whereas, kids would love to join the activities like sit and draw, musical chair, recitation and song competition. Do not miss to get Bhoga Prasad during Navami Puja.

Utterly sophisticated and neatly designed Milani Puja Committees Pandal has created a benchmark for aesthetic lovers. The puja is organised inside a park in Mayur Vihar-1 near DDA society flats with the entire area turning into a centre of religious fervour and fun-filled activities for 5 days of Durga Puja. The committee is remarkable for its ability to stand apart from other pandals, especially through its creative themes and idols; while selecting an idol and a theme, the entire set of the Mandap is kept in mind.

Top Spiritual and Holistic Must-Have Experiences on Your India Trip

Perhaps one of the best Durga Puja Pandals in East Delhi, Mayur Vihar-1, Kalibari has maintained the legacy of the typical Bong Durga Puja. They have a permanent Mandapa which is decorated in creative style to bring exclusive aura. As the Puja is organised inside the temple premise, the divine feeling seeps into the inner soul of devotees. The evening arati with the rhythmic sound of Dhaak get the real Puja feel enlivening. If you are fond of Bhoga Prasad, you must reach here at mid noon when delicious Bhog is served to the devotees for all three days of the Pujo.

Those who are devoted souls of Goddess must go and visit Matri Mandir Samity Safdarjung Enclave. Puja is organised here maintaining all the religious rites and believed to be one of the must-witness Durga Pujas in South Delhi. Apart from the idols, the Pandal also looks eye-catching and most of the times artists are hired from Kolkata. The temple of deity Kali is believed to be very consecrated by the devotees. So, go and take the blessings of both the incarnations of mother at one site.

Must Visit Shakti Peethas in India: The Divine Seats of Cosmic Power

One of the big budget Durga Pujas in Delhi, Arambagh Durga Puja Samity celebrated its silver jubilee year in 2013. A budget of 1 Crore rupees was utilised by the committee last year. The theme was pretty out of the box. The glittering golden Mandapa was made in Buddhist Gompa style and to bring the feel of Buddhist Monastery several models of Thonkas, murals and Buddhist Prayer Wheels were designed.

Well! This was all about the Durga Puja Pandals which have gained prominence over the year due to their strong cultural backbones, funding and suitable locations as well. But, let me give you a few more names that you can try visiting:

Okay! I forgot to tell you about the most important part of the Delhi Durga Puja, and that is the availability of food stalls in and around the Pujo pandals. So foodies might like to have a plate of Karim’s Chicken Biriyanni or Korma and a sweet lover would never like missing Pista Kulfi or a mouth watering Gulaab jamun after offering prayers to the deity. Now, I guess you would be happy knowing so many options other than Chittaranjan Park. Stay blessed! I wish you get a leave for Ashtami Pushpanajli or may be for having Bhog on Navami.