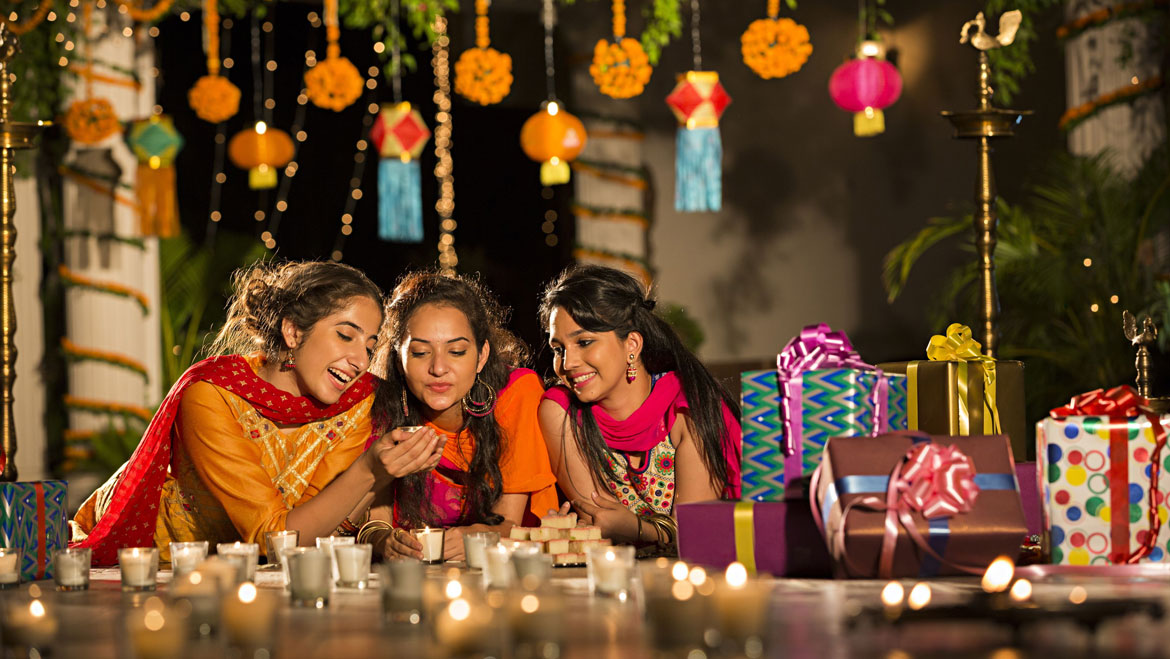 Being a potpourri of communities, Delhi reflects the grandeur and glory of Indian history and culture in the most sensuous and enchanting way. The capital shades its every nook and corner in many hues of celebration throughout the year long. Whether it is the pomp of a Guru Parab or the lavish mouthwatering “IFTAR” during the holy month of Ramadan, each festival portrays a unique and striking face of DELHI and DELHIITES.

Though there is no end of festive celebrations in Delhi, many of which start early in the morning and end late in the night, the magnetism that evening festivals have is quite breathtaking. From the illuminated market streets to the brightly decorated buildings to the night-long musical and dance extravaganzas, it is hard to beat the charisma of evening celebrations in Delhi. Enjoy these following top evening celebrations that are a must- see for every resident and visitor in Delhi.

Put on your dancing shoes and swing to the beats of loud music as it is the time of non-stop MASTiiiiii! New Year is probably an international event that is celebrated in the same rocking style all over the world. In the national capital Delhi, it is hard to ignore the buzz of New Year’s celebrations. Hotels, restaurants and nightlife venues come up with numerous ideas and theme parties to gear up for this big celebration. Whether you like to throw a lavish party with your gang or want to welcome the next year with your beloved, Delhi is always the perfect place to enjoy and experience New Year celebrations. Everybody puts his/her best efforts to make the day special and that’s why New Year eve is considered as one of the favourite evening celebrations in Delhi.

Celebrated in mid-January when freezing winters are at its peak and mercury hovers between 7°C and 2°C, Lohri brings a dose of warmth and happiness. Despite being a popular festival of the Punjabi people, Lohri is celebrated with the same zeal and enthusiasm by the people of other communities too. This much-awaited bonfire festival marks the harvesting period of winter crops, especially wheat. In the morning, children go door-to-door and ask for the Lohri ‘loot’ either in cash or in kind but the main part of the festivity begins at dusk. People dressed in bright attires gather around huge bonfires, the main symbols of Lohri’s carnival lit up in open areas, to sing and dance till late night. The rhythmic moves of BHANGRA on the beats of drums by the men group and the popular gidda dance by women make the entire set up so lively and vibrant that it simply rocks you!

It is a month-long affair in which Delhi’s historical lanes relive its glorious days and become one of the most visited areas of the capital city. It is well-known that the holy month of Ramadan or Ramzan) is very specific for Muslims. Delhi, being populated by over 10% of Muslims, is an excellent place to enjoy this festive season. It is a great delight to stroll in the narrow yet well-lighted lanes of Old Delhi, Jamia Nagar and Nizamuddin areas after sunset where eatery owners are busy in the preparation of dishes for “IFTAR. Lost in these alleys of aroma and taste where mountains of pakoras, samosas, jalebis, dates and other delicacies welcome every nightlife lover.

With chants of “HARE RAMA HARE KRISHNA” everywhere and thousands of people thronging every small and big temples of Lord Krishna, Janmashtami Festival is one of the top must-see evening celebrations in Delhi. It is one of the famous and biggest religious festivals celebrated all across the world. By this only you can easily judge the devotion and enthusiasm of people who belong to the land of KRISHNA. Janmashtami festival memorializes the earthly appearance of Lord Vishnu in his eighth incarnated form (Krishna), which is considered as the most charming appearance. Brightly decorated and illuminated temples and market areas are the main attractions of this festival. People sing and perform plays and ras-leela acts (dances portraying the events of Lord Krishna’s life) that go on till late night. Celebrated throughout India, Delhi, Mumbai, Mathura, Vrindavan and Dwarka are the major places where this festival is more than a celebration.

If you are in Delhi during the month of October then one celebration that one should never miss is the Durga Puja, the main festival of the Bengalis. Dance, drama, cultural performances, shopping and of course yummiest Bengali food, it is a complete theatrical and social event with a vibrant feel. The last five days of Navaratri’s festivity is celebrated as Durga Puja, also known as Durgotsava and Sharadotsav. This annual festival is dedicated to Goddess Durga and each day has a distinct name and significance. Marked as the victory of good over evil, the main highlight of this festival are the huge and beautifully adorned idols of the deity. Among the several PUJA PANDALS set up in various areas of Delhi, notable ones are of Chittaranjan Park, Kashmere Gate, Safdarjung Enclave, Greater Kailash II and Mayur Vihar I. The celebration of Durga Puja continues throughout the day but the fascination of the festival increases after sunset when majority of people throng the pandals and enjoy every bit of it till early morning next day.

Soak your spirit in the grand victory of good over evil! Sights of big and colourful effigies of Devil Ravana, his son Meghnath and his brother Kumbhkaran on Delhi’s streets and grounds infuse a spark of gusto in locals and tourists. Dussehra Festival not only marks the end of malevolence but also brings Navratri Festival to a halt after a 9-day long extravaganza of fun and frolic. It is also known as Vijaydashmi and is the last day of captivating Durga Puja celebrations marked with the immersion of Goddess Durga idols in water. Fairs are generally held on the occasion of Dussehra at various places in Delhi and provide great opportunity to enjoy the famous STREET FOOD of DELHI. The energetic Gujarati “GARBA DANCE” performed during Navratri Festival is a major attraction of Vijaydashmi’s celebrations. Do not miss hot mouthwatering ‘jalebis’ on this occasion.

Experience the magic of evening festivals in Delhi with “Festival of Lights” or Deepawali (series of lamps). Symbolizing victory of light over darkness, this Hindu festival is celebrated not only in India but also in various other countries like Nepal, Sri Lanka, Malaysia, Singapore, Myanmar and Mauritius. From brightly decorated houses, buildings, streets and markets to sharing gifts and sweets with dear ones, Diwali presents the most striking show of light and sound on the landscape of the city. Thousands of lamps lighting on a full new moon night (amavasya) create a world of fantasy for viewers on earth while the beautiful display of firecrackers create an enchanting VIBGYOR in the sky. The whole illuminating scenario is just amazing!

Note* Markets in Delhi are flooded with a wide range of objects and decorative items, people shop a lot on this occasion.

Crossing all boundaries and limitations of nationalities, religions and age groups, Christmas Eve is gripping Delhi city in its festive mood speedily. It is the time when Delhi and Delhiites both are shaded in the spirit of red, green and white colours. Decorations, baking cakes, wrapping and exchanging gifts and sweets, singing Christmas carols and preparing lip-smacking treats are some of the most popular activities that people enjoy doing a lot during Christmas festival. Most of the hotels, restaurants, banquet halls and nightclubs organize Christmas parties that go on till late in the night. Shopping malls and flea markets of Delhi witness a large number of partygoers and shopaholics. In short, Christmas festival in Delhi is totally about shopping, dining and party.

It is well said that there is no better therapy than music and Sunburn Festival proves it in a rocking style. Reputed as the biggest music festival in India, Sunburn is a 3-day gala in which renowned Indian and international DJs entertain music and dance lovers with their live performances. The festival was first inaugurated in 2007 and from then onwards, the fever of this electronic musical event is on the rise. Casting a spell of magic over the performances of dancers is the combination of disco and laser lights that make the entire set up more lively and appealing. The event is organized in various cities throughout the country among which Delhi is an all-time favourite.

Note* Children below 18 years are not allowed to attend Sunburn Festival.

An adventure aficionado from New Delhi, Rashmi is a travel writer who loves to share her expeditions’ memoirs with other travel junkies. She has a special place for India and its rich legacy. With a fascination especially towards adventure activities and delicious aromatic food, she desires to explore every nook and corner of India. Rafting, trekking and paragliding is her favourite activities while Ladakh and Rome are her dream destinations.