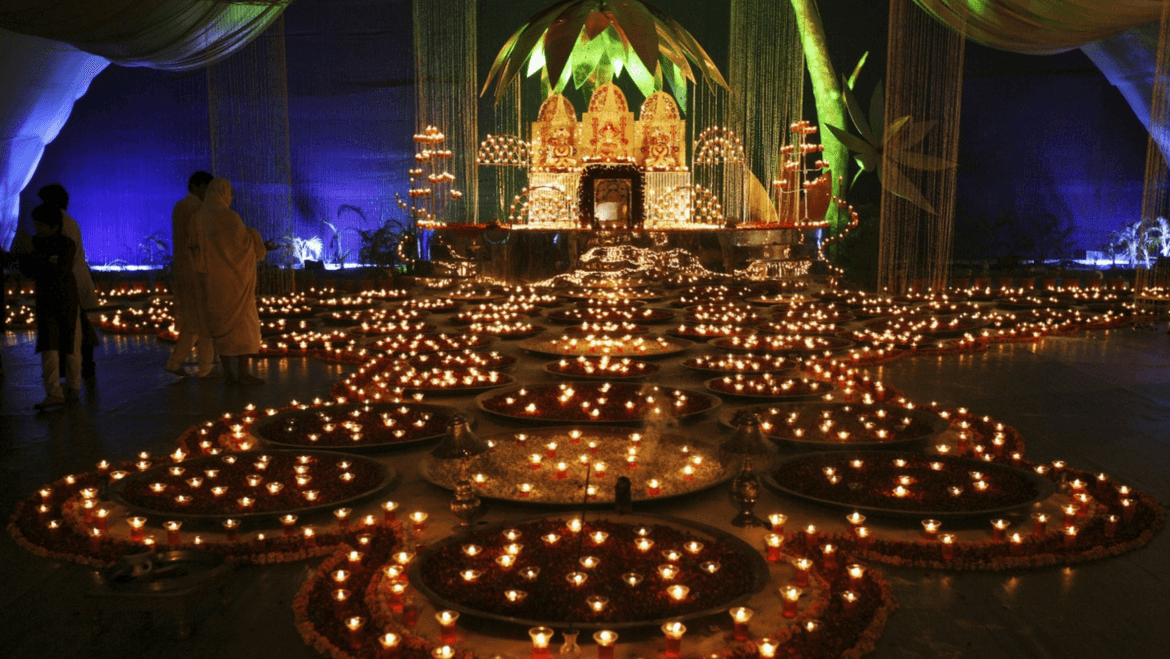 A day that marks an essence in the Jain calendar, the Mahavir Jayanti festival is celebrated by the Jains, which is one of the oldest religious community in India that stepped with the birth of Adinatha, who was the first Tirthankara (omniscient teacher) of Jainism. The Mahavir Jayanti Festival, held on an auspicious day of the rising moon of ‘Chaitra’, is celebrated to commemorate the birth of the last Tirthankara, Mahavir. Though the birth place of the spiritual leader is still an obscure but according to Jainism, Mahavira was born in 540 BC into the royal family of King Siddartha of Kundgraam and Queen Trishala. The celebration takes place in all the Jain temples across the world and further, many engage in some sort of charitable act like feeding the poor and saving cows from slaughter. On this auspicious day, local statues of Lord Mahavir is given a ceremonial bath, which is known as ‘abhisheka’. The Mahavir Jayanti festival experiences the rush from major international tourists from Sri Lanka, Belgium, Canada, Hong Kong, Japan, Singapore and United States.

A Brief History on Jainism

The origin of Jainism is still concealed in the chapters of Indian history but it is believed that Parsva, whose followers are referred in the canonical books, is the first Jain figure who lived somewhere in between 9th-7th century BC. According to the historians, Adinatha, who was also known as Rishabha and born in between 7th-6th century, is the traditional founder of Jainism and later after the birth of Mahavir, who was also known as Vardhamana, was the twenty-fourth and last tirthankara. Traces of Jainism remains in ancient Ayodhya, which is the birth place of Adinatha, and in Vaishali, Jamui and Nalanda, currently all in Bihar. The Jains traditionally followed ‘Purva’, which was a collection of Jain scriptures that was preached by all Tirthankaras but was lost because of famine that resulted the of several Jain saints. Since the origin the Jains were the followers of the principles of non-violence, self control and creed. In the later period, during the reign of the Mauryan dynasty, Emperor Chandragupta was converted to Jainism but his grandson Emperor Ashoka was turned to Buddhism. In the 1st century BC, Emperor Kharvela of the Mahameghavahana dynasty conquered Magadha and marked the presence of Jainism in Udayagiri and Khandagiri in Orissa. Over the years the Jains left their footprints in several Indian states, currently like Tamil Nadu, Karnataka, Gujarat, Rajasthan, Maharashtra, Madhya Pradesh and Chhatisgarh.

Jain Temples in India to Visit during the Mahavir Jayanti Festival

In the midst of several Hindu temples, Buddhist monasteries, churches and mosques in India most of the ancient Jain temples are in ruins except few that can be spotted in the states of Maharashtra, Madhya Pradesh, Karnataka, Rajasthan, Tamil Nadu, Gujarat, West Bengal, Orissa and Delhi. The noted ones are as follows:

Ellora Caves, Maharashtra: Popular for its rock cut temples belonging to Jainism, Hinduism and Buddhism, the Ellora Caves brings forth 5 caves demonstrating the religious essence of the Jains in between the period of 5th century and 10th century. It is a world heritage site and is maintained under the Archaeological Survey of India. Cave 30, the Chhota Kailash; Cave 31, which is an unfinished four pillared hall; Cave 32, Indra Sabha; Cave 33, Jagannath Sabha; and Cave 34, which is a small cave having some rock cut work, are the most prominent Jain shrines. The site is approximately 30 kilometers from Aurangabad, 340 kilometers from Mumbai and 260 kilometers from Pune.

Palitana Temples, Gujarat: Scattered with hundred of temples on Mount Shatrunjaya in Gujarat, the Palitana Temples are considered as the holiest of all pilgrimage sites by the Jain community. The main shrine is dedicated to Rishabha that belongs to the Svetambara Murtipujaka sect of Jainism. There is only one shrine that belongs to the Digambara sect. The temples date back to the period between 11th century and 16th century. The Palitana temples are approximately 220 kilometers from Ahmedabad and 160 kilometers from Rajkot.

Ranakpur Temples, Rajasthan: Built in the 15th century, the Ranakpur temples are considered as the most remarkable and largest temples of Jainism that boasts an exceptional masterpiece of intrinsic works along with 24 pillared halls, 80 domes and 400 columns. Amongst all the temples in the complex, the Chaumukha temple, Parsavnath temple, Amba Mata temple and Surya temple are the noted ones. The Chaumukha temple is dedicated to Rishabha. It is said that the construction work of the temple took approximately 65 years and it covers an area of 48,000 square feet with 1,400 exquisitely carved pillars. The temple complex is easily accessible from Udaipur, which is approximately 95 kilometers away.

Udayagiri and Khandagiri Caves, Odisha (Orissa): Located close to the capital city, Bhubaneshwar, which is approximately 10 kilometers away, the Udayagiri and Khandagiri Caves in Odisha are considered as one of the oldest masterpieces of Jainism that houses several inscriptions and rock-cut statues. There are total 33 caves, 18 in Udayagiri and 15 in Khandagiri. Most of these caves were dug out during the reign of Emperor Kharavela in the 1st century BC. Other major Jain temples in India are the Bawangaja Temple in Barwani district of Madhya Pradesh, Dharmanath Jain Temple in Kochi city of Kerala, Kulpakji Jain Temple in Nalgonda district of Andhra Pradesh, Shantinath Temple of Khajuraho in Madhya Pradesh, Shikharji Temple in Giridih in Jharkhand, Sonagiri Temple complex in Madhya Pradesh, Dilwara Temple in Mount Abu in Rajasthan and Gomateshwara Temple in Hassan district of Karnataka.

“Explore the most popular Jain pilgrimage sites in India with Tour My India at affordable prices. Call @ +91-9212777223/24 for more details”