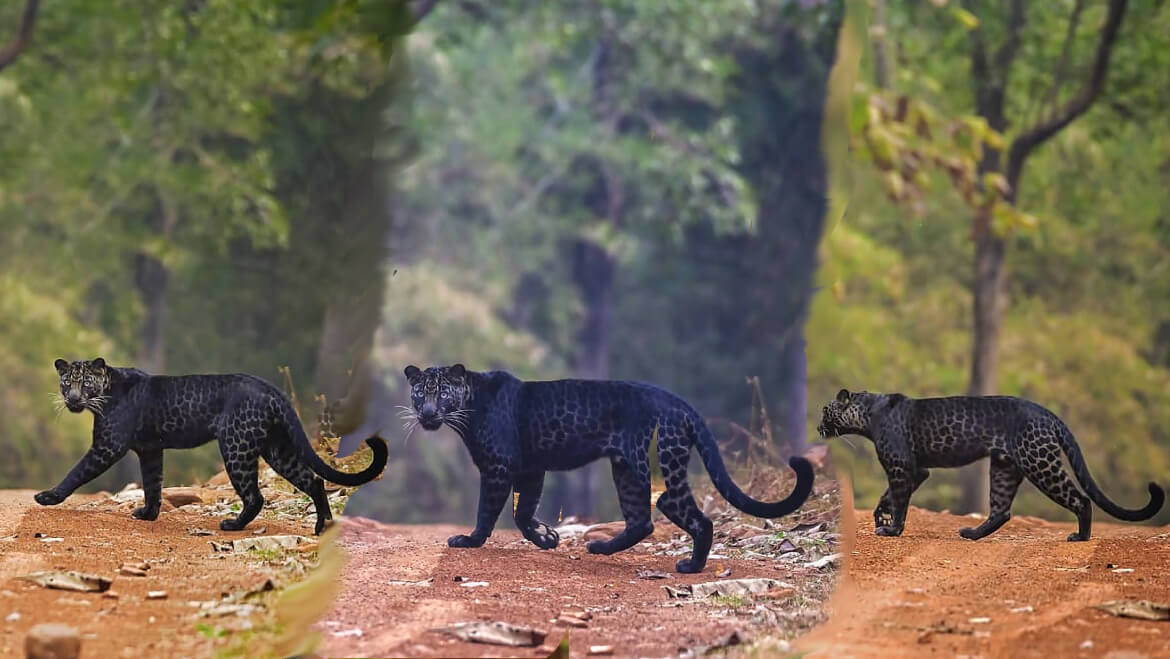 Unique, needle in a haystack and chills, those are some of the ways that Anurag Gawande, a 24 year old photographer, chose to describe his experience of capturing the sight of a rare black leopard in Tadoba National Park in Maharashtra in his camera. Ever since he shared the photos on Instagram, they have gone viral, drawing a lot of likes and comments. The entire episode was nothing short of extraordinary, since black leopards are rarely seen, and even less, captured in photographs.

Details of how the rare leopard was captured on camera 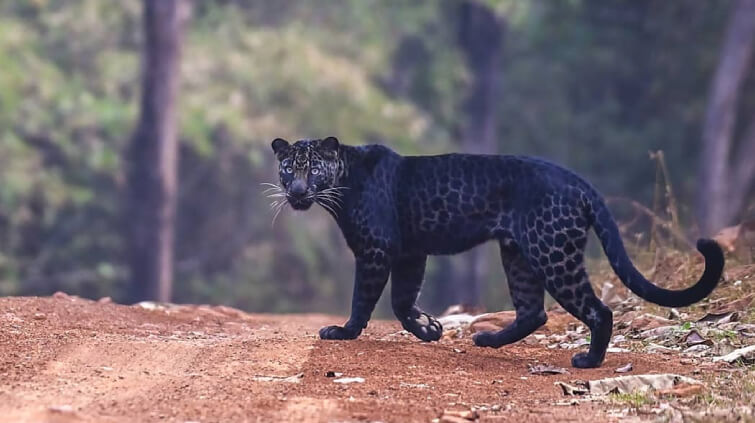 The rare black leopard in Tadoba National Park in Maharashtra was captured by Anurag Gawande when it was crossing the road while hunting a deer. The photographer was enjoying a wildlife safari with his mother and brother when he caught sight of the black leopard. 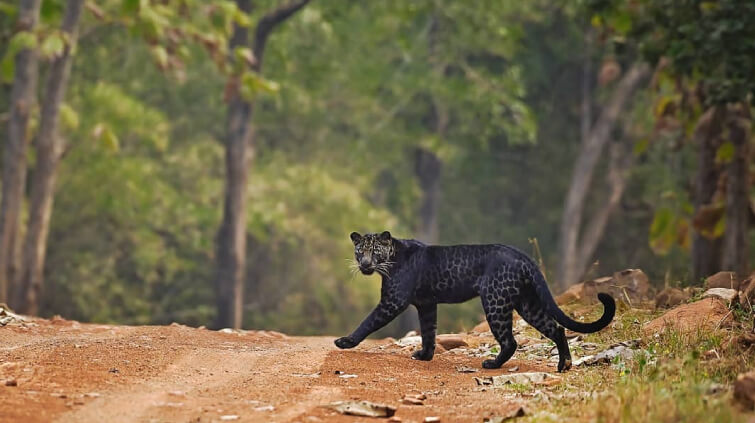 Describing the entire event in detail, he said, “I was waiting for a tiger to come out of bushes as there was a strong calling of deer. As I was heading towards the hilltop, I saw two gypsy cars lined up with the leopard some moments ago. When you watch it with open eyes, you don’t see any spots – it looks totally black. Its coat was shining and even though the whole encounter lasted for about one minute, this leopard has given me the most iconic moment of my life.” 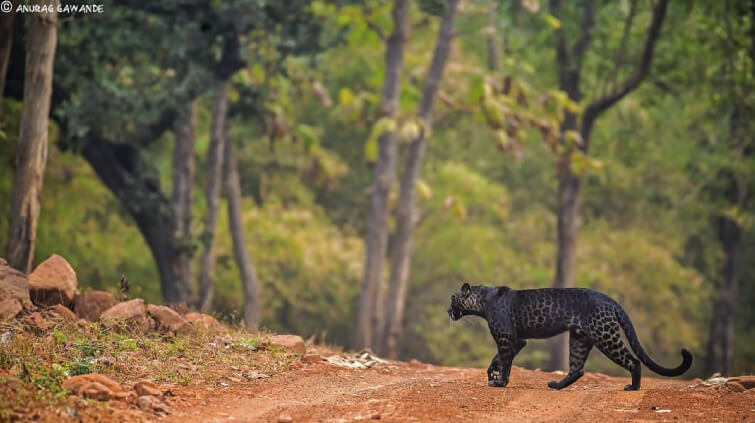 He added, “I waited there for about five minutes and heard the calling of sambar deer, and on the other side when suddenly the guide shouted – it was a black leopard. When it started walking, I was able to see some of its spots, and also because of its black colour, its white paw stood out. I was in search of it for the last two years. It was a dream come true moment. I was very excited but at the same time I knew it could be my first and last chance of capturing it. I calmed myself and held my camera and started capturing. It started crossing the road. The whole moment was over in one minute.” 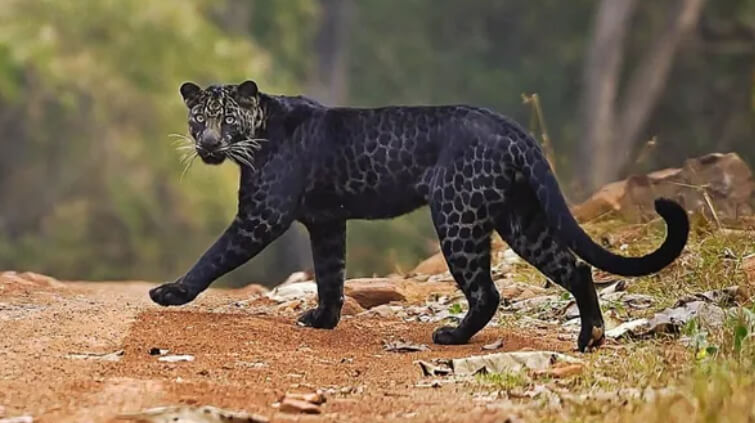 Anurag went on to say that he had had several thrilling experiences before, but none like this one. It was also sheer luck when the black leopard disappeared into the bushes because of the commotion, but reappeared for a couple of minutes, giving him the chance to capture the sight of this elusive & beautiful animal in his camera. Below are the pics shared by Anurag Gawande on his Instagram post.

How do black leopards get their black skin? 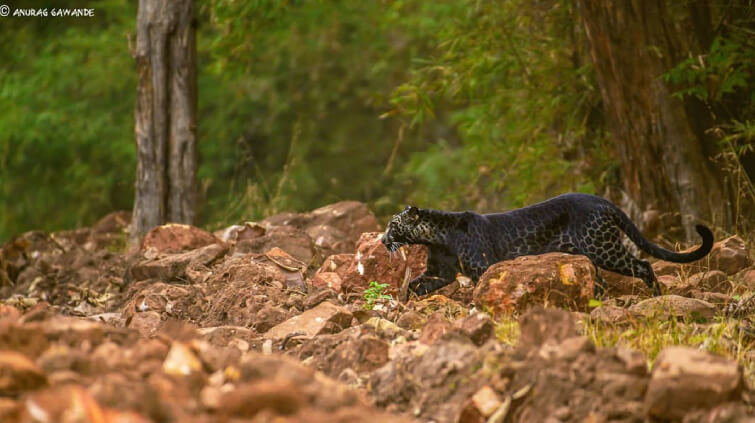 A black leopard, or a melanistic leopard, as they are also known as, is extremely rare to come across, which makes them so mysterious in the eyes of humans. Their exact numbers around the world are unknown, with sightings being reported once every few years.

Melanism in leopards is caused by a mutation which eliminates a gene that regulates the production of melanin. This, in turn, leads to an overproduction of a certain pigment, which turns the coat colour black. The coat still retains the same features as a non melanistic leopard, including the rosettes and spots.

Places in India where you MAY spot the black leopard

Below are the famous national parks and wildlife sanctuaries in India where you may have a chance to spot the black leopard, but the chances are next to none, unless lady luck smiles on you.