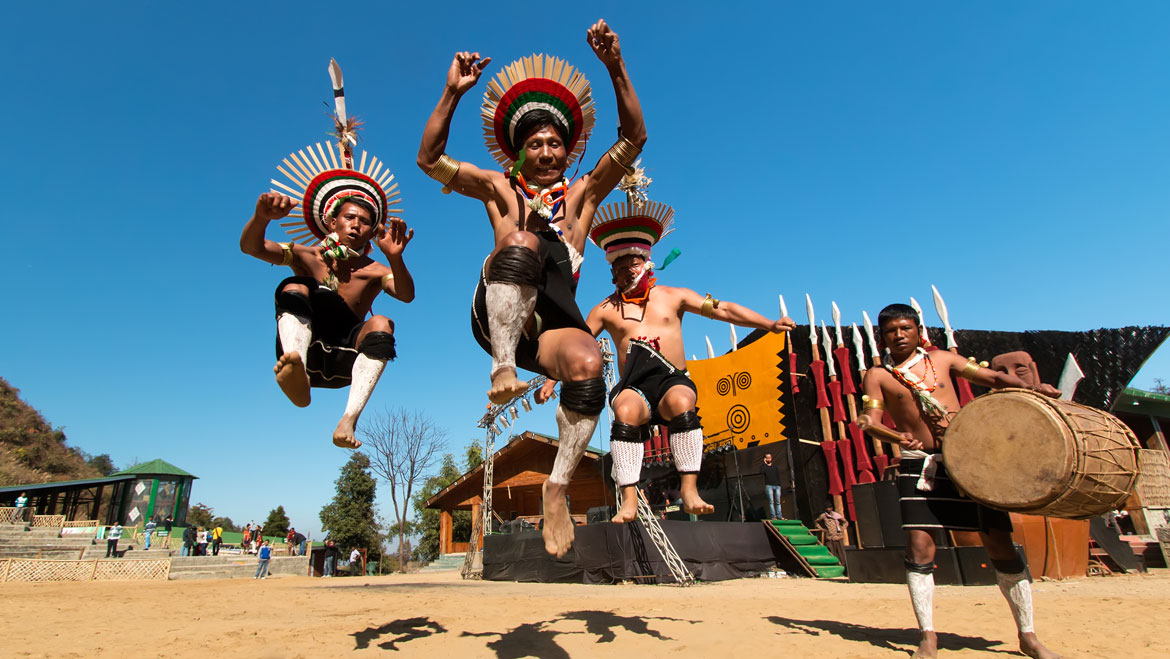 North East India is a treasure trove of rich culture and tradition. It is unfortunate that even today most of us are unaware of the celebrations and lifestyle of this part of our diverse country. There is so much for each of us to learn from North East India and one of the best ways is to be the part of their cultural festivals that are many in numbers but are still mystery to us. However, there are few festivals in the region that have gained popularity in the recents years; thanks to the avid travellers and social media platforms. Witnessing these known festivals is like tasting a small portion of the whole scrumptious pudding that is waiting to be eaten up. Imagine how great it would be to taste the entire pudding if its small portion tastes so heavenly. Here (just for the start) is a list of festivals in North East India that one can see in the month of November and December. 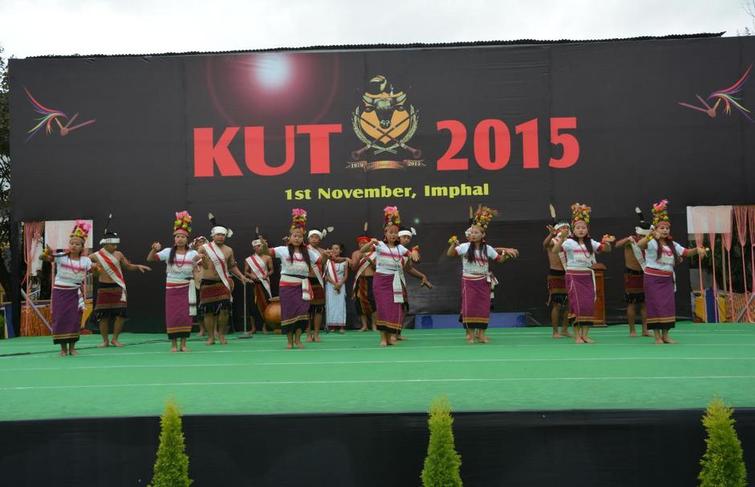 The Kut Festival is an Autumn festival celebrated by different tribes of Kuki-Chin-Mizo groups of people in Manipur. The festival is revelled by the tribes to give thanks to the supreme power for their plentiful stock of food after a year of hard labour. People sing songs and perform dances along with merry making. One of the main highlights of the Kut Festival is the Miss Kut, a beauty pageant organized at the 1st Bn. Manipur Rifles parade ground. In the recent years, Kut Festival is seen as a way of garnering peace, communal harmony, friendship, and forging new ties. 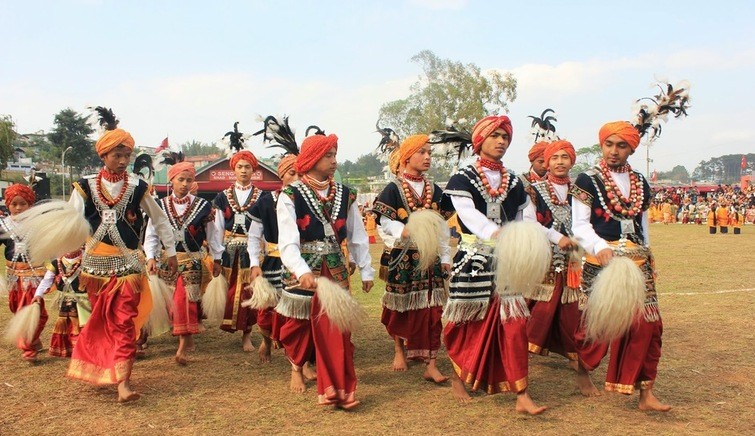 The Nongkrem dance festival is celebrated during Autumn season in Meghalaya. It is five day long religious festival of the Khasis and takes place in Smit, the cultural centre of the Khasi Hills. Also known as Ka Pemblang Nongrem Dance, it is performed to appease the Goddess Ka Blei Synshar for a rich harvest and prosperity of the people. During the festival, the high priest performs the Pemblang ceremony and offers oblation to a Lei Shyllong; the god of Shyllong peak by sacrificing a cock. Then offerings are made to the ancestors of the ruling clan to the deity of Shillong peak. In the dance performance, the unmarried girls participate wearing exotic costumes. The men’s dancing is more vigorous and energetic. They hold a sword in their right hand and usually a white Yak hair whisk in their left hand while they perform on the changing beats of drums an of the tangmuri (pipes). 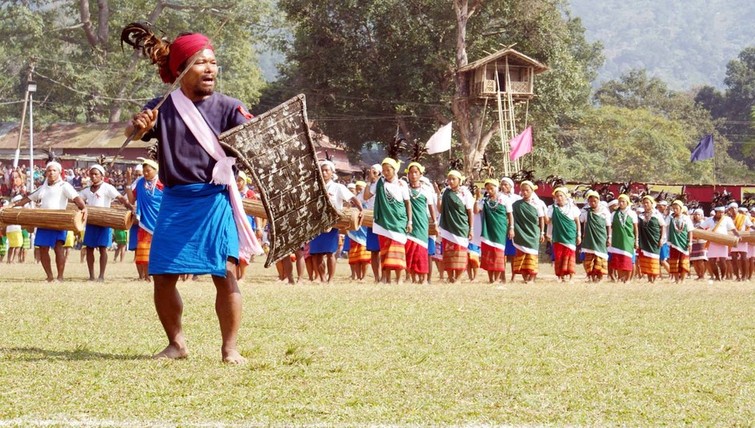 Wangala Festival is also known as the “100 Drum Wangala Festival”. It is a winter harvest festival that is celebrated by Garos in the honor of Misi Saljong (The Great Giver). Wangala Festival marks the beginning of winter and end of labor in fields, thus beckoning a period of relaxation and merry making. It is a weeklong festival celebrated in the second week of November every year. Music and dances are significant parts of the Wangala celebrations. The main attraction of the festival is the music and orchestra of drums, gongs and flutes, and an ancient traditional flute made of buffalo horn. A village chief, also known as the Nokma, performs a ritual a day before the festival. In this ritual, freshly brewed rice-beer, cooked rice, and vegetables are offered to the Misi Salong as thanksgiving for a rich harvest season. People of all age dress in colorful costumes with feathered headgears and then dance to the tune of music played on long oval-shaped drums. 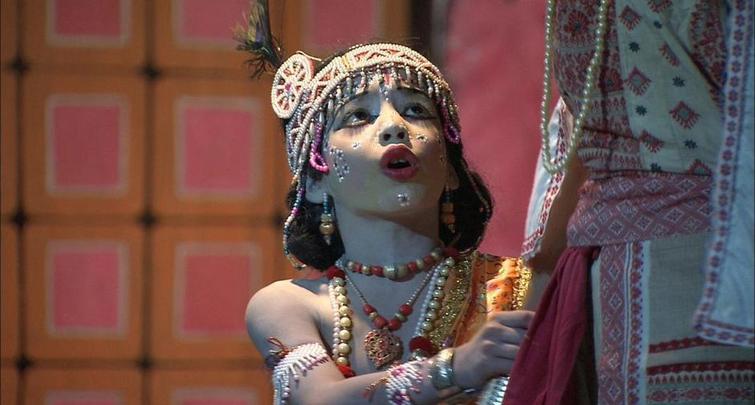 The unique festival in Assam is celebrated in Majuli, which is the largest inhabited freshwater island in the world. Majuli is famous as an important center of Vaishnava culture and a bio-diversity hotspot with rare varieties of flora and fauna. The place also boasts a glorious history of 500 years of Satriya (Assammese monastaries) tradition. In the month of November, Majuli hosts the Raas Mahotsav Festival, which is celebrates the divinity of Hindu God Krishna with infectious fever. All communities in the island play a part during this time. Children act in plays, teachers lend their voices to characters, shopkeepers and bank employees recite songs and chants. Also various monasteries of the island stage various interpretations of Krishna’s life by using folk dances, puppets, masks, songs and dance.

10 Superb Places for Travelers in Assam 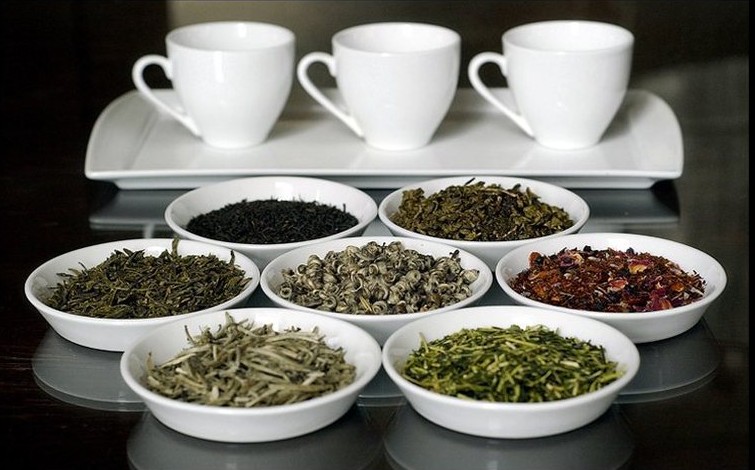 The Tea Festival of Assam takes place in Jorhat as well as in various parts of the state. The festival is all about tea, music and gaiety. It is probably one of the best festivals for tourists in North East India as during the festival they have the opportunity to visit the tea gardens, playing golf, safaris into the jungles, tasting delicious food items, shopping and cultural entertainment. Also adventure sports including angling and rafting in turbulent rivers are also on offer during the festival.

Orange and Tourism Festival is one of the major festivals to see in North East India for tourists. Conducted at Jampui Hills in Tripura, which is the only place where beautiful oranges are cultivated in the region, the festival celebrates the bounty of nature and the gift that Mother Earth. During the festival, the gorges and parishes flush the entire landscape with oranges and at dawn and dusk tourists can survey the abundance of Nature.

All You Need to Know About Traveling in Tripura 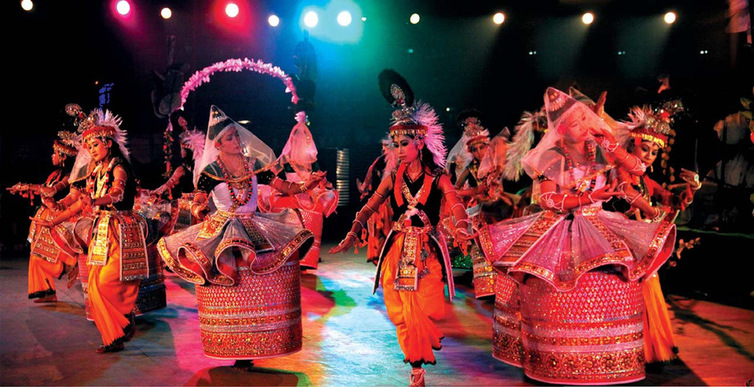 Sangai festival is an annual cultural festival organised by Manipur Tourism Department between November 21 to30 every year. The festival was celebrated with the name of ‘Tourism Festival’, however post 2010 this has been renamed as the Sangai Festival to stage the uniqueness of the shy and gentle brow-antlered deer popularly known as the Sangai (deer), which is also the state animal of Manipur. The festival is celebrated to promote Manipur as a world class tourism destination, thus during the fest, the best of Manipuri art and culture, handloom, handicrafts, fine arts, indigenous sports,cuisines, eco and adventure sports as well as the scenic natural beauty of the land is on a grand display. 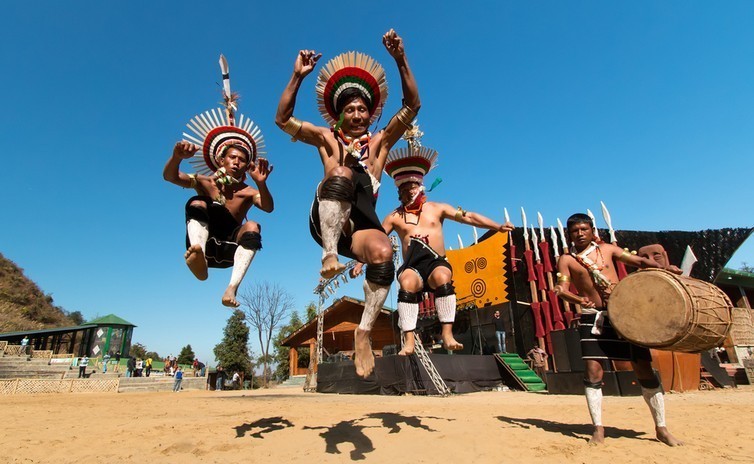 One of the most famous festivals in North East India, the Hornbill festival takes place at Kisama Heritage Village, around 10 kilometers from Kohima. It is a week long festival and each day the performances begin by 9 a.m. The Festival is attended by all the major tribes in Nagaland. During the festival traditional arts, dances, folk songs, and games can be witnessed. There are plenty of handicraft and food stalls. Rice beer can also be found in abundance during the festival. However, the main attraction in the festival is the Hornbill National Rock Concert. Bands from across the country come to compete here. This is followed by a night market and one can also witness/participate in the Naga chilli eating competition.

15 Great Places to See in Nagaland 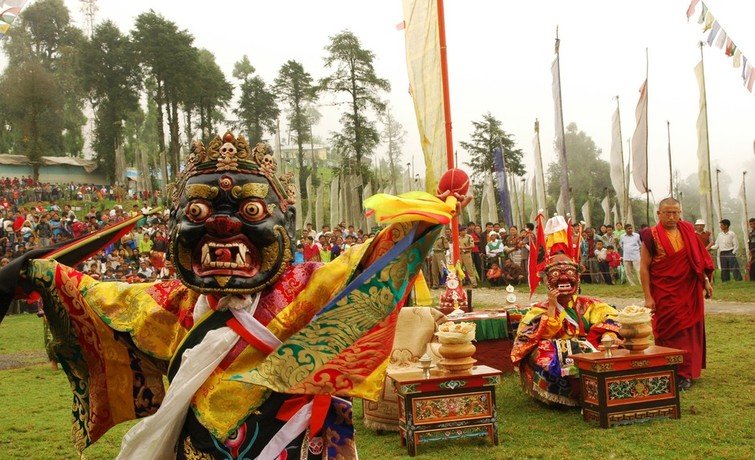 The Losoong Festival in Sikkim is celebrated every year in the 10th month of the Tibetan calendar. This is the best time to plan a visit to Sikkim as Losoong is an exotic carnival. The festival is celebrated by Bhutias as well as by the Lepchas to mark the end of the harvest season and people also pray for a better harvest for the next year during this fest. One can get the opportunity to witness the customary Cham dance. The dances are a way to exorcize the evil spirits and welcome the good spirit of the Sikkim New Year. One can enjoy tasting the local wine Chaang and witness the dances performed at various monasteries like Tsuklakhang Palace, Phodong and Rumtek Monastery. The occasion is also celebrated by traditional archery competitions. The Loosong Festival is an important festival in North East India and is a must see for tourists. 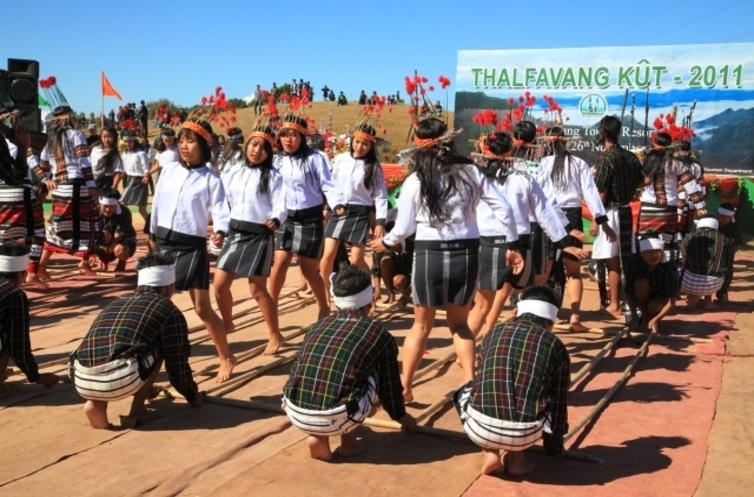 Thalfavang Kut festival is reckoned as one of the most significant festivals in Mizoram. The festival marks the time of the year when the weeding of the farm lands in Mizoram is completed by the cultivators. The tribal groups across Mizoram participate in various cultural events td during the Thalfavang Kut festival. Vibrant dance costume and sumptuous feasts are the major highlights of the festival. It is also an opportunity for the tribal communities living in the far flung corners of Mizoram to represent their inherent cultural characteristics.

In a way, Thalfavang Kut is not only a festival but also a chance to showcase the hidden cultural traits of the tribes of Mizoram. 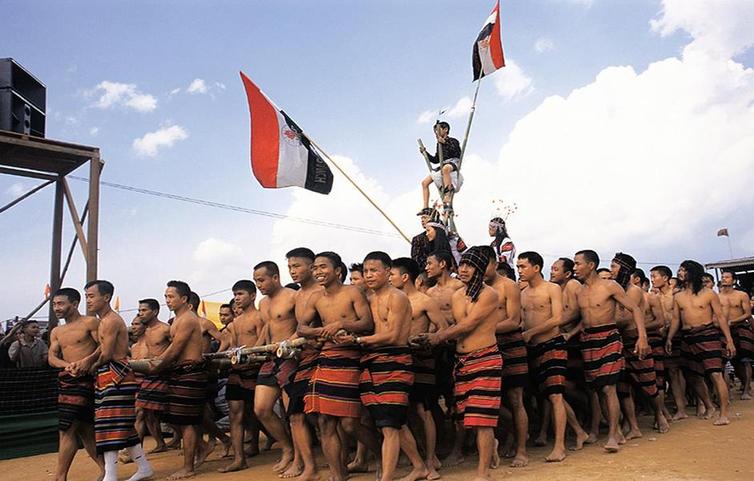 Pawl Kut in Mizoram is a colorful harvest festival and is amongst the famous festivals to see in North East India. This harvest festival is celebrated by performance of ballet, songs and jollity. Pawl Kut Festival in Mizoram is a way of giving thanks to the God for his kind assistance in the harvest of Mizos. The major highlight of the ceremony is the extensive meal consisting of meat and egg. A day is usually fixed for the carnival before the original ceremony, in which men depart for hunting expeditions and fishing trips, during which enough meat is assembled according to one’s capacity. Even the poorest man is supposed to kill at least a fowl for his family. The women of the family are required to prepared hunted dishes. Feeding one another is part of the Chhawnghnawt. In this fiesta the man and women rejoice in Zu drinking that generally occurs in the household of a rich person.

Colourful and culturally rich, these festivals in North East India certainly are the experiences that one can never forget. If you liked our blog, please give us a LIKE and a SHARE. And if you think we should add more festivals to the list, please comment in the box below. Also, if you have made up your mind to travel and witness these lively festivals and are seeking help to plan the trip, then allow Tour My India to help you. We offer incredible North East India tour packages that will not only be in your budget but will also let you explore everything of your interest without having to burn a hole in your pocket. You can call us on +91-8744012088 for more information on the travel package deals or can even write to us on info@tourmyindia.com for other inquiries.