Solving The Enigma: Another Case of Tiger Cannibalism Reported in Kanha Tiger Reserve 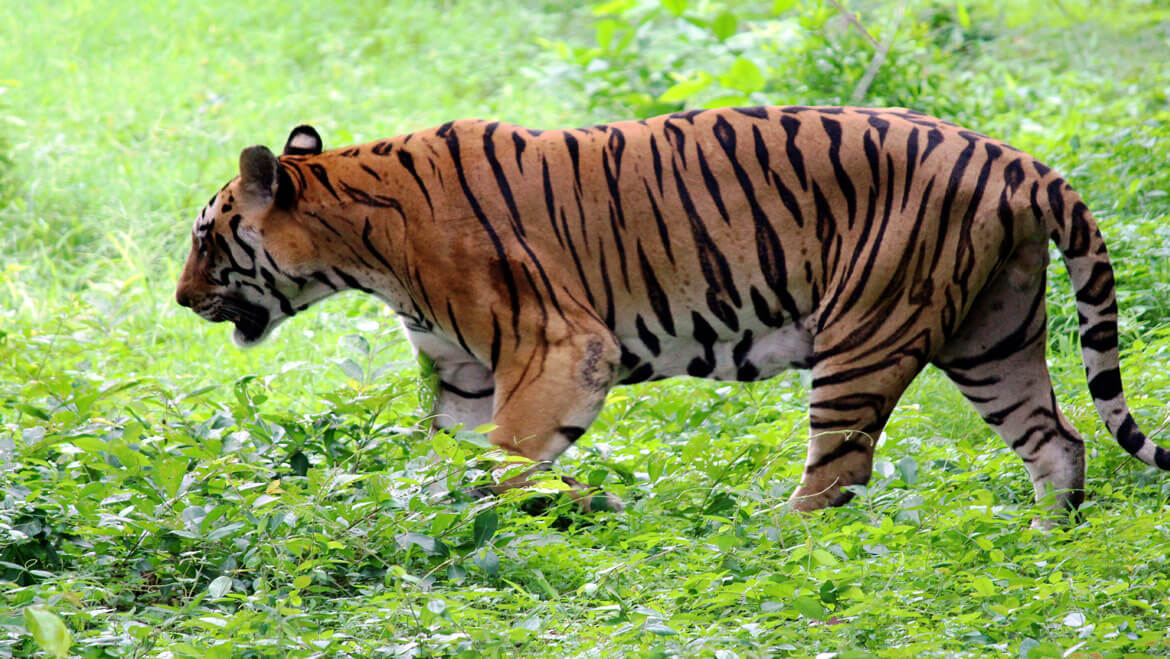 On January 20, it was reported that a tiger carcass was found in the Kanha Tiger Reserve. However, what surprised the forest guards was that only a part of the skull and paws were found, leading to speculation of tiger cannibalism in Kanha Tiger Reserve. However, this was confirmed when another case came to light. On February 27, it was reported that a tiger was spotted feeding on its kill, which happened to be another tiger. Now the third case of tiger cannibalism in Kanha raises serious warning bells for the staff and the conservationists all across the country.

The patrolling party during their regular inspection spotted the carcass of an adult tiger in the Kanha Tiger Reserve. However, the carcass was being eaten by another adult tiger. The carcass is confirmed to be of the 12-years-old tiger T-36 and the one feeding on him is believed to be 8-years-old tiger T-56. The incident was reported in the Magarnala forest area under Kisli zone of the Kanha Tiger Reserve.

The incident was made public by L Krishnamurty, KTR field director. He said that the initial probe of the incident suggests that the tiger was killed in a territorial war, which is not uncommon. He assured that the patrolling party is on guard and they are keeping a close watch on the concerned regions in the Kanha Tiger Reserve.

Is it as alarming as it sounds?

Multiple cases of tiger cannibalism come as a shock to conservationists and forest officials who have been working round the clock to ensure that tigers remain protected. However, one might wonder whether this is an early sign for an oncoming disaster. There is no specific answer to that question. However, it is noteworthy that cannibalism amongst tigers isn’t a new phenomenon. There have been instances of tigers feeding on each other but those are usually in extreme cases. What makes Kanha Tiger Reserve cases special are that none of those extremity applies here.

Why do tigers fall back to cannibalism?

There can be many reasons attributed to cannibalism in animals. First and foremost, reason is the lack of prey. When the number of prey declines in the area, tigers start attacking each other. However, this is not the case in Kanha Tiger Reserve. The other reason that can be attributed to tiger cannibalism is territorial wars, which often results in the death of one of the participants. Big cats often seek big territory for their survival and with the shrinking space, more and more cases are arising pertaining to territorial wars. In such cases, a tiger might feed on the carcass as it is an easy alternative to hunting for prey.

Are tigers alone in the cannibalism cycle?

Recently a report published in Wired was trending on social media and it said that cannibalism isn’t that uncommon in the wild. Species like Hippos, Toads, Sloth Bears and Salamanders shown prominent cannibalistic tendencies. The report also states that the high nutritional value is one of the major driving forces for cannibalism in the animals. The report also attributed sibling rivalry as one of the major reasons. It was also highlighted that many species devour on their male counterparts after or while mating. This report is an indication of the fact that cannibalism isn’t that uncommon as we expected it to be. However, the puzzling factor about Kanha Tiger Reserve is that none of these conditions applies to them.

The prey is abundant in Kanha and so is the territories for big cats. However, despite all the necessary resources available to the Tigers, the big cats are still feeding on each other.