Seven Vows in Hindu Wedding and its Religious and Social Importance 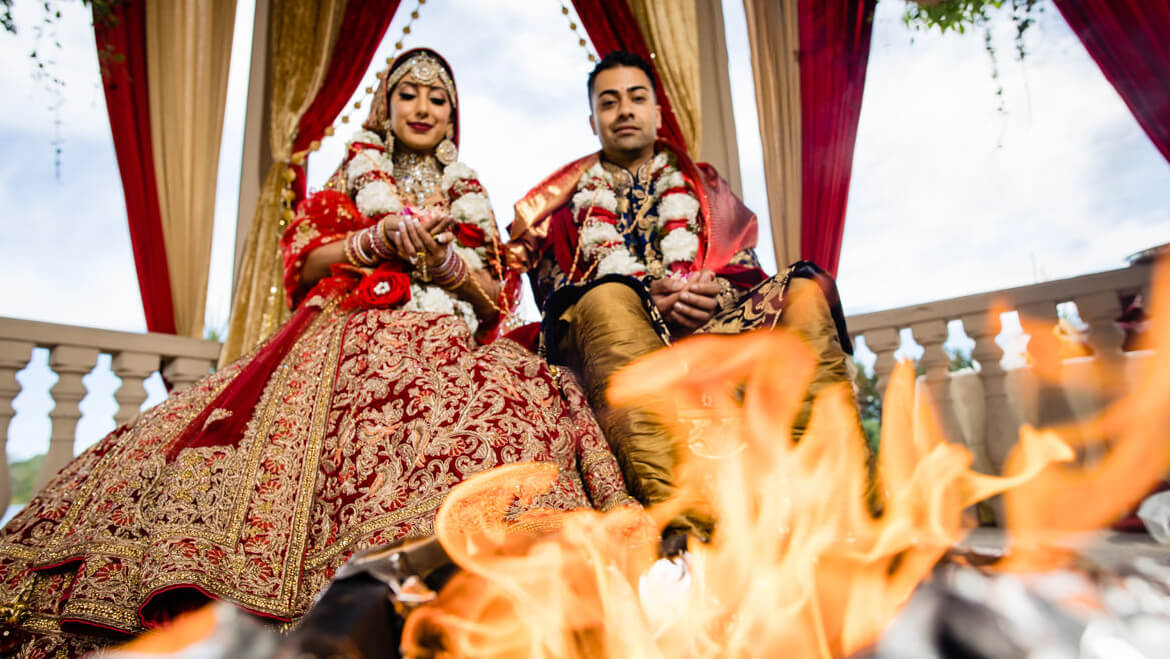 Marriages, around the world in every culture and religion, is considered a sacred institution. The wedding celebrations are always exuberant, even though the rituals and customs vary from each other. Similarly, Hindu weddings are one grand affair with the main attraction being varied rituals and traditions that have both religious as well as social significance. Amongst the most prominent Hindu wedding ritual is ‘seven vows or Saptapadi which are performed along with Mangal Pheras (walking around the sacred fire). Even though the vows were curated ages ago, they have an essence of modern values where couple stand equally and promises each other lifelong companionship. Each pledge revolves the necessary elements required to make the marriage successful and the bond between the partners stronger. Here’s all you should know about the seven vows of a Hindu wedding and its social importance. 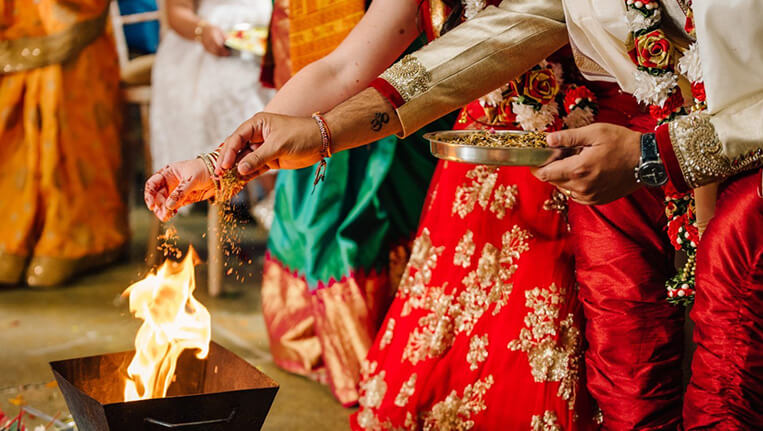 The beauty of Hindu weddings lies in the fact that even the smallest gesture has some cultural or religious significance. For the seven vows to take place, the holy fire is lit using wood, ghee, and cow manure in the havan kund (sacred fireplace). The combustion of wood and ghee is said to protect the ozone layer and doing this during the holy matrimony is reckoned to be a gesture of care towards the environment.

According to Hindu mythology, fire is one of five natural elements (Panch Tatva) that make the human body, and thus, considered important. It is believed that fire is capable of tying the couple in an eternal bond of marriage since fire is one thing that separates them from each other. In Hindu religion, the body is burnt after the death of a person.

The seating arrangement during the seven vows had also been carefully decided. According to Vedas, the bride is initially seated on the right-hand side of the groom; after the completion of the vows, she is asked to sit on the left side of the groom indicating is now closer to his heart.

Hindu Pre and Post Wedding Ceremony and Rituals in India

Now that you have understood the relevance of the ritual, let us move forward to the seven vows and what they mean: 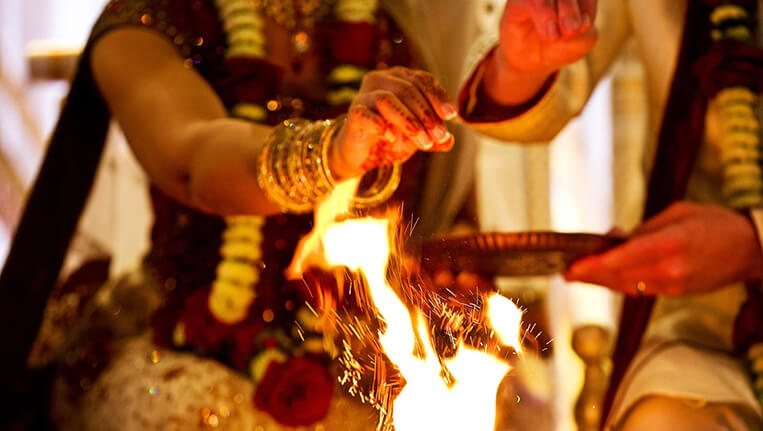 In the first vow, the groom says I will provide welfare and happiness for you and the children that we bear and you shall offer me food and help whenever it is required. In response to this, the bride promises to be responsible for the complete household management.

The vow beckons the willingness of both the partners to bring prosperity in their lives; each is agreeing to fulfil their respective role. 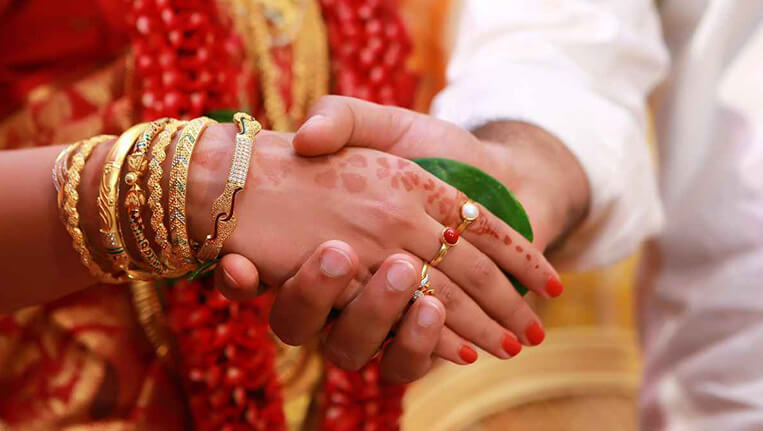 In the second vow, the groom says that together, we will protect our children and home, and the bride in return promises to stand with her husband as his strength and courage. She pledges to rejoice in his happiness and in return, demands him to be loyal to her.

The second vow is where the couple seeks union on emotional, mental, and spiritual levels. Since they will be partners, they seek strength for protecting each other through all phases of life. 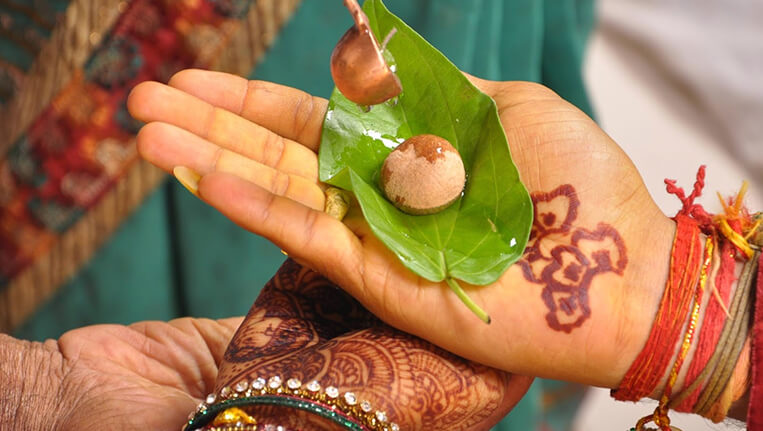 In the third vow, the groom hopes for a wealthy and prosperous future for both of them and their children. The bride responses by giving an assurance of staying loyal to her husband and putting every other man in her life as secondary.

The third sacred vow of Hindu wedding is where the bride and the groom pray together for wealth and prosperity and promises to fulfil their spiritual obligations. They also seek blessings for the ability to educate their children and look after all their needs. The vow beckons physical and spiritual loyalty of the bride and groom towards each other throughout their lives. 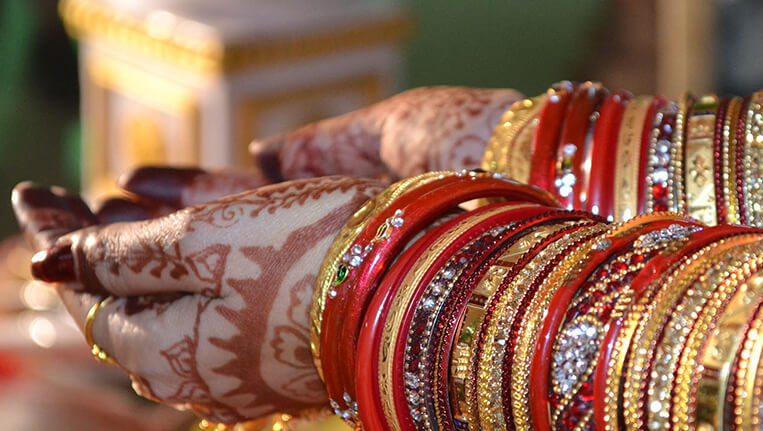 In the fourth vow, the groom declares to the bride that she has made her life complete and promises to respect her. He hopes for their children to be obedient and noble. He also hopes for a long life of their children and expresses interest in striving for their education. The bride promises her husband to shower with joy and happiness and do everything possible to please him.

The fourth vow of the Hindu wedding ritual indicated the importance of a family in Indian society. The couple pledges to strengthen their family together by upholding family values. The couple also expresses gratitude towards each other as well and seeks blessings for their future progeny pray to be noble and obedient. They also vow to be responsible parents to the children and provide them with education and correct upbringing. 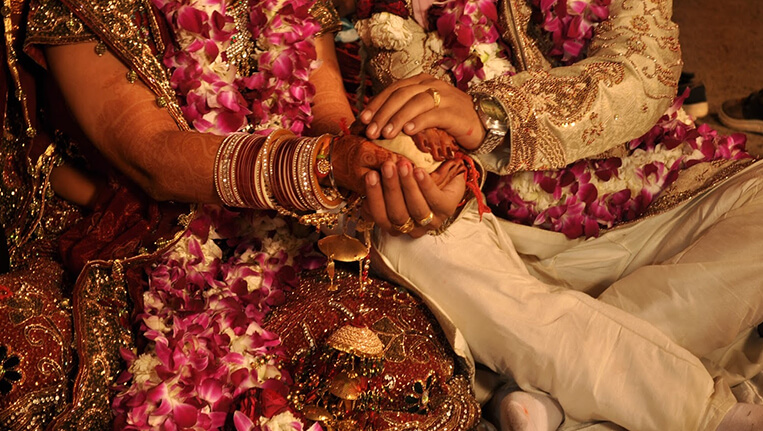 The fifth vow of the wedding beckons the importance of loyalty and dependency on each other. The groom expresses his gratitude and calls the bride his best friend, whereas, the bride, in return, promises to love and cherish their relationship forever. 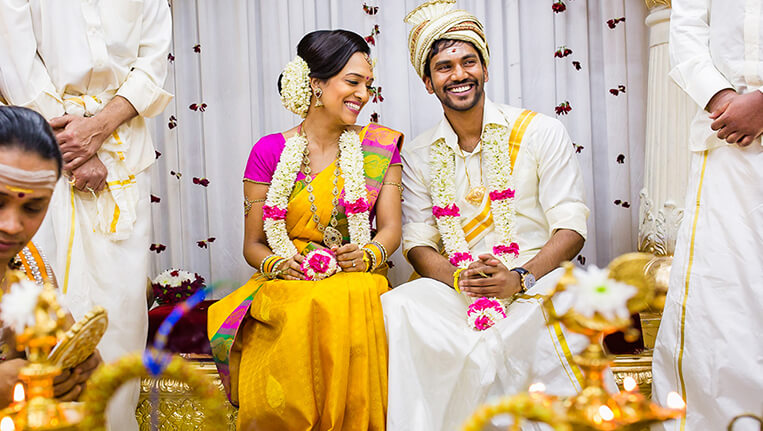 In the sixth vow, the groom says to the bride “Now that you have taken six steps with me and I am delighted. Would you promise to fill my heart with the same happiness for the lifetime?” To this, the bride promises to be by her husband all her life. Together they pray to seek the blessings of God to bestow them with a long and healthy life that is replete with peace and prosperity.

The sixth vow gives the groom the opportunity to tell his bride the depth of his happiness to be able to find her. The bride affirms her affection towards the groom promises to stand by him forever. This vow also beckons the importance of health, peace, and prosperity in one’s life. 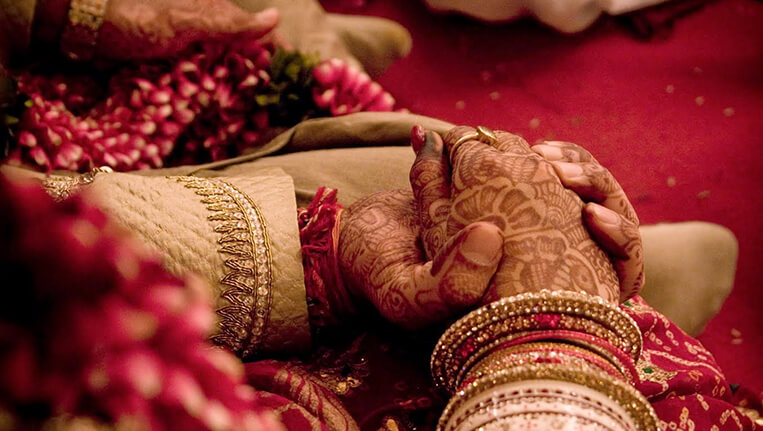 In the seventh and last vow, the groom declares “we are now husband and wife, and now we will stay together for eternity.” In its reply, the bride says that with God being the witness, she is now his wife and says that both of them will cherish and honour each other forever.

The final vow that beckons the completion of the holy union is sealed with a pledge of being companions for life. The couple promises to stand by each other and be true in their relationship always. The oath of loyalty and the willingness to spend a life with not another human being but with a friend, are the things that make the last vow a special one.

Hindu weddings are the reflection of the rich culture, and thus, to savour the opulence of this, you need to be part of a wedding in India. You’d be surprised to see different wedding rituals being performed in different parts of the country, while some rituals are common in almost every Hindu wedding. To get a better experience of it, a trip to India is a must!