Journey Through the Mountain Railways of India 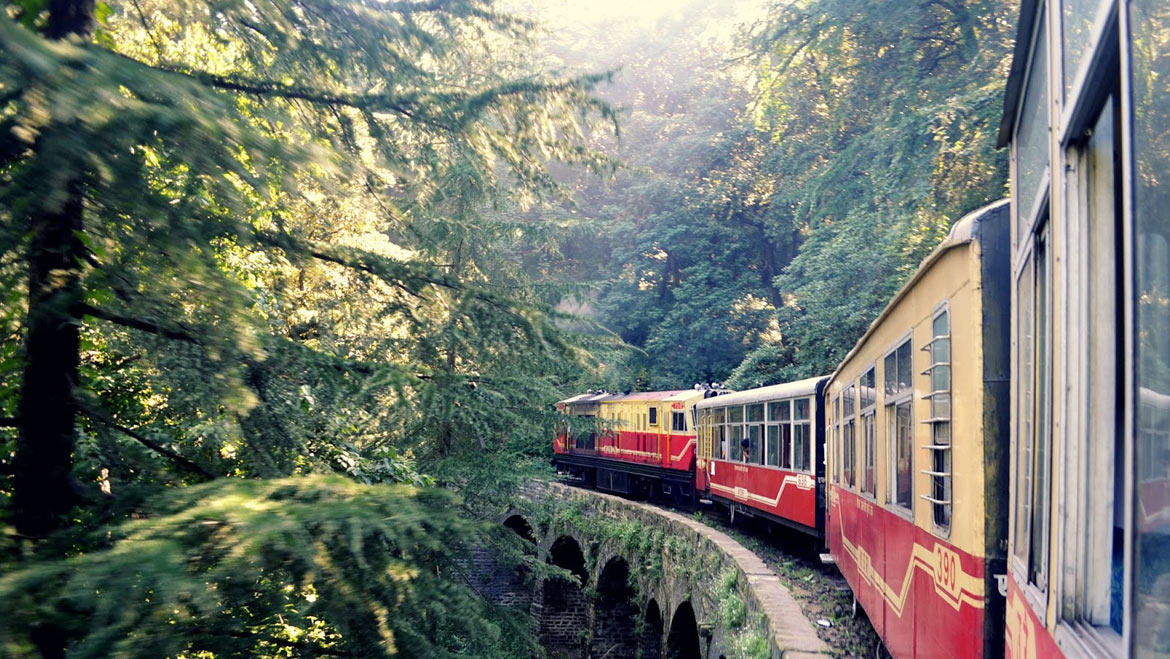 India’s three most visited scenic hill stations that attract both adventurers and leisure escapers are Darjeeling in north of West Bengal, Shimla in Himachal Pradesh and Ooty in Tamil Nadu. Although these hill stations can be easily accessed by road, yet the launch of mountain railways in India that date back to the late 19th century, today knocks the minds of several tourists to undertake a unique journey. Darjeeling, Shimla and Ooty being the summer retreats during the British era… have influenced a lot in the development of mountain railways. The main motive during the British Raj on the establishment of mountain railways was to connect the Himalaya and other mountain ranges with the rest of India. Over the years, with the growth of Indian Mountain Railways and Indian Tourism, the Darjeeling Himalayan Railway, Kalka-Shimla Railway and Nilgiri Mountain Railway started gaining in importance and were together declared as UNESCO World Heritage Site.

Let us now take a trip through the mountain railways in India from this article: 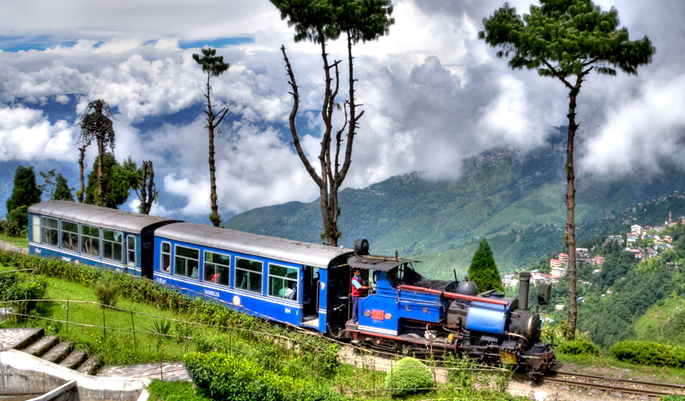 Swirling through the lush green rolling hills of Lesser Himalaya in the state of West Bengal, from New Jalpaiguri to Darjeeling, the journey on Darjeeling Himalayan Railway is one of the entrancing experiences for tourists from all over the world. Also known as Darjeeling toy train, it is a narrow gauge railway that runs for 80 kilometers cutting through cascading tea gardens and ascends steeply through several riveting loops and reverses. The journey as it snakes through the Batasia Loop, which falls in between Ghum at 2,258 meters and Darjeeling at 2,050 meters, unwraps a breathtaking panorama of the valley and Mount Kanchenjunga in the background. The route from New Jalpaiguri to Darjeeling via Siliguri, Kurseong and Ghum also passes over 5 major and approximately 500 minor bridges

The Darjeeling Himalayan Railway that was completed in 1881 is now listed as a UNESCO World Heritage Site and operates a number of tourist train services. The “Daily Train Service” that departs from New Jalpaiguri at 9 a.m. and arrives in Darjeeling at 4.15 p.m has sorted combinations of first and second class carriages and is drawn by “B” Class steam locomotives. On the other hand, Joy Rides and Jungle Safari Holiday Trains respectively run shorter routes. From Darjeeling to Ghum return and Siliguri Junction to Sukna return, the Joy Rides offer the tourists the chance to experience a memorable Indian mountain railway holiday passing through several tea estates and other tourist sites. Whereas, only on the weekends and public holidays, the Jungle Safari Holiday Trains run from Siliguri to Tindharia return, with the highlights being views of the picturesque Mahananda Wildlife Sanctuary and “Z” reverses. 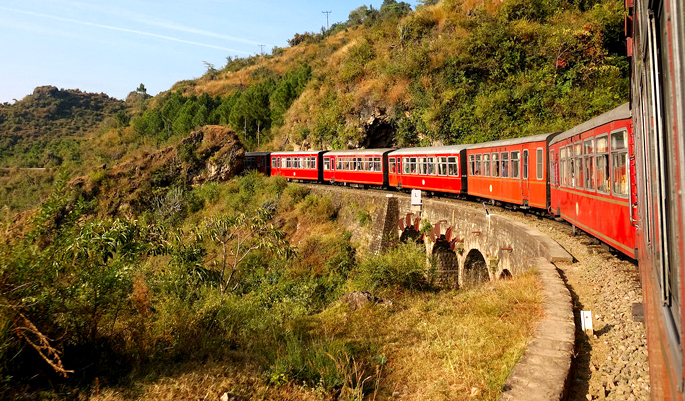 Winding its route steeply upwards along the narrow gauge through the mysterious pine forests of the Himachal Himalayan region, the Kalka-Shimla Toy train is yet another historical mountain railway in India. Built by the British in 1903, connecting Kalka and Shimla, the route runs 96 kilometers and passes through 20 railway stations. With 102 tunnels, 800 bridges and amazing 900 curves on its route, the Kalka-Shimla toy train operates three main tourist train services.

Taking a trip on the Shivalik Deluxe Express is equally worth like one of the luxury train holidays in India. With carpet, wide glass windows that can be opened, cushioned seats, pleasant music and food service… the Shivalik Deluxe Express without any stoppages departs Kalka at 5.30 a.m and arrives in Shimla at 10.15 a.m. On the other hand, the Himalayan Queen that departs Kalka at 12.10 p.m. and having frequent stoppages is perfect for those who like to get out and explore. Whereas, the Rail Motor Car, which is a temporary service that runs only during holiday rush, is yet another express service having one stop at Barog that departs Kalka at 5.10 a.m. 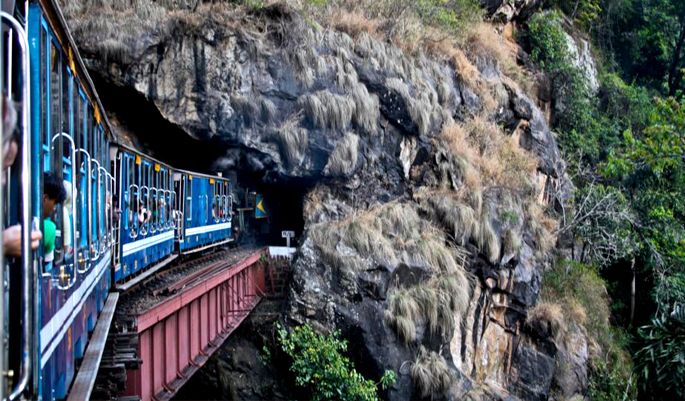 One of the major tourist attractions in the Nilgiri hills that connect Metupalaiyam to Udagamandalam (Ooty), is the Nilgiri Mountain Railway. The 46 kilometers long narrow gauge track via Coonoor snakes through the picturesque forested hills and tea plantations. It passes over 26 viaducts, 16 tunnels and several bridges making it one of the fascinating mountain railway holidays in India.

The historic railway line was completed in 1899, 45 years after the first plans were drawn. Today, the train operates an ‘X’ Class Switzerland-made steam locomotive and pulls quaint blue and cream wooden carriages with first class and second class seating. It leaves Metupalaiyam at 7.10 a.m, and arrives in Ooty at noon. On the return journey, the train leaves Ooty at 3 p.m. and reaches Metupalaiyam at 6.35 p.m. The train is scheduled to match the timings of Nilgiri Express, which travels from Chennai to Metupalaiyam.

Matheran Hill Railway… a journey through One Kiss Tunnel 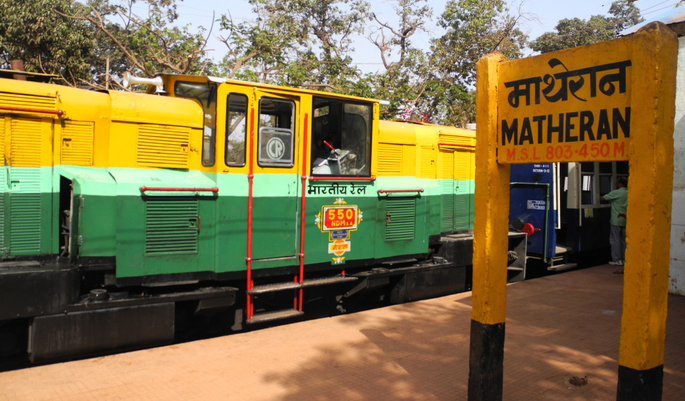 Built between 1901 and 1907, the Matheran Hill Railway is a heritage railway in Maharashtra that covers a distance of 20 kilometers through a swathing forest territory and connects Neral with Matheran. Although a very short journey yet the Matheran Hill Railway is one of the toy train journeys in India that uncovers the beauty of the Western Ghats and has several unique features on its route. The horseshoe embankment, Herdal Hill section, Bhekra Khud steep gradient, One Kiss Tunnel and Panorama Point are the major attractions on the Matheran Hill Railway. The route from Neral passes through Jummapatti, Water Pipe Aman Lodge and finally Matheran.

Kangra Valley Railway… tracks through a maze of hills 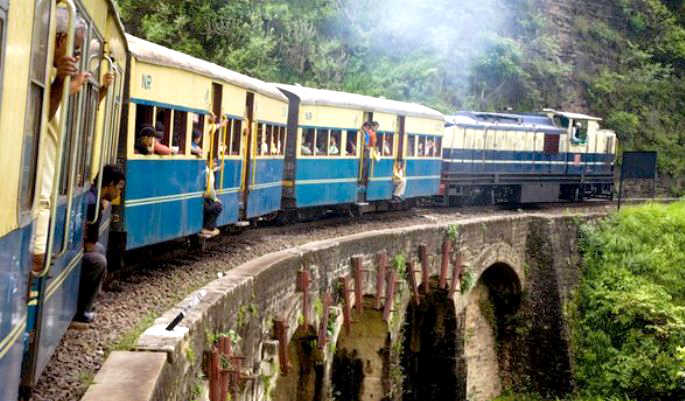 The Kangra Valley Railway that covers a distance of 164 kilometers from Pathankot Junction to Joginder Nagar via Jawalamukhi Road, Kangra, Nagrota, Palampur and Baijnath Paprola mostly operates passenger trains. This narrow gauge railway section in Himachal Pradesh is a designated world heritage site that was commissioned by UNESCO in 1929. The highest point on this line is at Ahju station at an elevation of 1,290 meters and the route snakes through only two tunnels. The journey also presents to the traveller, a chance to capture the lasting panorama of snow-clad ranges and lush green fields. The most picturesque part of the valley is unwrapped at the stretch from Mangwal to Kangra and thereafter from Palampur where from you can catch a glimpse of Dhauladhar Range.

A part of the Northeast Frontier Railway, Limding-Halflong-Badarpur hill section is also considered as a part of mountain railways in India. The meter gauge track on the Lumding-Silchar line has 37 tunnels, 586 bridges and 24 stations with the steepest gradient of 1 in 37 on the Harangajao–Jatinga section.