Top 13 Must See Festivals & Events in December in India 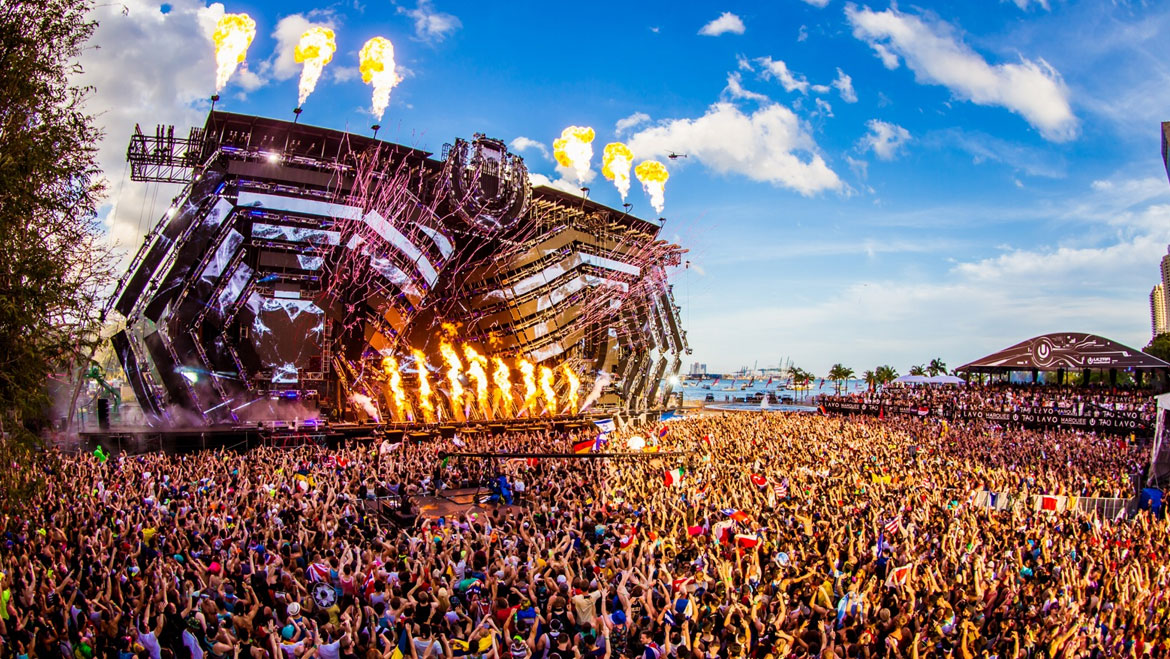 When it comes to December, there is this strong urge to plan a visit to a place that is celebrating a festival or has organized a fair, you know to get into that holiday season mood. And I guess, India is one of those places where you can actually make the most of this month since the celebrations in the country never stops. Party animal, classical music lover, culture aficionado or a movie fanatic, India in December has something for everyone. There’ll be the famous tribal festival of Kohima, the winter festival in Mount Abu and Kasol and then for the classic music and dance lovers there are numerous classical dance festivals and music festivals in the South India. December month also presents a jam packed line-up of EDM and House music with Sunburn being organized in Goa. There are also events organized on the New Year’s eve for the perfect end of the near perfect year. Mark your calendars because it looks like a packed schedule of festivals and events in December 2020. So, mark your Indian festival calendar because we have got a festival guide 2020 made especially for you.

The month of December 2020 in India would bring to you: 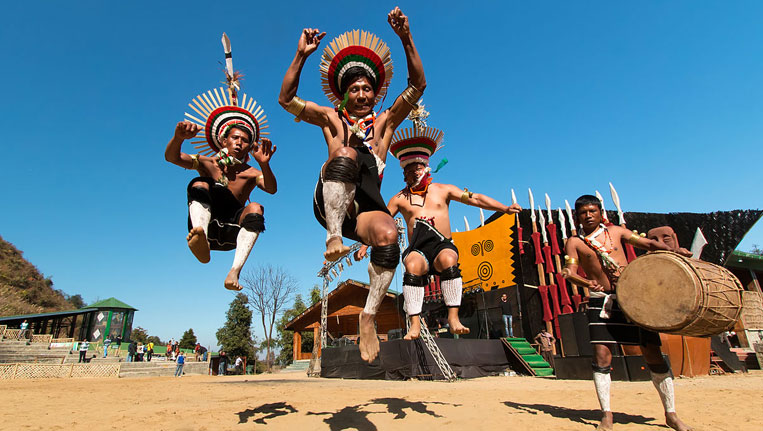 Hornbill festival is a music festival hosted every year by the Department of State Tourism, in the first week of December. One of the major international tourists’ attractions in North-East India, Hornbill festival boasts the unexplored Naga culture. Tribes from all across the state of Nagaland showcase their tribal dance and music. The events of the festival includes a Hornbill rock contest, Naga chilli eating contest, Hornbill motor rally competition, beauty pageants for Miss Nagaland and famous Hornbill literary festival. A festival of pride for Naga people, this music festival of India attracts many tourists seeking an insight into the tribal lifestyle.

Where to Go for Christmas & New Year Holidays in India? 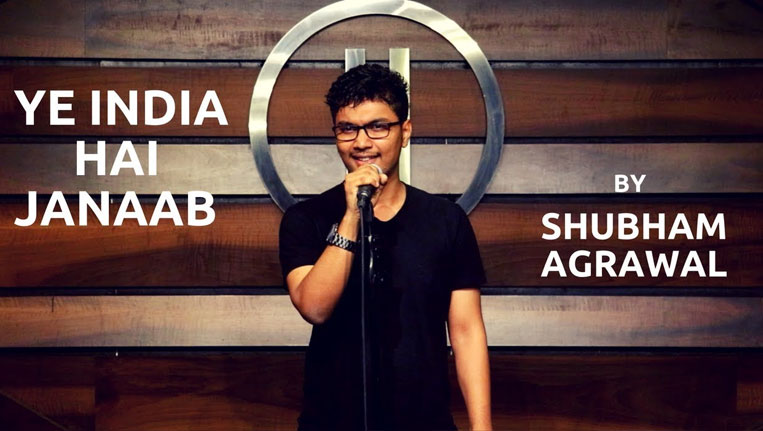 For all the poetic souls out there, Dialogues Cafe will be is organising an open mic for all the poetry enthusiasts. A big hit amongst youth, this event is likely to witness some of the most amazing indie poetry sessions. So, if you write and want to share it with the world this is the place and stage for you.

When and where: January 12, Dialogues Cafe, JP Nagar 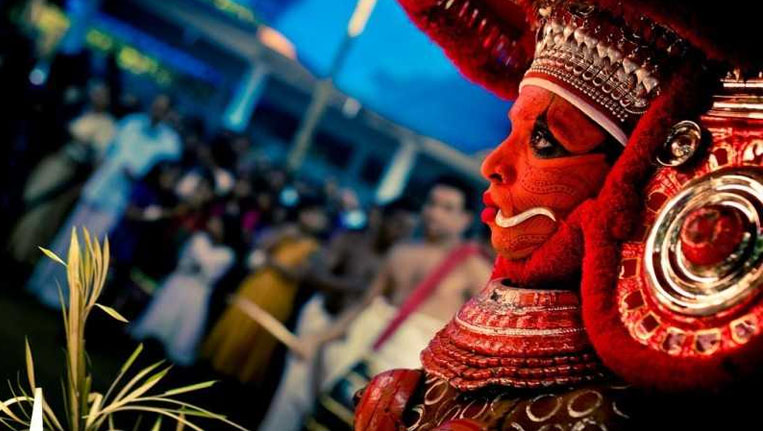 A feature for the classical dance lovers, this popular festival of India is one of the most anticipated festivals in December. Showcasing more than 400 dance forms, this Southern India dance festival resonates with the artistic history of Kerala. One of the major showcases is the Theyyam dance form where each dance form performed by artists represents a mythological character. If you are planning to one of the best tourist destinations in India, Kerala, this December than this festival should be on your Indian festival calendar.

When and where: Dates not available, Kasargod 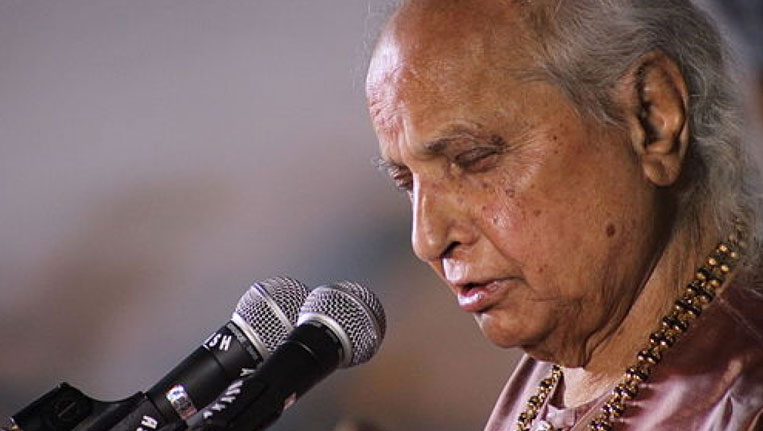 Started by revered musician Pandit Bhimsen Joshi, the annual festival of Sawai Gandharva Bhimsen Mahotsav has been a pride of Pune since its inception in year 1953. Organized every year by the Arya Sangeet Prasarak Mandal, the classical music festival features some of the legendary musicians like Pandit Debashish Bhattacharya, Pandit Hariprasad Chaurasia and many more. For the classical music lover, this is one of the biggest musical festivals in December. 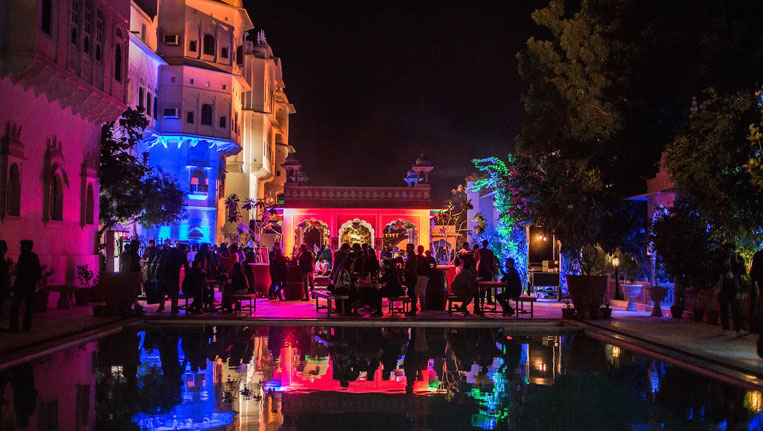 Festival of contemporary art and music, Magnetic Fields is the festival for your visual as well as sensory delights. Three epic days of musical magic, food and art make it one of the most awaited festivals of India that takes you through the exotic locations of Rajasthan like that of the grand Alsisar Mahal in Shekhawati. Placed ideally between the triangle of Jaipur, Delhi and Bikaner, this festival is a major international tourists puller in Eastern India. Packed playlist of latest music in the country, this music festival is a cross-cultural magic of Rajasthani music and modern music.

When and where: December 13-15, Shekhawati 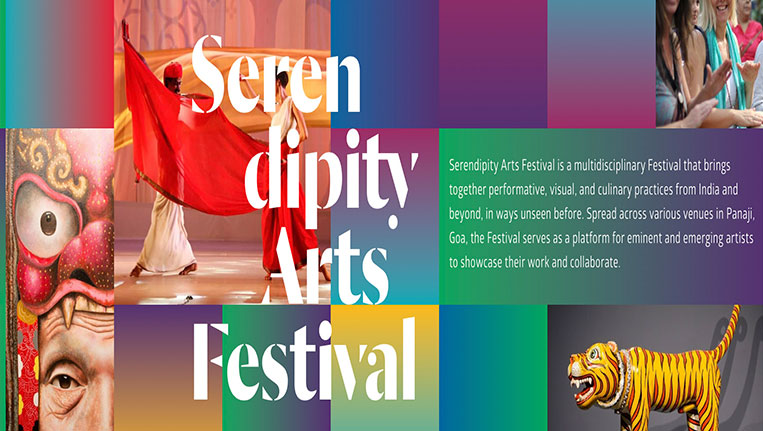 A multi-themed festival showcasing performative, visual, and culinary practices from all across India, Serendipity Art Festival, also known as SAF, is one Indian festival you wouldn’t want to miss. Organized in the Goan city of Panaji, the festivals offers enthusiasts from all across the globe to participate and showcase their abilities. Resonating with the Goan culture, this art festival in India will offer you a chance to try out a variety of cuisines. 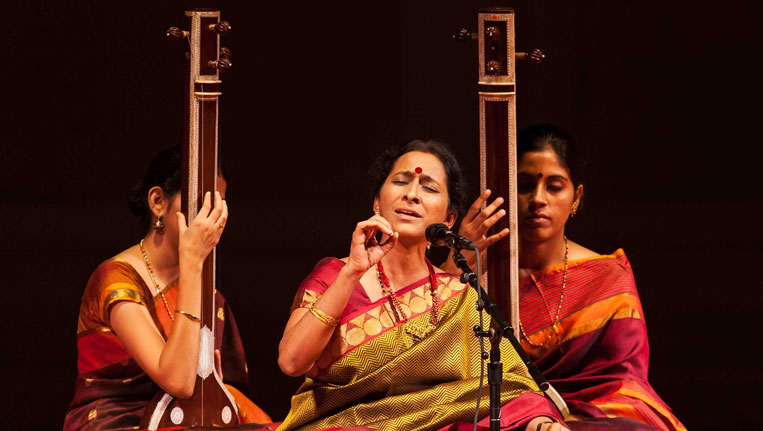 When and where: December 15 – January 01, T. T. Krishnamachari Auditorium, Chennai

What to Buy for Your Friends and Family as a Christmas Gift? 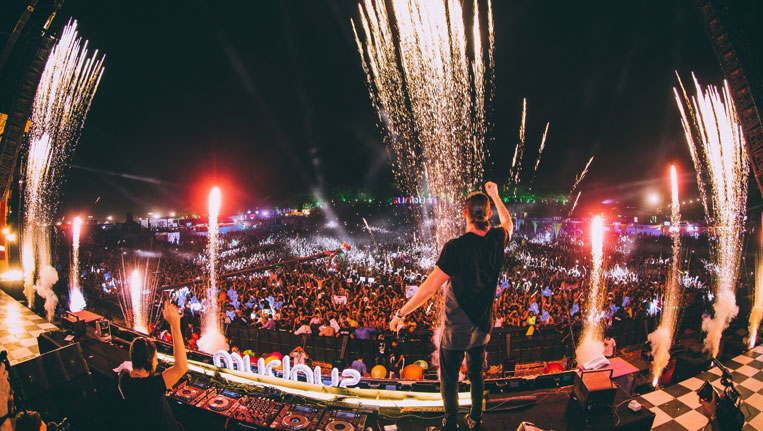 Nothing makes your adrenaline pump like a Sunburn concert. India’s most popular music festival is back with its December gig in Goa. Packed with artists like Martin Garrix and The Chainsmokers headlining the event, Sunburn is the dream of every EDM fanatic.

When and where: December 27-31, Vagator Beach, Goa 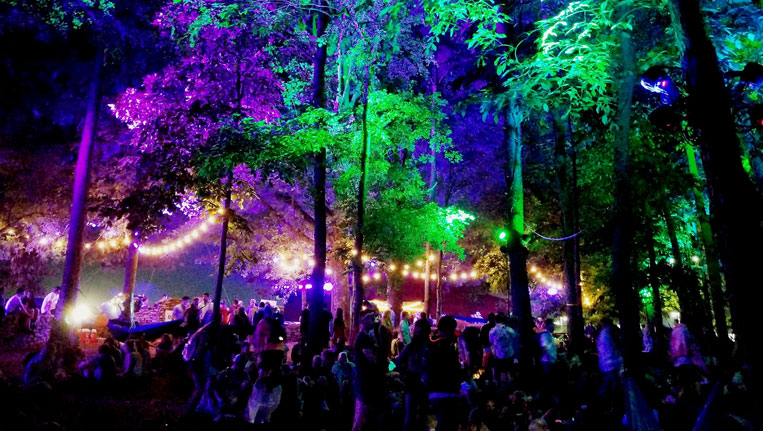 For those seeking new year celebrations in the Himalayas, this popular winter festival is for you. As the sun sets and the cold wind blows, the valley of Kasol becomes musical on its own, but fuse it with some real music and you get the most fulfilling new year celebrations. One of the best places to visit and a popular tourist destination, Himachal hill fest offers the best of desi and videshi vibes. Apart from chilling in Kasol, one of the best things to do is to trek to Chalal and witness the rural beauty of Parvati Valley. 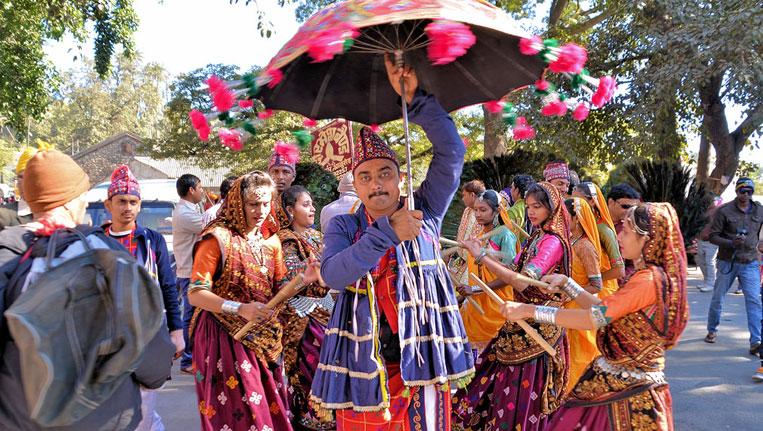 Planning a family trip and thinking of going to a top tourist destination? We have got a perfect itinerary for you. Happening at the end of the December, the Winter Festival at Mount Abu would go perfectly with your Christmas and New Year holiday. The awaited winter event of India, the festivals organises a procession to the Nakki Lake with traditional dancing and concerts. Started by a joint venture between Tamil Nadu Municipal Board and Department of Tourism Rajasthan, the festival showcases traditional dance forms like variety of Daph, Ghoomar and Gair. Apart from dance performances, sports competition like cricket matches and rowing events are also organized. If you are planning to visit popular fairs and festivals, this has to be on your bucket list. 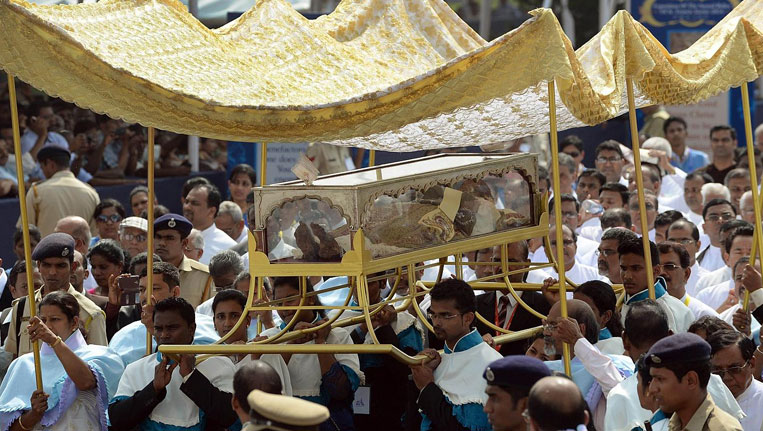 In honour of St. Francis Xavier, a Christian missionary who came to India, an annual festival is held in the town of Panji. It is believed that his body was mummified and preserved in a casket at the Bom Jesus Basilica, in old Goa. On the day of the festival, which continues for several days, a morning mass is held to celebrate the anniversary of his burial. One of the most popular fairs and festivals, Feast of Francis Xavier offers you the feel of Goan culture with feasts and fairs being organised.

When and where: December 03, Panaji, Goa

25 Must Visit Churches in India 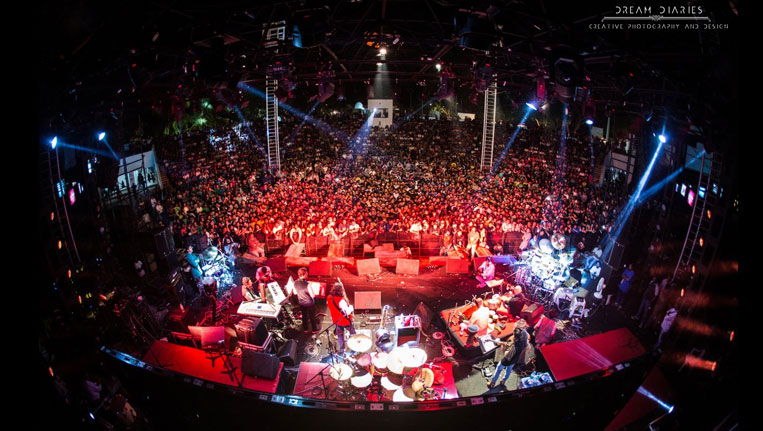 The annual college festival of IIT Bombay is one of the most awaited and must see festivals in India. Held every year, the college festival has gone on to become a major crowd puller. Thousands of students and locals of Bombay come every year to witness three nights of music, dance and euphoria. Mood Indigo features some of the leading musician of the Hindi Film Industry with music bands like Euphoria and The Local Train being a regular part of the event. Not just for students, this annual festivals is one of the top things to do for every Mumbaikar. 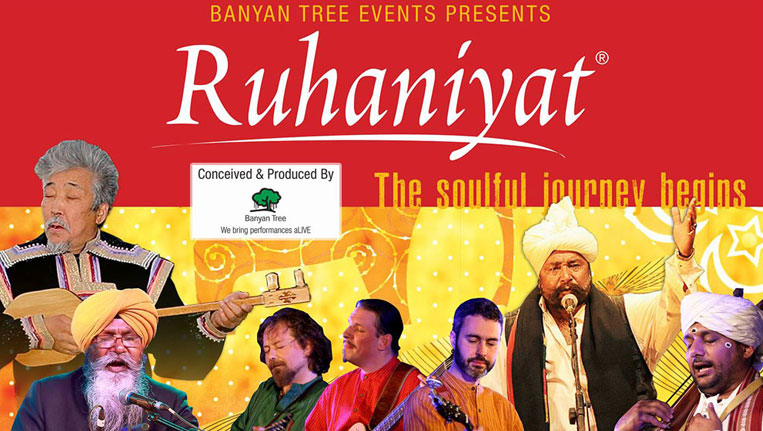 Into its 17th year, this musical group comprising of Sufi singers, Qawwali singers, are a treat for music lovers. Every year the group tours from November to February, all across India, giving platforms to various desi and international singers. This Indian musical festival is a bridge between the music of the past and the music of the present which is seeking to establish itself. The mesmerizing tapestry of music, the festival features masters of various art forms, ranging from sufi singers, qawwals, healers, story-tellers.

When and where: November 23 to February 09, across India

Be it Christmas and New Year Celebration or popular winter festival we have covered it all for you. All you need to do is plan a trip and we have made a list of all the celebrations in india in the month of December. Be it North India, South India or West, there is a major event happening in every part. So pack your bags and we will see you at one of the major events, this December. And if you’re looking for such adventure tours in popular tourist destinations like this, you can contact us at Tour My India on +91-9212553106 or send us your queries at info@tourmyindia.com and we’ll get back to you with best travel packages where you can pick the one that suits you the most. For any queries, feel free to post your questions in the comment section below.