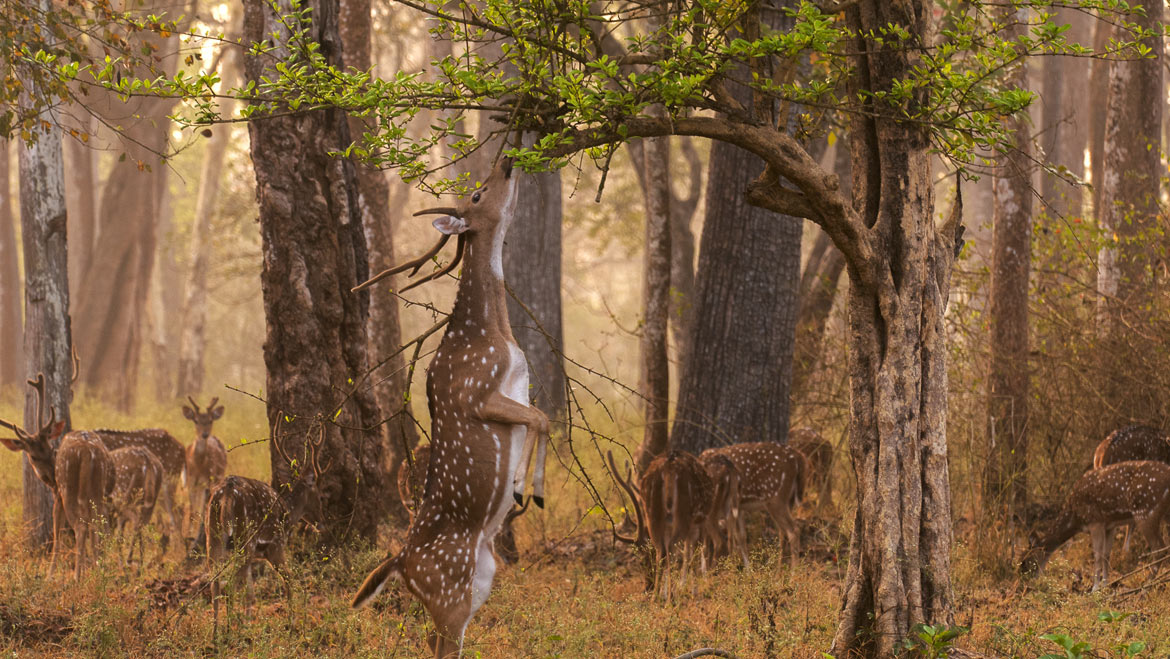 A paradise for the wildlife enthusiasts, India attracts globetrotters from across the world to spend their holidays in utterly wild charm. To protect the most exotic and endangered species of flora and fauna, the country has set up several national parks and sanctuaries that can be explored by an exciting elephant ride or a lively jeep or canter safari. For instance, if we consider the southern part of the country, a couple of awe-strikingly beautiful national parks welcome you in their densely covered forests to satiate your thirst of meeting animals like tiger, elephants, sloth bear and leopards in good number. To maximize the chances of spotting these animals you should visit Nagarahole National Park, one of the most popular wildlife destinations in India.

Nagarahole at a Glance

Named after the lively River Nagarahole in Karnataka, Nagarahole National Park is an enchanting getaway for the nature worshippers. Popularly known as Rajiv Gandhi National Park, this reserve forest is located in two famous districts of Karnataka, namely, Kodagu and Mysore. A significant part of the Nilgiri Biosphere Reserve, this national park constitutes one of the largest protected areas in South India along with Wayanad Wildlife Sanctuary, Mudumalai and Bandipur National Park (2183sq km altogether).

Inhabited by diverse species of wildlife and coated with verdant forests this wildlife reserve finds its position among the most undisturbed national parks in the country and appears to be the perfect getaways for wildlife photographers, birders as well as regular wildlife enthusiasts from round the globe. Set over an area of around 643 sq km, this reserve forest is flanked by the Nagarahole River and Kabini Lake from different sides and encompasses lush forest cover, small hills, waterfalls, valleys and streams within its boundary.

A rich amalgam of verdant forest and exotic species of animals are found in its protected areas. The forestry of this reserve provides expensive woods like teak, rosewood and silver oak. Chances of sighting exclusive varieties of animals are also quite high.

The most exciting part of Nagarahole National Park is the dense population of herbivores which is around 108 animals per sq km. During summer a sizable population of elephants can be seen here roaming in groups. For birders the reserve is home to around 300 species of birds which is a delight for any wildlife lover. Wildlife safari tours are organised twice in a day that brings chances of sighting animals like leopard, tigers, sloth bear, slender Loris, Male Gaur, Sambar, Chital, giant flying squirrel, porcupine and several other mammals. The denser part of the reserve also houses important species of reptiles such as common vine snake, bamboo pit viper, rat snake, Russell’s viper, common krait and Indian rock python.

The vegetation of Nagarahole National Park is mostly of moist deciduous nature. However, in some parts you can also see Central Deccan Plateau dry deciduous forests and sub-montane valley swamp forests. The southern part of the forest witnesses rich vegetation of rosewood and teak whereas in other parts a large number of the highly beneficial species of sandalwood and silver oak can be seen. In the dry deciduous category, tress like Lagerstroemia lanceolata (Crepe myrtle), crocodile bark, Indian Kino Tree, Grewia tilaefolia and axlewood are the most significant. Among the commonly found species Flame of the Forest, golden shower tree and clumping bamboo are most significant.

Where to Stay in Nagarhole National Park?

The enclosing areas of Nagarahole present exclusive staying options as per the budget and class you are looking for. So, if you are worried about where to stay in Nagarahole National Park, the luxury resorts like Kings Sanctuary Resort, Kabini River Lodge, Orange County Kabini, Water Woods Lodge & Resorts and Jungle Inn Eco-Friendly Resort are counted among the best. Among the budget category, Punchwati and Jungle Inn are amongst the best budget hotels and resorts in Nagarole National Park.

If you are in Nagarahole for a vacation and left with enough time, plan for a short trip to Papanasini River where the Thirunelli Temple, the seat of Lord Vishnu, is located. The temple is around 37km from Nagarahole and appears to be one of the popular tourist attractions near Nagarahole national park. Balle Elephant Camp, Tholpetty Wildlife Sanctuary, Iruppu Falls are some other sightseeing options near Nagarahole.

A tribe called Jenu Kurubas is the primary inhabitants of Nagarahole. They earn their livelihood by collecting honey and gathering woods from the jungle. They consider forest as their mother and their deity. They are experts at climbing trees and live in thatched huts made of mud, leaves and grass. In the recent past they have been charged with the allegations of hunting valuable species of wildlife arbitrarily leaving their traditional lifestyle which used to follow a sustainable policy. They also lead the poachers to hunt animals and that is why the Government of India is trying its best to relocate them.

The Golden Triangle Tour in India

The best time to visit Nagarahole National Park is the period from October to May. During monsoon season (June-September) and the time of mating the park remains closed for the visitors.

Both elephant and jeep safari are arranged here to explore the major attractions of Nagarahole. Safari is available for two times a day, once in the morning from 6 am to 8 am and again in the evening from 3 pm to 5pm.