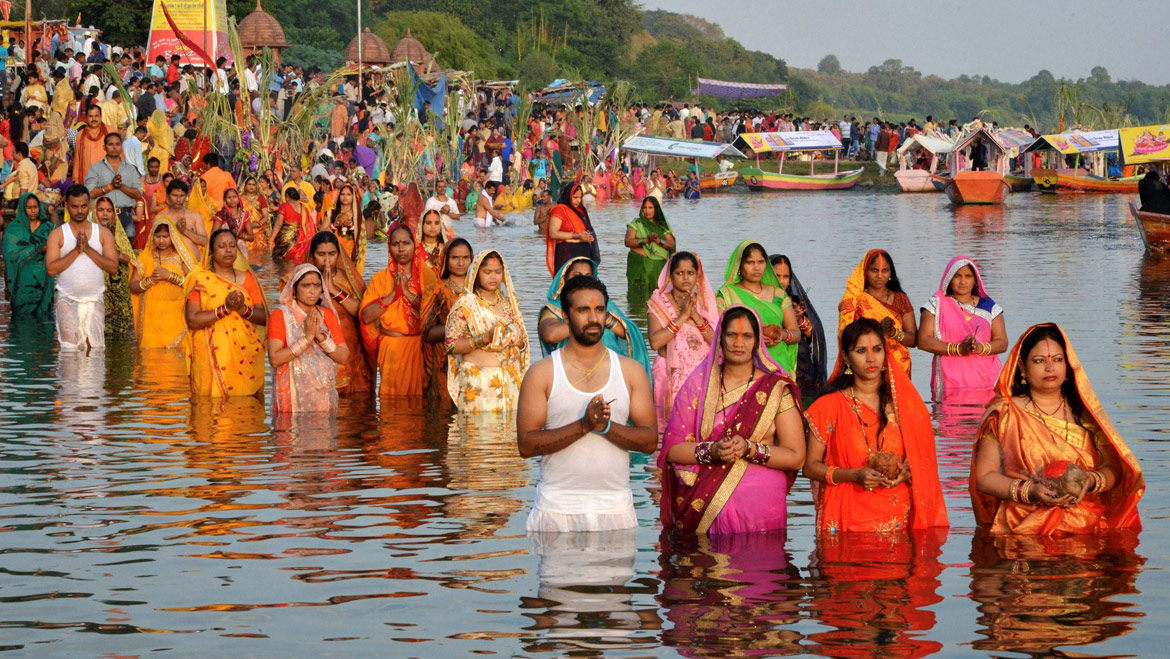 Celebrated in Bihar and its neighbouring states like Jharkhand and Uttar Pradesh, Chhath is one of the major Hindu festivals in India. Revering the Sun God, the devotees offer prayer to the supreme power for taking care of every living being. During Chhath festival, the whole of Bihar engages in the worship of the Sun God and, believe it or not, the scene is visually phenomenal!

Chhath Puja 2020 Schedule at a Glance

Here are a few things that you need to learn about this Chhath celebration:

Chhath is a festival for showing reverence to the Sun God, who sustains life on earth. With this festival, people, especially the women in Bihar put forward their offerings before the Sun God. In addition to this, prayers are also offered for the well being and prosperity of family members.

History of Chhath and Sun Worship

There are many stories about the origin of Chhath festival in India and among them the most popular ones are that Chhath Puja in Bihar was started by the Dwipi-origin Brahmins. The legend has it that King Janaka of Nepal invited Brahmins to perform the Puja of the Sun God. It is believed that the Brahmins derived energy from the sun while they were on fast. So, one can conclude that the religious significance of Chhath Puja is that Sun has the power to cure various ailments and ensure longevity of life.

Another belief surrounding the origin of Chhath Puja is that Queen Draupadi (one of the principal characters from the epic Mahabharata), the wife of the Pandavas observed a fast for the blessing of Lord Surya. According to a legend while the Pandavas were in exile, a large number of hermits visited them. As per the custom, the Pandavas had to feed the hermits but they did not have adequate food. Thus, Draupadi observed a fast and prayed to the Sun God after which their problem was solved. It is also believed that later the Pandavas also fasted and offered prayer to Lord Surya to regain their kingdom.

Yet another version regarding the origin of Sun Worship comes from Karna, who is believed to be the son of Lord Surya. Karna ruled Anga Desh, which is present day Bhagalpur district of Bihar.

The festival is celebrated after Diwali and usually falls in the month of October and November; this period is also known as the Shukla Paksha. Chhath Puja 2020 dates are November 18 – November 21, as it is a three-day festival. Chhath is generally observed by married woman or widows who fast (abstaining from water and food for three days) for the well-being of their children. It has been noticed that men these days also observe a fast on this auspicious occasion.

Chhath is celebrated twice in a year i.e during the summer (After Holi) and during winter (After Diwali). Chhath Puja observed in summer is called Chaiti, while the one held in winter is known as Kartik Chhath. During the celebration of Chhath, Lord Sun is offered prayers twice a day i.e. during sun dawn and before sun set. The first day is called Nahay Khay; the second day is known as Lohanda and Kharna; the third day is Shashthi, which is the day of Chhath Puja and the fourth day is called as Usha Arghaya. Here are the details of the rituals performed on each day:

On the first day of the festival, people observing the fast, take a bath in the river. The food is prepared in pure ghee without the use of garlic and onions. The first day is also called Kaddu Bhat because rice (bhat) is prepared with dal and vegetables.

Women observe fast till evening and perform rituals throughout the day. In the evening, the women break their fast and savour the taste of Kheer, Puri and fruits. After the second day is over a 36 hours fast is observed by the women who are called Parvaitin.

The third day is the day of Chhath, and the women observing fast on this day prepare delicacies that will be used to offer to the river in the evening. The Parvaitin (woman on fast) dresses like a bride for the Chhath Puja.

On this last day of the festival, early morning offerings to the Sun God are made; this ritual is known as the Bihaniya Aragh ar.

Best Places to Visit in India during November Month

Along with the Puja offered to Lord Surya, food is a crucial part of Chhath. Several mouth watering dishes are prepared during this four-day festival amongst which Thekua (dishes prepared using flour and sugar), Puri (Prepared using flour and black cumin seeds), Kheer (prepared with rice along with jaggery, milk and dry fruits) and Pua or Malpua (made with plain flour, jaggery, suji and milk) are the major delicacies of Chhath Puja.

India is a land of diversity and religion is one of them; however, festivals are the single factor that unites people in the country. Not only Chhath but several other festivals like Diwali, Holi and Christmas give people the opportunity to savour the sweet taste of religion, get soaked in colours of happiness and light up the life of each other by sending gifts, forgiving and lending a helping hand. The social significance of Chhath Puja is also the same; today women and men alike observe the fast not only for asking Lord Surya the health of their kids and family but also the prosperity of the country and its citizens. It brings people in perfect unison and endows them with the responsibility of passing this age-old tradition to coming generations.