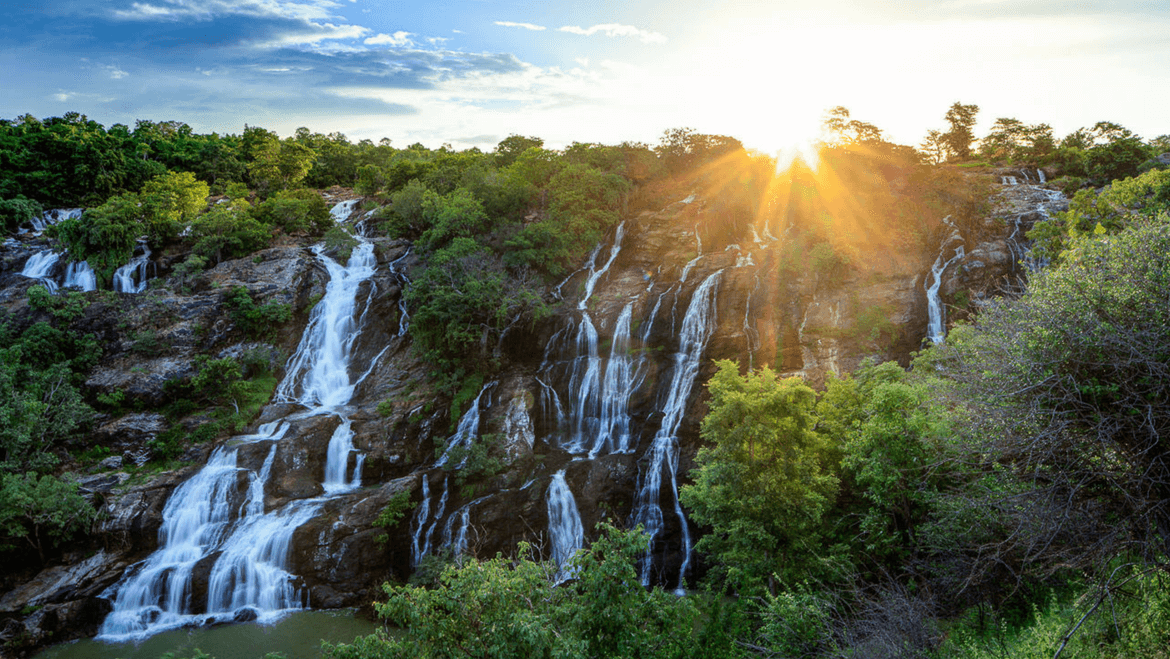 A thing of beauty is a joy forever. When you see the Shivasamudram falls in its full splendor, along with joy, you are awe struck by the bounties of nature.

So one monsoon evening, it was decided to visit this waterfall. And there I was, along with  Subha and Deepayan, on our way to the falls next day.

From Bangalore one may follow the Mysore Road up to Channapattana, then take a diversion to NH 209. However, we took to NH 209 directly via NICE Road. As we started early in the morning, the traffic was thin. By 8 in the morning, we were at Kanakpura to halt for breakfast. The non-descript hotel offering typical south Indian fare had limited options. We had our stomach full of Dosa, Idli and vada followed by hot kaapi. The rural flavor of the preparation distinguished it from that of Bengaluru city hotels.

As you proceed from Bangalore on NH 209, first you would encounter the diversion to Gaganachukki falls. The viewing area is adjacent to KSTDC Hotel. There is sufficient parking space and the area is neat and clean. One can have nice view of the two segments of the Gaganachukki falls from here. One of the hydro-electric plants of Karnataka Power Corporation Ltd.(KPCL) is also located here. The waterfalls never run dry. But they are in their full glory during the monsoons. Unlike many other water falls in Karnataka, people are prohibited to have the experience of getting drenched in the water fall. Even one should not venture beyond the barricades of the viewing points. In the past many fatal incidents have happened when people tried to be a little adventurous defying the safety directives. 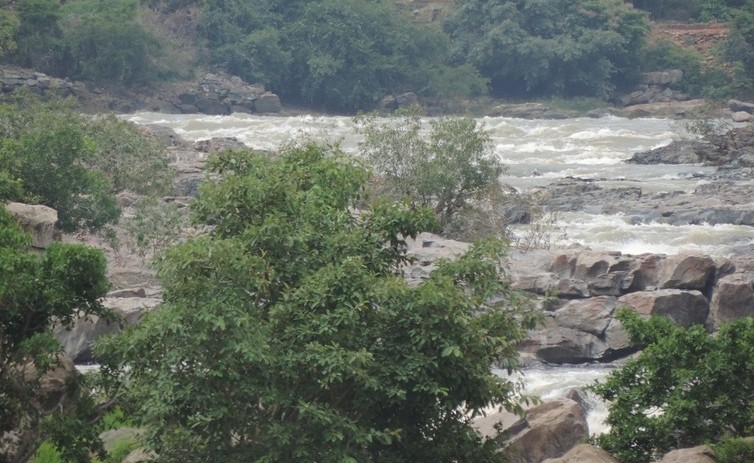 Shivasamudram- Before taking the plunge

One has to come back to NH 209 to proceed towards Bharachukki falls or the temple town of Talakadu (described later in this article). One has to travel a few kilometers to south west to reach Barachukki falls.  One can also view the twin Gaganchukki falls from the other side where Darga Hazrath Mardane Gaib is located. After taking a view of the waterfalls and trying out various angles for our photo sessions, we went to the Dargha side.  However, this viewing area was like a garbage dump. The leftover food of the picnickers, it seemed, was not cleaned for days and the stink  was unbearable. The littered viewing point  from this side was in sharp contrast with the refreshing and beautiful water falls. 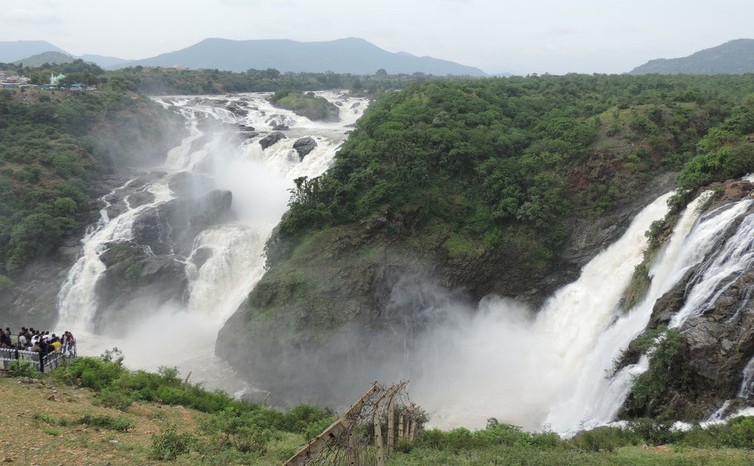 If you are a lover of nature and beauty, you may keep on gazing at the water falls and be awestruck as long as you want without getting bored. However, it seemed most people visited this place only to be selfied or photographed and then dash off to the next destination. Of course those who want to stay at the place may find decent accommodation in the KSTDC run hotel Mayura.

I wanted to stay there longer. At the same time we also had to cover the historic place of Talakadu and return to Bangalore the same day. Subha remarked that even though the stay at the destination  was short, what mattered was the fun of the whole journey. Dipayan added that the more difficult the journey, the more enjoyable the destination. Those who have gone on Amarnath yatra or any long treacherous trek would agree with Dipayan.

Talakad – The Temple Town of Legends, Curses and Mysteries 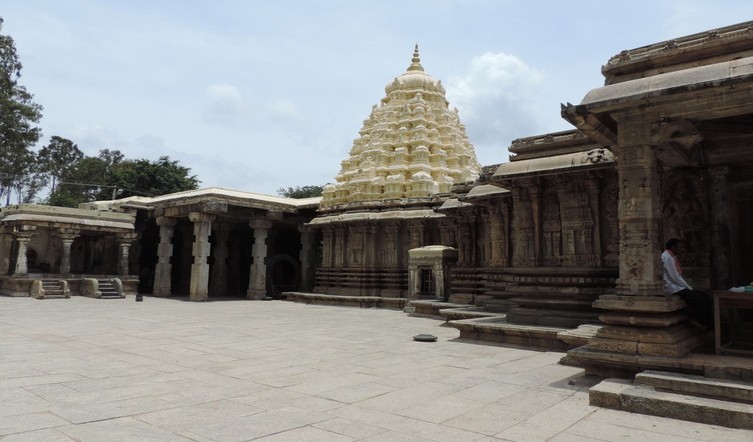 From Shivasamudram falls it is about 30 kms journey to Talakad or Talakadu. On the way back to NH 209 we stopped at the Ranganathaswamy temple. “It is one of the three Ranganathswamy temples found on the banks of River Cauvery” – the priest tells us, “the other two being at Srirangapatna and Trichy. The idol of Lord Vishnu is in reclined posture in all these temples. The road was smooth, the rough experience being avoiding the numerous groups soliciting donation for the forthcoming Ganesh Puja. At some places these groups almost put up a human barricade.

According to legends and folklore the town once had 30 temples. Many of these temples  are believed to be still buried in sand. Today the prominent temples include the five temples dedicated Lord Shiva together known as Panchalingam. They are  – Pathaleshwara, Maruleshwara, Arkeshwara, Vaidyanatheshwara and Mallikarjuna. The Panchalingam Darshan fair, held here every 12 years, attracts a large number of pilgrims. Special rituals are carried out during this fair, which was last held in 2009. Two temples Ānandēsvara and Gaurisankara were unearthed in 1910. Talakad is also  one of the Pancha Narayana Kshetrams where the Keerthi Narayana temple was established by Sri Ramanujam.

The temples of Vaidyanatheshwara Swamy, Pathaleshwara Swany, Maruleshwara Swamy, Chaudeswary Amma Temple and the Gokarneshwara Pushkarini are joined by a walking track around a sandy hillock. We enjoyed the walk barefoot, even though one can use footwear on the track. 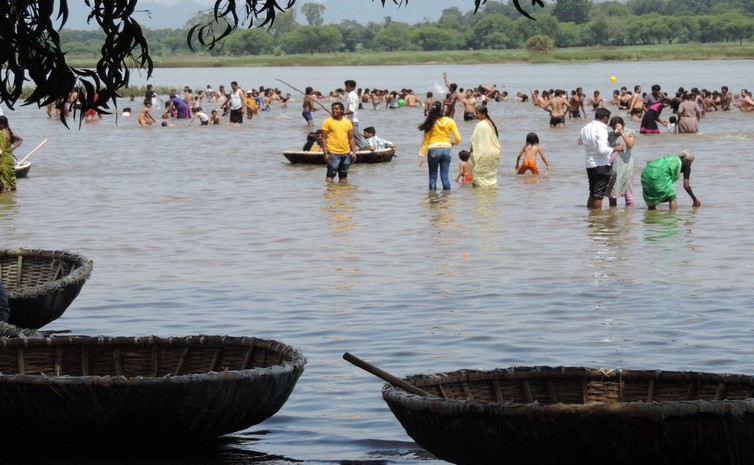 Legend has it that the town owes its origin to two hunter twins Tala and Kadu. Some believe that in Tretaya  Yuga, Lord Rama during his journey to Lanka halted here. Talakad was also the  capital of Ganga Kings and it was part of different powerful dynasties of South India.

The three mysterious happenings – sand covered landscape of Talakad, the whirlpool at Malangi and the fact that the Kings of Mysore have failed to get natural heirs – have been attributed in folklore to the Curse of Talakad. It is said that these curses were uttered by Rani Alemmellu of Srirangapattanam before drowning herself along with ancestral jewelry in the Kaveri river here, in response to the news of her husband’s death and the ulterior motive of the king of Mysore to lay hold of the Jewelry. 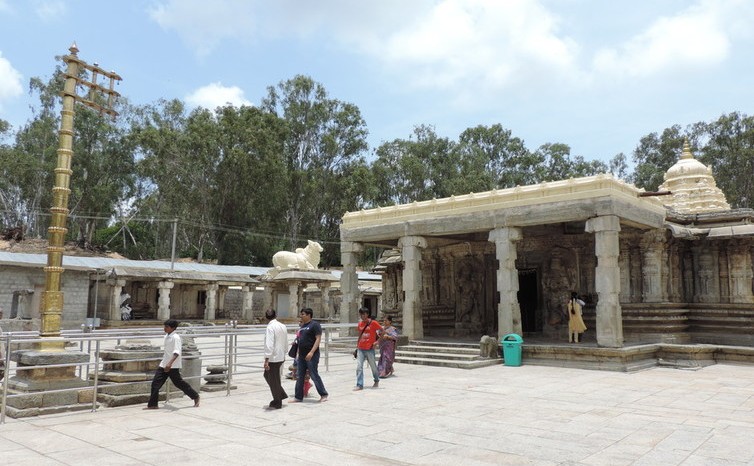 The Cauveri Water Front is near the Vaidyanatheshwara Swamy temple. One can take a dip and enjoy playing in shallow Cauvery water or go on a gondola ride. The water is muddy. One has also to be careful if one is walking barefoot on the shore as broken glass pieces (left by the booze revelers) can be found at many places. Nevertheless, the visitors were on a festive mood, being away from the hustle and bustle of the city life. Whenever I find an opportunity to swim or take a dip in any water body, my child hood memories haunt me. I just cannot resist the call of the water. In no time we lost ourselves  among the crowd reveling in the muddy static Cauvery waters jumping, swimming, splashing water at one another, throwing mud and soft ball, and exploring a little more of the cursed Cauvery of Talakad.

We were in no mood to come back. But the setting sun sent the warning bells that I have to come back to Bengaluru so as to be in the office the next day. In contrast with our journey in the morning, the thick traffic on our return journey made our pace slow. My co-passengers advised to have patience with the traffic. We decided to take a break again at Kanakpura for a simple dinner, so that we hit the bed straight away when we reached home.

From the culturally rich and diverse land of Orissa, Durga Prasad Dash is a travel enthusiast, a passionate writer, and a yogi. All thanks to his previous job in Indian Air Force, he been to almost every part of India, but his lust to explore new places and adventurous spirits are never ending. He loved to learn about different cultures and lifestyles and inspires other for the same through his writing. To know more about his travel stories, check out his blog